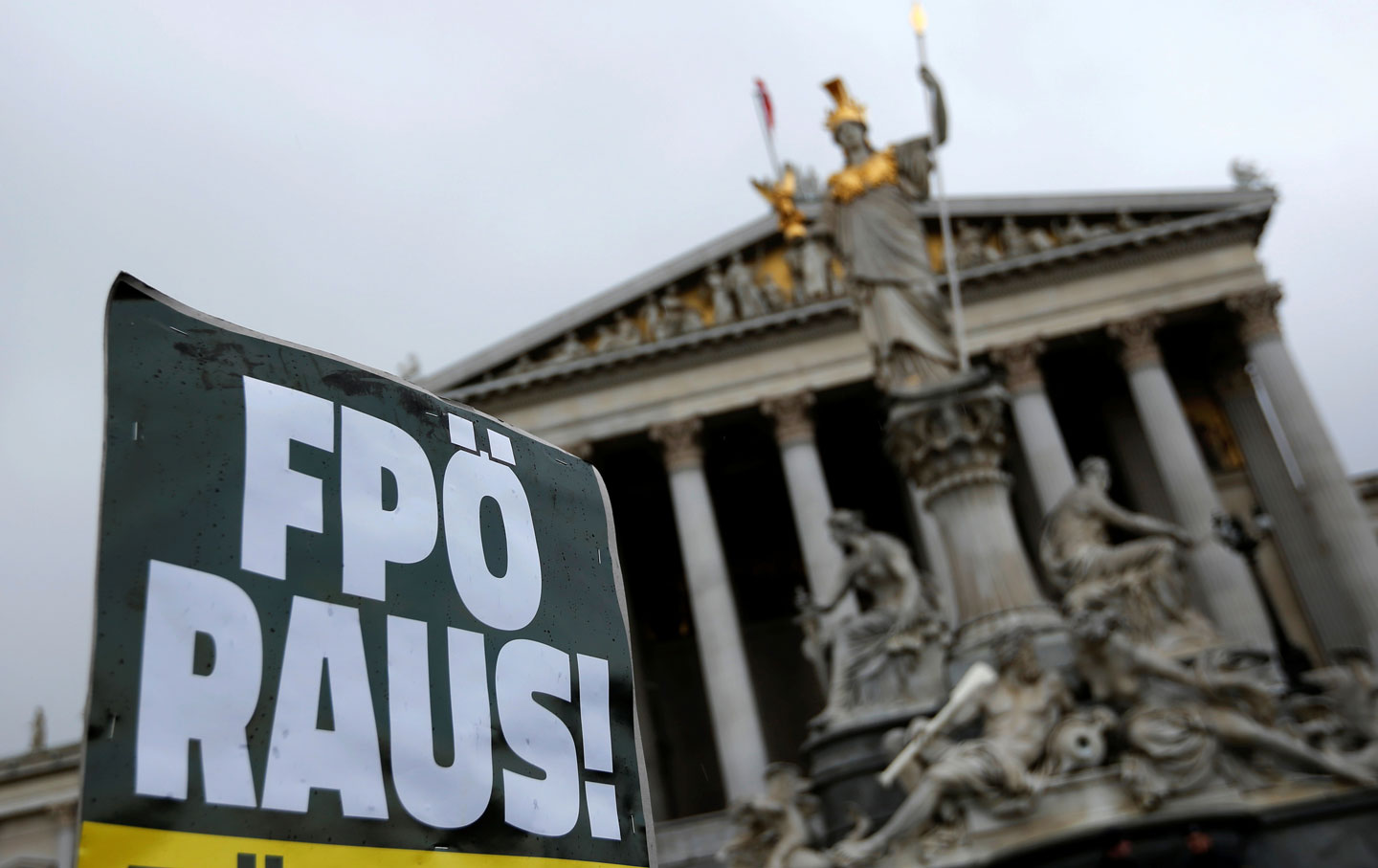 A protestor holds a sign reading “FPO out” during a protest for a better asylum law in front of the Parliament in Vienna, Austria on April 25, 2016. (Leonhard Foeger / Reuters)

You know you’re living in a bubble when no one you know voted for the far-right candidate and everyone’s astonished when he wins. From my Viennese friends and the cheery young Greens handing out campaign literature at the upscale Karmelitermarkt farmers’ market to the international scholars at Vienna’s Institut für die Wissenschaften vom Menschen (where my husband is a fellow this year and I am a guest), everyone I spoke with before the first round of the Austrian presidential elections on April 24 confidently predicted victory for the Green candidate, Alexander Van der Bellen, who ended up with 21 percent. The first-place finish of Norbert Hofer of the far-right Freedom Party (35 percent) came as quite a shock. But then, living in Vienna, a multicultural world capital that has been governed by the Social Democrats for the last 71 years, one can easily lose track of the rest of Austria. In fact, one can lose track of the rest of Vienna—last fall, the Freedom Party received 31 percent of the mayoral vote.

In retrospect, even the election posters of the two leading candidates foretold the story. Van der Bellen, a 72-year-old economist, looks rumpled, friendly, curious, and a bit wistful—clearly a member of the intelligentsia down to his stubbly salt-and-pepper facial hair and rimless glasses. His slogans were modest and calming: “Toward better knowledge and conscience” and “Let’s go together a piece of the way.” I loved him instantly, but then I would. His opponent, 45-year-old Hofer, fan of guns and scourge of immigrants, looks confident, energetic, and all business in a sharp suit and tie. His urgent, hectoring slogans are frankly nationalistic: “Your Homeland needs you NOW.” “Always again, Austria.” And what about that blue cornflower he wears in his lapel? Hofer claims it’s merely an old symbol for rural Austria—and in the color typology of Austrian politics, the Freedom Party is blue. Be that as it may, the sweet little cornflower has a dark history here: From 1933 to ’38, when the swastika was banned in Austria, the Nazi Party’s sympathizers wore cornflowers instead. The United States, it would seem, isn’t the only country where dog-whistling is a fine political art.

It would be foolish to map US politics onto those of Austria, but there’s some food for thought here.

The Freedom Party was franker about its political leanings back in the 1990s, when it was run by neo-Nazi Jörg Haider, who, among other notorious remarks, said the SS deserved “every honor and recognition.” These days, it’s subtler: think Marine Le Pen’s National Front as opposed to her father’s. It’s part of a wave of “populist” ethno-nationalist parties that are doing well all over Europe: in Poland, Hungary, Slovakia, France, Germany, Denmark, Sweden, the Netherlands, Greece, and, don’t forget, in Britain, where conservatives are pushing for “Brexit.” Some of these countries have indeed seen a massive influx of migrants and refugees; others, like Poland and Slovakia, have been unaffected and wish to keep it that way. Last summer and fall, hundreds of thousands of Syrians, Iraqis, Afghans, and others entered Austria. Most were on their way to Germany and Sweden; only some 90,000 stayed, which in a stable, well-run, prosperous country of 8.5 million seems manageable— or would if you didn’t read the tabloids, with their daily reports of sexual abuse, wife-beating, rape, and even murder involving immigrant suspects.

It would be foolish to map US politics onto those of Austria, but there’s some food for thought here. Resistance to immigration fueling conservative extremism? Check. Disgust with “bureaucracy” and politics as usual? Check. The Social Democrats and the conservative Austrian People’s Party, which have dominated politics here since World War II and currently govern in coalition, each received only 11 percent of the vote—far less than the 19 percent won by Irm­gard Griss, a retired Supreme Court judge who ran as an independent. Huge gender gap? Check. The Freedom Party received 44 percent of the male vote but only 28 percent of the female vote; women went for Griss and the Greens. Hofer got a whopping 64 percent of the working-class vote. Comparisons to Donald Trump may be in order.

No wonder there were a lot of long faces at the Social Democrats’ May Day rally in Rathausplatz, where attendance was down by almost half from last year; Werner Faymann, the party leader and Austria’s then-chancellor, was booed and heckled. The young party worker manning the water-bottle table described Faymann to me as a “Kasperl” (clown) and predicted that in a few years the Freedom Party would be running the country. He blamed the Social Democrats’ problems on poor leadership: After initially welcoming immigrants, Faymann reversed course and did his best to keep them out. What’s that Bible verse Republicans like to quote about an uncertain trumpet? Although he put up a bold front, a few weeks after the election, Faymann stepped down.

One thing the Austrian election was not about, though, was austerity. The government here provides an array of social benefits that make Bernie Sanders seem like Scrooge: universal healthcare, generous parental leave, free public higher education, regular payments to help with raising a child, home visits from nurses for the elderly. Even conservative Austrians want a generous welfare state and the social solidarity it implies—but, increasingly, they don’t want to extend that solidarity to new arrivals. It’s easy to find people who claim that previous immigrants—East Asians, ex-Yugoslavs—blended in, but that this bunch is different. Because they are Muslim? Brown? Mostly unattached young men? The tabloids also play up the ongoing saga of Muslim kindergartens where little girls wear hijabs, to say nothing of frequent reports of terrorist plots foiled just in time. Integrating immigrants might be an easier sell if jobs were plentiful, but they’re not. The unemployment rate is 10 percent.

The runoff between Hofer and Van der Bellen is set for May 22. Ever hopeful, everyone I know thinks the Greens have a good shot.