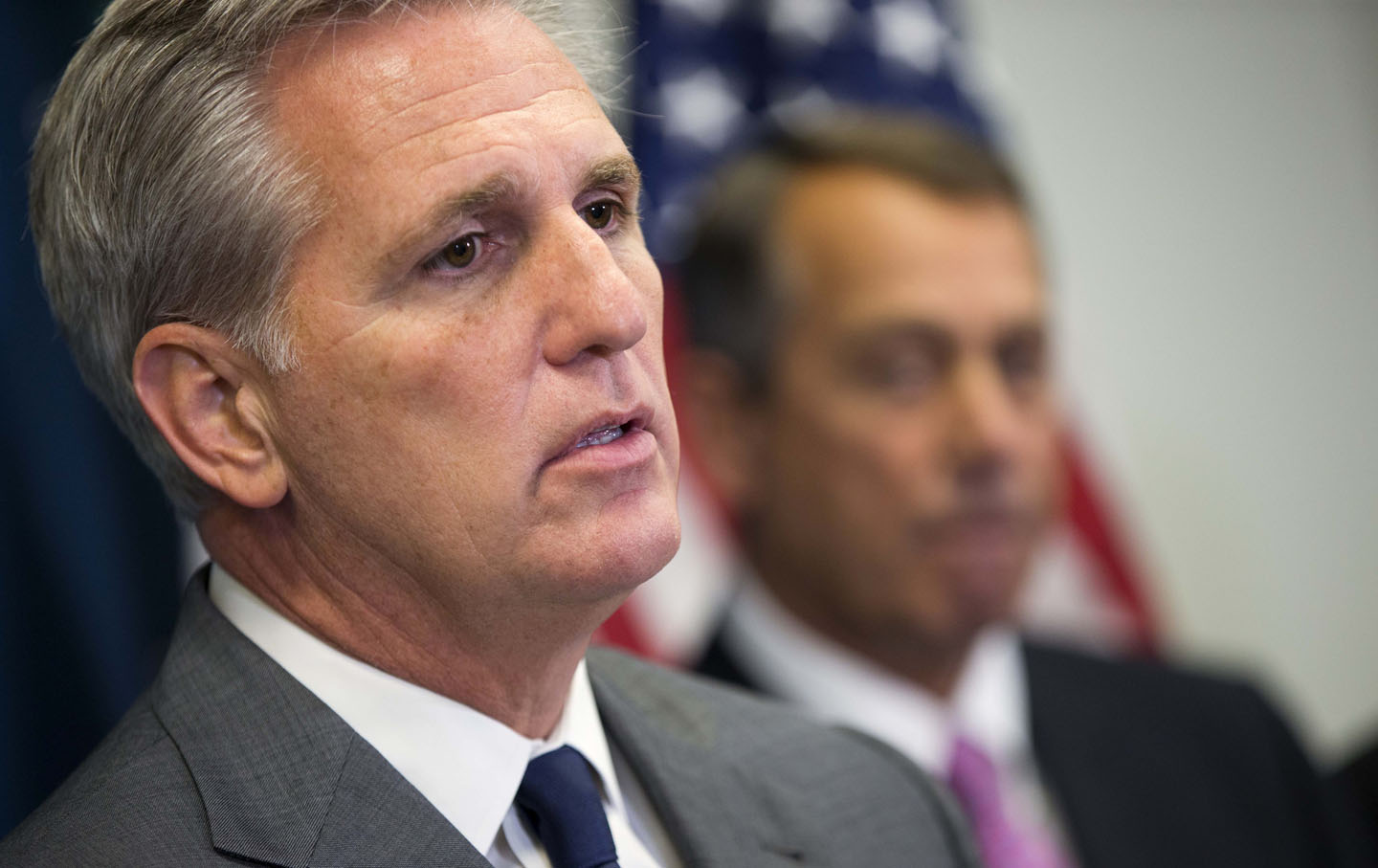 House majority leader Kevin McCarthy’s abrupt exit from the race for the House speakership, coming shortly after John Boehner’s only slightly less abrupt decision to quit the job, confirms that the Speaker’s post as defined by the House Republican Caucus is no longer meaningful and that this Republican-led House of Representatives is no longer functional.

These two realities, even if they are rarely acknowledged by political and media elites, tell us more about the sorry state of the Republican Party than anything that is happening in an awkward and unsettling race for the party’s presidential nomination.

A party that once engaged in the hard-work of governing—with a sense of responsibility, and often with success—is now so at odds with the very idea of functional governance that it struggles to contribute anything more than the word “no.”

Boehner’s plan to exit at the end of October, and McCarthy’s inability even to pick up the outgoing Speaker’s broken baton, represents another triumph for an extremist inclination that has redefined the party’s congressional and presidential politics. This inclination is more anarchical than traditional, more cutthroat than conservative.

It does not really matter who wins what Congressman Tim Huelskamp, R-Kansas, calls a “brand new race for speaker.” The Republican Party’s mayhem has become so debilitating that the mayhem now defines the position more than the occupant.

The Grand Old Party has become the Party of Chaos.

The Grand Old Party has become the Party of Chaos. And the extent of that chaos—as evidenced by the inability of its House caucus to manage the speakership—offers a profound measure of the extent to which the Republican Party has abandoned its founding promise and its historical mission.

The first Republican speaker of the House, Nathaniel Prentice Banks of Massachusetts, took charge of the chamber less than two years after the founding of the party and immediately shook up the politics of the country by installing anti-slavery congressmen in key positions. In the most contentious of times, however, he operated as a man of the House, working with all factions, encouraging open debate and generally making the chamber work. Indeed, former Speaker Howell Cobb, a Georgia Democrat with whom Banks had no agreement on the critical issues of the day, said the Republican was “in all respects the best presiding officer [the House] had ever seen.”

The Republicans Speakers who followed Banks tended to operate as men of the House, which made a good deal of sense, as Republicans were from the Civil War era to the time of the New Deal a steady (if not constant) “natural party of government.” That did not mean that these speakers were invariably perfect, nor invariably appealing, men. They were often conservative; yet they tended to be more enlightened than the Southern segregationists and big-city machine Democrats with whom they had to contend. They made the House work, every bit as well and it some case better than did the Democrats.

There’s a good deal of evidence that Boehner would have liked to govern in that style, and that the hapless McCarthy might have been similarly inclined.

But those days are gone.

McCarthy’s collapse, which included a disastrous introduction to America as a hyper-partisan who effectively acknowledged the political purpose of the targeting of Hillary Clinton by the House’s select committee on Benghazi, is less worthy of attention than the decision of Boehner to quit.

McCarthy should never risen as high as he did in the House caucus, and he could never have been an effective leader. That’s why he is out before he got in.

Boehner, though hardly a giant in congressional terms, is a different story. He is a more consequential figure than McCarthy, and his surrender reveals the extent of the chaos and the crisis that the GOP is now experiencing.

A product of the Ohio legislature in the 1980s, when Midwestern Republicans retained the “build-big-things” and “build-big-coalitions” mentality of governors such as Ohio’s Jim Rhodes and Michigan’s William Milliken, Boehner was a genuine social and economic conservative. But he accepted that conservatives had to operate on an ideological spectrum and within legislative chambers that  functioned only if Republicans and Democrats had the freedom to cooperate. After his election to Congress in 1990 (when he beat a conservative icon who had gone off the rails, Donald “Buz” Lukens, a wild and contentious primary that I had a chance to follow closely as a young reporter for the Toledo Blade), he quickly moved into House leadership.

But the House was changing. And, more importantly, the Republican Party was transforming into something its founders and defenders over more than a century and a half could not recognize.

The Grand Old Party had actually been teetering on a chaotic cliff for a long time—as has American conservatism. William F. Buckley jettisoned the old-right values of a previous conservative Republicanism and ushered in the new era with a 1955 declaration that “A conservative is someone who stands athwart history, yelling Stop, at a time when no one is inclined to do so, or to have much patience with those who so urge it.” By the early 1960s, this new right was busy discarding the trappings of the successful “modern Republicanism” of Dwight Eisenhower. Indeed, it would move so rapidly that even Buckley found himself contending against the extremists of the John Birch Society and the far right in struggles to define the GOP.

After the Goldwater debacle of 1964, Buckley and the somewhat cooler heads prevailed in the late 1960s, making a difficult peace with the likes of Richard Nixon and House Republicans such as Gerald Ford. But with the rise of the “new right” in the late 1970s and early 1980s, the party began veering toward a politics defined by a line from Ronald Reagan: “government is not the solution to our problem; government is the problem.” Reagan prefaced those words with a qualifier “in this present crisis,” and actually proved to be far more committed to functional governance than his critics expected. But Republicans who imagine themselves to be heirs of Reagan now promote a politics that is not just antigovernment but anti-governing.

John Boehner, as chairman of the House Republican Conference in the 1990s (when former Speaker Newt Gingrich was beginning to blow things up), as House minority leader, as House majority leader and finally as House Speaker since 2011, was no hero. He played along with obstruction-obsessed extremists, sometimes with the false bravado of a leader who is actually following, often grudgingly. He never could serve fully as Speaker because he was saddled with the draconian “Hastert Rule”—an informal but often very real requirement outlined by former Speaker Dennis Hastert (an acolyte of wrecking-crew partisan former House majority leader Tom DeLay) that shifts control of the House agenda from the Speaker to the House Republican Caucus. Under the Hastert Rule, a Republican Speaker cannot allow a floor vote on legislation unless a majority of the Republican Caucus backs it.

The Hastert Rule prevents coalition building between responsible Republicans (and there are still a few) and Democrats, meaning that a determined right-wing minority—elected from heavily gerrymandered districts and making up little more than a quarter of the total membership of the chamber—can effectively control the flow of legislation, the debate, and the character of the House.

Under the Hastert Rule, Republican Speakers of the House become no more than caucus leaders with fancy titles. And, in the case of a weak Speakers like Hastert and Boehner, they are a little less than that, as they have often lacked the “pull” to lead the partisans in the caucus.

Boehner bristled as the Hastert Rule, violating it at critical points and working around it where possible. But as the extreme right angled for another shutdown of the federal government this fall, he was faced not only with the frustrations of the speakership but with the threat that he might be deposed.

But the greater surrender is that of the Republican Party. It has given up on a premise as old as the party itself: that Republican Speakers (like the best of Democratic Speakers) would lead the whole House and seek to keep the chamber functioning. John Boehner made a less-than-sufficient effort to be a Speaker of the whole House, and he need not be portrayed as any kind of hero. But his tepid regard for governing was too much for his caucus. And for a party that has no real need for a Speaker of the House because it has lost interest in what Republicans historically understood as governing.

John Nichols is writing a history of the Republican Party, which will be published by The New Press.