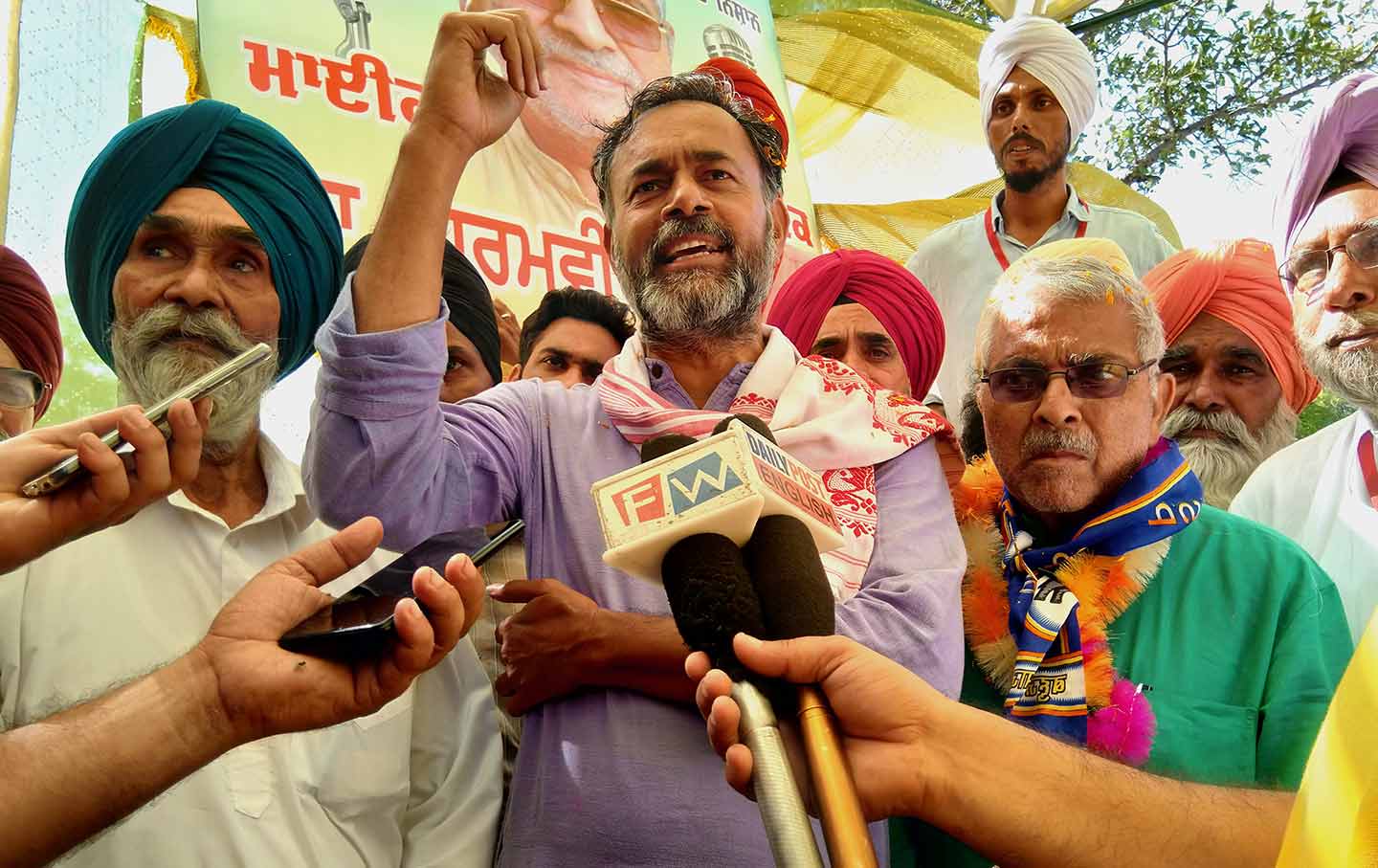 Yogendra Yadav campaigns with third-party candidate Dharamvir Gandhi on the outskirts of Chandigarh, India. (Courtesy of the author)

Last December, Yogendra Yadav, the leader of the left-wing Swaraj India Party, published an open letter addressed to the Indian public ahead of the country’s upcoming general election. Part warning and part call to action, “This is not just a letter. It is a call from the heart,” it read. “It’s a call to change the destiny of our nation. I write because it’s not yet too late. I write because there is not much time.”

The letter criticized the government’s sectarianism while highlighting issues of growing agrarian distress and skyrocketing unemployment rates. “The equation for 2019 is clear,” Yadav wrote, explaining that Indians must choose between dividing the country on the basis of religion, or addressing the common problems faced by the country’s farmers and youths.

Because of Prime Minister Narendra Modi’s hostility toward left-wing politics, dissent of this sort has been rare in recent years. And like Donald Trump or Brazil’s Jair Bolsanaro, Modi and his ruling Bharatiya Janata Party (BJP) have chipped away at India’s democratic institutions: sabotaging the Supreme Court bid of judges who have ruled against party leaders; threatening and strong-arming the resignation of journalists critical of the regime; and appointing right-wing ideologues to key university positions—all while rewriting primary- and secondary-school textbooks to obscure Islamic contributions to the country.

This assault on Indian democracy has made it difficult for any of Modi’s critics to speak out, but Yadav has nonetheless managed to make a name for himself as an activist. In October 2017, he organized a protest against the murder of journalist Gauri Lankesh by Hindu extremists. Last July, in what is now familiar practice against Modi’s critics, the country’s Income Tax Department raided a hospital run by Yadav’s sister. “[The] Modi regime now targets my family… search me, my home, why target my family?” he appealed on Twitter.

Yadav’s letter announced his next action. He would not contest the upcoming general election—at least not in the traditional sense, by running himself, as he had in Delhi’s sister city, Gurgaon, in 2014, or fielding candidates from his party. Instead, he asked volunteers to join him on a campaign called “Indian Citizens’ Action for Nation” to help mobilize voters and set an agenda of progressive issues for the election.

Along the lines of Our Revolution, the movement inspired by Bernie Sanders’s 2016 presidential bid, Yadav’s campaign, known as ICAN2019, aimed to revitalize progressive politics in India by helping left-wing candidates run in the country’s general election. (In India’s parliamentary system, voters elect representatives; the party with the most MPs then picks the country’s prime minister.) The campaign has close to 50 candidates across the country: a modest attempt at creating an alternative to the country’s two-party system.

Tall and bearded, he has the stature of a revolutionary and the demeanor of an enthusiastic civics professor. Addressing a group of volunteers on Google Hangouts last January, he asked the students among them to focus on their studies before devoting their time to activism. “But if you can spare time, please join ICAN,” he appeals. “That’s the way you can make a difference to the way your country is being run.”

Before going into politics, Yadav was a regular on India’s broadcast pundit circuit as a political pollster—think Nate Silver, if Silver moonlighted as the leader of the anti-Trump resistance. A political scientist by trade and founder of a prestigious research program in comparative democracy, in the mid-2000s, Yadav also served as an adviser to India’s current opposition leader, Rahul Gandhi, of the Indian National Congress. (This year, he’s rejected Gandhi’s bid for the premiership, calling his coalition “hollow” and “lacking ideology.”)

Yadav also co-founded the anti-corruption Aam Admi Party (AAP) in 2012 after millions of Indians demonstrated across the country in support of a national anti-corruption bill. The AAP won Delhi’s assembly elections in 2013, but by the next year, the party’s leader, Arvind Kejriwal, was accused of consolidating power for himself. As a result, the AAP lost more than 80 percent of its volunteers, and after publicly criticizing Kejriwal in 2015, Yadav was excommunicated. He founded Swaraj India the following year alongside another exile, Prashant Bushan.

These days, when he appears on broadcast television, news anchors jokingly chide him to take off his politician hat before asking for poll predictions. But the real Yadav is hatless; he wears an embroidered scarf called the gamacha from the Indian state of Assam, which he says is to fend off the “oppressiveness” of indoor air-conditioning systems. Yadav also wears the scarf while campaigning in 100 degree weather, and had it on when we met on the campaign trail in the Indian state of Punjab, five days before the penultimate day of voting in India’s staggered election. It’s become his trademark: “It’s a very functional scarf,” he says.

On May 8, I waited with Yadav outside a gas station in rural Punjab 20 miles outside the state’s capital of Chandigarh, as he prepared to campaign for one of the candidates chosen through the ICAN2019 process—another AAP exile named Dharamvir Gandhi. It was the start of what’s known in India as a “road show”: Since Indian politicians must address constituencies spread over large geographical areas during relatively short campaign periods, political leaders travel through their districts campaigning from the top of a vehicle, usually the back of a pickup truck, while a caravan of sedans and auto-rickshaws fitted with megaphones and posters follows.

“We are a small organization,” Yadav told me. “We could either invest all our energies in one or two constituencies and try and win them or we can refocus our attention on getting this election back to focus on the real issues.”

Soft-spoken, Yadav sounded hopeful about his campaign. He told me the goal of the ICAN movement is to develop an alternative coalition that will maintain a commitment to a progressive platform valuing transparent governance, democracy, and secularism. “For us, future politics is not something that’s going to come from people sitting in Delhi,” he said. “India is a very large country and the solutions have to come from different parts. So we have to look for persons and parties that are rooted on the ground.”

A small motorcade formed outside the gas station, and before long, Yadav joined Gandhi on the back of a pickup truck converted into mobile stump. The two went on to travel through villages and towns to the state’s capital waving, shouting slogans, and throwing pamphlets. Trailing behind them was an auto-rickshaw strapped with a loudspeaker playing a Punjabi jingle asking people for their vote.

Yadav describes himself as a democratic socialist: a political tradition that in India goes back to the US-educated Indian independence activist Jai Prakash Narayan. In 1934, Narayan started a short-lived caucus within the Indian National Congress called the Congress Socialist Party, which advocated for wealth distribution and income equality alongside democratic governance. When Yadav talks of economic inequality in India, he sounds like a wonkier, less cranky Bernie Sanders. “The larger economic order ensure that whatever development happens go to a very small number of the 1 percent or 2 percent.”

Confusingly, Yadav hesitates to call Swaraj India a democratic-socialist party. Instead, he views the party as an umbrella for various Indian progressive movements from the Ambedkarites, a movement that advocates for the annihilation of the caste system, to the feminist movement. “What we need is a new ideological synthesis for the 21st century—Swaraj India can be described as a search for this new synthesis,” he says. During the ICAN campaign, the party supported candidates ranging from a member of the far-left Communist Party of India (Marxist) to local activists and celebrities entering politics for the first time.

This means that, functionally, Swaraj India falls somewhere between political party, think tank, and activist collective. What it lacks in electoral power it has compensated for by raising awareness on key electoral issues. In February, Yadav and Bushan, alongside other Indian public intellectuals, drafted an 11-issue plan titled “Reclaiming the Republic” to tackle problems ranging from protecting minority rights to electoral reform. The manifesto grabbed the attention of other parties, including the BJP’s main opposition, the Congress Party. Swaraj India used the 5,000 volunteers it had amassed to promote the manifesto on social media.

Yadav has also organized protests about Modi’s foreign policy. In February, a terrorist attack in Indian Kashmir gave the BJP a chance to divert attention from growing criticism of its domestic policies by launching an air strike into Pakistan. In response, Swaraj India launched an anti-war campaign on March 23, celebrated as Martyrs Day in the country, in honor of three independence activists executed in Lahore by the British government in 1931. Protesters formed human chains around statues and symbols of martyrs across the country under the banner, “My Country, My Vote, My Issues,” calling the election back to the country’s domestic problems.

This helps explain why Yadav found himself ensnared by the ruling party’s propaganda machine. After a heated debate with Yadav on broadcast television, the head of the BJP’s social-media campaign tweeted a doctored video of Yadav telling the story of his birth name, Salim, to a predominantly Muslim audience, accusing Yadav of pandering to Muslims for political gain.

Yadav later explained that his father had resolved to give his children Islamic first names after seeing his own father killed by a Muslim mob. He changed his name to Yogendra at the age of 5 after answering one too many questions about why a Hindu boy should have a Muslim first name.

The BJP operative had cut a crucial portion of the video in which Yadav tells the crowd that by giving him the name Salim, his father expressed the desire that Yadav would be neither “a Hindu nor a Muslim, but a human being.”

“When are you withdrawing from public life?” they taunted.

As Yadav and his entourage drove through rural Punjab, their pink pamphlets flew like confetti into nearby wild hemp fields and sunflower farms. There was hardly anyone outside to collect them. “I would be pleasantly surprised if more than two or three manage to win,” he said, of their prospects, when we spoke after the road show. “I’d be disappointed if none of them win.”

“Winnability was not a criterion for us,” he says. “We have supported candidates that everyone knows are not going to win.” I asked him whether such an admission runs counter to his warnings about this election being a “battle for the soul of the republic” and defeating the BJP’s majoritarian agenda.

Yadav sees the ICAN campaign as an opportunity to sow seeds for the future. “We were only concerned about the quality of the candidate rather than their potential to win this time.”

He mentions that the campaign did take into account the possibility of indirectly benefiting the BJP, like Ralph Nader’s infamous third-party candidacy in 2000, and so Yadav chose to abstain from running in this year’s election.

The true test of Swaraj India’s alternative coalition will happen after the election results are announced this Thursday, May 23. During the first week of June, the party will organize its first formal meeting to plot out how it will handle what will likely be five more years of Modi. “The battle for saving the republic—it’s a long-term battle,” Yadav tells me, “But creating genuine alternatives and supporting genuine alternatives, if we don’t start now, next time it might be too late.”