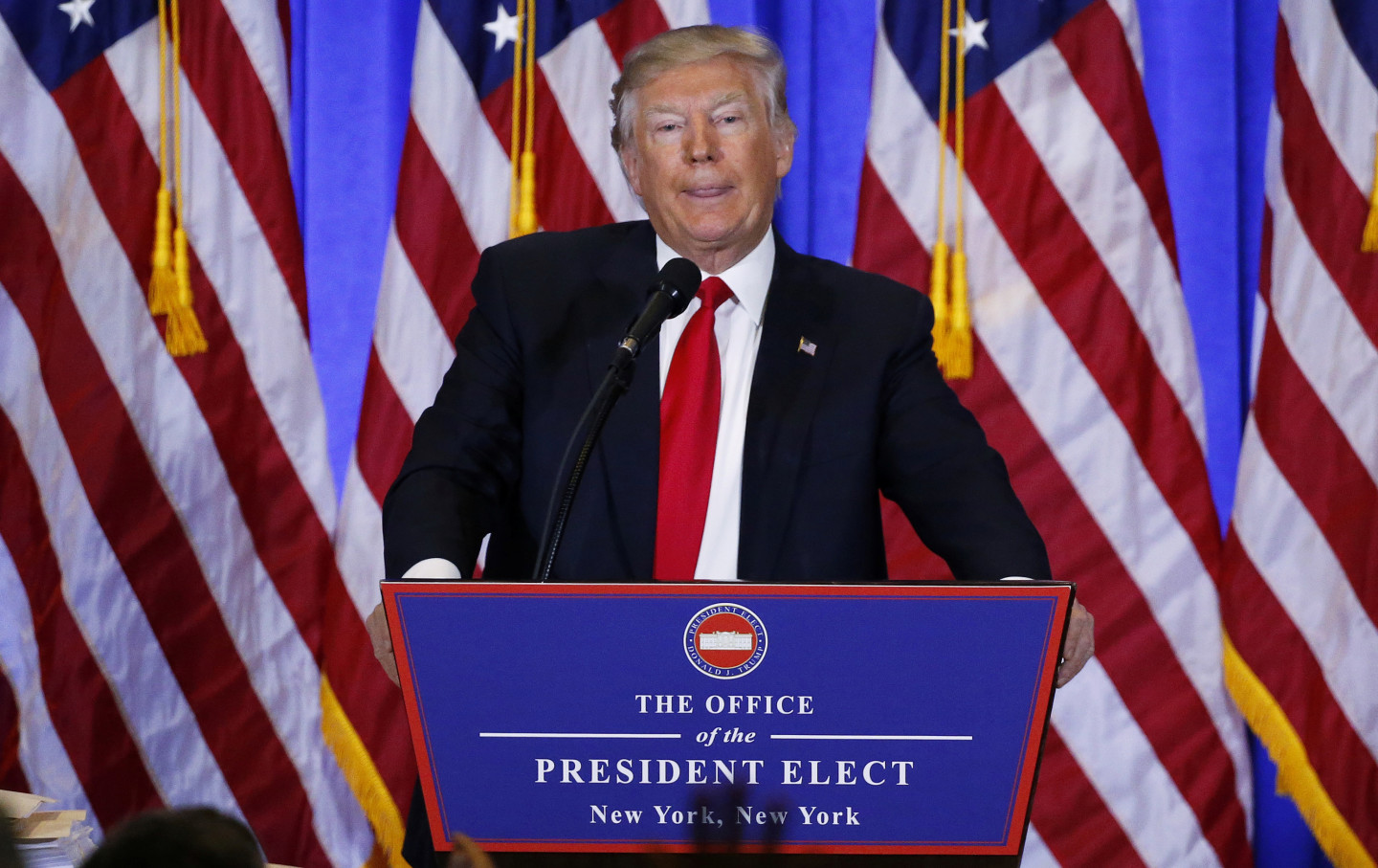 At Donald Trump’s press conference this week, his lawyer described how, as president, Trump will try to avoid conflicts of interest. He will put all of his business interests in a trust run by his sons and an associate. The Trump Organization will make no new deals with foreign governments. Using a test not yet described, an ethics adviser will have to approve new deals with everyone else. Trump will not be informed about them. Trump will donate profits his hotels earn from foreign governments to the US Treasury. “In sum,” the lawyer argued, “all of these actions—complete relinquishment of management, no foreign deals, ethics adviser approval of deals, sharply limited information rights—will sever President-elect Trump’s presidency from the Trump Organization.”

These baby steps are inadequate, no doubt because Trump was unwilling to let his lawyers promise more. So where’s the good news?

Trump repeatedly reminds us that he does not have to promise anything. The conflicts statute does not apply to him. The Constitution’s Emoluments Clause does apply, but its scope is unclear. It forbids accepting “any present, Emolument, Office, or Title, of any kind whatever, from any…foreign State.” Does that language cover arm’s-length transactions or a foreign diplomat’s hotel stay at standard rates? We don’t know, because the courts have never construed it. And they likely never will. No one has standing to go to court. We are left with competing arguments based on an inconclusive 18th-century text.

The good news is not in the package Trump offered but in the fact that he offered anything at all. Public displeasure with Trump’s conflicts forced him to act in ways that he would have preferred to avoid. We have learned that public opinion can pressure Trump just as it pressured the House of Representatives to reverse itself on ethics enforcement. This is some comfort for the battles to come.

The first gap in Trump’s plan is the lack of transparency. It asks us to trust the Trumps and those who work for them and who sign confidentiality agreements. Trump’s tax returns would help here, but Trump won’t release them. His reason—he is under audit—is transparently false and insults our intelligence. Trump won’t even release the form letter proving that he is under audit. And why does an audit even matter? Releasing tax returns will not interfere with one. The IRS doesn’t care.

Trump’s plan has a second gap. While it proposes to create an information barrier between Trump and the Trump Organization, he will continue to share in the profits. There is no profits barrier. The idea seems to be that if Trump does not know where the money is coming from, he can’t be influenced by the fact that he’s getting it. But even with an information barrier, assuming we can trust it, Trump knows the business of the Trump Organization. He knows its current deals and its current ties to foreign governments. This knowledge, as his lawyer said, is why a blind trust would be ineffective. Blind trusts work for liquid assets, not buildings and brands. Trump can’t “unknow” what he knows. And while new deals may be hidden from Trump before they are entered, many will become public, as his lawyer also acknowledged.

Trump should cash out. He should sell his stake in the company. That would not be as hard as his lawyer claimed. But he won’t do it, and Congress is not about to force him. There is, however, something else Congress can do.

The conflict-of-interest statute says that an officer or employee of the executive branch may not participate “personally and substantially” in any matter in which he has “a financial interest.” A person who violates the statute can be prosecuted and fined up to $50,000 for each violation or (if greater) ordered to pay the government “the amount of compensation which the person received…for the prohibited conduct.” This is called disgorgement. By taking the profit out of self-dealing, it ensures that a person in a position of trust acts in the best interests of his employer, which here is the United States, not in his own interest.

Exempting the president from the conflicts law makes sense as a general policy. You can have a substitute attorney general or SEC chair for a particular decision, but we do not want a substitute president. What is indefensible, however, would be to allow the president to profit from a conflicted decision. So while the president should be exempt from the conflicts statute, he should not be exempt from its disgorgement remedy. He should be treated like everyone else who works for the United States. Not even presidents should be allowed to self-deal. Especially not presidents.

Congress can pass a law that requires the president to give his annual tax return to a congressional committee. If after investigation the committee concludes that any income is likely a product of a conflicted decision, it should refer the matter to the attorney general, who is responsible for enforcing the conflicts law. If the attorney general does not seek disgorgement and is unable to defend that decision, Congress should cause the appointment of an independent counsel who, barring a settlement, will seek disgorgement in a court proceeding open to the public.