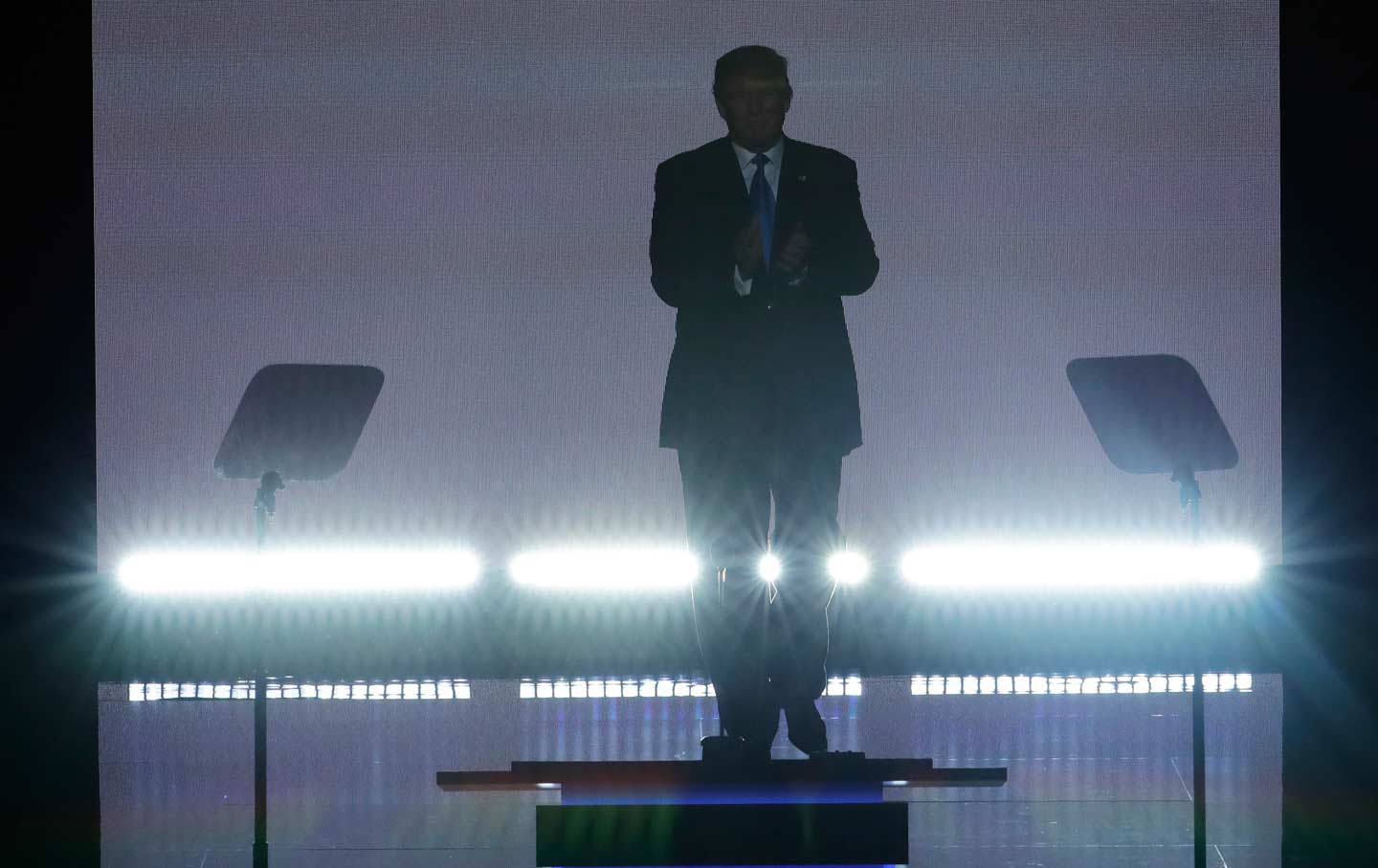 Donald Trump steps to the podium to introduce his wife, Melania, during the opening day of the RNC in Cleveland, July 18, 2016. (AP Photo / J. Scott Applewhite)

Cleveland—Before the Republican National Convention approved what right-wing delegates described as “the most conservative platform in modern history” on Monday, platform-committee co-chair Virginia Foxx announced that the document was “a reaffirmation of the principles America and the Republican Party were founded on.”

The platform is theocratic in its language and spirit, employing arguments never before considered by a major American political party. It’s extremism is such that People for the American Way’s “Right-Wing Watch” team has observed, “Four years ago, we called the GOP platform ‘a far-right fever dream, a compilation of pouting, posturing, and policies to meet just about every demand from the overlapping Religious Right, Tea Party, corporate, and neo-conservative wings of the GOP.’ Yet this year’s platform is even further to the right.”

Yes, the platform has its Donald Trump flourishes. As the New York Times editorial board notes: “Mr. Trump’s anti-Muslim phobia and fantasy wall across the Mexican border are front and center, along with his protectionist views, which deny long-held positions of the party.”

But where the platform veers furthest to the right is in sections that champion precisely the mingling of religion and politics that worried not just the wisest of the founders of the American experiment but also the Republicans of another time—who sought to advance and enhance that experiment.

Trump and his aides made no serious effort to temper the most extreme platform writers.

Congresswoman Foxx did not seem to recall Thomas Jefferson’s observation, as the third president of the United States, that “Believing with you that religion is a matter which lies solely between Man and his God, that he owes account to none other for his faith or his worship, that the legitimate powers of government reach actions only, not opinions, I contemplate with sovereign reverence that act of the whole American people which declared that their legislature should ‘make no law respecting an establishment of religion, or prohibiting the free exercise thereof,’ thus building a wall of separation between Church and State.”

In his letter to the Danbury Baptists, the third president wrote of the separation of church and state as an “expression of the supreme will of the nation in behalf of the rights of conscience.”

The Republican Party at its founding adopted similar language, referring at the close of its 1856 platform that the new party sought to build a broad movement of Americans “believing that the spirit of our institutions, as well as the Constitution of our country, guarantees liberty of conscience and equality of rights among citizens.” Egalitarian and pluralistic values were embraced and celebrated by Republicans throughout most of the party’s history. Sixty years ago, Dwight Eisenhower was reelected on a platform that declared that “liberty, due process and equal protection of the laws… is an unqualified right, regardless of race, creed or color.” Shortly after his reelection, in a speech at the Islamic Center of Washington, Eisenhower spoke of Americans as a people “faithful to the demands of justice and of brotherhood, each working according to the lights of his own conscience.”

The 2016 GOP platform drafters have done their best to break down America’s wall of separation—and their own party’s regard for pluralism—with a document that is a good deal more aggressive in its language and its proposals than past platforms. It is not news that the Grand Old Party has become socially conservative; decades ago, the party abandoned its historic support for an Equal Rights Amendment and began to outline extreme opposition to reproductive rights. But this platform is more ambitious in its embrace of the themes, programs, projects and policies of the right-wing evangelical Christians who have become a powerful force in the modern GOP. The first paragraph of its section on “A Rebirth of Constitutional Government” mentions God a half dozen times and avers that “man-made law must be consistent with God-given, natural rights; and that if God-given, natural, inalienable rights come in conflict with government, court, or human-granted rights, God-given, natural, inalienable rights always prevail; that there is a moral law recognized as ‘the Laws of Nature and of Nature’s God’…”

That’s not just a statement of sentiments, that’s a call to action. The document proposes that a Republican president would establish a litmus test for the appointment of jurists who recognize “the inalienable right to life and the laws of nature and nature’s God, as did the late Justice Antonin Scalia.”

The platform’s education section asserts that “A good understanding of the Bible being indispensable for the development of an educated citizenry, we encourage state legislatures to offer the Bible in a literature curriculum as an elective in America’s high schools.” Students can, of course, consider the Bible, but what about the Torah, the Koran, and the great Zoroastrian, Buddhist, and Hindu texts that have influenced Americans? What about the Jeffersonian belief that the state is “meant to comprehend, within the mantle of its protection, the Jew and the Gentile, the Christian and Mohammedan, the Hindoo and Infidel of every denomination”? What about John Adams’s belief that American should “annul every narrow idea in religion, government and commerce”?

The pluralistic views embraced by the founders and by generations of Republicans were discarded by Republican platform drafters who—even as they decried “ethnic prejudice and religious intolerance”—adopted the harsh language and rigid policies of platform committee conservatives who for the most part were given a free hand by Trump and his aides. The drafters engaged in what The New York Times has described as “a rightward lurch even from the party’s hard-line platform in 2012—especially as it addresses gay men, lesbians and transgender people.”

The platform encourages state legislatures to offer the Bible in a literature curriculum.

Described by the Human Rights Campaign as “the most overtly anti-LGBTQ platform in history,” the document calls for rolling back marriage equality and equal rights. It also attacks the rights of transgender people; as the HRC points out: “The platform in two separate sections calls for legislation to prevent transgender people from using public restrooms that align with their gender identity, arguing speciously that it is “illegal and dangerous” and “alien to America’s history and traditions.”

The platform specifically condemns judicial rulings that have barred discrimination against LGBTQ Americans who seek to marry, and endorses the appointment of justices and judges who “respect the authority of the states to decide such fundamental social questions”—even if those states reject the promise of equal protection for all Americans.

“The RNC’s convention theme might as well have been ‘Take America Backward Again,’” observed HRC President Chad Griffin. “This is a sad day for our politics, for our country and for LGBTQ people across America. One of our two major political parties just formally adopted the most overtly discriminatory, anti-LGBTQ platform in history. Unfortunately, we know we can only expect more of the same so long as Donald Trump and Mike Pence are leading the Republican Party backwards into the dark ages.”

Pence has long been associated with the religious right; as HRC notes, he has “made virulent anti-LGBTQ activism a cornerstone of his political career.”

Trump is often portrayed as a more socially moderate Republican. But Trump and his aides made no serious effort to temper the most extreme platform writers—even when more responsible Republicans sought to soften the document’s language That should not come as much of a surprise. Trump has, from the beginning of his campaign, disregarded the best thinking of the founders and the best ideals of his Republican predecessors when it comes to tolerance and respect for diversity. He has abandoning one of the most fundamental of American premises: that this country will have no religious tests. The candidate’s crude statements regarding Muslims have defined Trump’s presidential bid. And the intolerance of Trump, Pence, and their most extreme followers now defines a Republican Party that has broken faith with itself, and with the better angels of the party’s nature.