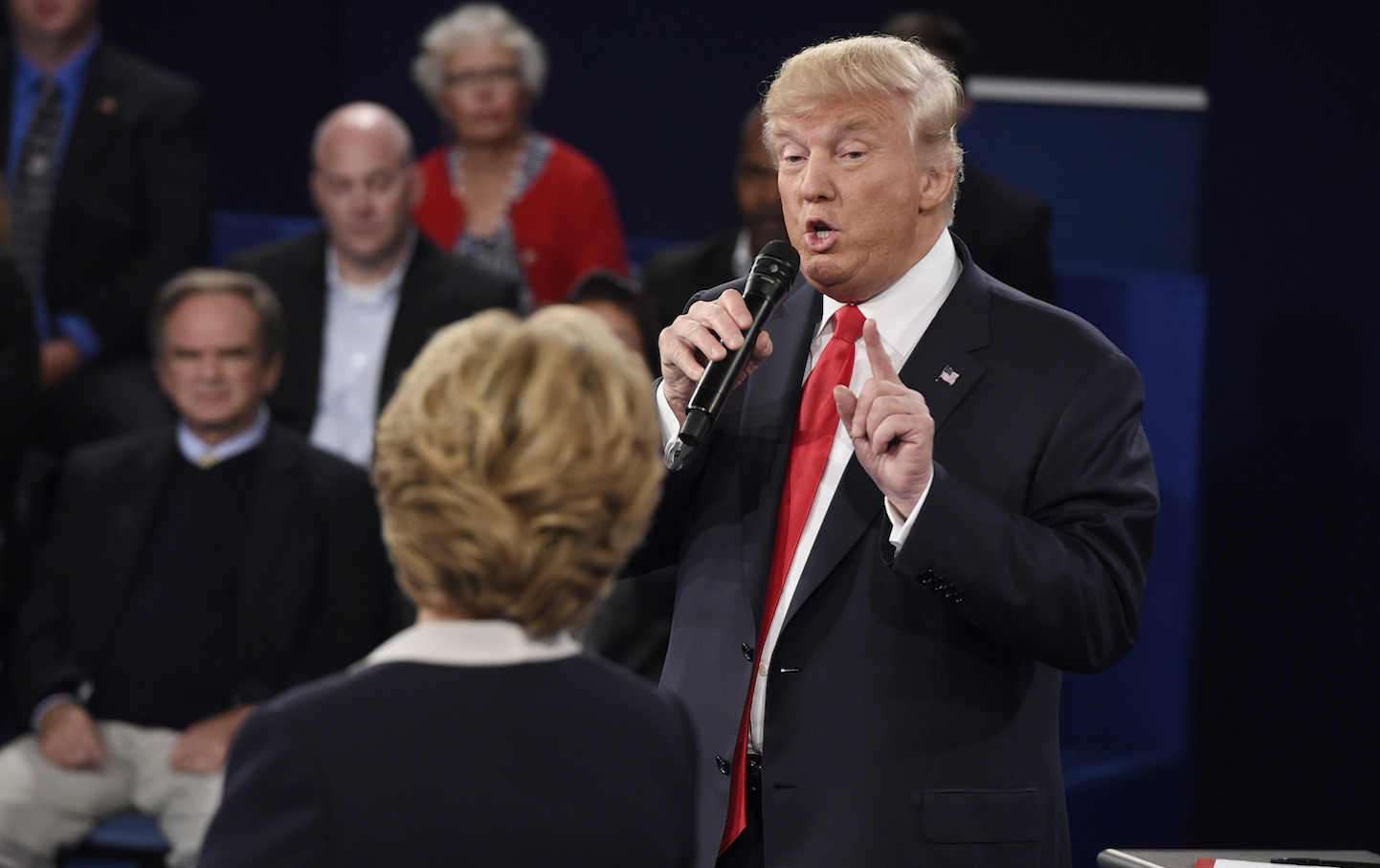 Barely an hour before the opening of the second debate between Donald Trump and Hillary Clinton, Pulitzer Prize–winning author and presidential biographer David Maraniss put Trump’s pre-debate shenanigans in perspective. After the Republican nominee for president held a “debate-preparation” press availability with women who had accused former President Bill Clinton of sexual impropriety, Maraniss described the stunt as “the slimiest most depressing scene in modern American electoral history.”

That was an appropriate assessment of Trump’s transparent attempt to deflect attention from the scandal that arose with the release of a tape of the billionaire making lewd comments about how “when you’re a star… you can do anything” to women.

But the author was only briefly correct about Trump creating “the slimiest most depressing scene in modern American electoral history.” Once the debate got started, the Republican nominee outdid himself.

The first minutes of Sunday night’s clash between Trump and Clinton produced a slimier and more depressing scene: that of a candidate for the presidency of the United States proposing to use the position to encourage a “special prosecutor” to investigate his opponent and suggesting that his election would lead to her imprisonment.

After an exchange in which Trump said that, if elected, he would “instruct my attorney general to get a special prosecutor” to investigate her handling of e-mails, Clinton pushed back and said Trump’s remarks revealed why “It’s just awfully good that someone with the temperament of Donald Trump is not in charge of the law in our country.”

"This is THE definition of fascism—Trump saying Hillary would be in jail if he were president." —David Maraniss

At that point Trump put aside the talk of special prosecutors and investigations and declared that the real reason Clinton did not want him in the White House was “Because you’d be in jail.”

Trump, whose rallies frequently feature chants of “lock her up,” smirked. His supporters in the debate hall cheered.

That was slimy. That was depressing. But it was something more: antithetical to every historic and contemporary understanding of the American experiment.

There are countries where winners of political fights have moved to jail their rivals.

But those countries are not understood to be constitutional democracies. Indeed, as Maraniss explained after Trump’s ominous announcement: “This is THE definition of fascism—Trump saying Hillary would be in jail if he were president.”

The basic premise of the American experiment is this: Presidential candidates and parties compete with one another, passionately, intensely, in campaigns that conclude with elections in which the voters settle the score. An election victory does not confer upon the new president the authority to jail his opponent. As lawless as Richard Nixon may have been, as long as his “enemies list” may have grown, the 37th president let Hubert Humphrey and George McGovern be; indeed, both of the Democrats served in Senate majorities that frequently challenged Nixon.

This is a standard that was established long ago, as the young United States wrestled with fundamental questions of presidential authority and respect for the rule of law after the Alien and Sedition Acts were signed into law by President John Adams in 1798.

In what was (until this year) the most brutal presidential election campaign in American history—the 1800 contest that pitted Adams against Thomas Jefferson—Jefferson became the first challenger to displace a sitting president. Adams accepted his defeat. But it fell to Jefferson to explain how the young country, which had been so divided along lines of partisanship, which had just heard each candidate described as unconscionable and unqualified, might unite.

The third president observed in his inaugural address that

During the contest of opinion through which we have passed the animation of discussions and of exertions has sometimes worn an aspect which might impose on strangers unused to think freely and to speak and to write what they think; but this being now decided by the voice of the nation, announced according to the rules of the Constitution, all will, of course, arrange themselves under the will of the law, and unite in common efforts for the common good. All, too, will bear in mind this sacred principle, that though the will of the majority is in all cases to prevail, that will to be rightful must be reasonable; that the minority possess their equal rights, which equal law must protect, and to violate would be oppression. Let us, then, fellow-citizens, unite with one heart and one mind. Let us restore to social intercourse that harmony and affection without which liberty and even life itself are but dreary things. And let us reflect that, having banished from our land that religious intolerance under which mankind so long bled and suffered, we have yet gained little if we countenance a political intolerance as despotic, as wicked, and capable of as bitter and bloody persecutions. During the throes and convulsions of the ancient world, during the agonizing spasms of infuriated man, seeking through blood and slaughter his long-lost liberty, it was not wonderful that the agitation of the billows should reach even this distant and peaceful shore; that this should be more felt and feared by some and less by others, and should divide opinions as to measures of safety. But every difference of opinion is not a difference of principle. We have called by different names brethren of the same principle. We are all Republicans, we are all Federalists. If there be any among us who would wish to dissolve this Union or to change its republican form, let them stand undisturbed as monuments of the safety with which error of opinion may be tolerated where reason is left free to combat it. I know, indeed, that some honest men fear that a republican government can not be strong, that this Government is not strong enough; but would the honest patriot, in the full tide of successful experiment, abandon a government which has so far kept us free and firm on the theoretic and visionary fear that this Government, the world’s best hope, may by possibility want energy to preserve itself? I trust not. I believe this, on the contrary, the strongest Government on earth. I believe it the only one where every man, at the call of the law, would fly to the standard of the law, and would meet invasions of the public order as his own personal concern. Sometimes it is said that man cannot be trusted with the government of himself. Can he, then, be trusted with the government of others? Or have we found angels in the forms of kings to govern him? Let history answer this question.

History’s answer to that question has been steady across more than two centuries. Presidential contests have been intense, often bitter. But this has not been a country where candidates have spoken of jailing their vanquished opponents. If it should ever become that country, it would not be a “successful experiment.” It would be a profoundly diminished and profoundly troubled land controlled by a man who “cannot be trusted with the government of himself” and cannot “be trusted with the government of others.”