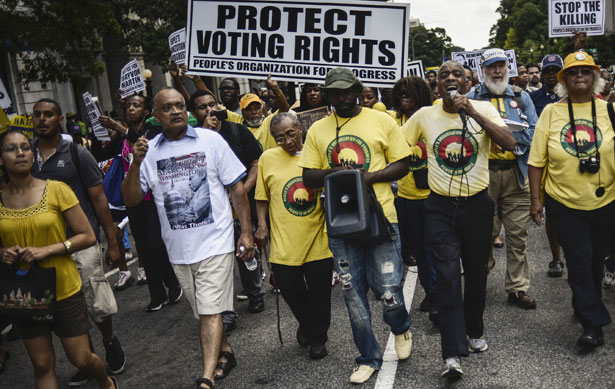 “We have frequently printed the word Democracy. Yet I cannot too often repeat, that it is a word the real gist of which still sleeps, quite unawakened,” wrote Walt Whitman in Democratic Vistas. “It is a great word, whose history, I suppose, remains unwritten, because that history has yet to be enacted.”

Whitman penned his essay on the American experiment in 1871. And there has been much progress since. Yet, there is much history yet to be enacted.

Why not assert a progressive politics that is more vital and determined than what has been known to this point?

Why not stop reacting and start asserting a real reform agenda?

Here are five steps in that direction:

1. Demand a Right to Vote for all Americans.

The last decade has seen a steady assault on voting rights in the United States, with restrictive Voter ID laws, changes in early-voting and same-day registration rules and, in 2013, a US Supreme Court ruling that Congressman John Lewis, D-Georgia, said “stuck a dagger into the heart of the Voting Rights Act of 1965.” The Department of Justice and key members of the House and Senate have taken steps to counter the assault at the federal level, and state-based efforts such as North Carolina’s “Moral Monday” movement are pushing back. These efforts are vital.

But voting rights are too precious to be left to chance. They need to be defined and defended permanently. That’s why Congressmen Keith Ellison, D-Minnesota, and Mark Pocan, D-Wisconsin, have proposed a constitutional amendment to explicitly guarantee that every American has a right to vote and a right to have that vote counted. “The right to vote is too important to be left unprotected,” says Pocan.

Groups such as Color of Change and FairVote agree. They’re campaigning to get co-sponsors for the proposal by Ellison and Pocan. So far, 20 members have joined their effort. In 2014, it’s important to pressure sitting members of Congress to sign on, and to make candidates for Congress take a stand on whether they believe Americans have a right to vote.

2. Get More States on Record for Real Reform of Elections.

Sixteen states have formally petitioned Congress to enact a constitutional amendment to overturn the US Supreme Court’s Citizens United ruling—which frees corporations to spend as much as they choose to influence elections, and which continued a process of striking down federal, state and local campaign-finance reforms. These states have formally recognized that votes should define the electoral process, not dollars. Groups such as Free Speech for People, Move to Amend, Public Citizen, Common Cause and People for the American Way have made tremendous progress at the local and state levels—working with limited resources and shamefully scant media coverage. They’ve won support from Democrats, Republicans and independents in state legislatures across the country, and they’ve organized and won statewide and local referendum votes. “In just three years since the Supreme Court’s Citizens United ruling, we have come one third of the way to amending the US Constitution to reclaim our democracy and to ensure that people, not corporations, shall govern in America,” says John Bonifaz, co-founder and executive director of Free Speech For People.

But there is still much work to do. The real “critical mass” moment will not come until current numbers double and the movement is in range of the number of states that would be required to approve an amendment: thirty-eight. Roughly 100 House members have sponsored or cosponsored amendment proposals, as have key senators such as Vermont independent Bernie Sanders and Ohio Democrat Sherrod Brown. Getting more states to formally demand action will cause more congressional buy-in for this necessary reform.

“Amending our country’s constitution should be difficult,” says Marge Baker, executive vice president of People For the American Way. “But this isn’t the first time Americans have encountered a serious problem that needs a serious solution. Citizens United and other cases that paved the way for big money to flood our elections have given us one of those moments. As more states and elected officials go on record in support of an amendment, the clearer it becomes that the American people will not stand to have their voices overpowered by wealthy special interests.”

Senator Bernie Sanders is right when he says of the current federal minimum wage of $7.25 an hour, “Most people understand that is a starvation wage. Individuals can’t live on it, families can’t live on it.” Working with the ranking Democrat on the House Education and Workforce Committee, California Democrat George Miller, and Senate Education, Health, Labor and Pensions Committee chair Tom Harkin, D-Iowa, Sanders is pushing for Congress to raise the federal minimum wage to $10.10 an hour and index future increases to the rate of inflation. That’s a good start, but it’s a tall order in the face of determined opposition in the Republican-controlled US House.

But the circumstances of millions of American workers can be improved even if Congress fails to act in 2014. In November 2013, New Jersey voters hiked that state’s minimum wage to $9 an hour and indexed future increases to the inflation rate. And in Sea-Tac, Washington, voters took the local minimum wage to $15 an hour. With the election of Kshama Sawant, a socialist who ran on the $15 wage issue, to the Seattle city council, there is now a major push in that city for a significant wage hike. If Seattle votes on a $15-an-hour wage referendum this fall, it will be as part of a pattern of critical state and local initiatives—from Alaska to Arkansas to New Mexico to South Dakota—that are designed to allow Americans to vote themselves a raise.

The Equal Rights Amendment struggle of the 1970s and early 1980s was an intense, inspiring and heartbreaking fight to finally guarantee equal rights for women. A massive right-wing pushback prevented the project from succeeding at the time—although it opened up debates that would lead to significant progress on a number of legislative fronts. In recent years, there has been something of an ERA renaissance. Three years ago, on the 100th Anniversary of International Women’s Day, then-Congresswoman Tammy Baldwin, D-Wisconsin, proposed legislation to eliminate the congressionally imposed deadline for ratification of the Equal Rights Amendment. And in February 2013, the New Mexico state House of Representatives formally asked Congress to lift the deadline for ERA ratification. At the same time, new versions of the amendment have been introduced.

Beyond Washington, twenty-one state constitutions embrace ERA-like equal rights provisions And the state of Oregon is likely to see a test in 2014. Late in December, the group VoteERA.org won approval to start gathering 116,284 valid signatures to place a state ERA proposal on the November ballot. “Shouldn’t women be explicitly equal in every Constitution?” Leanne Littrell DiLorenzo, the president of VoteERA.org, told reporters. “To me, the answer is an absolute ‘Yes, of course.’”

5. Work to Make Every Election Matter.

America has woefully low voter turnout, as compared with other major democracies around the world. Restrictive laws get some of the blame. So, too, does a money-drenched process that makes elections a spectator sport. But there is also the reality that this country’s electoral systems have too many structural flaws that make it hard to vote. That needs to change. The Brennan Center has a “How to Fix the Voting System” plan that it’s pushing in states across the country: 1. Modernize Voter Registration, 2. Expand Early Voting, 3. Improve Polling Place Resource Management, 4. Simplify Ballots and Voting Machines. And Brennan Center Democracy Program director Wendy Weiser notes that, amid all the frustrating talk about restrictions and suppression in 2013, “many states expanded voting access. In 2014, there is a real opportunity to find common ground and enact vital fixes to modernize our outdated election system.”

Common Cause and other groups are working in states across the country to end the absurd practice of gerrymandering local, state and federal election districts—which makes too many elections for too many important offices uncompetitive. The Working Families Party in New York and Connecticut, the Vermont Progressive Party and other third-party and independent groupings are drawing the rough outlines of multi-party and ideologically diverse politics from New England to the Northwest. And Fair Vote: The Center for Voting and Democracy is pushing for a wide range of reforms, while noting successes in communities that have adopted more democratic models for voting. For instance, FairVote notes, “Minneapolis uses ranked choice voting, so voters were able to express not only which candidate was their favorite, but also which second-choice and third-choice candidates they thought should win if their first choice did not qualify for an instant runoff. Ranked choice voting meant that candidates competed seriously but also positively, and Minneapolis ultimately elected a candidate who reflected a broad consensus—Betsy Hodges skipped spending money on television ads in favor of grassroots campaigning. She broke from the field by earning more than a third of first-choice rankings and more than 60% among voters who expressed a preference for either her or her strongest opponent. Altogether, she was the first, second or third choice of two-thirds of the voters.”

The Minneapolis election results provided an example of what happens when democracy is awakened. Americans need to explore this country’s democratic vistas in 2014, breaking beyond narrow partisan and ideological lines of division to develop the vibrant politics that realizes the promise Whitman imagined when he wrote that he considered the American experiment “far less important for what it has done, or what it is, than for results to come.”