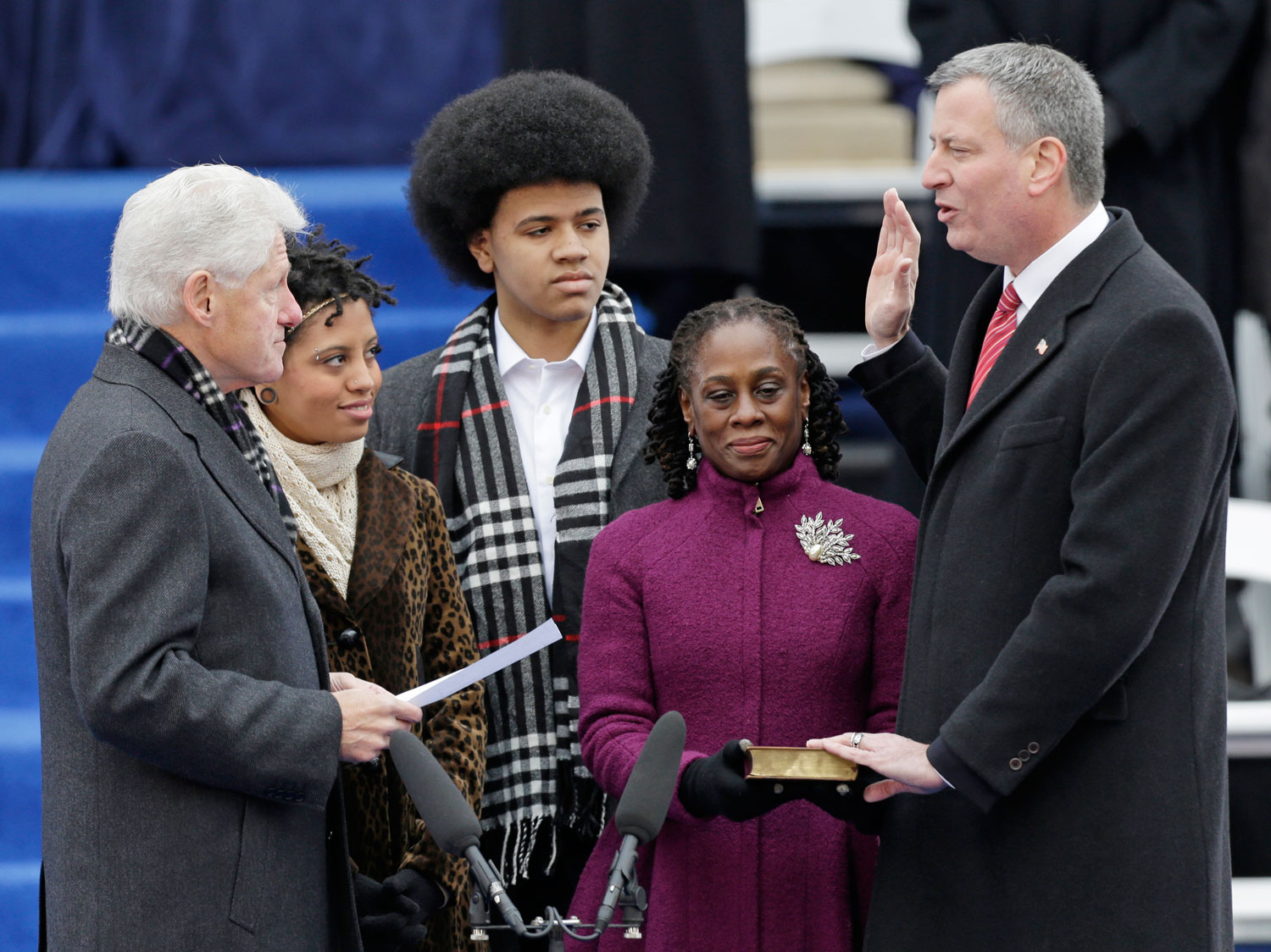 For progressives, there were a lot of inspiring things about Bill de Blasio’s formal swearing in as mayor on Wednesday: prayers that recognized the city’s incredible diversity, the dignity of Harry Belafonte, the power of poet Ramya Ramana, and the way all three citywide officials (the mayor, Public Advocate Letitia James and Comptroller Scott Stringer) so passionately articulated elements of the progressive agenda.

Then there was President Clinton.

All former presidents deserve respect, and anyone who had to meet Newt Gingrich more than once merits a round of applause. And yes, during the eight disastrous years of Dubya, many would have traded in their Ralph Nader stickers to bring Bubba back.

But in spite of his rock-star status and brilliance as an orator, Clinton has questionable value as a symbol of the kind of progressive change de Blasio has promised. He’s more accurately a symbol of dashed progressive hopes.

One remembers Bill Clinton’s inauguration in 1993. George 41 and Barbara taking the Reagan era with them out of town on Marine One. Bill and Hillary getting out of their car to walk during the inaugural parade. The Rock, the River, the Tree. And so on.

In office, however, Bill Clinton pushed NAFTA over labor’s objections and sought Most Favored Nation trading status for China in the face of severe human rights concerns. He waived human rights requirements to facilitate Plan Colombia, which provided military aid to the Bogota government. He oversaw much of the financial deregulation that enabled the 2007–08 financial crisis. He widened federal authority to impose the death penalty. He signed into law the harsh 1996 immigration bill, backed measures that vastly expanded executive power to fight “terrorism” and supported the odious Defense of Marriage Act.

Clinton did have some progressive instincts, reflected in his appointing Supreme Court Justices Breyer and Ginsburg, resisting the most Dickensian aspects of the Republican anti-welfare crusade, and his failed healthcare push. And he did have to deal with an ascendant, Contract-With-America-waving GOP.

But through his “third way” approach, Clinton legitimized the conservative argument for reducing or eliminating government. He moved the Democrats to the center. The Republican party simply moved right.

Presidents get great afterlives, fueled largely by fiction. Nixon was ultimately eulogized as a misunderstood genius, Reagan as a warm and cuddly grandfather to us all. And Clinton is now beloved by lefties who intensely disliked much of what he did. Weird.

Is de Blasio set up to confound the left as much as the forty-second president did? It’s a possibility. But the Clintons’ presence yesterday may have reflected a personal, rather than political, connection: De Blasio worked in the Clinton administration and ran Hillary Clinton’s first campaign for the Senate. Plus, de Blasio ran this year well to the left of any territory that Bill and Hill staked out during their time as candidates.

What’s more, the political atmosphere has changed vastly since the president’s era of triangulation, mainly because we have seen what it wrought. At City Hall on Wednesday, Clinton fully endorsed de Blasio’s focus on inequality before the new mayor took the oath of office with his hand on a bible FDR was given at his first inauguration.

Back when “the era of big government” was over, the New Deal was not a popular reference for the Clinton team. Today, it works. Like Maya Angelou said when Bill Clinton was the face of hope twenty-one years ago:

“History, despite its wrenching pain
cannot be unlived, and if faced
with courage, need not be lived again.”