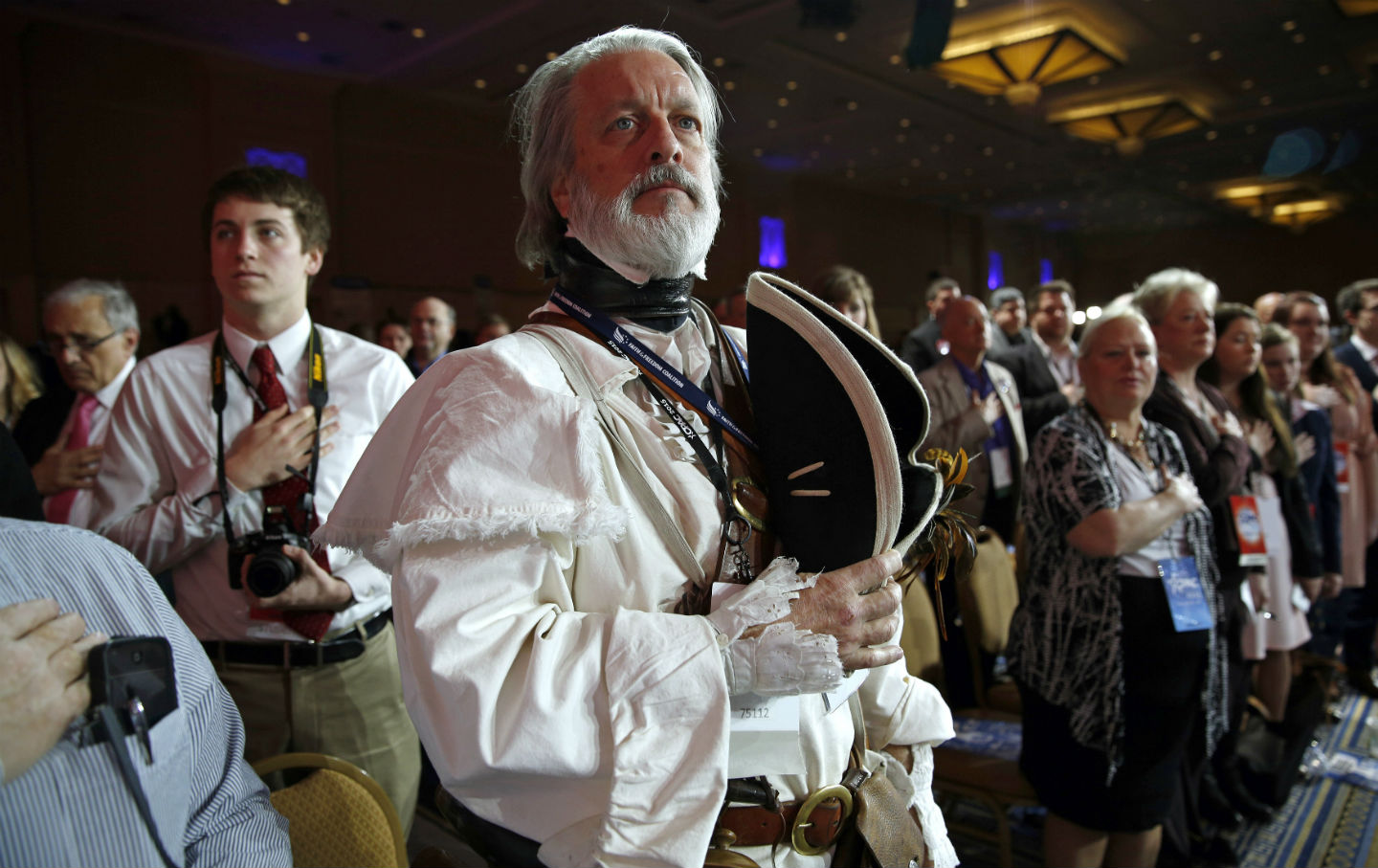 Conference attendees rise for the Pledge of Allegiance at the start of the Conservative Political Action Conference (CPAC). (Reuters/Kevin Lamarque)

I’ve been covering the Conservative Political Action Conference (CPAC) on and off for more than a decade. I’ve seen it in full jingoistic flower early in George W. Bush’s administration, when attendees could buy bumper stickers like No Muslims = No Terrorists and hurl beanbags at toy trolls holding signs that read The Homosexual Agenda or The Liberal Media. I’ve seen it during moments of despair, when conservatives realized that Republican leaders wouldn’t enact the entirety of the right’s kamikaze agenda. But I have rarely seen it as slick and as sunny as it was this year—and that scares me.

Organized by the American Conservative Union, CPAC always draws leading Republican politicians and aspirants. This year, all the likely GOP presidential candidates were there, including Scott Walker, Jeb Bush, Ted Cruz, Rand Paul, Chris Christie and Rick Santorum. Perhaps because of that, there seems to have been a real effort to tone down the event’s customary outrageousness. Poor Ann Coulter, once a reliable CPAC bomb-thrower, was nowhere on the program. There was a conspicuous absence of Hillary Clinton nutcrackers and other Instagram-ready right-wing kitsch. Even Sarah Palin, who spoke Thursday night, was shockingly lucid and rational, devoting her remarks to the plight of veterans suffering overlong deployments, PTSD and backlogs at the VA.

Certainly, there were moments of craziness—it wouldn’t be CPAC otherwise. Scott Walker made headlines for comparing Wisconsin’s pro-union activists to ISIS terrorists: “If I can take on 100,000 protesters, I can do the same across the world.” Donald Trump appeared before a jam-packed room and said he’s still not sure about Obama’s birth certificate. In general, though, the organizers appeared determined not to provide too much fodder for Twitter or cable news. Nobody said anything shocking about birth control. There was little overt homophobia; even Ted Cruz framed gay marriage as a states’-rights issue rather than talking about the sacred union of a man and a woman. After years of excluding the Log Cabin Republicans from CPAC, the American Conservative Union’s new director, Matt Schlapp, offered them a tentative welcome. “All conservatives, including conservatives who are gay, are welcome at CPAC,” said an ACU press release, and the Log Cabin Republicans’ executive director, Gregory T. Angelo, was invited to speak as part of a panel on Putin’s Russia.

It’s great, of course, that blatant anti-gay bigotry is becoming taboo. But it’s not good news that conservatives have gotten better at hiding their extremism. One of the essential weaknesses of the GOP is the gap between its reactionary base and the mainstream electorate: the party’s candidates have to feed red meat to the former without repelling the latter. When they fail, whether it’s Palin in 2008 or Todd Akin in 2012, the Republicans lose. But as long as they can put a patina of reasonableness over their reaction, they have a chance.

The GOP understands this; in 2013, it published a much-discussed audit, the “Growth and Opportunity Project,” which examined how the party had marginalized itself. Among other things, the report highlighted the way Republicans were alienating young people, potentially losing an entire generation: “On messaging, we must change our tone—especially on certain social issues that are turning off young voters.”

We saw the fruits of this new strategy in 2014, when the party elite largely wrested control of the nomination process from the Tea Party. Democratic attempts to hammer Republicans on the War on Women and other social issues, so successful in 2012, fell completely flat in the face of candidates who’d learned to avoid setting off alarms. The GOP’s policy positions didn’t change—they still opposed gay marriage, legal abortion, government support for birth control and many civil-rights laws—but they jettisoned the language of culture war for upbeat talk about religious liberty and the importance of local control. Without far-right buffoonery to use as a foil, Democrats saw their advantage among young people narrowed by half, to just eleven points.

CPAC suggests that this might not be an anomaly: the number of young people at this year’s event was particularly striking. Members of a new group called Turning Point, which bills itself as the MoveOn of the right, were everywhere, dressed in matching red polo shirts. They eschew social issues entirely; their simple slogan is “Big Government Sucks!” More than 1,000 millennials turned out for their event, which wasn’t advertised on the official program. Cruz and Paul both spoke. Paul invoked Kalief Browder, a teenager who spent three years in jail without being charged with a crime, as an example of big government run amok. Cruz talked about “grassroots guerrilla campaigning” and described how much he’d learned from studying Obama’s 2008 primary race against Hillary Clinton. The Clintons, he said, “didn’t know what hit them until it was all over.”

Maybe this is all bluster. Perhaps Clinton, running unchallenged at this early stage, will be able to outdo the right in discipline and intensity. But it seems far from guaranteed, particularly if she surrounds herself with the sort of sclerotic hacks who ran her last campaign. What’s clear is that Democrats can’t count on Republicans to lose in November. They have to find a message and a platform that can win.