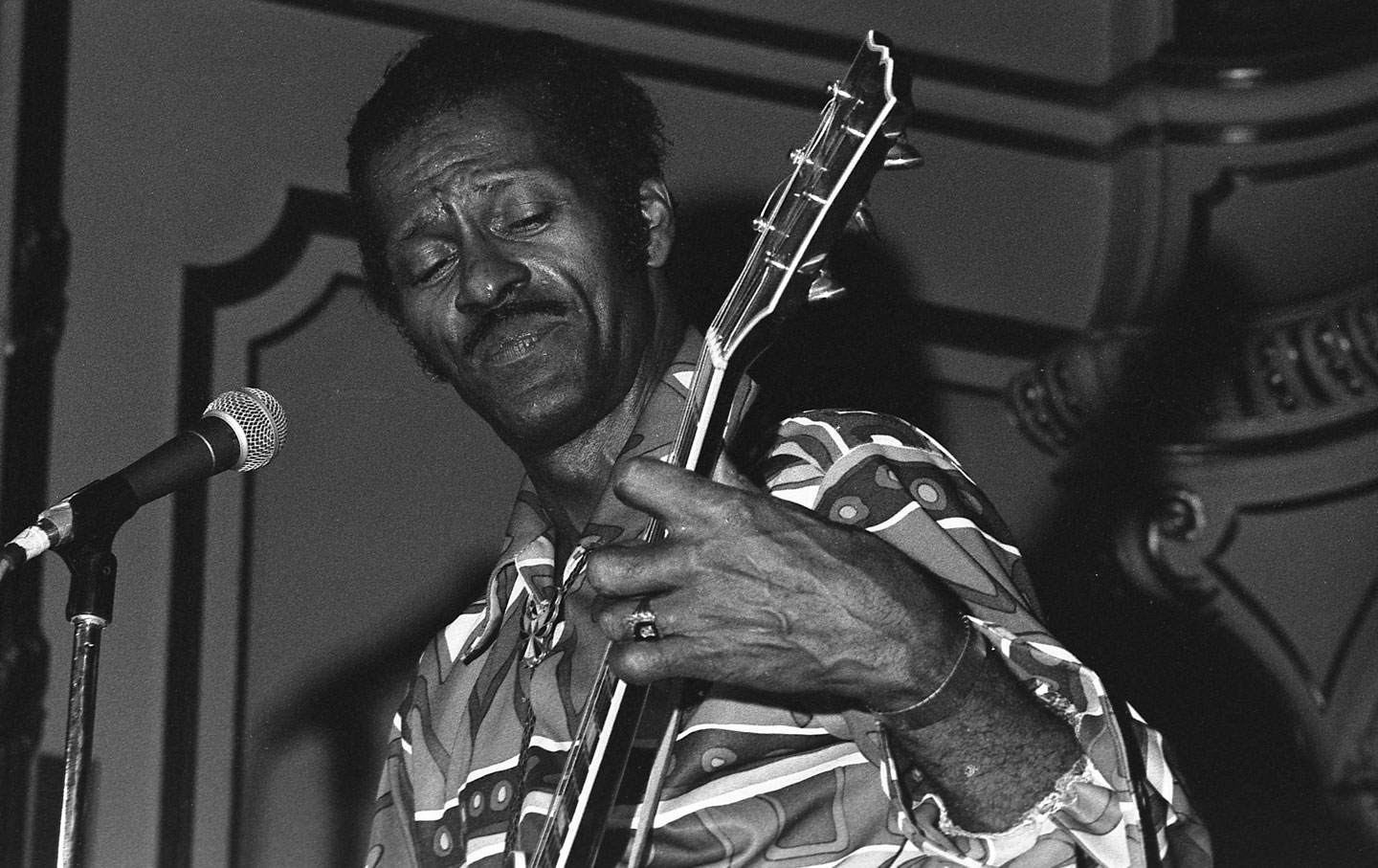 Sex and poetry. The first was robustly, thrillingly, sometimes disturbingly overt in the music of Chuck Berry, the seminal early innovator of rock ’n’ roll who died at age 90 on March 18; the second revealed itself slower, through distillation, but was perhaps of even great power in his art. The songs he wrote and sang—at a time when authorship of the material was itself something rare among pop singers—celebrated eros as the taboo reward for enduring the tribulations of teen life in mid-20th-century America; it was the prize waiting in the back seat at the end of a day of dull classes, square teachers, and after-school jobs. And yet there was art to it, from the schoolboy drooling of the lyrics and the pounding backbeat to the sinuous muscularity of his electric-guitar playing and the brazen, masculine carnality of his stage presentation.

When parents, PTAs, and church elders got all panicky about the strange new vein of pop music emerging in the ’50s, Chuck Berry was the embodiment of all they dreaded and misunderstood: a charismatic black man who stirred up adolescents of all colors and classes. At the same time that the civil-rights movement was catching fire, with the debate over school segregation and restricted accommodations in the headlines, Berry triggered—and at the same time loosened—white America’s hoariest fears about integration’s possibilities in danceable messages delivered on the platters of millions of teenagers’ record players.

Berry was arrested and imprisoned on charges of violation of the Mann Act for transporting a 14-year-old girl across state lines. The news seemed to validate his critics’ discomfort with Berry and the quasi-pedophilic quality of songs like “Sweet Little Sixteen”—if there was nothing questionable in a 16-year-old rock-and-roll fan’s singing along to “Sweet Little Sixteen,” it was something different to hear or watch it sung by Berry, who was 31 at the time. When he reemerged after several years away from the pop charts in 1972, he had the first and only number-one hit of his career: the novelty song called “My Ding-a-Ling.” It came as little surprise to hear Chuck Berry making potty-mouth jokes about his genitalia.

Yet, if Chuck Berry were no more than a supreme exemplar of pop prurience, he would be just another Hank Ballard and historic solely as a precursor to Marvin Gaye and Prince. But Berry was much more—a master of multiple arts: a highly original and influential guitarist; a performer so dynamic that his presence could reliably transcend the hacking of the pick-up bands he used exclusively for decades; and as great a songwriter as rock and roll has ever produced.

Berry’s lyrics were truly poetic: vivid accounts of young life, full of wit and ungimmicky wordplay, grounded in specificity and yet general enough to garner a wide audience. Drawing often from his own memories, Berry wrote veraciously about the day-to-day concerns of ordinary kids. He wrote about going to school and hating it, about the thrill of playing hooky in a souped-up convertible, cruising around and playing the radio, and with no particular place to go.

Only Berry could conjure a scene of teenage newlyweds with the precision of the verses in “You Never Can Tell”:

In early rock ’n’ roll , Berry often seemed like the only one writing things like the cheeky couplets in “Too Much Monkey Business”:

Working in the fillin’ station, too many tasks
Wipe the windows, check the tires, check the oil, dollar gas

You can see where hip-hop came from in those 19 words, and you can imagine how a young Bob Dylan might have been stirred by the gushing, dizzying, perfectly imperfect street lyricism of a Chuck Berry songs long before he wrote anything like “Subterranean Homesick Blues.”

The sex in Berry’s music was fun, if also sometimes disturbing, but it is the poetry endures.