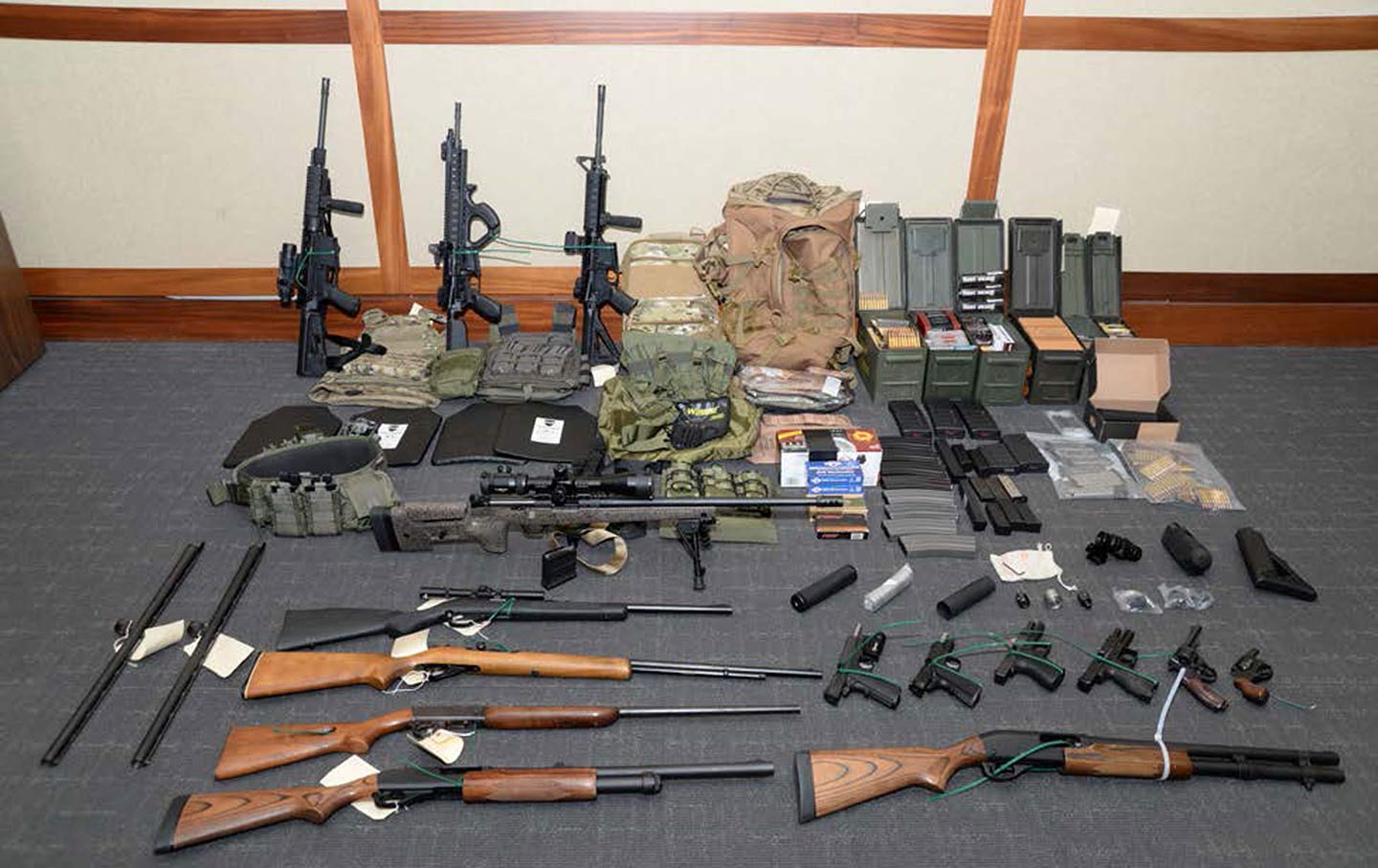 A cache of guns and ammunition uncovered by US federal investigators in the home of Coast Guard Lt. Christopher Paul Hasson on February 20, 2019. (Reuters / US District Court for Maryland)

I’m sad about the mess Empire star Jussie Smollett has allegedly caused, and the pain he must have felt to cause this mess. I’m sadder still that the charge that he faked an attack by racist, homophobic Donald Trump supporters in MAGA hats is now the leading story on the front of white-supremacist violence, while we have two genuine examples of white-supremacist menace sludging up our legal system—and they are getting far less coverage.

Of course, Trump took advantage of the Smollett story to tweet: “@JussieSmollett – what about MAGA and the tens of millions of people you insulted with your racist and dangerous comments!? #MAGA.” But as TV viewers watched Smollett be shamed live, in real time, in a Chicago courtroom Thursday afternoon, the more important stories about actual violent white racism were elsewhere.

Coast Guard Lt. Christopher Paul Hasson, 49, was arrested nominally on drug and gun charges last Friday, but behind the broad outlines of his threatened violence was a plan to target known Trump enemies, liberals whom the White House bully has railed against in speeches and on social media, from Democratic Congressmembers like Representatives Maxine Waters and Alexandria Ocasio-Cortez and Senator Richard Blumenthal (he called him “Sen blumen jew”), to journalists like CNN’s Chris Cuomo and Don Lemon and MSNBC’s Chris Hayes, and “leftists in general.” Weirdly, Hasson’s arrest wasn’t broadcast by the Trump Justice Department; can you imagine the administration busting a violent, well-armed would-be Muslim terrorist and not blowing its own horn to the media?

Meanwhile, lifelong GOP dirty trickster Roger Stone, who likes to portray himself merely as a bad boy, a gadfly, an insurrectionist, a “try-sexual” (as in he’ll try anything); a political fixture who has hundreds of mainstream reporters in his cell phone, because he gives good sound bite—Stone wound up back in Judge Amy Berman Jackson’s courtroom because he seemed to have threatened her last week with ugly images on Instagram, including one that was widely interpreted as placing crosshairs just behind Jackson’s head. 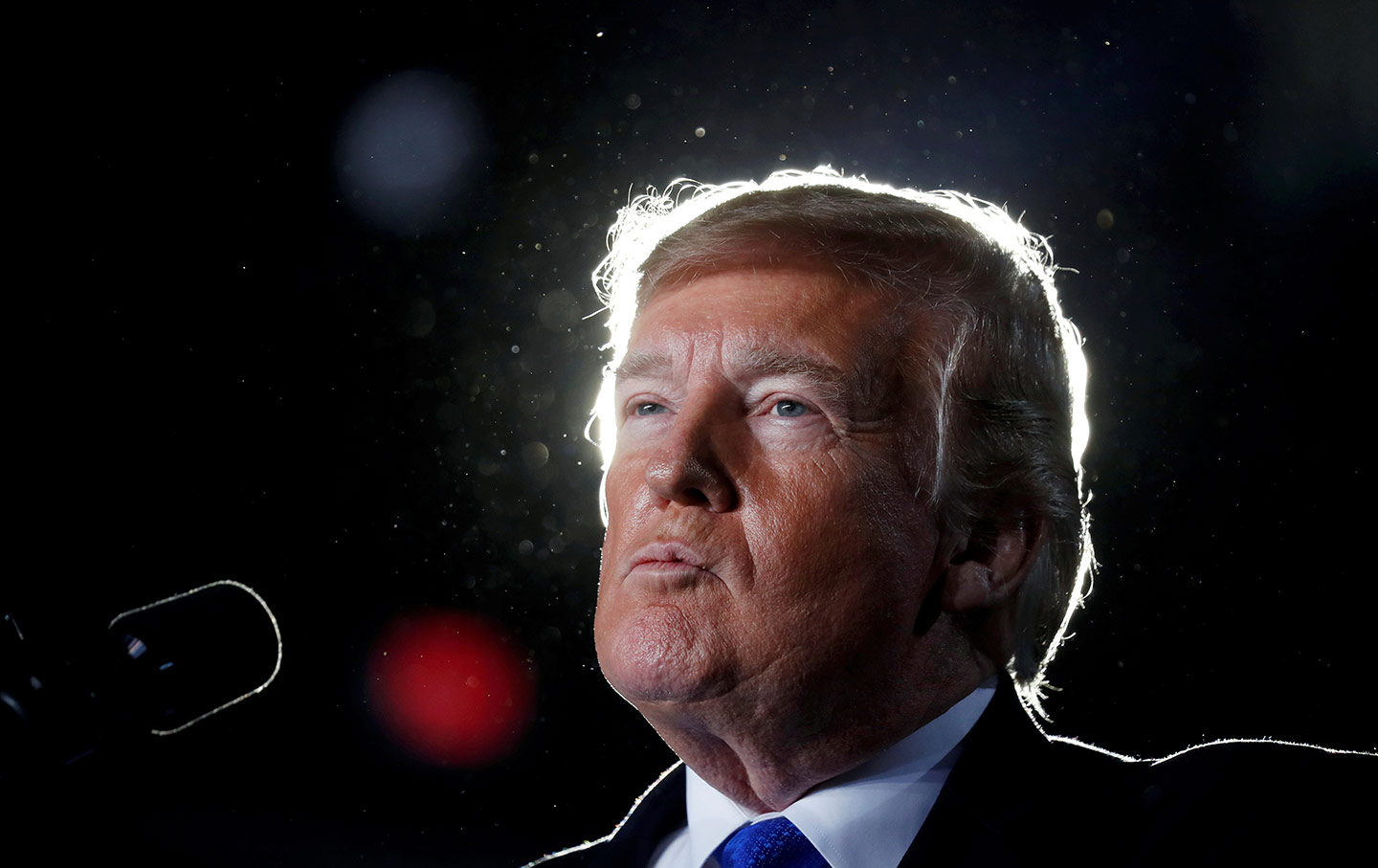 Is Trump a Racist?

Smollett’s alleged hoax matters, of course, but not as much as the real-life activities of real, live racists—and yet Smollett is getting by far the most coverage. And the fact that Smollett apparently lied about a hate crime should not obscure the fact that hate crimes are increasing in the age of Trump. We, the media, must do better here.

Stone denies those were crosshairs in his menacing Instagram post about Judge Jackson, but it doesn’t much matter. It’s true the circle with a cross through it looks like a type of gun sight; it’s true it also looks like the Iron Cross, the symbol for the Nazi Stormfront site. Stone tried to describe it even more innocently, as a “Celtic cross,” an ancient Irish symbol. If so, it doesn’t look like one. As it happens, I got a Celtic cross necklace at birth, from my godfather; traditionally it’s a cross, often braided, adorned with a circle, a symbol of infinity, or eternal life. There is only one context in which Stone might have been brandishing a Celtic cross, albeit a bastardized one. It’s been adopted by certain racist morons to symbolize their allegedly pure white Celtic ancestry. So we must be clear: Even Stone’s allegedly innocent explanation of the symbol he used to adorn Judge Jackson’s photo is racist and threatening.

At any rate, Jackson didn’t buy it. “Roger Stone fully understands the power of words and the power of symbols. And there’s nothing ambiguous about crosshairs,” she said. “No, Mr. Stone. I’m not giving you another chance. I have serious doubts about whether you have learned any lesson at all.” The judge has now barred him from speaking in any way about his case until his trial. Which to Stone is akin to asphyxiation. But if he violates her order, he will join his old friend Paul Manafort behind bars.

Strangely, Hasson’s much-more-aggressive threats of violence remain even farther at the margins of news coverage, even though Hasson seems to share some of the racist and anti-Semitic obsessions of Trump worshipper Cesar Sayoc, who sent pipe bombs to prominent Democrats and journalists last year, as well as the Pittsburgh Tree of Life murderer Robert Bowers, a racist anti-Semite who thought Trump hadn’t gone far enough with hate. The Coast Guard officer was crystal clear about his racism, according to The New York Times, writing a letter about the need to start a race war: “Much blood will have to be spilled to get whitey off the couch.” His Google searches included questions about “civil war if Trump impeached,” where certain liberals and members of Congress live, and whether they have guards or protection. Trump hasn’t tweeted about Hasson’s arrest, even though prosecutors described him as a “domestic terrorist” in court filings this week.

Appallingly, even after all of this violence and threatened violence, Trump continues to tweet about some of the same media figures targeted by Sayoc, Bowers, and Hasson, going so far as to call the Times “THE ENEMY OF THE PEOPLE” only yesterday.

The Jussie Smollett story surely merits coverage. But the white-supremacist threats of Trump supporters merit much more. I’m not sure what it’s going to take to get the balance right. Clearly, journalists aren’t being driven by self-interest here. We are in the crosshairs of Trump’s most extreme supporters, but the Smollett story, with its celebrity sizzle, its time-honored fakery and its racial jujitsu, is perceived to draw the bigger audience—so that’s the one more of us chase. That’s bad for the country—and journalists too. Let’s hope we change the balance soon.