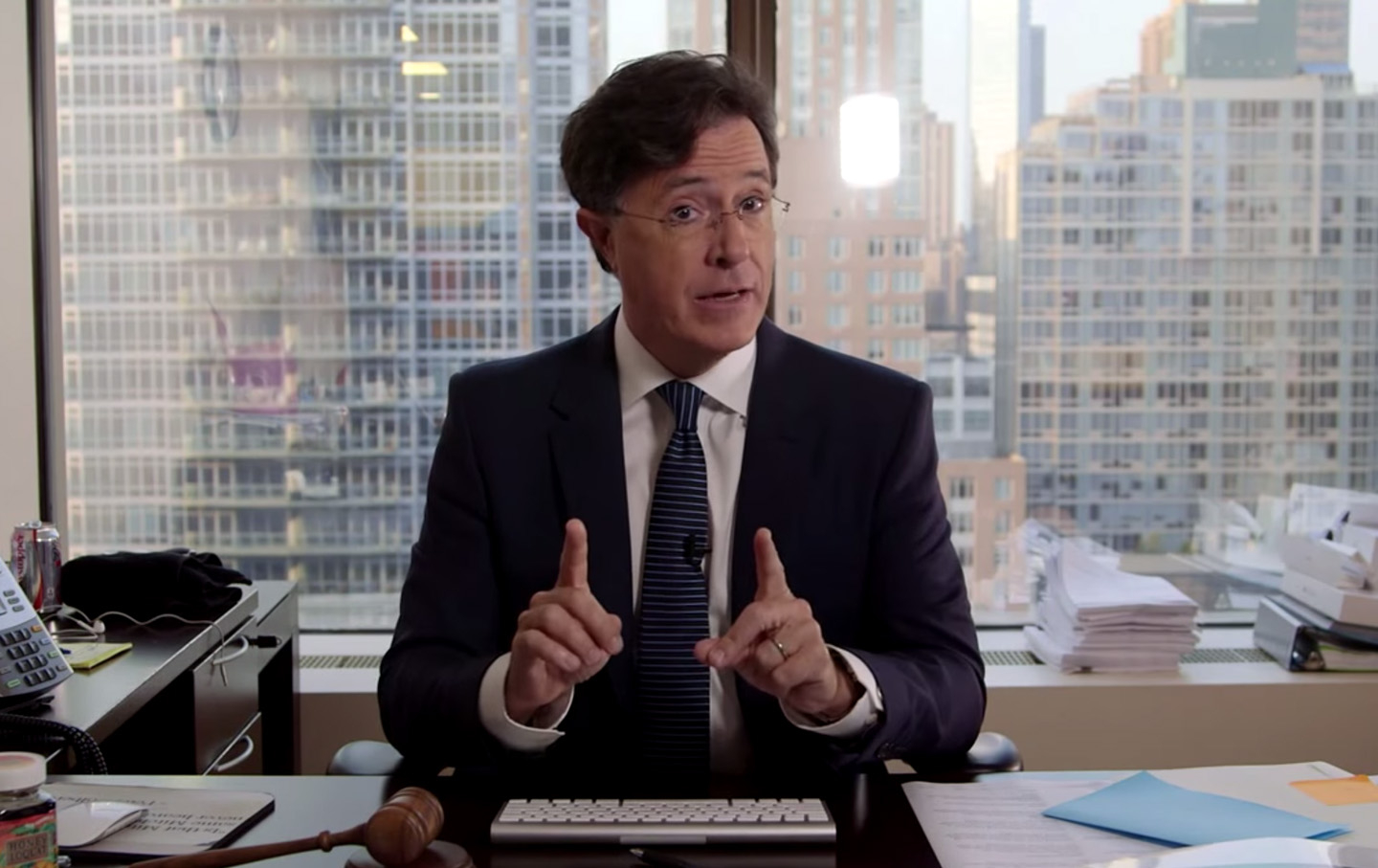 When Stephen Colbert ended his nine-year run as host of his self-titled Colbert Report last December, he took with him one of the great satirical voices of the age. Colbert had mastered a new kind of irony—not of the nihilistic kind (“Nothing I’m saying means anything,” his character once ironically proclaimed), but of a multi-hued variety deployed both for entertainment and as a complex form of critical inquiry in a corporate media age grown overly passive and complicit with power.

At the same time, The Colbert Report functioned as an unlikely public sphere. Colbert orchestrated a far-ranging public conversation, interviewing a remarkable variety of people—not just the movie stars and musicians that populate most late-night TV talk, but more often politicians and pundits, artists and activists, intellectuals and innovators, many of whom receive little attention in other media venues. Finally, The Colbert Report offered a space of great joy for a loyal audience—the Colbert Nation, he dubbed it the very first night—whose demographic make-up made Colbert the envy of most television executives.

It was both understandable, therefore, and a bit unlikely, that CBS would tap Colbert to replace David Letterman as the new host for a reinvented Late Show, the first of which airs September 8. For CBS, the agenda is clear. The network needs the Colbert Nation to move from their niche home on cable TV to the larger, but rapidly depopulating continent of network late night. The Colbert Report audience was the youngest among all news and public information programs; the average age of Letterman’s audience was nearing 60 at the end of his run. CBS is hoping that Colbert can revitalize the program and compete with NBC’s Jimmy Fallon, who is dominating the battle for late-night advertising dollars. Perhaps most importantly, Fallon’s Tonight Show has proven well-calibrated for the age of digital video and social media, where the on-line circulation of video clips is a core driver of revenue. CBS needs Colbert to follow suit.

CBS needs the Colbert Nation to move over to the rapidly depopulating continent of network late night.

Given Colbert’s formal inventiveness and well-demonstrated Internet savvy, he should be able to do so—that is, if the network lets him. Network television, and CBS particularly, have never been spaces of risk-taking; the avant-garde has never been their stock-in-trade. Neither is network late-night a familiar space for the kind of edgy criticism, of politics and, more provocatively, of the media themselves, that drew so many to The Colbert Report in the first place.

Gone, of course, will be the satirical character of “Stephen Colbert,” the megalomaniacal blowhard loosely fashioned after Bill O’Reilly, a vehicle the real Colbert used to push back against right-wing punditry and the wider paradigm of spectacle and spin that has enabled it. In place of this sharp-edged comedic sword, Colbert likely will turn to softer modes of political inquiry and activism. He already posted a six-minute parody of Donald Trump’s equally comic presidential announcement, and later this month will co-host the Global Citizen Festival in Central Park. As part of that ambitious effort to ease global poverty and increase environmental sustainability, Colbert—explicitly in his position as Late Show host—recently led a successful Twitter campaign to push the Norwegian Prime Minister Erna Solberg to commit millions of dollars to support girls’ education around the world.

Less clear, however, are the demands Colbert, and CBS, are prepared to make of the US political system. We will know a bit better when Colbert interviews Jeb Bush, the first major political player to appear on the new Late Show. For more than two decades, network late-night chat has been a safe space for national politicians to craft their public persona. The rules of the game keep the conversation light, focusing on warm interaction and personal anecdote in place of tough questions.

Will Colbert be able to stick to that formula, or will his critical inclination find its way through? After all, it was his acute criticism of Jeb’s big brother and the ideological infrastructure that supported him that put Colbert on the radar in the first place. His ironic inversion of the 2006 White House Correspondents’ Dinner was a profound and genuinely daring performance of satirical criticism. So too was the 2007 “Metaphor-Off” Colbert hosted with the actor Sean Penn and the former National Poet Laureate Robert Pinsky, a set piece on The Colbert Report designed to amplify Penn’s pointed, if inartful, criticism that George W. Bush and the “smarmy pundits” in his pocket were “bathing in the moisture” of his “blood-soaked underwear.” That, Penn explained at the end of the segment, was a metaphor for “the president’s responsibility for a mishandled war based on lies.”

It is a safe bet there will be few references to mishandled wars based on lies, and even fewer to blood-soaked underwear on Colbert’s Late Show. The guest list for the first week, though, suggests that Colbert will strive to remain at the epicenter of the cultural conversation. Scattered among the obligatory A-list celebrities are a number of ideas people, including Elon Musk and the Uber CEO Travis Kalanick. Colbert has retained his guest coordinator, Emily Lazar, to help ensure that his program continues to give voice to an eclectic variety of intellectual, cultural, and opinion leaders. That alone will make the new Late Show worth watching. We’ll likely have to look elsewhere, though, for the strong voice of political criticism Colbert used to provide.