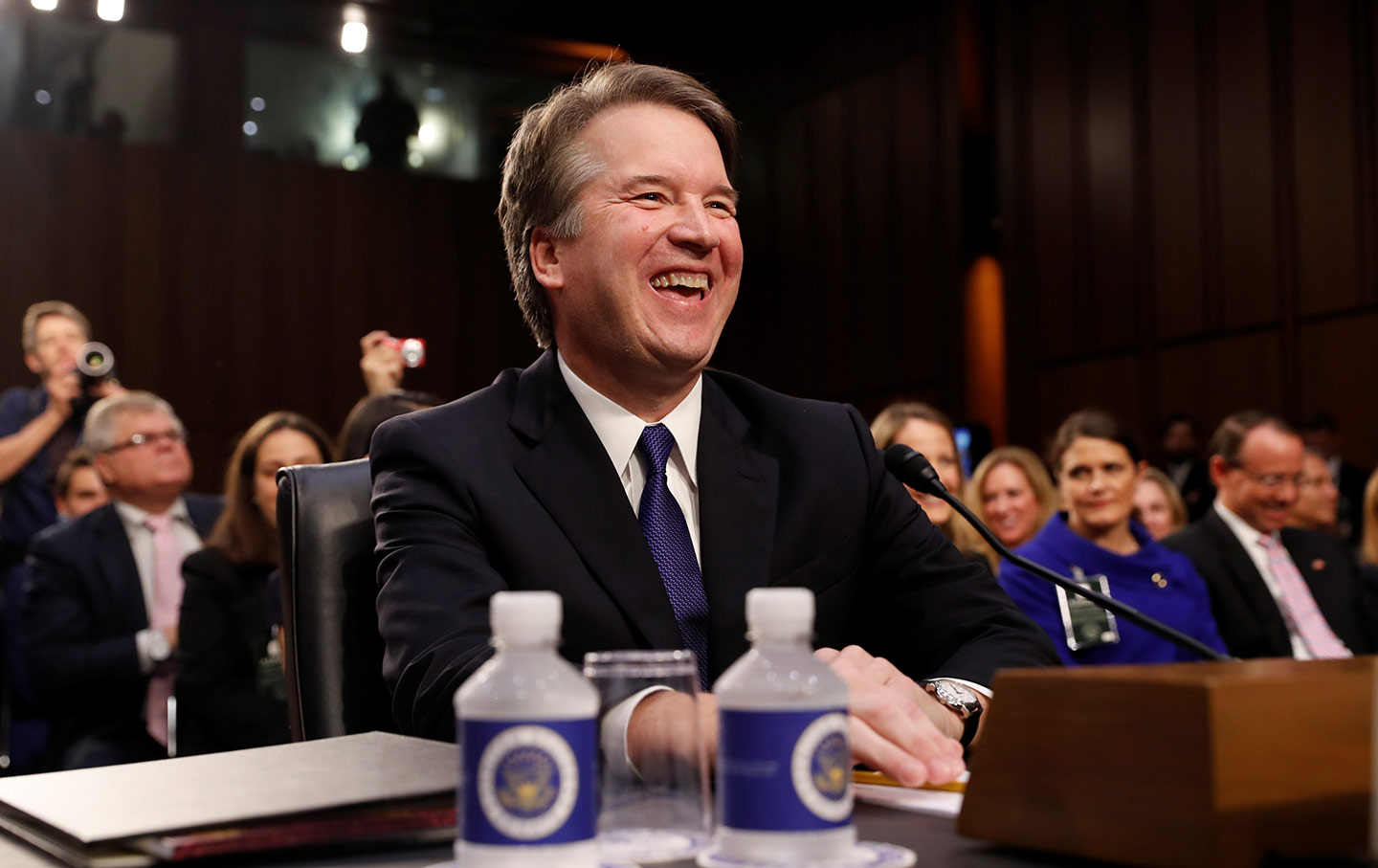 Republican leaders of the Senate refused to organize a confirmation process that might have allowed senators to provide honest advice and consent regarding Donald Trump’s nomination of Judge Brett Kavanaugh to serve on the Supreme Court. This failure of duty, orchestrated with deliberate intent by Senate majority leader Mitch McConnell and Senate Judiciary Committee chairman Chuck Grassley, has resulted in a narrow 50-48 confirmation vote for Kavanaugh—a vote that will be remembered as one of the most dishonorable decisions in the long history of an often-blameworthy institution.

McConnell and Grassley—a pair of White House hirelings who were assisted in their infamy by blank-stare partisans such as Jeff Flake and Susan Collins—upended the constitutionally defined provisions for the oversight of presidential nominations for the high-court bench. By Saturday evening, Kavanaugh had been sworn in as a justice whose championship of expanded executive authority threatens to further erode the separation of powers as outlined by the Constitution.

But this does not mean the system of checks and balances must continue to give Kavanaugh a pass. He is no longer under the protection of the Senate, and that means that Justice Kavanaugh can and should face the accountability moment that was denied by McConnell’s debasement of the confirmation process.

The measure of that debasement is found in the confirmation of Kavanaugh, a man whom former Supreme Court Justice John Paul Stevens has dismissed as unfit to sit on the high court.

Posters reading “Pattern of Lies” reminded everyone of the corruption of the confirmation process by Senate Republican leaders who failed to address the nominee’s deliberate dishonesty in testimony under oath to the Judiciary Committee.

The reasons for keeping Kavanaugh, a veteran political operative and determined judicial activist, off the Court were outlined by dissenting members of the Senate during the debate that preceded Saturday’s extraordinary vote, and by thousands of protesters who rallied around the Supreme Court Building and the Capitol. Those protests continued through the confirmation vote, which was interrupted by a woman who cried “Shame!’ from the Senate gallery as Vice President Mike Pence completed the charade.

Some of the arguments against Kavanaugh were political. Some were practical. Some were moral. Many of them intersected in the message from a group of women, angered with the failure of the Senate to take seriously allegations of sexual abuse against the nominee, who unfurled a banner that read survivors vote: november is coming.

Posters denouncing Kavanaugh’s “Pattern of Lies” reminded everyone of the corruption of the confirmation process by a Republican majority that refused to address the nominee’s deliberate dishonesty in testimony under oath to the Judiciary Committee.

That dishonesty must not be dismissed by responsible members of the Congress.

No matter what Trump, Pence, McConnell, and Grassley claim, and no matter what cautious Democratic strategists might suggest, Congress cannot ignore credible evidence that Kavanaugh lied while under oath. The list of the justice’s documented lies continues to grow. It is more than sufficient to merit an investigation into Kavanaugh’s lawless behavior by the House Judiciary Committee. That investigation has already been discussed by the man who will chair the committee if Democrats win the House in November, New York Congressman Jerry Nadler.

Nadler explains that, with “the Senate having failed to do its proper constitutionally mandated job of advise and consent, we are going to have to do something to provide a check and balance, to protect the rule of law and to protect the legitimacy of one of our most important institutions.”

One of the ablest arbiters of constitutional issues in the Congress, Nadler proposes the dutiful examination of the Kavanaugh nomination that was thwarted by Senate leaders. “We can’t have a justice on the Supreme Court for the next several decades who will be deciding questions of liberty, and life, and death, and all kinds of things for the entire American people who has been credibly accused of sexual assaults, who has been credibly accused of various other things, including perjury. This has got to be thoroughly investigated,” he said last Sunday, as McConnell was rushing the confirmation process to its conclusion. While Nadler said that he hoped the Senate would do its job, he concluded: “If he is on the Supreme Court and the Senate hasn’t investigated, then the House will have to.”

Nadler is not proposing Kavanaugh’s impeachment. But it should be understood that any honest investigation into this man’s lies under oath—and into a host of other issues that were raised but never really examined during the confirmation process—has the potential to become an impeachment inquiry.

Constitutional lawyer John Bonifaz said as it became clear that Kavanaugh would be confirmed, “[There] will be a campaign to impeach him. He does not belong on the nation’s highest court or on any court.”

Proposing to investigate and impeach Kavanaugh is not sour grapes or political gamesmanship. It is an indication of respect for the system of checks and balances.

Talk about the need to hold Kavanaugh to account is not a casual suggestion made in the heat of the moment. This is a reminder of a responsibility that extends from the oath that members of the House and the Senate swear to “support and defend the Constitution of the United States against all enemies, foreign and domestic [and] that I will bear true faith and allegiance to the same.”

The Constitution gives the House, as the chamber closest to the people, the authority to initiate impeachment proceedings. This is done when warranted by evidence of wrongdoing that affronts the Constitution and the processes by which its provisions are exercised.

Lying under oath to the Congress represents a classic impeachable offense, as the accountability group Free Speech for People noted in a recent “Call on Congress to Launch an Impeachment Investigation of Judge Brett Kavanaugh” Deliberately deceiving the Judiciary Committee is not merely impeachable because of the dishonesty itself but also because the lies disrupt the advice-and-consent duty that the Senate is required to perform.

The details of Kavanaugh’s lies have already been outlined at great length. The senior member of the Senate, Vermont Democrat Patrick Leahy, has described lies Kavanaugh told the committee regarding his use of stolen documents to manipulate the confirmation process for Bush’s judicial nominees. Former Judiciary Committee member Russ Feingold (D-WI) has argued that “Taking all his testimony together, we see a clear pattern emerge: Brett Kavanaugh has never appeared under oath before the U.S. Senate without lying.” Kavanaugh’s college roommate announced after the nominee testified that he had not been a heavy drinker (an assertion made as part of a broader effort to discredit abuse allegations) to say that Kavanaugh had lied under oath. “Not only did I know he wasn’t telling the truth, I knew that he knew he wasn’t telling the truth,” explained James Roche. Yet, McConnell has made no effort to examine allegations that Kavanaugh was deliberately dishonest.

The issue of Kavanaugh’s credibility was not examined by the Senate because McConnell and Grassley refused to allow a serious review of the nominee’s record, or to demand a full FBI background check. This rejection of the system of checks and balances created a constitutional crisis. It is a crisis the founders of the American experiment anticipated.

“The Framers of the US Constitution understood that corruption in the process of obtaining a federal office is an impeachable offense,” note the constitutional advocates with Free Speech for People. “In the constitutional debates over the impeachment power, George Mason asked rhetorically: ‘Shall the man who has practised corruption & by that means procured his appointment in the first instance, be suffered to escape punishment, by repeating his guilt?’”