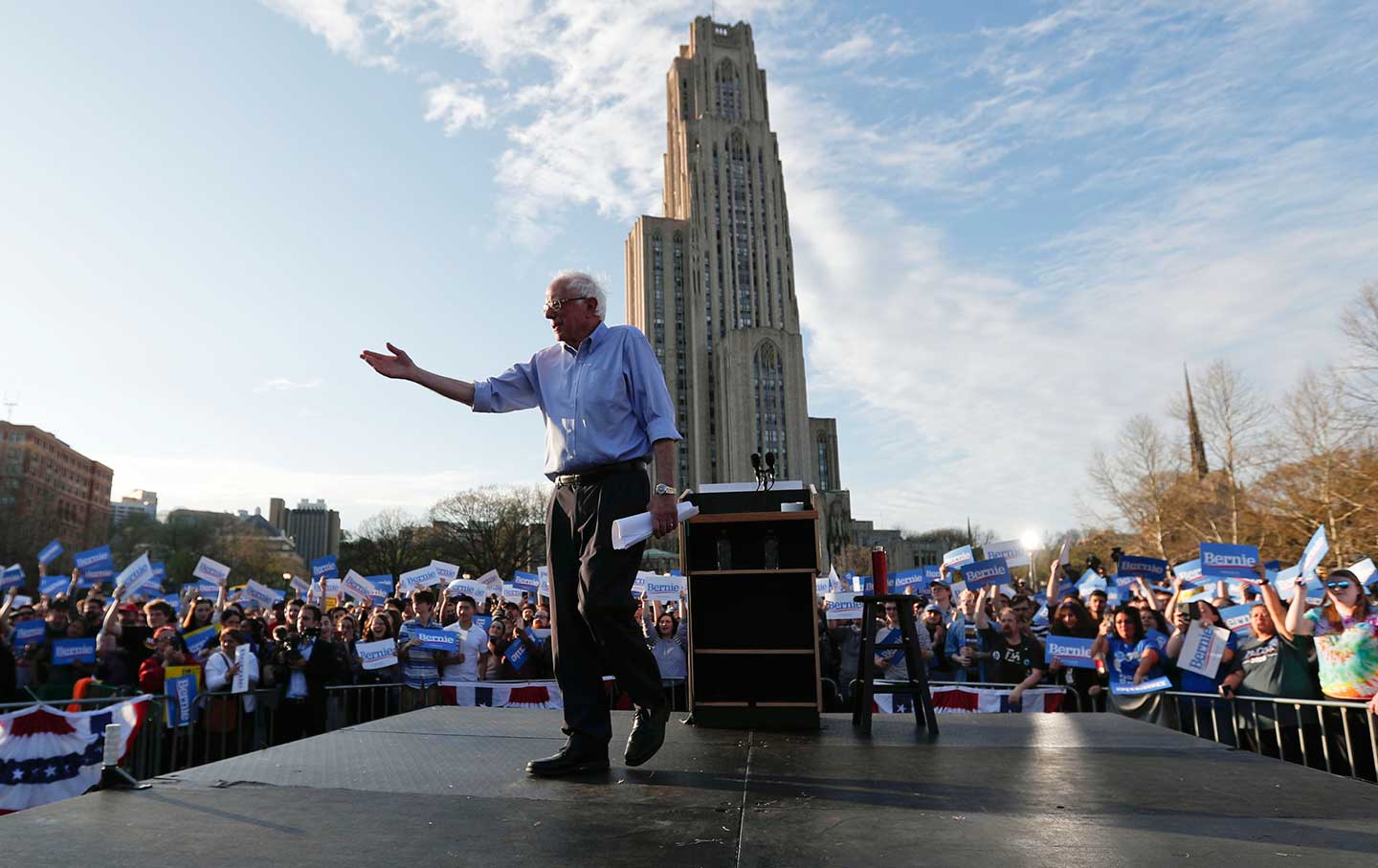 Bernie Sanders waves to a crowd at the University of Pittsburgh on April 14, 2019. (AP / Keith Srakocic)

Even as he competes with an increasingly crowded field of contenders for the Democratic presidential nomination, the senator from Vermont is focusing considerable time and creative energy on upending the best-laid plans of the Republican he hopes to defeat in 2020.

No matter who the Democrats nominate when they convene their national convention in Milwaukee next summer, the route to victory will be the same. It runs through the Great Lakes states that had reasonably well-developed patterns of backing Democrats for president right up until they failed to deliver in 2016.

The list includes Pennsylvania, Ohio, Michigan, and Wisconsin. Sanders has visited them all in recent weeks—along with Indiana, a Republican-leaning state that Barack Obama won in 2008 and that strategists believe could be competitive in 2020.

In 2016, after the first campaign in decades when the party’s nominee did not bother to visit the state during the fall campaign, Wisconsin’s electoral votes went to a Republican. Trump barely won, finishing 22,748 votes ahead of Hillary Clinton in the Badger state; but with similarly narrow victories in Michigan and Pennsylvania, the Wisconsin result was enough to give the loser of the national popular vote a Electoral College “win.”

So Sanders, who won a landslide victory in the 2016 Wisconsin Democratic primary, is showing up. He’s not alone in doing so. Minnesota Senator Amy Klobuchar made a stop in the state shortly after announcing her candidacy, and former Texas congressman Beto O’Rourke has been through several times. And plenty of contenders, including former vice president Joe Biden, are targeting Trump.

But Sanders is going deeper.

What distinguishes the senator’s campaigning in the battleground states is the consistency of his presence and his messaging, which is focused on upending Trump’s claims about job creation and manufacturing.

On April 12, Sanders delivered a fierce rebuke to the president’s approach at an outdoor rally in Madison that, despite blustery weather, drew several thousand supporters. Sanders plans to keep coming back to Wisconsin and other fall battleground states. But it’s what he and his supporters are doing when he is outside the state that could be one of the savviest strategic moves of the 2020 election cycle. While most other Democratic campaigns are focusing messaging and campaign spending on key primary and caucus states, the Sanders camp is turning energy and resources toward the Great Lakes states where Trump is already campaigning.

To this end, Sanders has made Wisconsin a test case for a challenge to the lies the president keeps telling about protecting jobs in general, and manufacturing positions in particular. Those lies are critical to Trump’s reelection strategy in battleground states such as Wisconsin. But the Sanders campaign is not giving the Republican an inch.

When Trump announced that he would hold a rally in the northeastern Wisconsin city of Green Bay on Saturday, April 27, Sanders went to work.

Green Bay is located in the Fox Valley, a historic manufacturing region of Wisconsin where many of the industries are now experiencing plant closings and job cuts. Trump tweeted on April 23: “I will be going to Green Bay, Wisconsin, for a really big Rally on Saturday Evening. Big crowd expected, much to talk about. MAKE AMERICA GREAT AGAIN!”

Sanders immediately responded, “Trump promised to protect American jobs. He lied, and workers across Green Bay and the Fox Valley have lost their jobs. When we are in the White House, we will end the corporate greed behind the Shopko closures, Kimberly-Clark layoffs and Foxconn scam.”

The senator was referencing job losses in the valley caused by the closures of Shopko department stores and the downsizing of Kimberly-Clark Corp. factories. Sanders also took a shot at the fiasco that has played out since Trump and former Wisconsin governor Scott Walker promised the Taiwan-based technology firm Foxconn $3 billion in state subsidies (now closer to $4.5 billion) in return for a wildly optimistic promise to create 13,000 jobs in southeast Wisconsin. As the company sent mixed signals about actually following through on its commitments, Walker’s already ailing 2018 reelection campaign stumbled, and he was defeated by Democrat Tony Evers.

Two days later, Sanders was back on Twitter, declaring that “Donald Trump betrayed working people in Wisconsin. Our message to President Trump as he visits Green Bay: you’re not going to get away with your lies any longer. We’ll defeat you and protect American jobs.”

The senator’s trolling of the president drew headlines in Wisconsin newspapers, along with radio and television coverage.

Then the Sanders campaign took things to the next level. On the eve of the president’s visit to Green Bay, the Twitter message was amplified by a banner ad on the top of the front page of the local daily newspaper: “Donald Trump Lied to Wisconsin Workers. In a Bernie Sanders White House, we will end the corporate greed behind the Shopko closures, Kimberly-Clark layoffs and Foxconn scam.”

On the day of the Trump event, Sanders backers rallied in Green Bay to challenge presidential claims that have never stood up to serious scrutiny.

What Sanders and his supporters are doing is sly. They won’t neglect the primaries and caucuses that are essential to winning the nomination. But instead of focusing exclusively on the competition with other Democrats, they are messing with Trump—with an eye toward exposing the president’s lies and reframing the fight for the battleground states.

Challenging Trump’s economic claims may not be all that is required for the Democrats to win back states like Wisconsin, Michigan, and Pennsylvania—and perhaps Ohio and Indiana—in the fall of 2020. The party’s nominee is still going to have to make a convincing case that she or he is prepared to respond to deindustrialization, automation, and all the other challenges faced by factory workers, historic manufacturing communities, and traditional industries.

But Sanders is making a smart start by refusing to surrender territory where Democrats once won presidential races—and where a fighting Democratic Party could win again.