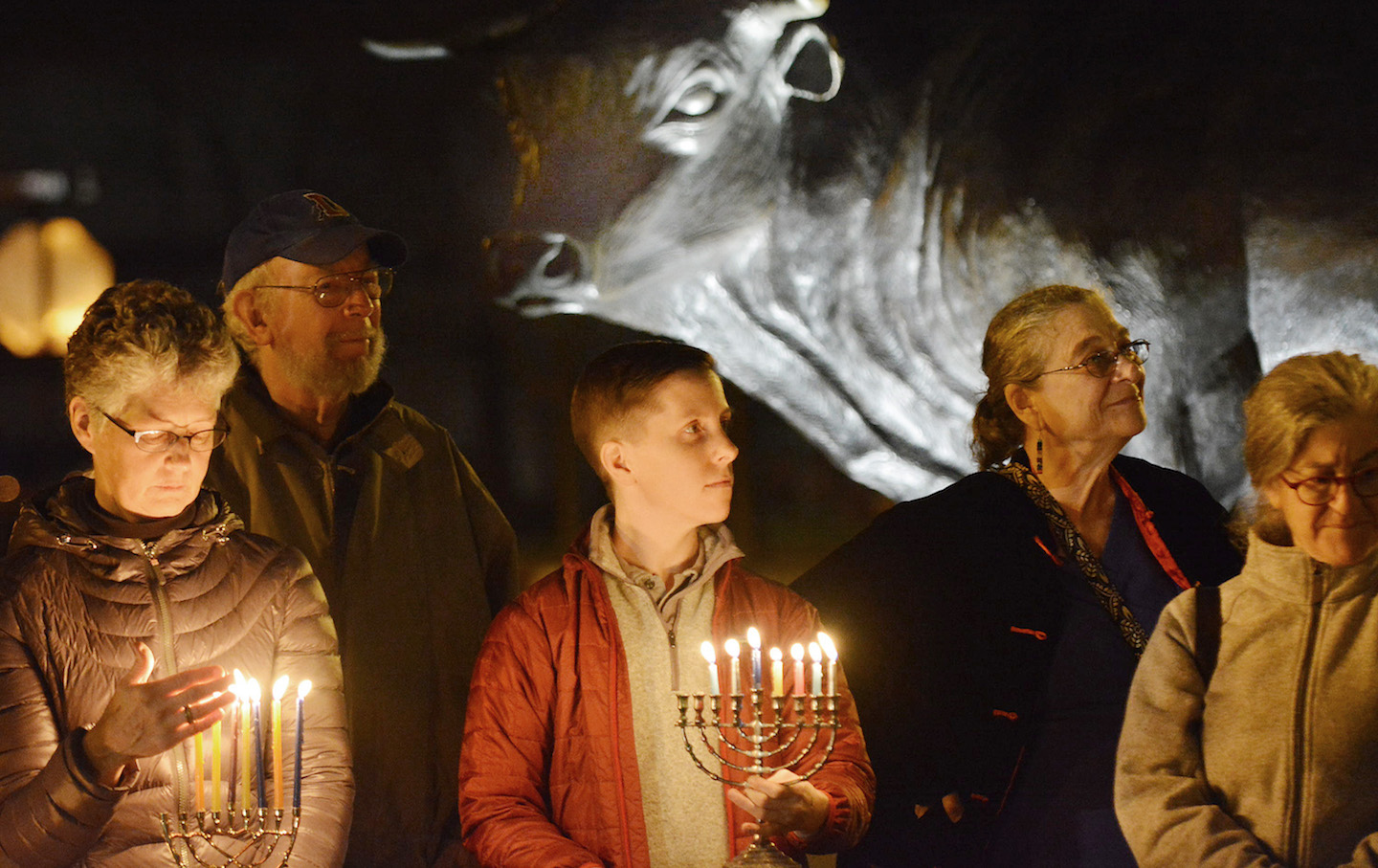 A Jewish Voice for Peace gathering in Durham, North Carolina, on Hanukkah 2015. (Photo by Bernard Thomas / The Herald-Sun / AP)

Over the past few years, especially since the 2014 Gaza war, a growing number of younger American Jews have been questioning the supposedly unquestionable bond between Jewish identity and support of Israel. Many of them have been moved to organized action to unsettle the American Jewish community’s pro-Israel consensus. In her new book, Days of Awe: Reimagining Jewishness in Solidarity With Palestinians, Atalia Omer—associate professor of religion, conflict, and peace studies at the University of Notre Dame—sets out to document and contextualize this burgeoning movement. She charts the rise of organized Jewish movements (including IfNotNow and Jewish Voice for Peace) that directly speak and act against Israel’s treatment of Palestinians, often targeting the mainstream Jewish establishment, which champions Israel and opposes dissent. She also looks at groups (such as the student group Open Hillel and the radical synagogue Tzedek Chicago) that seek to integrate more complex and critical discussions of Israel into the Jewish community. By analyzing the rhetoric, practices, and self-conceptions associated with these movements and organizations, Omer considers how a new generation of Jewish activists is making solidarity with Palestinians a central feature of their Jewish practice and identity—and is thus transforming the very meaning of contemporary Jewishness.

But how is this transformation taking place? Omer suggests that it involves a fusion of critiques of American Jewish complicity in structures of oppression and the retrieval of Jewish prophetic and ethical traditions. In Days of Awe, Omer brings together interviews with activists, historical analysis, and theoretical interventions (drawing from religious studies and social movement theory, among other disciplines), all in the service of one of the first extended studies of this growing movement of American Jews standing against the Israeli occupation, and standing up for justice for Palestinians.

Omer delves into the details of the movement’s theory and praxis, while also tracing its relationship to and intersection with other sites of struggle—for instance, against anti-Semitism, anti-black racism, and Islamophobia, and for decolonization, feminism, and queer liberation. She also probes the movement’s possible limits. She offers sophisticated, sympathetic critiques and asks what untapped intellectual resources might complicate the movement’s preconceptions while also advancing its aims.

I spoke with Omer by phone for this interview. Our conversation has been edited for length and clarity.

Nathan Goldman:What was the impetus behind the research that would become Days of Awe? How did it develop over the years you were working on it?

Atalia Omer: Initially, I wanted to do some comparative work. I was trying to get away, actually, from an exclusive focus on Israel-Palestine. But the more I started talking to American Jewish diaspora activists, the more I realized that there was a really important story there to focus on. I saw that it needed to have its own book. 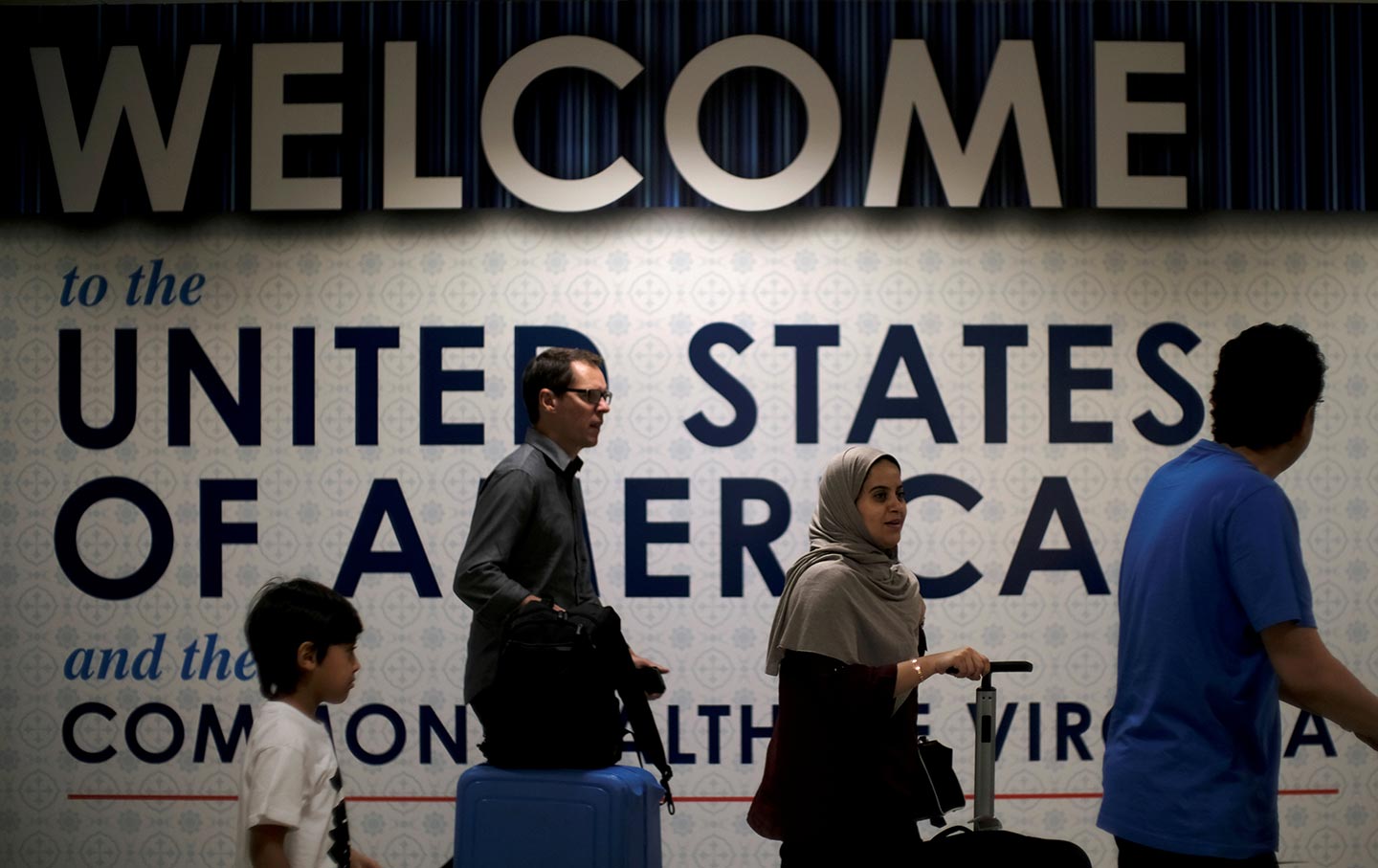 NG: You argue that when Jewish anti-occupation and Palestine solidarity activists deploy Jewish religious ideas, liturgies, and ritual in protests, it’s not just an instrumental political tactic. Rather, by actively engaging religious practices, texts, and symbols, Jewish activists are actually transforming their meaning in a religious sense. How does that distinction manifest itself?

AO: To start with, the reinterpretation of Jewish symbols, holidays, and liturgies as forms of protest is used to shock and confront the Jewish establishment. The movements use the establishment’s language, which makes it a very effective form of protest. When, for instance, activists build a sukkah in front of the embassy on Sukkot to protest ethnic cleansing of Bedouins, it has a particular impact. That’s the instrumental impact. But also, when I talked to people who participated in those kinds of protests, some of them talked about how, for the first time, they felt welcome and at home and consistently Jewish. In that space of protest, and in the very act of protest, they also rediscovered what it meant to be Jewish. So this becomes something that moves beyond just fighting the occupation or particular policies.

NG: How is that use of the Jewish establishment’s language against itself related to rediscovering what it means to be Jewish?

AO: Jewish anti-occupation and Palestine solidarity movements, such as IfNotNow and Jewish Voice for Peace, use the language of “transforming the Jewish community.” This involves a sense of anger against the elders: the establishment, the educational institutions, the various summer camps and day schools. All that goes beyond just fighting Israeli policies, and how they pretend to represent Jews worldwide and American Jews specifically. It goes beyond the complicity of the American Jewish establishment in enabling the occupation through financial support and political lobbying. Jews in these movements come to feel and say, “My Judaism is not occupation.” But then there comes the recognition that they need to also ask, “Well, what is my Judaism?”

I missed it, but the day before Passover this year, the radical synagogue I attend, Tzedek Chicago, invited Omar Barghouti, the cofounder of the BDS movement, to speak. He was stopped by a US immigration agent in Tel Aviv, and he wasn’t allowed to come. But he still talked to us over Skype. Even though he couldn’t come physically, it was meaningful that he came to a Jewish space. He talked about liberation struggle on the eve of Passover. That moment was meaningful, beyond the question of how it can help the movement. And it’s important for us to think beyond that instrumental level, to generate some sort of constructive reimagining.

NG: In the book, sociologist James M. Jasper’s notion of “moral battery” and your own idea of “critical caretaking” are two of the key concepts you use to understand how anti-occupation and Palestine solidarity activism can lead to this reshaping of the communal definition of Jewishness. Could you briefly explain those concepts and how they function here?

AO: “Moral battery” comes from Jasper’s study of social movements and their mechanics. It describes something I saw and felt in my research, especially during the delegation to the West Bank I went on with the Center for Jewish Nonviolence. There’s the electrifying sense of that communal space. Durkheim calls it “collective effervescence.” Jasper talks about it in terms of the negative and positive of a battery. On the one hand, standing in the southern hills of Hebron, it’s devastating, it’s horrific. You have a feeling of ethical outrage and disgust, and a sense of “this is not my Judaism.” That’s the negative. But the very act of engaging in solidarity, taking directives from the other—in this case, from the Palestinian partners—that creates this electrifying sense of love, and of self-love. That’s the positive. And that combination generates a sense of force and transformative capability.

My concept of “critical caretaking,” which I started to develop in my first book, is about bringing religion into conversations about addressing and transforming violence. This always involves a process of critique—of historicizing identities, historicizing narratives, of “unlearning” (which is the language that the activists often use). But there’s also caretaking of the religious tradition, which is the constructive sense, and requires religious, cultural, and historical literacy. So I’m putting the critical lens and the constructive practices together. They need to come together. Reimagination needs both to be deeply historical and to have that opening for innovation and change. The effort of reshaping the communal self operates multidirectionally.

NG: Much of the activism you discuss in the book relies, at least to some extent, on social media. What do you see as social media’s role in contemporary Jewish anti-occupation and Palestine solidarity activism?

AO: It’s absolutely critical. So many of the activists, especially the young activists, really want to have their stories out there: their stories of transformation and change. For instance, when they go to the occupied territories and come back. It’s a tool to reach out to broader publics, and to educate, and to generate counter-narratives. Especially since in mainstream Jewish formal spaces there are so many restrictive practices, like the policing of questioning. And the movements produce a lot of the reimagining of Jewishness online. Blogs become spaces for alternative liturgies, for the weekly parashot—readings from the Torah—which often reinterpret.

NG: Are there broad lessons that the forms of political work you’ve examined in Days of Awe hold for radical political movements in general?

AO: One of the fascinating facets of these Jewish movements against the occupation and for Palestine solidarity relates to how they participate within a broader struggle for justice. The way, for instance, that Jewish Voice for Peace and IfNotNow understand that they need to fight for the interconnectedness of all the sites of struggle. That they need to fight against homophobia in the US, and that this is absolutely related to the other questions that they’re talking about.

These movements also understand the necessity of focusing on discourse and narrative. They know they need to find ways of changing the story, changing perceptions, changing narratives. Because there is a broader realization on the part of the activists that they’re not only fighting to end the Israeli occupation that is happening in their name, but also, they need to transform the community. So thinking about how to do that really brings to the fore some humanistic engagements: art and very broad coalitions, and actual alternatives—imagined alternatives.