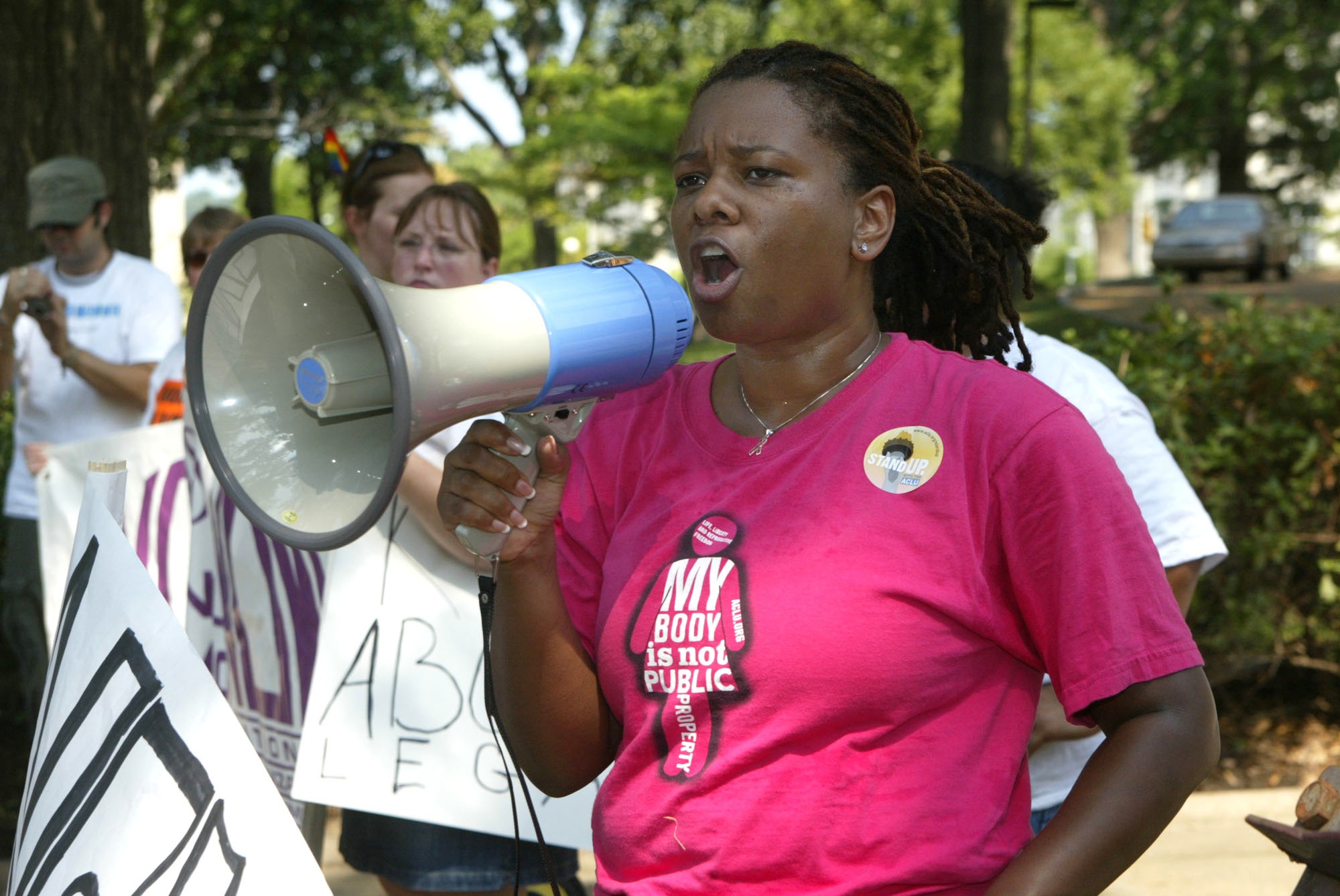 An advocate talks about abortion rights to a crowd of supporters during an ACLU march. (AP Photo / Charles Smith)

In April, abortion became even harder to access in Alabama. Apparently believing that it was too easy for teens in the state to obtain the procedure, legislators passed a law allowing courts to put minors on trial if their parent or guardian hadn’t given consent. The fetus can be appointed an attorney, and that lawyer as well as the district attorney are allowed to violate the teen’s privacy by calling people such as teachers and guidance counselors to testify. The ACLU challenged the law last week.

Alabama’s new law represents a departure from how parental involvement laws work in the thirty-seven other states that have them. In states where a guardian must be notified or give consent before a teenager can get an abortion, there’s a kind of safety valve built in, known as judicial bypass. If a teen decides that she can’t or won’t tell a guardian, she can go in front of a judge charged with determining whether she’s capable of making the decision on her own. Many parents read about the debate around parental notification and consent and think, “Of course I’d want to know if my child were grappling with this decision.” But even the Supreme Court has acknowledged that when it comes to access to abortion, minors have rights that can’t be trumped by an adult’s opposition. A young person may not want to involve an adult in her decision because she believes that the disclosure will put her safety at risk. Sometimes there’s abuse within the family, or the guardians have made it clear that they’ll throw the teen out of the house if rules are broken.

As director of the Illinois Caucus for Adolescent Health, a youth-focused reproductive justice organization based in Chicago, Yamani Hernandez works to protect the rights of teens. Illinois has had its latest parental notification law on the books since 1995, though it wasn’t enforced until August of last year. ICAH is running a state-based campaign to repeal it, and the organization also works with national groups around similar state laws.

“It is a national problem,” Hernandez told me this week. “Our law is bad, but the Alabama law is even a further violation of privacy.”

Does judicial bypass work effectively, even without the additional hurdles the Alabama law presents? Youth voices on the topic, such as those included in a Chicago study of teens’ take on parental notification, are hard to come by. Most of the thirty pregnant minors seeking abortions who were interviewed for the study felt that judicial bypass was confusing, humiliating and stressful. As one 17-year-old put it, ” …If you don’t know where to go, you don’t know how to make an appointment with a judge or…it’s hard. Especially if you’re like my age because I wouldn’t know what do. I would have no clue.” A 16-year-old said, “Yeah, I don’t think I would go in front of a judge and you have all this stuff going on in your life…. and you have to go sit in front of a judge and talk to him about getting an abortion? That’s kind of crazy.”

This spring, the Chicago Reader reported that all of the Illinois teens represented by free attorneys coordinated by the state ACLU had been granted judicial bypass. But, of course, this doesn’t take into account young people who didn’t use that resource or who didn’t go in front of a judge at all, either because they were too afraid or misinformed. Hernandez said she sometimes meets with resistance when she encourages young people to use the judicial bypass process. Making their case in front of a judge can feel like an insurmountable obstacle. “A lot of young people already have a problematic relationship with the legal system,” Hernandez said. “They’d rather not go through that at all. [They say] ‘I would rather figure out how to get it done elsewhere.’”

When I asked whether that typically means traveling to a state without parental involvement laws, she said no. “They mean ‘going to my cousin’s house’ and figuring it out. Or, ‘I know a lady who knows about that,’” Hernandez said, referring to terminating a pregnancy without the help of a legal, trained medical provider.

After all, even if a teen could pull together the money for travel and lodging away from home, which state would she go to? Until last year when its notification law went into effect, Illinois was an oasis in the Midwest for youth abortion access. Now the closest state may be New York or Montana, which has a parental notification law that’s not enforced.

Hernandez, who is mother to a teenager, said she’s often asked how she can oppose laws that serve to “strengthen” families.

“I’m pro-parent but anti-parental notice,” she said, and pointed out that too many families lack a culture in which teenagers feel they can speak to adults about sex and not be judged. And given the real dangers some teens face at the hands of their guardians? “I think that young people should be able to make decisions about their bodies without being forced to notify,” she said.