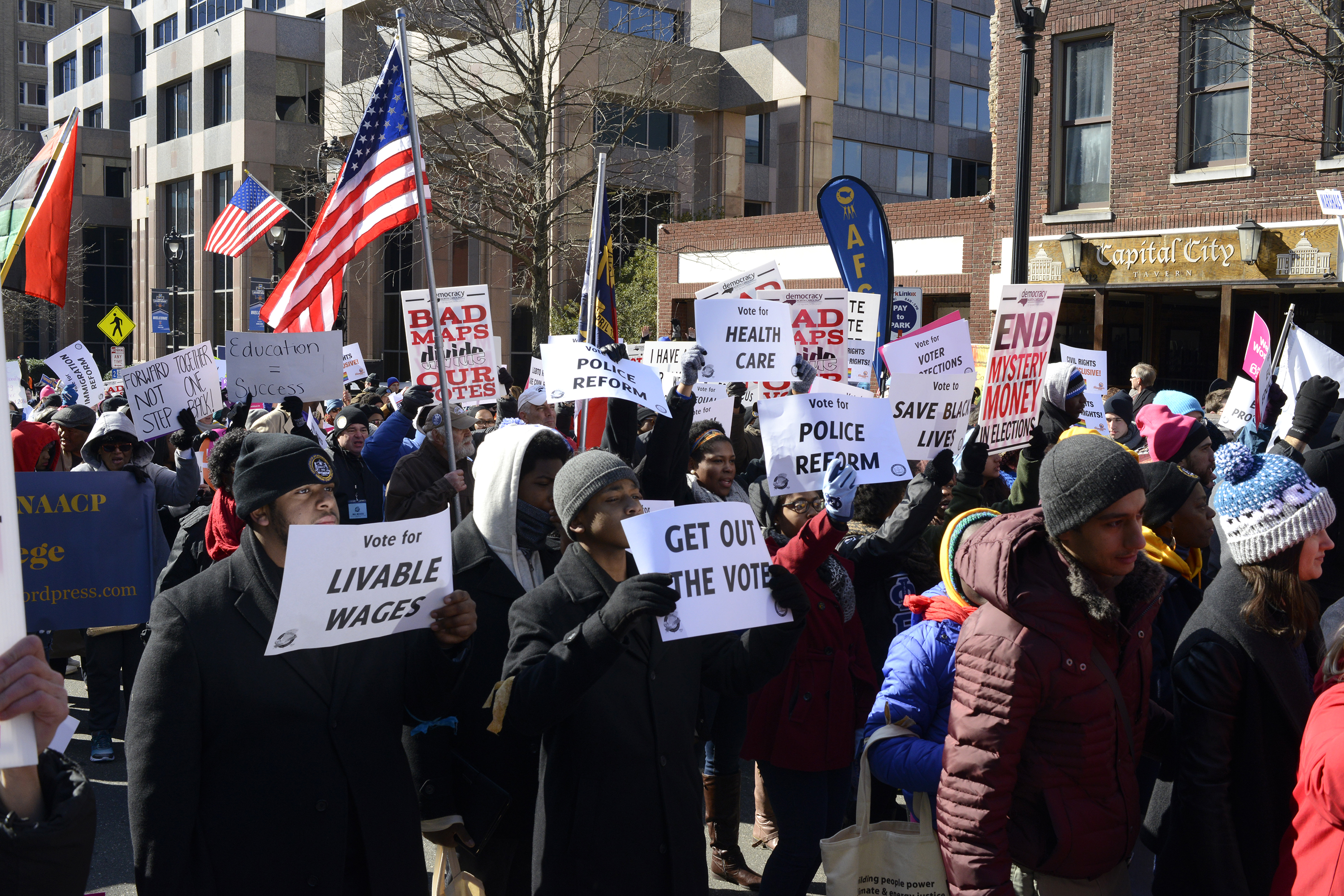 As presidential candidates have headed south to sell their visions of a new America, political strategists have begun calculating which dissatisfied Southerners their candidates should target. Meanwhile, the Moral March on Raleigh, North Carolina, on February 13 showcased the kind of movement that can actually change America. This 10th annual People’s Assembly was made up of black, white, and brown; gay and straight; rich and poor; labor and civil rights; Democrats, Republicans, and Independents; people of faith and people whose moral visions are rooted in reason or politics. Planned Parenthood advocates marched in pink hats alongside evangelicals, singing the same freedom songs. Black Lives Matter activists linked arms with elderly white veterans. The Moral March did not rally around a messiah candidate but challenged all leaders to serve the common good with policies that are morally sound, constitutionally consistent, and economically sane. While a kaleidoscope of campaigns vie for everybody’s attention, this long-term, grassroots coalition to reconstruct democracy in America is a movement to hold all candidates accountable.

The coalition that rallied in Raleigh on February 13 first came together 10 years ago, when Democrats controlled the state government. After years of advocating for single issues, the leaders of 14 different organizations sat down together and asked one simple question: Who consistently blocks our efforts? One after another, we named powerbrokers in the state establishment. So we asked an important follow up question: If they are cynical enough to stand together, why can’t we be smart enough to work together?

We knew it had been done before. After the Civil War, newly freed African Americans found common cause with white North Carolinians, wrote a new state constitution and founded the South’s first public-school system. In the 1890s, their political descendants formed an interracial “Fusion coalition” of white populists and black Republicans, which won the governorship and every state-wide office in 1896. White conservatives overthrew the Fusionist government by force and fraud, installing a one-party state that disfranchised blacks and ushered in lynch law and Jim Crow segregation. Still, the memory of fusion politics did not die. The sit-in movement, which began in Greensboro, North Carolina, in 1960, offered a vivid image of the new America that a Second Reconstruction proposed—a common table where black and white could sit down together. Violence could not destroy their nonviolent movement, so elites conspired to divide-and-conquer by appealing to old fears through the Southern Strategy. Politicians like Strom Thurmond and Jesse Helms took power by replacing the n-word with the language of “states’ rights,” “forced busing,” and “law and order.”

North Carolina’s 21st-century fusion coalition interrupted that divisiveness in 2006. Locking arms around a moral agenda, organizations pledged to stay together until every issue was won. Our movement did not court the favor of any party or candidate. The language of conservative versus liberal was too narrow. This was a moral movement, and it required the rich language of our deepest religious and constitutional traditions.

A coalition that began with 14 groups a decade ago is now made up of over 200 organizations that put thousands of people on the streets of Raleigh in sub-freezing temperatures for this year’s Moral March. Still, the numbers alone do not tell the story. To understand the political reality that the Moral March represents, you have to listen to Republican Mayor Adam O’Neal tell the story of how, when a corporation closed the hospital in his town after Governor Pat McCrory refused to expand Medicaid, O’Neal joined hands with the NAACP and formed a fusion coalition to save their hospital. Here, Black Lives Matter isn’t just about criminal-justice reform. It’s also about ending the state’s denial of Medicaid to the poor that has killed more black, white, and brown people than any police action.

Twenty-first-century fusion politics looks like 95-year-old Rosanell Eaton, who is challenging voter suppression laws in federal court. It is Planned Parenthood speaking up for voting rights while Black Workers for Justice cry out for women’s access to healthcare. It is a retired Methodist pastor bowing his head reverently while a young Muslim leads the crowd in prayer. It is a public school teacher standing for workers while a factory worker insists his child’s teacher deserves a just wage. Fusion politics is a friendship—20 years in the making now—between a black man who once worked for a Democratic governor and a white man who worked for a Republican senator. This America has worked together for 10 years to produce the largest People’s Assembly in the country this year. This is the America we must become.

Whatever promises political candidates make on the campaign trail, only a moral, fusion coalition, building from the ground up in every state can hold them accountable. America needs a Third Reconstruction that draws lessons from our past while addressing a new day when a white majority becomes one of many minorities. The question of this year’s campaign is not which candidate deserves the black vote, the Latino vote, or the evangelical vote. The question the Moral March asks of each candidate is whether they will serve the moral agenda of this people’s movement or the partisan platforms of our broken political system.