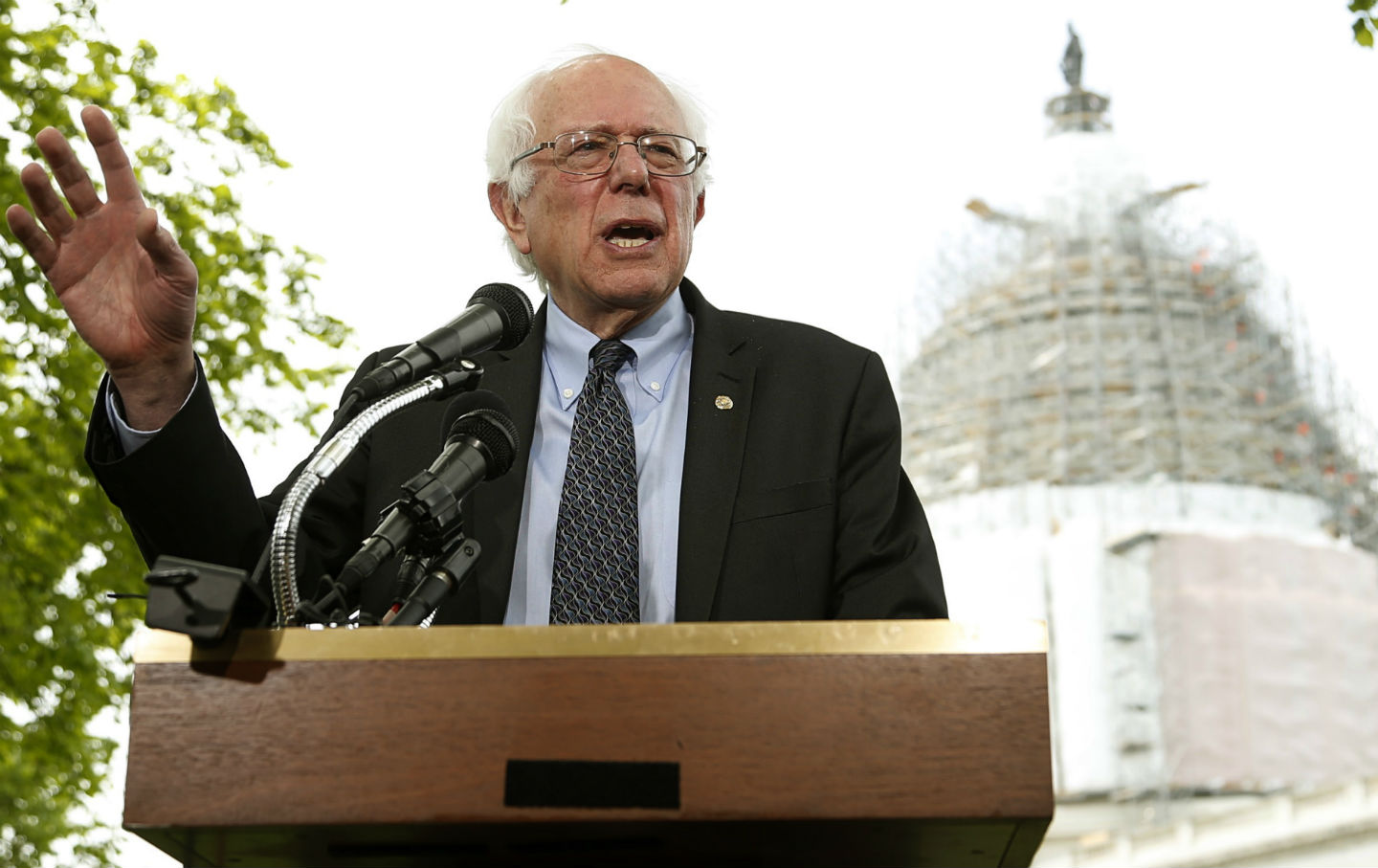 Vermont Senator Bernie Sanders is running for president. And despite the fact that he is the longest-serving independent in Congress, he says that “after a year of travel, discussion and dialogue, I have decided to be a candidate for the Democratic nomination for president.”

Sanders, who formally announced his candidacy in a series of statements this week, is not actually running against former secretary of state Hillary Clinton, who announced her candidacy earlier in April. Rather, both Sanders and Clinton are seeking the nomination of the party. They may be joined by others: former Maryland governor Martin O’Malley, former Virginia senator Jim Webb and former Rhode Island senator (and governor) Lincoln Chaffee. Draft initiatives are still trying to entice Massachusetts Senator Elizabeth Warren and Vice President Joe Biden into the competition.

By most measures, Clinton is a first among equals. She has dramatically higher name-recognition than Sanders or any of the other prospects. She is way ahead in the polls. And most commentators are convinced that she is not merely a candidate for the nomination but the Democratic nominee in waiting.

Perhaps they are right, although Sanders counsels, “People should not underestimate me. I’ve run outside of the two-party system, defeating Democrats and Republicans, taking on big-money candidates and, you know, I think the message that has resonated in Vermont is a message that can resonate all over this country.”

Even if Clinton is “inevitable,” however, she needs to debate Sanders and the other contenders. Clinton debated her opponent in her 2000 Senate race; she participated in a number of debates during her 2008 presidential run; and her campaign has indicated that she is open to debating this year.

That’s good, not just because there is much to debate but because debates are good for all candidates—including front-runners. There is plenty of history to remind us that front-runners who win their nominations in honest competition tend to be better prepared for the fall fight than those who avoid it.

No matter who else gets into the race, a Clinton-Sanders debate would be a lively, issue-focused exchange between two candidates who know and respect each other but are very different. Not long after Sanders traveled to the 1963 March on Washington for Jobs and Freedom, Clinton was a youthful campaigner for Barry Goldwater—the first step on an political evolution that would four years later see her backing Eugene McCarthy’s insurgent primary challenge to Democratic President Lyndon Johnson. While Clinton’s first elective post was a US Senate seat, Sanders has been a mayor, a statewide candidate, a congressman, and a senator. The New York Times reports that Clinton’s “finance team and the outside groups supporting her candidacy have started collecting checks in what is expected to be a $2.5 billion effort, dwarfing the vast majority of her would-be rivals in both parties.” Sanders rips “plutocrats” and “the billionaire class” that funds campaigns.

But the issues are the heart of the matter. Clinton and Sanders are not always at direct odds with one another, and Clinton has since announcing her candidacy sent a number of progressive populist signals. But there are real distinctions between these two candidates.

Here are six degrees of separation between Bernie Sanders and Hillary Clinton:

Clinton has not taken a stand on granting President Obama so-called “fast track” authority to negotiate a sweeping Trans-Pacific Partnership. Nor has she taken a clear stand with regard to the TPP itself. As secretary of state, however, she referred to the TPP as the “gold standard in trade agreements.” Now, her campaign says, she is “watching closely” as the TPP fight evolves.

Sander is a leading opponent of NAFTA-style “free trade” deals. He says, “All Americans, regardless of political ideology, should be opposed to the ‘fast track’ process which would deny Congress the right to amend the treaty and represent their constituents’ interests.” He has rallied workers and environmentalists against the deal, saying, “Let’s be clear: the TPP is much more than a “free trade” agreement. It is part of a global race to the bottom to boost the profits of large corporations and Wall Street by outsourcing jobs; undercutting worker rights; dismantling labor, environmental, health, food safety and financial laws; and allowing corporations to challenge our laws in international tribunals rather than our own court system.”

No one is more identified with healthcare reform than Hillary Clinton. Yet, during the presidency of Bill Clinton, she rejected proposals that the United States follow the lead of other developed countries and create what is often referred to as a “Medicare for All” system. She knows healthcare issues well but continues to be an incremental reformer. Clinton says, “I never seriously considered a single payer system.”

Sanders has for many years sponsored an American Health Security Act, which would “guarantee healthcare as a human right and provide every U.S. citizen and permanent resident with healthcare coverage and services through a state-administered, single-payer program.”

3. Amending the Constitution to Get Corporate Money Out of Politics

Clinton earned a lot of notice, and justifiably so, when she said in Iowa, “We need to fix our dysfunctional political system and get unaccountable money out of it once and for all—even if it takes a constitutional amendment.”

Sanders is already there. He says it will take a constitutional amendment, and he has sponsored one that declares: “Nothing in this Constitution shall be construed to restrict the power of Congress and the States to protect the integrity and fairness of the electoral process, limit the corrupting influence of private wealth in public elections, and guarantee the dependence of elected officials on the people alone by taking actions which may include the establishment of systems of public financing for elections, the imposition of requirements to ensure the disclosure of contributions and expenditures made to influence the outcome of a public election by candidates, individuals, and associations of individuals, and the imposition of content neutral limitations on all such contributions and expenditures.”

As the US senator from New York, Hillary Clinton voted for the Patriot Act in 2001. Later, to her credit, Clinton backed calls for an investigation of whether President Bush signed an executive order in 2002 that approved of domestic spying without oversight from the courts. “The balance between the urgent goal of combating terrorism and the safeguarding of our most fundamental constitutional freedoms is not always an easy one to draw,” she said. “However, they are not incompatible, and unbridled and unchecked executive power is not the answer.” Still later, however, she voted for reauthorization of the act.

Along with Wisconsin Senator Russ Feingold, Sanders (then a member of the House) voted against the Patriot Act in 2001. He also opposed its reauthorization in 2006 and 2011. “As one of the few members of Congress who consistently voted against the Patriot Act, I expressed concern at the time of passage that it gave the government far too much power to spy on innocent United State citizens and provided for very little oversight or disclosure,” says Sanders. “Unfortunately, what I said turned out to be exactly true.”

As the US Senator from New York, Hillary Clinton voted in 2002 to authorize President Bush to prepare for military action against Iraq.

Sanders voted against the authorization of the use of military force. (Notably, another Democratic prospect, Chafee, voted “no” as a liberal Republican senator from Rhode Island.)

No matter what her right-wing critics might claim, Hillary Clinton is not a socialist. (Her thoughtful college thesis on organizer Saul Alinsky mentioned five-time Socialist Party presidential candidate Eugene Debs, but only in the company of Walt Whitman and Martin Luther King as an American who “embraced the most radical of political faiths—democracy.”)

Sanders is, arguably, America’s best-known democratic socialist. Like authors Gloria Steinen and Barbara Ehrenreich, scholar and voting-rights champion Frances Fox Piven, United Farm Workers leader Dolores Huerta, and many others, Sanders identifies with what Ehrenreich refers to as “the tradition carried on by Eugene Debs, Mother Jones, Elizabeth Cady Stanton, and thousands more.” Sanders says, “[When] I talk about democratic socialism, what I’m saying is that I do not want to see the United States significantly dominated by a handful of billionaire families controlling the economic and political life of the country. That I do believe that in a democratic, civilized society, all people are entitled to health care as a right, all people are entitled to quality education as a right, all people are entitled to decent jobs and a decent income, and that we need a government which represents ordinary Americans and not just the wealthy and the powerful.”