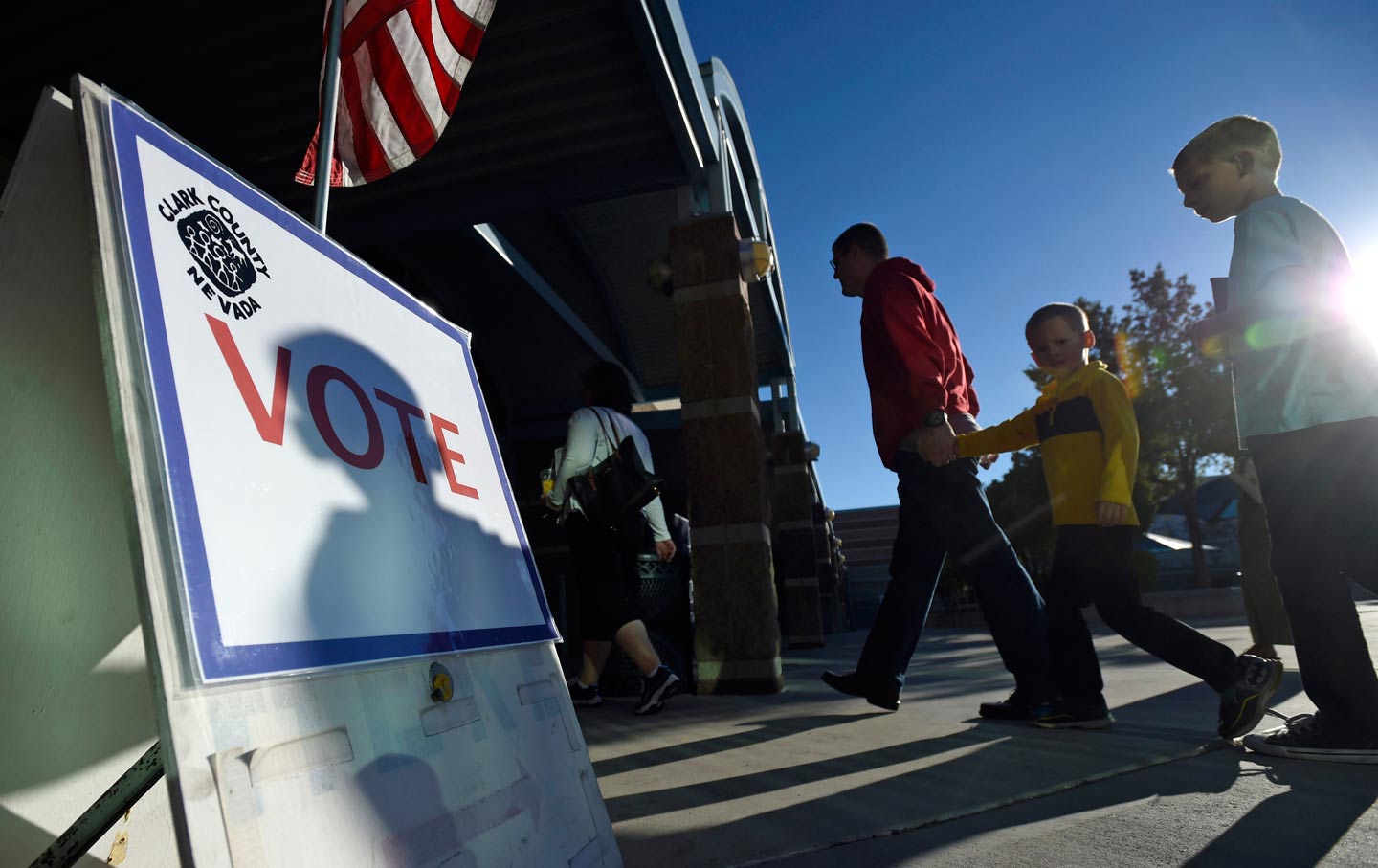 Voters enter a polling station to cast their ballot during the 2016 presidential election in Las Vegas, Nevada, on November 8, 2016. (Reuters / David Becker)

Secure Muslim, black, and immigrant communities from vigilante violence
Threats of violence should never be taken lightly, but the recent arson at a black church in Mississippi is an indication that we’re dealing with more than ugly threats. For many communities, targeting by vigilantism is not new. But Donald Trump’s campaign has created a heightened culture of violence directed at black, Muslim, refugee, and immigrant communities. New measures to ensure the safety of these communities are urgently needed.1

Challenge misogyny and end the cultural tolerance of sexual violence
If there was one silver lining in the “Trump Tapes” scandal, it was the survivors of violence who stepped forward, spoke up, and took action. Thousands of women broke the silence, including more than a dozen of Trump’s victims over the years. Building on this momentum, we have the opportunity to make a real breakthrough in transforming our cultural tolerance of sexual violence, once and for all.2

Address inequality and economic insecurity in America
Economic inequality is one of the most fundamental trends driving the polarization of our nation. The cost of living continues to increase while wages have not, and jobs that pay enough to support a family have disappeared. We must place low-income people at the center of the policy conversation about the bold measures needed to address economic insecurity and prioritize the revival of social mobility for all of us.3

Listen deeply to people who are different from us
Our country is diversifying racially and generationally. At the same time, we have grown more segregated from one another, by income, race, and geography. We need more courageous thinking about how to bridge those differences. Creating proximity and well-planned conversations that build trust across difference is essential to a democracy where everyone feels represented and connected. Each of us must cultivate a willingness to be vulnerable and step outside our comfort zones. Our future as a nation depends on it.4

Establish a moral compass in American political life
The American electorate is distressed and cynical. To turn the tide on rising cynicism, we must raise the moral standard to which we hold accountable politicians of both parties. They should focus squarely on achieving opportunity, dignity, and well-being for the greatest possible number of people. And we should demand that our elected leaders lead on that basis. Our problems are too great, and too much of our political conversation is a distraction from what matters most. 5

Cultivate a new generation of political candidates
We live in a country full of talented, creative leaders. And yet we often find ourselves wishing we had better choices for public office. That can change. The largest, most diverse generation in history, millennials, are turning 35, and many have been leading in their fields for some years now. We have a nation full of potential “next greatest presidents of all time,” but we need to cultivate and support them. And we need to make elected leadership in American politics a better life choice, particularly for women and women of color. 6

Foster vibrant and respectful political and policy debate
There are two dominant responses to difference or disagreement in politics: hyper-ideological confrontation that cements us into hostile positions, or avoidance—the all-too-familiar default of mainly talking to people who agree with us. These responses set strict limits on what can be achieved. We need constructive debate that surfaces and addresses the real differences that exist. And we need a political culture that is about solutions, rooted in data, with the explicit goal of making life in America better for all.7

Make election day a national holiday
Someone once said, “Democracy is not a spectator sport.” Democracies rely upon the participation of the people. And yet so many people don’t vote. There are many things that governments can do to support citizen engagement in the democratic process. It’s time to implement more of those practices, including strengthening voting rights and voter protections, making Election Day a national holiday, and training a corps of citizen-volunteers to protect the integrity of the vote, both before and on election day.8

Organize. Vote. Organize.
Voting is key. Everyone should do it. In fact, if you’re reading this and you haven’t yet voted, you should stop reading and go vote. But what happens in between elections is equally as important. It is the week-to-week engagement of people in their communities that will lead to more participation on Election Day. It’s a virtuous cycle. The process of organizing–listening to people, identifying solutions to problems, working collectively to achieve those solutions, and then seeing the impact of that work—gives people reason to believe that participating in public life makes a difference.