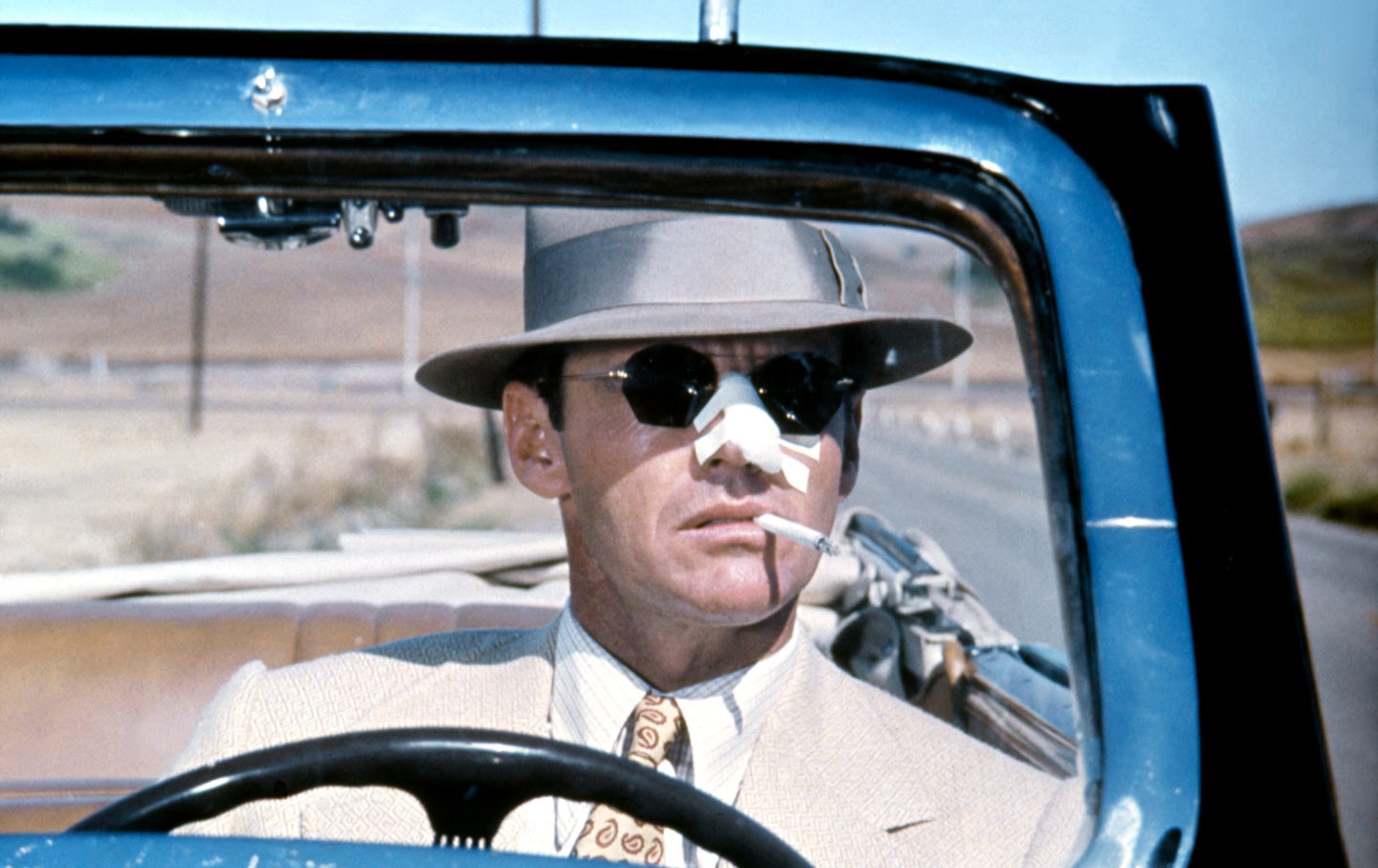 Jack Nicholson on the set of Chinatown.

Hollywood just can’t let go of the 1970s. It was arguably the decade of its most fertile creative turmoil, a storied period where the old studio system bosses, worried about losing touch with younger viewers, gave a remarkable degree of freedom to a rising generation of auteurs who would expand the horizon of American cinema. Out of this new freedom emerged a heightened tension between tormented personal storytelling (as in Martin Scorsese’s Taxi Driver from 1973) and roller-coaster summer blockbusters (as in Steven Spielberg’s Jaws from 1975).

In the last few years, there’s been an unusual tendency to square this circle by getting fantasy potboilers to pay homage to 1970s classics. Joker (2019), although about a Batman villain who dresses like a clown while committing crimes, lifted with a liberal hand visually and thematically from two Scorsese masterworks, Taxi Driver and The King of Comedy (1982). In 2017, two movies about fantastical monkeys—Kong: Skull Island and War for the Planet of the Apes—were rife with allusions to Francis Ford Coppola’s Vietnam War epic Apocalypse Now (1979).

Roman Polanski’s Chinatown (1974) is about to get the same bizarre tribute. Matt Reeve, director of the forthcoming The Batman, said that the latest iteration of the caped crusader will take inspiration from Chinatown. This is only one of two connections between Batman and Chinatown. Ben Affleck, who played the Dark Knight in Batman v Superman: Dawn of Justice (2016) and Justice League (2017, remade as Zack Synder’s Justice League in 2021) is writing and directing a movie about the making of Chinatown, based on Sam Wasson’s new book, The Big Goodbye: Chinatown and the Last Years of Hollywood.

Perhaps The Batman will be a fine movie, but it is hard not to be suspicious of all these salutes and celebrations of 1970s cinema done at a time when Hollywood is moving further and further away from the actual values of the best movies of that decade. The truly great 1970s American movies, even when they were set in the past, reflected the legitimacy crisis unleashed by the Vietnam War and Watergate.

The 21st century movies that allude to the earlier films are mostly stylistic exercises: pastiches that borrow a surface sheen but lacks the probing, troubled intelligence of the originals. They are like cover bands that mimic the lyrics and the moves of the great rock-and-roll stars but lack energy and spirit. They exude the rancid smell of nostalgia gone bad.

Chinatown is an interesting film to pay homage to, because it’s a great movie that is also an exercise in the higher form of nostalgia, using the past not for period style but as a way to uncover social myths. Chinatown was made during a tide of nostalgia for the noir films and crime fiction of the 1940s. Screenwriter Robert Towne was inspired by the account of California history in Carey McWilliams’s Southern California Country: An Island on the Land (1946) and an article about crime novelist Raymond Chandler, whose Philip Marlowe novels are among the classic depictions of mid-20th century Los Angeles. (McWilliams was a longtime Nation editor.)

The late 1970s and early ’80s were when Chandler and Dashiell Hammett, as well as the films they inspired, were coming back into vogue. Chinatown repeatedly tips the hat to the older noir genre: A scene where sign painters are scraping off the name of a murdered man from his former office is a direct allusion to a similar scene in The Maltese Falcon (1941). To underscore the point, John Huston, the director of the latter noir classic, plays Noah Cross, the truly monstrous villain of Chinatown.

The critic Pauline Kael, who had mixed feelings about the movie, described Chinatown as a “nostalgic thriller, in the style of Hammett and Chandler.” She added,

You can feel the conflict between the temperaments of the scriptwriter, Robert Towne, and the director, Roman Polanski. In Towne’s conception, the audience discovers the depth of the corruption along with the romantic-damn-fool detective J.J. Gittes (Jack Nicholson). Polanski, whose movies don’t leave you anything to hang on to, turns the material into an extension of his world view: He makes the LA atmosphere gothic and creepy from the word “go.” The film holds you, in a suffocating way. Polanski never lets the story tell itself. It’s all over-deliberate, mauve, nightmarish; everyone is yellow-lacquered, and evil runs rampant. You don’t care who is hurt, since everything is blighted. And yet the nastiness has a look, and a fascination.

In a separate essay, she wrote, “The success of Chinatown—with its beautifully structured script and draggy, over-deliberate direction—represents something dialectically new: nostalgia (for the thirties) openly turned to rot, and the celebration of rot.” This seems a misreading of the film: It is not celebrating the rot of nostalgia but rather decrying it.

The detective and nominal hero of Chinatown, J.J. Gittes is the compatriot of Chandler’s Philip Marlowe and Hammett’s Sam Spade, but inhabits a universe that is even bleaker and more nihilistic than the one they lived in. Chandler and Hammett took pride in writing crime stories that avoided the glamorous country-house milieu then common to detective stories. Instead, they had their heroes walk what Chandler called “the mean streets.”

Yet Chandler and Hammett still had their own form of romanticism by giving their heroes a basic code of ethics that remains admirable even amid the corruption of the world. Chinatown dares to ask whether even that hero’s code means anything in the light of a thoroughly tarnished society, one where the politicians and cops are all in the pockets of the rapacious rich. Gittes is in fact the instrument through which evil triumphs.

Polanski’s real-life crime, the 1977 rape that led him to flee the United States, only serves to underscore the film’s portrayal of the pervasiveness of evil. The director of Chinatown is a monster. Unfortunately, his ability to evade justice echoes the bleak plot of his movie.

Chinatown remains a bracing antidote to nostalgia. Its corrosive spirit is unlikely to be honored by any nostalgic invocation in the 21st century.