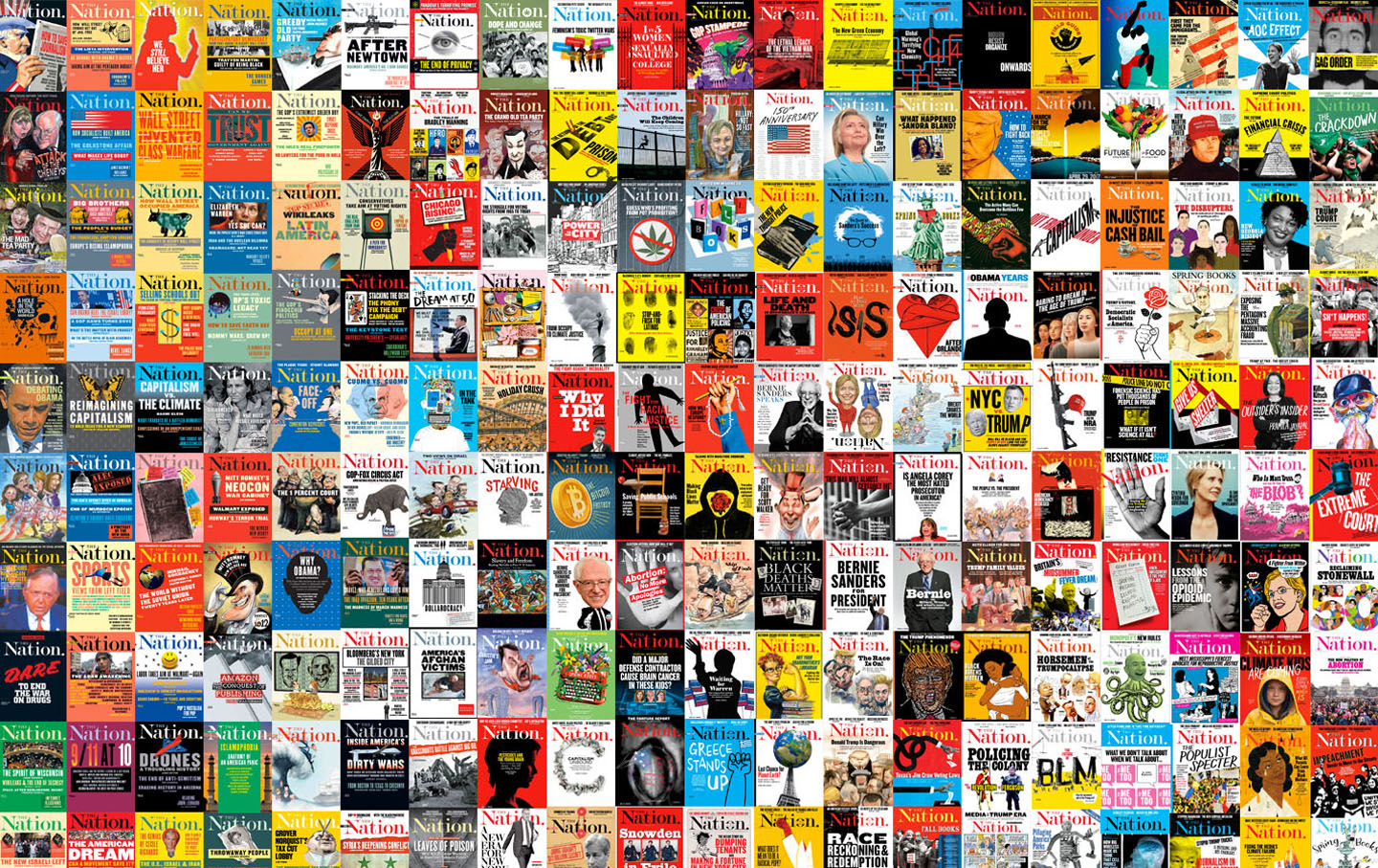 Over a decade ago, The Nation’s Katrina vanden Heuvel wrote, “It can be difficult, in these times, to maintain a sense of hope—as corruption, war, lies, and injustices large and small loom all around and outrage about the Right’s assault on our democracy threatens to overwhelm us…. But it’s during days like these that we need to remember that millions of us are organizing, agitating, mobilizing—and that there are many hard-fought victories to celebrate.”

For more than 155 years, The Nation has been spurring progress and uncovering abuse. And celebrating hard-fought victories. We stand apart from other publications by making news as well as reporting it. Our work has led to official inquiries and federal legislation, been cited by protesters and movement leaders across the globe, inspired grassroots organizing, and ignited debate within and outside our community of readers and supporters.

The Nation advocated for criminal justice reform long before it became a central tenet of the progressive movement. We obtained and published the only known undercover audio of the New York Police Department’s notorious stop-and-frisk tactic in action. Played nearly 4 million times, it sparked heated debate in the City Council and was cited in a landmark federal case that ruled stop-and-frisk unconstitutional and racially discriminatory. Two multipronged Nation investigations also sparked a historic rebuke of the prison-industrial complex. Our special report on how private equity reshaped public prisons for big profits launched a congressional hearing on the matter. A separate investigation, three years in the making, revealed people were needlessly dying inside the federal government’s private prisons—a problem rooted in its catastrophic decision to criminalize border crossings, which led the federal inmate population to rise so quickly, it demanded a fast, cheap solution: privatization. Our articles based on the investigation cornered the Department of Justice into announcing plans to eliminate federal private prisons and forced one to close.

Last year we cofounded Covering Climate Now, an unprecedented collaboration to strengthen reporting on climate change, which Nation environmental correspondent (and CCN executive director) Mark Hertsgaard called “the defining story of our time.” We believe the project has become the biggest effort ever undertaken to organize the world’s press around a single topic. More than 400 news outlets so far—with a combined audience approaching 2 billion people—have committed to running more and better-focused coverage of global warming and its consequences. (New Zealand Prime Minister Jacinda Ardern even gave CCN a shout-out in a speech at the 2019 United Nations Climate Action Summit.)

Nation journalists have testified before Congress on voting rights and sweeping voter disenfranchisement since before this administration obliquely and then openly threatened the sanctity of our electoral system. In 2020 alone, Nation reporting on the Postal Service’s failures to protect its employees and customers from exposure to the coronavirus inspired a Senate inquiry and demands for concrete action. Our work on the military’s use of gaming platforms to recruit teens elicited a public outcry, forcing the Army to pause its entire social media marketing and recruitment strategy and leading Representative Alexandria Ocasio-Cortez to introduce a measure to halt funding for the military’s use of online gaming platforms for recruitment.

And The Nation’s D.C. bureau has documented the machinations of the US national security state and under-the-radar policies by the Trump administration—including the steady militarization of American society. With explosive leaked documents, we revealed how this administration surreptitiously reclassified Immigration and Customs Enforcement and Customs and Border Protection as security agencies, enabling them to operate in even greater secrecy. Numerous internal memos also detailed CBP’s involvement in the peaceful protests triggered by the murder of George Floyd and uncovered a coordinated program of domestic counterinsurgency.

Our reporting was cited in a letter cosigned by 115 members of Congress, calling on the attorney general and Department of Homeland Security to account for the role of federal agents in domestic unrest. “This is not legitimate law enforcement under our Constitution but a shocking slide into authoritarianism and police state tactics,” wrote the Congress members. “These new tactics are an outrageous assault on the liberties of the people…. The deployment of roving units of secret police under the control of the President is an absolute affront to the Bill of Rights.”

Individually, these moments of triumph may seem just a drop in the bucket. But as the Rev. Martin Luther King Jr. reminded us, “The arc of the moral universe is long, but it bends towards justice.” We are happy and grateful to have you join us and the rest of the Nation community in the fight for a better tomorrow and a more radical, equitable future.