Get The Nation’s Weekly Newsletter

Fridays. The best of the week.

By signing up, you confirm that you are over the age of 16 and agree to receive occasional promotional offers for programs that support The Nation’s journalism. You can read our Privacy Policy here.

Thank you for signing up for The Nation’s weekly newsletter.

A monthly newsletter on the global fight for reproductive freedom.

By signing up, you confirm that you are over the age of 16 and agree to receive occasional promotional offers for programs that support The Nation’s journalism. You can read our Privacy Policy here.

Thank you for signing up. For more from The Nation, check out our latest issue.

The Nation is reader supported: Chip in $10 or more to help us continue to write about the issues that matter.

Did you know you can support The Nation by drinking wine?

Fifty years ago, in late 1972, I was one of a multitude of Chileans who lined the streets of Santiago to support President Salvador Allende as he embarked on a trip abroad to tell the world about how his homeland was advancing toward socialism using democratic means—an unprecedented revolutionary process that was under siege from forces both inside and outside the country. Arrayed against the left-wing government were powerful adversaries: the CIA, Nixon and his éminence noir Henry Kissinger, multinational corporations, international financial institutions, allied with a rabid conservative opposition within Chile itself that was increasingly armed and violent.

Efforts to overthrow the democratically elected president had thus far been unsuccessful. An insurrectionary month-long strike by truck drivers and entrepreneurs in October of 1972 had just been thwarted by the extraordinary mobilization of Chilean workers. But the writing was on the wall. This is not a mere metaphor: On many walls of the country, paramilitary fanatics had scrawled the words “Djakarta, ya viene”—“Jakarta is coming,” referring to the massacre in that city of hundreds of thousands of Indonesians after the coup against the left-wing government of Sukarno in 1967.

It was this prophecy of death and doom that Allende was trying to prevent. His 1972 trip was meant to explain to the international community what was at stake in Chile and to enlist the sympathy of the nations of the world. The cornerstone of that strategy was a rousing speech that he delivered 50 years ago this Sunday, on December 4, 1972, to the UN General Assembly.

Allende begins by emphasizing what differentiates the Chilean road to socialism from previous revolutions: major transformations are being carried out peacefully, strengthening civil liberties, respecting cultural and ideological pluralism, centered in the belief that economic democracy can be achieved through the full exercise of political freedom. But his efforts at recovering control over the country’s natural resources and riches have been met with unrelenting aggression from transnational corporations like ITT and Kennecott Copper, which were actively sabotaging the economy and seeking to create civil war in his country. Allende uses this situation of vulnerability to illustrate the tragedy of underdevelopment in Africa, Asia, and Latin America: “We are potentially rich countries; yet we live in poverty. We go from place to place seeking credit and help; yet—a true paradox in keeping with the capitalist economic system—we are major exporters of capital.”

The Challenge of Chile

Allende’s speech reads as a master class about the “tremendous injustices committed…under the guise of cooperation,” a brilliant analysis of the ravages created by the exploitation of the developing world. He calls for solidarity with Chile as it attempts to resolve the “dramatic deficiencies in housing, work, food and health,” but goes further, by stressing how all solutions to a series of global perils (wars, racism, nuclear weapons, “the truly vast and varied needs of more than two-thirds of mankind”), depend on the community of nations cooperating.

Allende’s words resonate heartbreakingly today. The world, of course, has changed, but many of the challenges remain the same (accelerated by the coming climate apocalypse, which was not on Allende’s radar—or anyone else’s—back in 1972). More heartbreaking still is that our president was to die 10 months later in Santiago, defending democracy and the Constitution—the first of so many other deaths during the 17-year dictatorship of Gen. Augusto Pinochet. It is a consolation that his message of hope and dignity still motivates the generations that followed him. 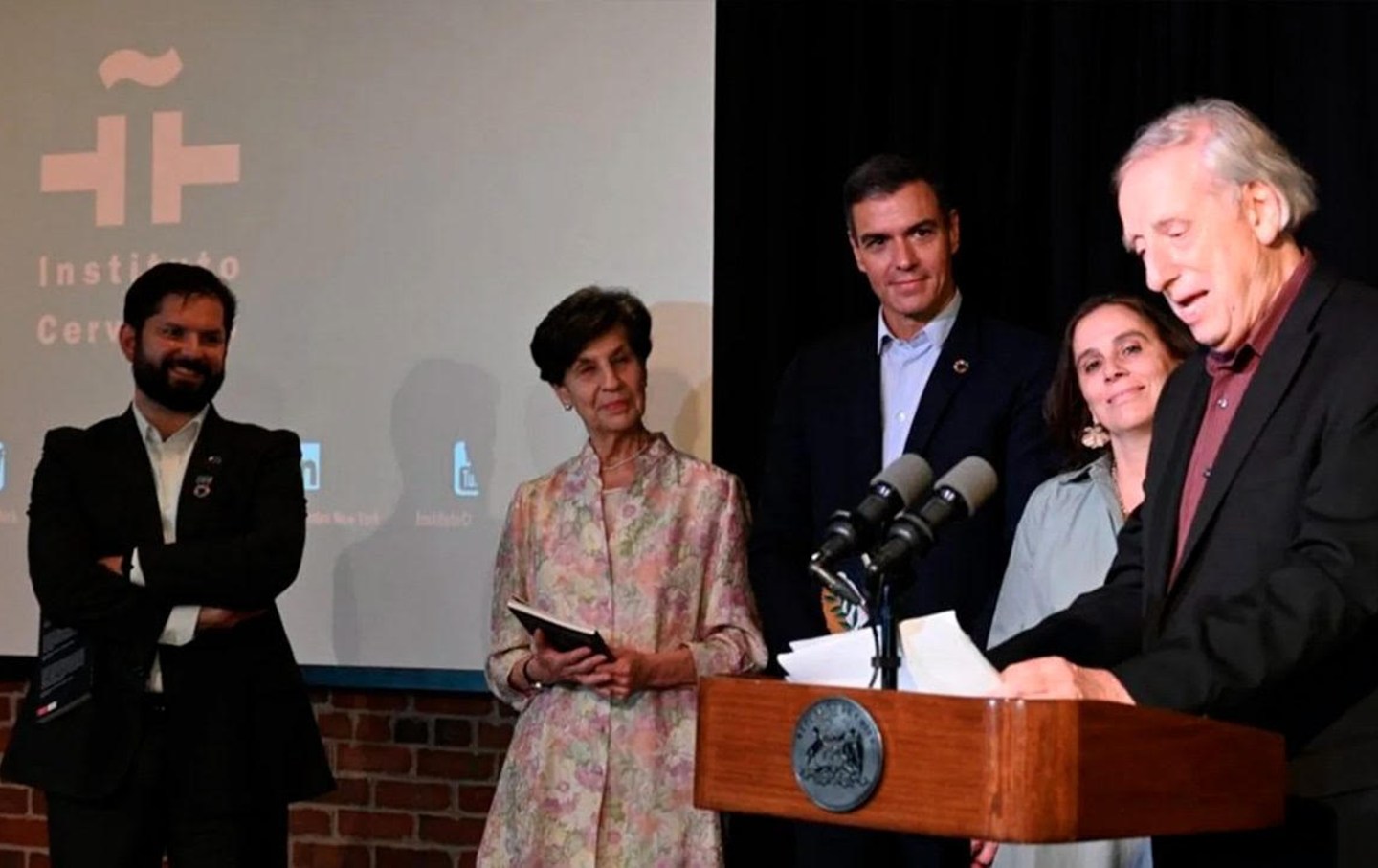 Indeed, two prominent members of those generations recently met in New York, along with Allende’s daughter, Isabel, to commemorate Allende’s speech. One of them, 36-year-old President Gabriel Boric, of Chile, was born more than 14 years after that speech was delivered and the other, 50-year-old Prime Minster Pedro Sánchez, of Spain, had not yet celebrated his first birthday in December of 1972. Both of these socialist leaders currently find themselves besieged by the virulent resurgence of right-wing movements that echo the very forces that demolished democracy in Chile and turned the country into a laboratory for the free-market neoliberalism that is now in crisis across the world. Boric and Sánchez saw Allende’s speech as a call to persevere in seeking justice, sovereignty, and equality for their own people, and a reaffirmation of their shared certainty that there can be no solution to humanity’s current predicaments without a different, egalitarian global order.

Trump Might Face Prison, but Bolton and Kissinger? Never!

I was privileged to have been invited to that encounter in Manhattan in order to introduce the speakers and comment on their words. As someone who, back in 1972, had said goodbye to Allende with so many of my fellow citizens, it was profoundly moving, 50 years later, to hear these two young heads of state recount how inspired they were by Allende’s courage, his sweeping view of history, his ethics of liberation and compassion, his brand of democratic socialism.

Though they had never met Allende, and I had breathed the same air as he had and worked with him during his last months in office, all three generations were joined, as so many men and women around the globe may be, by the words with which he finished his speech at the UN to a 10-minute standing ovation: “It is our faith in ourselves that increases our confidence in the great values of humanity and our confidence that those great values will prevail. They cannot be destroyed.”

Latest from the nation

Biden Just Showed Us How He’ll Run for Reelection

California's Extreme Weather Is the Future of Climate Change

VIDEO: People in Denmark Are a Lot Happier Than People in the United States. Here’s Why.

Historical Amnesia About Slavery Is a Tool of White Supremacy