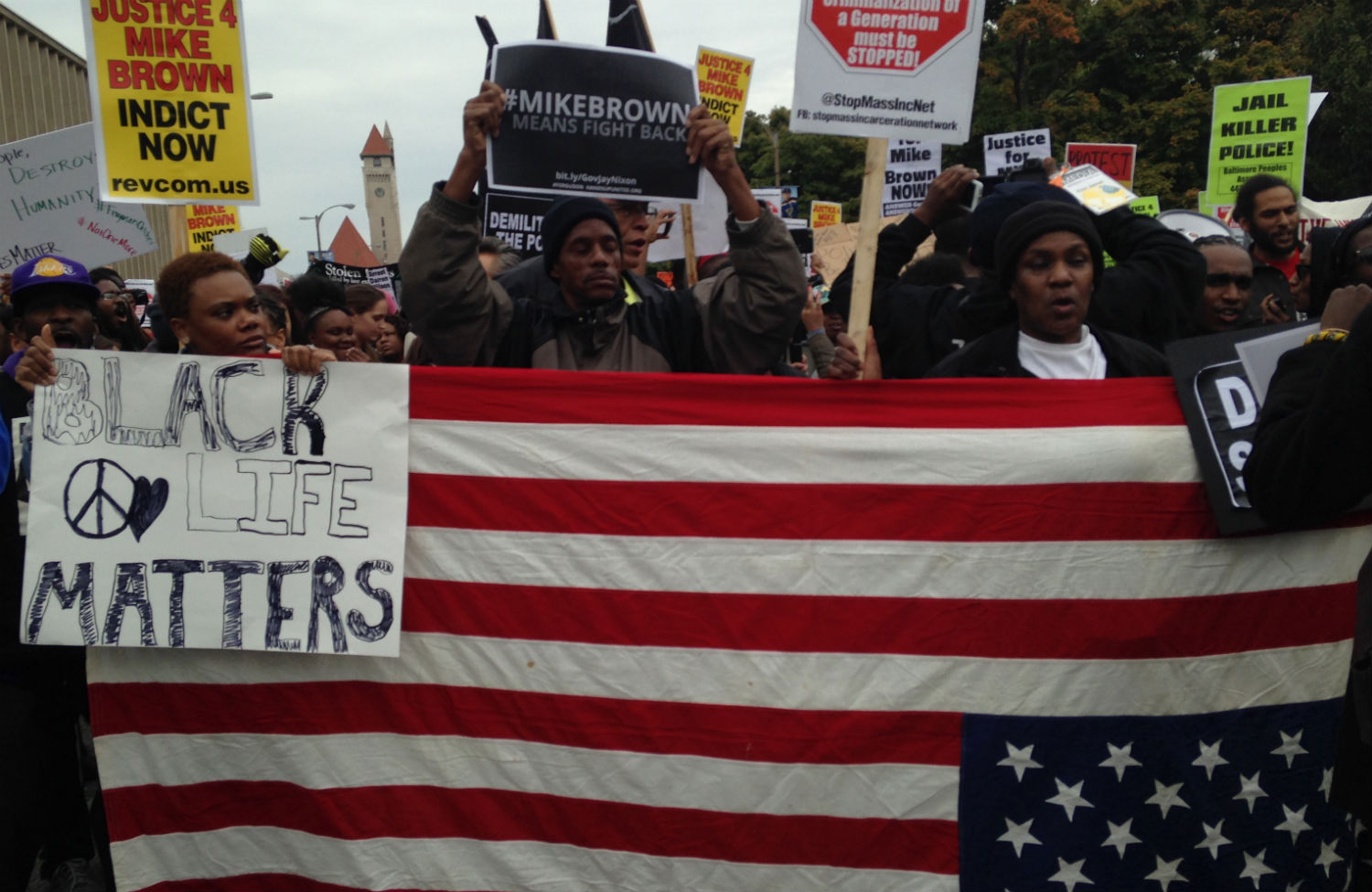 Protesters stand with an upside down American flag at the "Justice for All" national march in downtown St. Louis for Ferguson October.

“This moment is consecrated in blood,” a representative from the Organization for Black Struggle said before a crowd of 3,000 in downtown St. Louis last weekend. It was at a rally following the “Justice For All” national march—the centerpiece of “Ferguson October,” a four-day “weekend” of organized resistance and protest in the wake of the killing of unarmed teen Michael Brown by Officer Darren Wilson of the Ferguson, Missouri Police Department. In attendance was a diverse assembly of locals as well as people from across the country—people of all ages, races, and political orientations.

Reminding the crowd of the historical continuity present in the spectacle of black pain in America, the speaker went on: “If this moment is to become a movement…we have to make the cost of black life too high for them to take it.” Many speakers invoked legacies of organized struggle, as well as historical connections to slavery. The Dred Scott case, which upheld the legal status of slaves as chattel, was decided at the Old Courthouse just a stone’s throw from where the rally was being held.

One of the most striking aspects of the weekend was the way in which organizers drew connections between various social justice struggles—from the movement to end the occupation of Palestine to the #FightFor15 fast food workers campaign—and the fight for justice for Mike Brown. Representatives from these movements and others were invited to attend and speak about the relationships between these struggles and the fight against police brutality, the criminalization of black youth and white supremacy. The result was an impressive display of solidarity.

“When [Suhad Khatib] was talking about Palestine and the connections, and how as a Palestinian she needs to stand up to oppose the oppression of people of color in this country, so many people were cheering who I feel like would not have had awareness of the issue before. It’s been really great to see people being able to make these connections between different forms of oppression,” volunteer and St. Louis public school teacher Leah Patriarco explained to me.

After the rally, marchers carried a glass coffin to the St. Louis Police Department headquarters. Its cracked exterior reflected a distorted picture of the march. On the way, organizers stopped the march in the middle of the street to hold silence for four minutes and thirty seconds, symbolizing the amount of time Mike Brown’s body lay on the ground outside after he was gunned down.

It has been just over two months since Michael Brown’s death on August 9. In the weeks since, three other black men have been killed by police in St. Louis—including 18 year old Vonderrit Myers Jr. who was shot either holding a sandwich or a gun, depending on who you ask. Meanwhile, Darren Wilson remains on the Ferguson Police Department’s payroll and a Grand Jury has yet to hand down an indictment.

Under these circumstances, the racial tension in the St. Louis area becomes apparent straightaway—particularly if you happen to be black.

Recently, activists have made a point of occupying spaces traditionally sheltered from political protest, including sporting events. In these instances, the toxicity of the climate and the hostility of many whites in St. Louis became apparent. My friend, writer and organizer Nyle Fort, was called a nigger by an angry white sports fan outside of a Rams football game at Edward Jones stadium on Monday night. Moments later he had to physically intervene in an altercation in which a white man threatened to “fuck up” a black woman activist. Other fans yelled at protesters to “get over it” while chanting “I am Darren Wilson.”

The night before, at a Cardinals post-season baseball game, angry fans hurled racist insults at protesters while cheering for Darren Wilson. “White people are terrified in this town,” a white couple volunteering for the march told me plainly.

At one particularly low point, I was refused service at Ferguson Brewhouse, a restaurant down the street from the Ferguson police department. We were told there was no way we could place an order, as the kitchen was closed (food orders were taken and went out to several other people in the restaurant after we were denied).

It was there that I met Ashton, a U.S. army sergeant who invited us to join him at his table. I learned that the restaurant had become a flashpoint for open racial tensions. He told me that during the early stages of the resistance in Ferguson, he and a friend were denied service there. They left, and soon returned with more than fifty mostly black fellow protesters and occupied the restaurant until management conceded and served them. After that there was an unsteady peace. He and his friends, all of whom were black, seemed happy to take up space in the restaurant. They didn’t entertain any delusions about being wanted. Their presence was strategic. In Ferguson, for those in the process of resisting oppression, occupying the frontlines in hostile spaces becomes a necessity.

On Saturday evening, a candlelight vigil was held at the spot in Canfield Green where Mike Brown was gunned down. The crowd paid their respects, and eventually began to march to the Ferguson police department, led by Brown’s mother. Someone in the crowd had rigged a mobile speaker system which played Tupac’s “Changes” as the procession rounded a corner and the precinct came into view.

Earlier, at the rally in the park downtown, organizer Tef Poe told the crowd that “this ain’t your grandparents civil rights movement.” In that spirit, the mood that night was one of raucous resistance and joyous protest. A dance party was held in the street. I met an 18 year old organizer with Lost Voices named Josh, whose wrists were still scarred from being tightly-handcuffed while under arrest in Ferguson during the early days of protests. He told me that he bears the burden of police brutality in his town, and if he has to live with that burden and organize to resist it rather than live his young life unhindered, he may as well have fun with it.

Sunday’s evening breakaway protest was similarly exultant. Thousands of people marched through the foggy streets to converge on St. Louis University’s campus. Protesters shut down an intersection, jumping rope in the middle of the street while chanting at the police: “They think it’s a game, they think it’s a joke!” The tactics deployed by activists during the action were playful yet powerful commentary on the value of black life in the eyes of the police. The crowd was made up mostly of youth, including a massive contingent of SLU students

After a tense twenty-minute standoff with the SLPD, officers stepped aside to let protesters pass. Cornel West appeared in solidarity with the young people leading the march as the procession advanced towards the SLU campus. At the front of the march was Vonderitt Myers Sr., father to the recently slain Shaw teenager. Upon arriving at the university, the group was met by campus security, which initially attempted to bar them from entering but quickly opened the gates. Once on campus, the protesters shouted, “Out of the dorms and into the streets!” as they filled the central quad. Students poured out of nearby buildings to show support and bring them supplies. The hashtag #OccupySLU began to trend on Twitter as activists declared a sit in. Activists occupying the campus began to play a game of nighttime soccer. Like the action at the Ferguson police department on Saturday night where youth were dancing in the streets, the mood was one of jubilant resistance. Again, it was mostly youth on the frontlines.

Observers have said that it may be the largest convergence or action related to the police killings that St. Louis has seen yet.

What is clear from my time on the ground in St. Louis is that young people are the fire propelling this movement—an organized, nonviolent struggle to end police brutality and the white supremacist structures that perpetuate it. These are not riots, this is a resistance—and it’s growing. Black youth, and young Black women in particular, are at the frontlines.

For me as a young black journalist, the racism I encountered was deeply jarring. But the resistance gives me hope. Lately that resistance has meant fighting back against brutality seemingly without bounds; while scores of protesters have been arrested, Darren Wilson remains at large. Despite an incredibly hostile climate on the ground, young activists are braving the worst to make it clear that we don’t have any option but to make change. Youth understand that at the end of the day, they don’t have a choice – it’s their lives on the line so they must either resist or die. One of the chants from the weekend captures this sentiment perfectly: “We ready, we ready, we ready, for you.”

Take Action: In the Wake of Ferguson, Demand Concrete Change