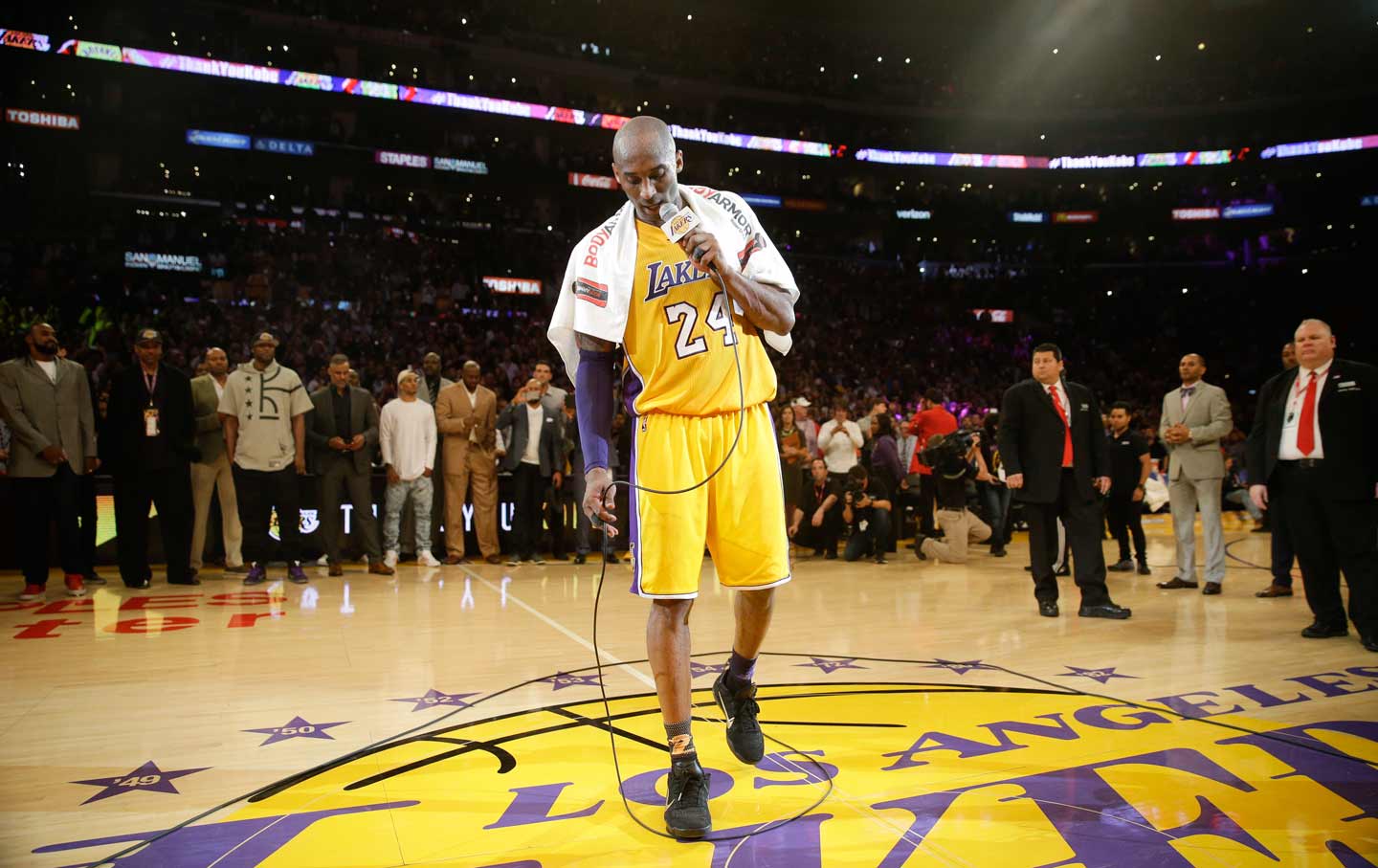 Kobe Bryant ended his Hall of Fame NBA career in legendary fashion with 60 points on an astounding 50 shots last Wednesday in front of a star-studded hometown crowd. It was just the 17th victory of the season for the Los Angeles Lakers, but that didn’t stop Hollywood and the sports world from coming together to burnish a basketball icon.

As is always the way in these Internet days, all of this hegemonic hagiography was accompanied by counter-takes at the margins. Examinations of Kobe’s high-volume shooting style or critiques of the way he drove away teammates like Shaquille O’Neal and Dwight Howard were there for those who wanted to find them.

The piece that grabbed a hold of me however—and I just can’t get it out of my head—was “The Legacy of the Kobe Bryant Rape Case,” by Lindsay Gibbs. It looked at the rape charges levied against Bryant in Eagle County, Colorado, back in 2003, and the ramifications of his lawyers’ scorched-earth approach toward rape survivors. This criminal case never went to trial, of course, after Bryant’s alleged victim refused to cooperate, and any civil case that could have arisen was settled out of court. It’s a common story when the wealthy and powerful are accused of sexual assault.

But then there was Kobe Bryant’s apology. I had not read his statement in 13 years, and it’s a stunning artifact. After years of reporting on Steubenville, the Notre Dame/Lizzy Seeberg case, Ben Roethlisberger, Patrick Kane, and so many more of these all-too-frequent stories where sports meets sexual assault, it left me wide-eyed, with more questions than answers.

Before reading, please keep in mind that the apology was made after the case was dismissed, and there is no evidence that Bryant was compelled to make this as part of the civil settlement of the case.

First, I want to apologize directly to the young woman involved in this incident. I want to apologize to her for my behavior that night and for the consequences she has suffered in the past year. Although this year has been incredibly difficult for me personally, I can only imagine the pain she has had to endure. I also want to apologize to her parents and family members, and to my family and friends and supporters, and to the citizens of Eagle, Colorado. I also want to make it clear that I do not question the motives of this young woman. No money has been paid to this woman. She has agreed that this statement will not be used against me in the civil case. Although I truly believe this encounter between us was consensual, I recognize now that she did not and does not view this incident the same way I did. After months of reviewing discovery, listening to her attorney, and even her testimony in person, I now understand how she feels that she did not consent to this encounter. I issue this statement today fully aware that while one part of this case ends today, another remains. I understand that the civil case against me will go forward. That part of this case will be decided by and between the parties directly involved in the incident and will no longer be a financial or emotional drain on the citizens of the state of Colorado.

Viewed through a 2016 lens, such an apology is breathtaking. It is impossible to even imagine a Ben Roethlisberger or a Jameis Winston or any high-profile athlete accused of rape issuing a similar statement. The handbook today says to deny everything until your high-priced lawyers and Internet armies bury your alleged victim. Then, treat the entire incident like just another obstacle to overcome on the road to greatness. Yet in 2003 Bryant essentially admitted that, while he does not believe a rape occurred… a rape may in fact have occurred.

We will never know if Bryant released this statement out of guilt, some sort of attempt at image rehabilitation, or a genuine sense of trying to achieve some kind of atonement. But whatever his motivation, does such an apology for what “may” have happened have value to people trying to combat sexual assault?

I spoke with Neil Irvin, director of the organization Men Can Stop Rape, about Bryant’s apology. He said,

Kobe is the only accused individual who I’ve ever seen provide an apology in writing in my 16 years of doing rape prevention work. I read it and it fits with what I know about rape: survivors don’t lie. I know we’ve been taught to believe they do but that’s a story which only serves to empower rapists. Kobe’s apology actually serves to push against the idea that survivors lie. He’s saying the opposite. The question I’m left with, is how do you honor Kobe’s statement and what appears to be his subsequent growth, without ignoring there was a survivor who also has to overcome the violence that Kobe admits to. I also know that for me—an African American man—there is something about the fact that Kobe was facing a life sentence and knowing the way rape charges have historically been used against black men…that is hard to shut out. But that also makes his desire to make amends, to apologize, matter even more to me. It helps our work at Men Can Stop Rape even if we don’t know whether Kobe’s apology was for his corporate image or the survivor… or both.

I also spoke with Jessica Luther, author of the forthcoming book, Unsportsmanlike Conduct: College Football and the politics of Rape. Like me, Luther had not considered Kobe’s apology in 13 years. “Alone, it’s good,” she said.

In a culture that fails to teach consent, it’s possible that there are plenty of cases where the two people involved could come away with different readings. For Bryant to say this, well, it’s as close to an admission of guilt as you can get without admitting guilt. In context, it’s harder for me because of how his defense team (and the system at large) trashed her and made her feel unsafe. This seems like the absolute least that should have happened in response to that: saying she sincerely believes she did not consent that night. Despite Bryant’s statement, there are still plenty of people who think this woman lied in order to get famous/wealthy/whatever. But we should remember always that the lasting impact of this case is not what Bryant said afterward: it’s how the case contributed to our ideas about people who report sexual violence.

That last point, about “how the case contributed to our ideas about people who report sexual violence,” is why the forgotten apology is so important. All week on social media, I was deluged with people telling me that Bryant’s alleged victim was a liar, a whore, or a con artist. These threat-mongers justified their ugliness by saying “Kobe didn’t do anything.” But even Kobe admitted that he did do something. That’s why it matters.

Ignoring Kobe’s apology also means we can’t reckon with who he is: someone who apologized for committing an act of violence against a woman and 13 years later was fêted by liberal Los Angeles as a hero. That sends its own kind of message. The message the sports media and Lakers faithful sent was that Kobe’s cinematic journey matters more than anyone who may have been damaged along the way. Even in liberal Hollywood, rape survivors are, at most, supporting characters, and often left on the cutting room floor.