The Grande Pettine Hotel in Odesa, destroyed by a rocket on May 8. (Leif Reigstad)

desa, kraine—On a hot and sunny summer day along the Black Sea beachfront, Igor cast his fishing line over the edge of a long pier. Wearing nothing but a blue Speedo and the faded red beach towel wrapped around his neck, the leathery-skinned Odessan was at a different spot from his preferred place for finding Gobi fish and mussels, where he’d been fishing for 10 years. His usual place had been wrecked by a recent rocket attack.1

An engineer by trade, Igor was out of work because of the war, and he’d been coming here to fish all day to keep busy. He didn’t seem to care that Russian ships were just out of sight somewhere off the coast, training their armaments on this picturesque and historic city. The evidence of their destructive might was visible just a short walk down the shoreline, where the charred remains of a ritzy waterfront hotel sat in a massive pile of rubble a week after being struck by a Russian missile. As Igor fished, the soft booms of defensive artillery sounded in the background. “I don’t even consider going to a shelter,” he told me. “If it hits, it hits.”2

Odesa had been considered an early target of Russian President Vladimir Putin, whose efforts on the southern front were stalled at Mariupol and, so far, have been largely stopped at Mykolaiv, preventing ground forces from reaching this crown jewel on the Black Sea. Odesa has since become a symbol of Ukraine’s stubborn resistance. It was roughly 75 miles along the coast from here that Russia’s warship Moskva was famously sunk, and while a curfew remains in effect and city officials still warn that Russian attempts at a marine landing remain possible, it seems extremely improbable that the war will reach Odesa anytime soon in the way that it’s reached the Donbas region or the villages surrounding Kyiv.3

Still, rockets continue to strike, and every so often mines wash in with the tide. A few days after I met Igor, a beach bathroom was destroyed by rocket. But none of this seemed to bother beachgoers bathing on the white sands. Their easy-going enjoyment of the waterfront seemed emblematic of the Odessan spirit.4

On the Night Bus to Kyiv

As in most of the cities that sit far from the front lines, life here has continued amid the war. At the city’s Privoz Market, a maze of shops selling everything from seafood to showerheads, shoppers bought cheese and fresh bread from Georgians, dried fruit and nuts from Uzbeks, and fresh fruit and wine from Moldovans, including bushels of the brightest-red strawberries I’ve ever seen. One woman selling hunks of salty cheese told me the market never closed, not even on February 24, when the recent invasion began.5

While the market remained open, it wasn’t quite as busy as usual, according to my fixer, Olga Pariieva. The streets of Odesa were similarly busy, yet missing the hordes of tourists and cars typical for this time of year. It felt peaceful, particularly given the surrounding context of a country at war. Locals were out enjoying the green parks and cobblestone streets, lined by ornate buildings from the 18th and 19th centuries, crumbling masterpieces in shades of pastel pink and sea-green. At the Odesa City Garden, the proverbial heart of the city, a street violinist played Leonard Cohen’s “Hallelujah” over the distant sounds of air raid sirens. “Odesa never gives up,” Pariieva told me. “You cannot do this to Odesa.”6

But much of the historic downtown is blocked by checkpoints, and some landmarks, like the National Opera, are completely shut off from the public. And while Odesa traditionally moves at a more relaxed pace than the typical big city, civilians here have been mobilizing to support the war effort in parts of Ukraine that have been more directly impacted.7

In a four-star hotel in the city’s equivalent of Miami’s South Beach—a cluster of glass skyscrapers and night clubs—volunteers were unpacking and sorting packages of combat medical kits, thermal tactical optics, and camo uniforms. The hotel’s restaurant was converted into a donation center at the beginning of the war, and since then volunteers have been sorting donations and cooking meals for soldiers in the kitchen. Piles of potatoes and onions lay atop red velvet couches where once wealthy socialites sat popping bottles of champagne.8

In an atrium beneath a gold chandelier, lead organizer Victoria Krotova showed me a photo on her phone of a brand-new silver pickup truck that they’d arranged to be delivered to the front. Swiping to the next image on her phone, she showed me the same truck, several days after it reached the front, turned into a useless piece of scrap by Russian artillery.9

“The day the war began, I woke up and immediately understood that part of my life before the war was finished,” she said, wearing a white sweatshirt that read “There’s always hope,” and standing near a table on which sat a package of Pampers next to a pair of thermal vision goggles. “People will never be the same. It will never be the same as it used to be.”10 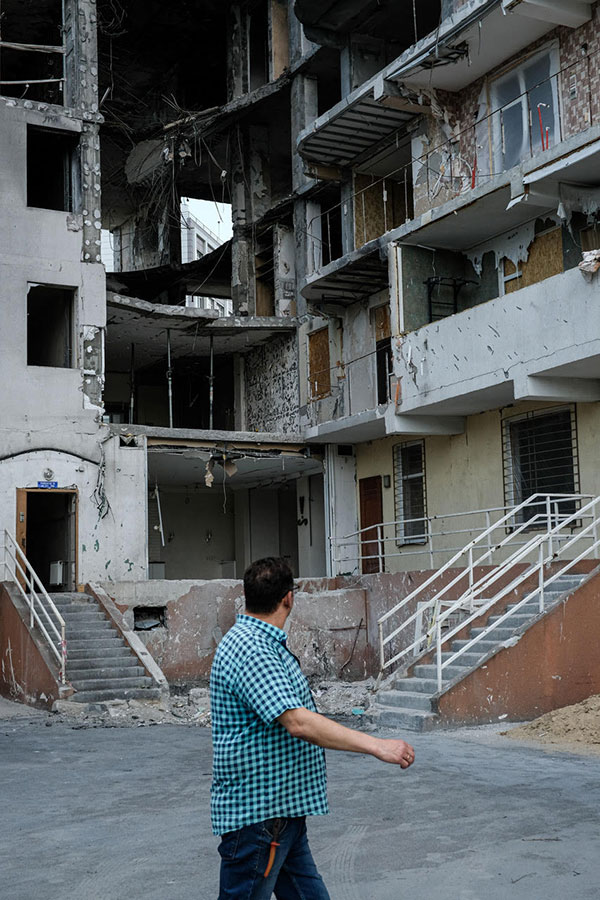 The apartment complex in Odesa where a 3-month-old was killed on Easter weekend. (Leif Reigstad)

Despite the hotel’s plush setting, the horrors of war were close. Another volunteer knew a woman who was killed, along with her mother and her 3-month-old baby, when a rocket struck an apartment complex on Easter weekend. When I visited the site in late May, there was still a gaping hole in the building, and a red toy airplane and two roses lay on a stairwell nearby. According to the City of Odesa’s Telegram channel, 30 apartments there were completely destroyed, and 62 more were damaged.12

Abulfat Aliev, the owner of a Turkish imports business on the apartment complex’s ground floor, was on his way to work when the rocket struck. He got a security alert saying that his front door had been forced open, and arrived to see the smoldering remains of apartments and a line of charred cars piled on the street in front. “There were flames and smoke, everything was on fire,” he said. “It was horrible. People died, people lost their homes, their memories, things that can’t be replaced.”13

At another apartment complex in Odesa, near a large mall that was struck by a rocket, broken windows peered out over an empty playground in the courtyard. Few people remained here. One resident, Lena Sukhotskaya, told me her daughter and grandson were playing here one day when they saw rockets whizzing overhead. They left shortly after that. When a rocket struck the mall nearby, another resident, Natalia, told me she was inside the hallway, clutching her elderly mother so tightly that she nearly suffocated her; they tried to run down to the basement, but the electricity went out and it was too dark; people were falling down. She told me that one small child was screaming so loudly that they thought he’d been hurt; but he was just terrified, and refused to let anyone touch him to look for injuries.14

During my week in Odesa, several more rockets struck: a fertilizer plant was destroyed in one attack, and a 4-year-old girl lost her leg when a residential area was hit in Zatoka, a resort town just south of the city.15

Amid the constant threat from above, some places in the city can feel like a ghost town. At an amusement park near the waterfront, attendants sat bored next to their rides. There was a tangled mass of stationary bumper cars, and carnival music echoed eerily throughout the nearly empty grounds. A double-decker carousel twirled around a few times for their painted horses’ only riders: a 2-year-boy and his mother, Katya.16

“We come here for the distraction,” Katya told me. “I still haven’t gotten used to the rockets. I’m afraid it might come for us next time, hit our house.” She said she hasn’t left Odesa because her mother lives here, and she won’t leave her behind. Then she began to cry. In English, she said, “Stop the war. Stop killing children.”17