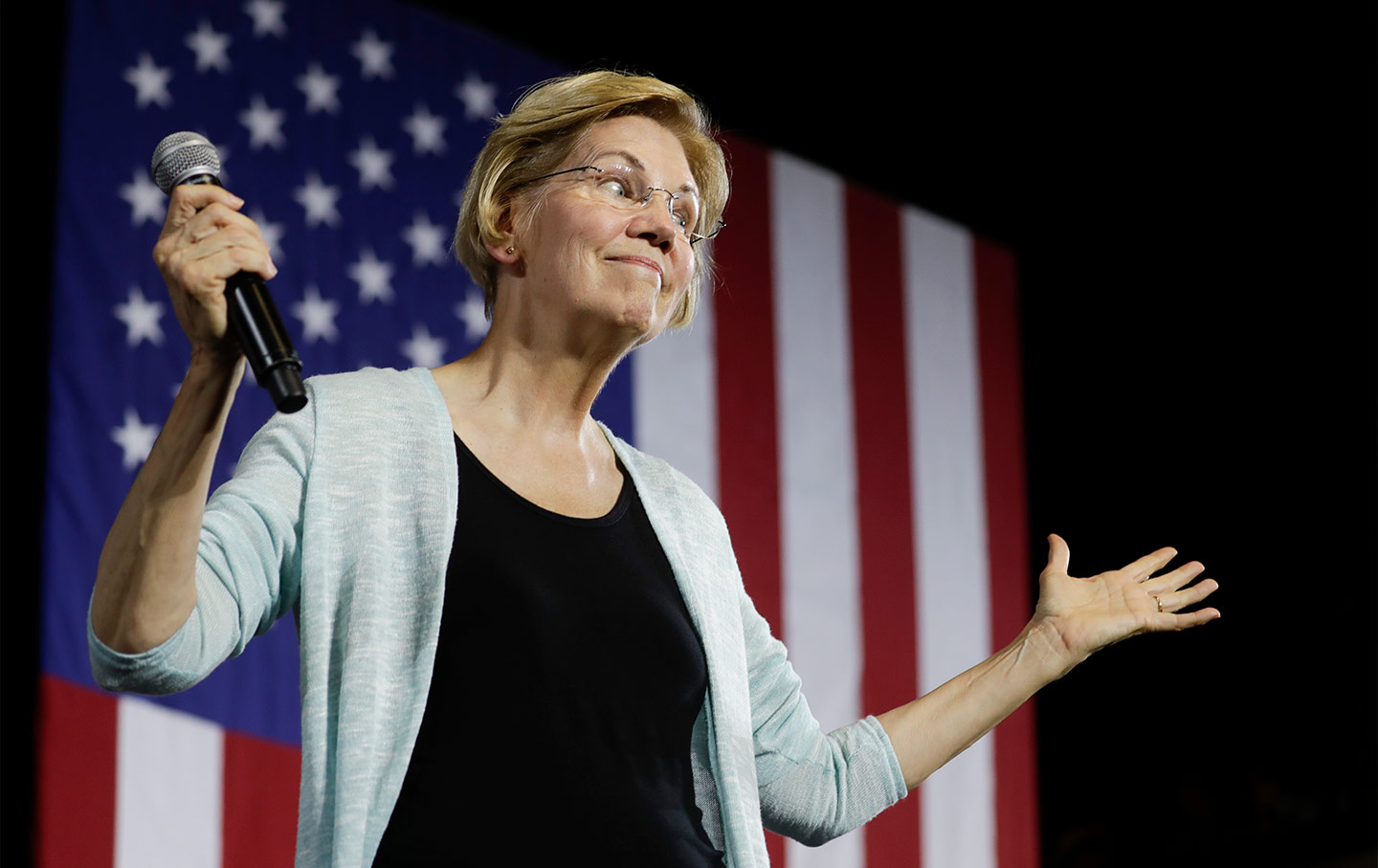 Democratic presidential candidate Elizabeth Warren was one of the first politicians to call for Trump’s impeachment. (AP / Chris Carlson)

Elizabeth Warren called for the impeachment of Donald Trump in April, when most other prominent Democrats were dithering over the issue. She read Robert Mueller’s report and declared, “Mueller put the next step in the hands of Congress: ‘Congress has authority to prohibit a President’s corrupt use of his authority in order to protect the integrity of the administration of justice.’ The correct process for exercising that authority is impeachment.”

Eventually, the men who were also top contenders for the Democratic presidential nomination caught up. But the senator from Massachusetts, who seeks not merely to replace Trump but to be the first woman to serve as president of the United States, has not let up on the issue of accountability.

Now that impeachment is on the agenda, Warren brings it up in speeches, at town hall meetings, and during interviews with reporters. On the day this month when she filed her paperwork for the New Hampshire primary, she was asked if she worried about a Senate trial of Trump intersecting with the primary campaign. “I have constitutional responsibilities,” Warren replied. “I took an oath of office, as did everyone in Congress and part of that oath of office is the basic principle that no one is above the law. That includes the president of the United States. And if the House goes forward and sends an impeachment over to the Senate, then I will be there for the trial.…

“I believe it is appropriate for this impeachment inquiry to go forward. I think it should have happened earlier, but we’re here now. Let’s do it!”

Polling suggests that Warren’s “Let’s do it!” sensibility mirrors the attitude of American women, who are far more enthusiastic about holding this president to account than men are. A CNN survey released Tuesday found that 61 percent of women support Trump’s impeachment and removal. Just 40 percent of men support impeachment and removal, while a clear majority—53 percent—is opposed.

That’s a 21-point gender gap when it comes to support for congressional action against Trump. It translates into a top-line divide in favor of impeachment and removal, with 50 percent of everyone surveyed by CNN backing full-on accountability, while 43 percent are opposed. The CNN numbers are relatively consistent with other surveys. For instance, an October Quinnipiac University Poll found that 58 percent of women approved of the House’s impeachment inquiry, while just 39 percent of men backed it—adding up to an overall 55 percent approval figure, versus 43 percent disapproval.

Since Trump assumed the presidency, polls have shown that women—especially women of color—have played an outsize role in the overall opposition to Trump. But, now, almost three years into Trump’s presidency, pollster Celinda Lake speaks of a “record gender gap,” with surveys showing that women are “far, far more critical of Donald Trump than men.” And when it comes to impeachment, that gender gap is growing. Rapidly.

The new poll for CNN “marks the first time that more than 60 percent of women have said they backed impeaching Trump and removing him from office,” notes the network. In May, that number was 51 percent, and in October, 56 percent took that position. Now, more than three-fifths of women are saying Congress should end Trump’s presidency.

Now that impeachment has become a real prospect, with House Speaker’s Nancy Pelosi’s launch of a formal inquiry, congressional hearings, and increasingly intense media attention to the issue, Representative Maxine Waters, the California Democrat who was an early and often lonely advocate for holding the president to account, says:

In many ways I feel a bit vindicated. There were some people who didn’t understand why I was taking the position and why I was so strong on it. I feel that there’s maybe better understanding now.

That understanding is particularly strong among women of color. According to a Washington Post/Schar School poll reported in the Post last month:

If Trump is impeached, as now seems likely, it will be in no small part because of the gender gap that has emerged. If it keeps widening, the pressure on Republicans in the Senate to vote for the president’s removal will increase. And if senators fail to remove the president, well, Warren might just have a plan for how to remove him next November.

In Iowa, this week, she raised the prospect of selecting a woman as her running mate if she secures the 2020 Democratic presidential nomination. Asked by a likely caucus goer if she would consider a woman for vice president, Warren said, “It would be entirely presumptuous of me to talk about running mates.”

“But,” she added, “I gotta say, why wouldn’t I have a woman for a running mate?”

Warren’s not the only one who is thinking that two women might be just the ticket for mobilizing the overwhelming majority of women who not only support impeachment but, in poll after poll, say they disapprove of Trump’s presidency. Asked earlier this year if she would consider picking a woman as her vice presidential running mate, California Senator Kamala Harris replied, “Yes, I would.” Indeed, Harris said, it would be “fabulous.”