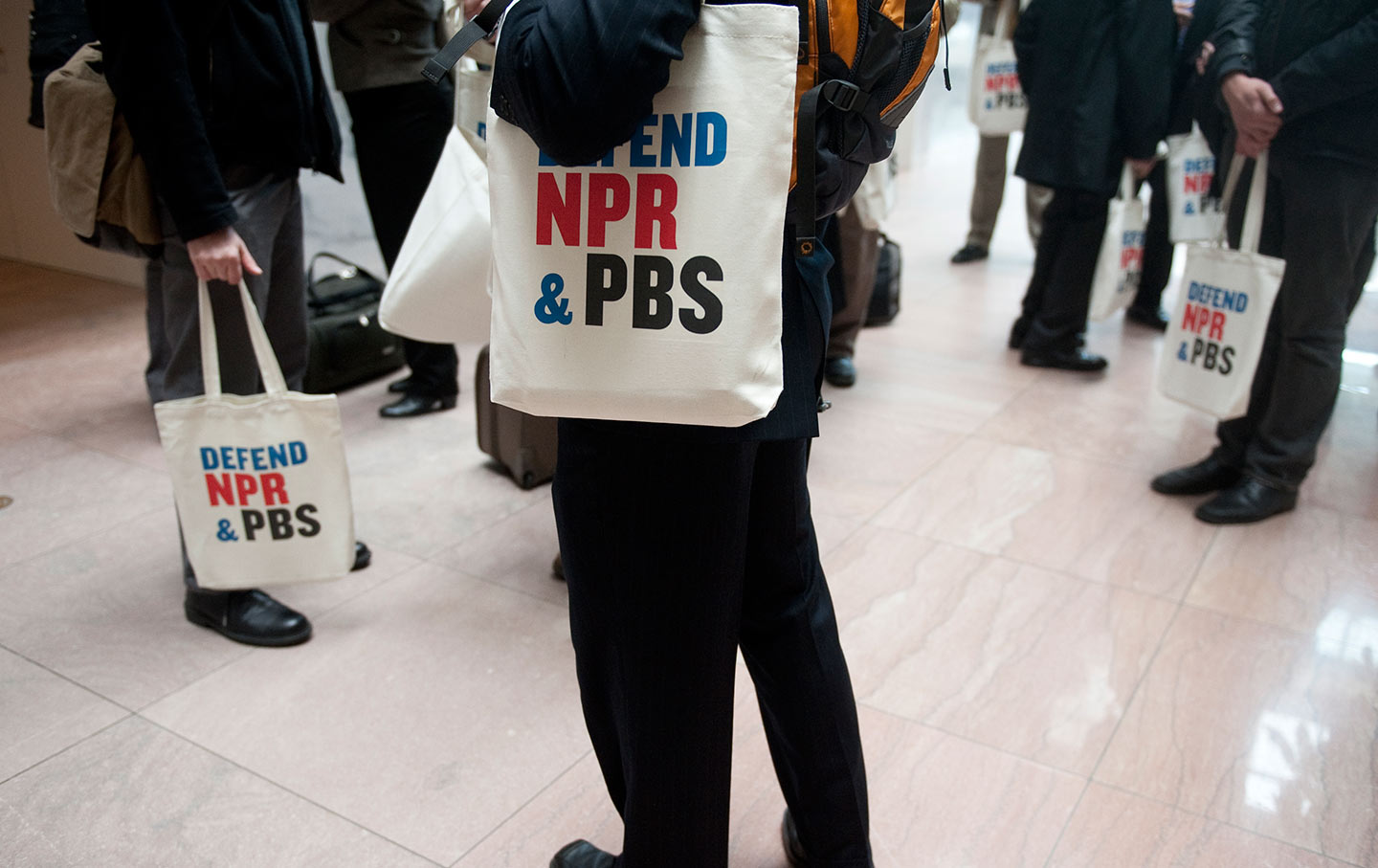 A group of public-broadcasting supporters gather to lobby lawmakers to keep funding the PBS and NPR. (AP Photo / Bill Clark)

The last thing Americans need, in this era of “fake news” hegemony, is less real news.

But that’s what the president proposes.

Donald Trump’s generally onerous budget proposal is very specifically onerous when it comes to the question of whether all Americans will have acceoss to quality news and entertainment programming. Under the Trump proposal, federal funding for public media doesn’t just take a cut—it is phased out altogether.

Conservative Republicans have been angling for years to zero out funding for the Corporation for Public Broadcasting, which provides federal support for local PBS and National Public Radio stations. Prodded years ago by conservative columnist George Will, who asked, “What about the cultural institutions? Conservatives have considerable grievances against the Corporation for Public Broadcasting, the national endowments for the arts and the humanities. What’s their future?” To which House Speaker Newt Gingrich replied: “I personally would privatize them all.”

“There is no viable substitute for federal funding that ensures Americans have universal access to public media’s educational and informational programming and services.”

Gingrich failed, but the agitation never stopped. As US Senator Ed Markey, D-Massachusetts, has said: “PBS is right at the top of their hit list—always has been and always will be, until they can destroy it.”

Now, as he has with so many other items on the right-wing wish list, Trump is delivering for those who desperately want to eliminate alternatives to the unadulterated spin and wrongheaded partisanship that dominates talk radio and too much of broadcast and cable TV.

In much of America, public media provide that alternative. And people trust it.

While PBS and NPR certainly have their flaws, they are exceptionally well regarded when compared with other media. New polling confirms that Americans continue to have more faith in PBS and its member stations than in digital platforms, commercial cable and broadcast television, newspapers, and social media.

At the root of that faith is a sense that public media serve the great mass of Americans rather than advertisers and political agendas. If Trump’s scheme were to succeed, says CPB president Patricia Harrison, the phasing out of funding “would at first devastate, and then ultimately destroy public media’s ability to provide early childhood content, life-saving emergency alerts, and local journalism.”

That’s especially true for rural America, where public and community radio stations are often lonely islands of intellectual honesty and journalistic responsibility in seas of ideological fanaticism and digital fakery. CPB funding helps public and community stations in major markets to do more, but in rural areas CPB funding is often the difference between survival and radio silence.

Trump’s budget proposal claims that “CPB grants represent a small share of the total funding for the Public Broadcasting Service (PBS) and National Public Radio (NPR), which primarily rely on private donations to fund their operations.”

But that a deliberate mischaracterization of the reality of how public radio and television stations stay on the air.

While public-media funding accounts for roughly 0.1 percent of the federal budget, the group Protect My Public Media points out that

The bottom line, says Harrison, is this:

“There is no viable substitute for federal funding that ensures Americans have universal access to public media’s educational and informational programming and services.”

Our nation’s non-commercial public media is made possible by a uniquely American, entrepreneurial, public-private partnership. Federal funding is the foundation of that partnership and a recognition of the proven benefits delivered to the American people through public media. The partnership continues with local stations doing their part, working with their communities to complete the funding process.

That’s not a complicated equation, and Republicans who represent rural areas have often aligned with Democrats to preserve CPB funding. They’ll have to do so again. But even if they succeed, funding for public media in the United States will still be insufficient.

By comparison with most countries that consider themselves well-developed democracies—and thus recognize the vital role public media play in informing voters about elections and governance—the United States invariably falls short.

Instead of eliminating public-media funding, the United States should be increasing support for independent, not-for-profit programming on public and community stations. It’s the necessary alternative to fake news. It’s also the necessary response to a declining for-profit media system that has been so weakened by commercial demands that it leaves a space for fake news.

Several years ago, Vermont Senator Bernie Sanders explained the crisis in the context of a previous proposal for gutting PBS and NPR funding. His words ring even truer now:

NPR and PBS… provide some of the highest quality and most objective news reporting in the world. Over the last several decades, as the major broadcasting firms were purchased by corporate conglomerates, support for effective, independent newsrooms has waned. The broadcast news industry, both television and radio, now is vastly transformed. Driven by profits and a 24-hour news cycle, much of the ‘news’ has been dumbed-down and sensationalized and does not reflect the needs of a democracy in which citizens have a right to hear balanced and thoughtful discussion about the most pressing issues facing our nation and the world. The news programming offered by NPR and PBS is the great exception to this trend, and preserving funding for these essential services is necessary to maintaining an honest, lively national debate.”