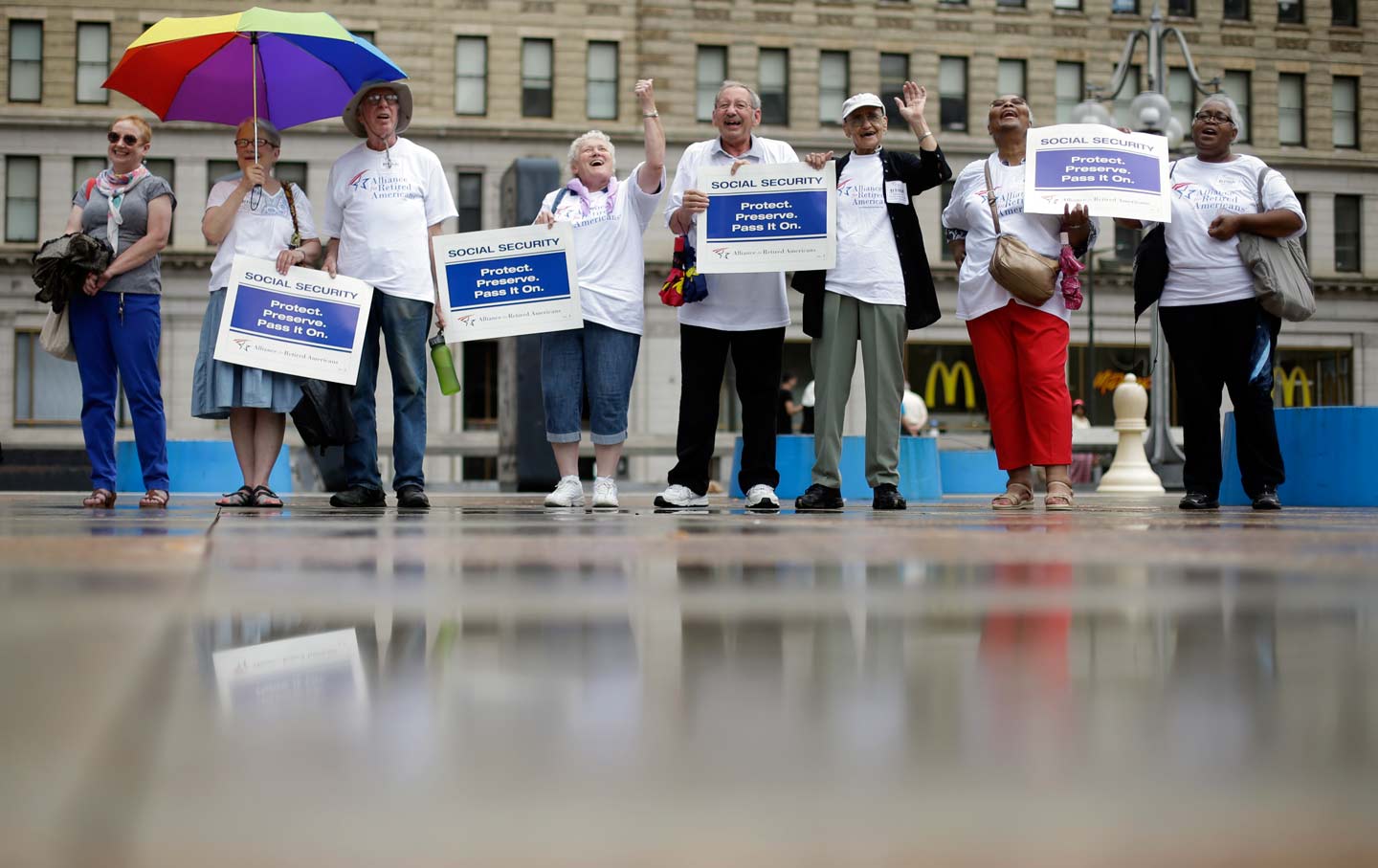 Any conversation about tackling poverty in the United States should include protecting and expanding Social Security. The reason is pretty straightforward: Social Security is the most powerful tool available to lift people out of poverty. Nearly two-thirds of seniors depend on Social Security for the majority of their income, and millions more children and adults depend upon survivors and disability benefits. According to Center for Budget and Policy Priorities analysis of Census data, Social Security kept 21 million Americans out of poverty in the last year alone. All told, that’s more people than any other government program.

Social Security isn’t a luxury—it’s a lifeline. Social Security works. No one runs out of benefits, and payments don’t rise and fall with the stock market. Despite scare tactics from Republicans in Congress, the facts are clear. Social Security has a $2.8 trillion surplus. If we do nothing, Social Security will be safe for the next 18 years, and after that will continue to pay three-quarters of benefits through the end of the century.

Of course, we don’t have to sit by and do nothing. Since its beginning, Social Security has been adjusted from time to time, and that is what we need to do now. With some modest adjustments, it is possible to keep the system solvent for decades more, even while increasing benefits.

For the millions of Americans who rely on Social Security, the situation got worse this year. For just the third time since 1975, seniors who receive Social Security—along with many who receive veterans’ benefits, Social Security disability benefits, and other monthly payments—aren’t receiving any annual increase from their cost of living adjustment (COLA). CEOs at the top 350 American companies received, on average, a 3.9 percent pay increase last year. But seniors and veterans? Not a dime more.

That’s why a group of us in Congress have introduced the Seniors and Veterans Emergency Benefits Act (SAVE Benefits Act). This bill would give a onetime payment of $581 to those people who aren’t receiving a COLA this year—a raise equal to the 3.9 percent pay increase the top CEOs received.

Social Security payments average only about $1,340 a month—and millions of seniors who rely on those checks are barely scraping by. A $581 increase could cover almost three months of groceries for seniors or a year’s worth of out-of-pocket costs on critical prescription drugs for the average Medicare beneficiary. That $50 a month is worth a heck of a lot to the 70 million Americans who would have just a little more in their pockets as a result of this bill. In fact, according to an analysis from the Economic Policy Institute, that little boost could lift more than one million Americans out of poverty.

This is about our values—about how we protect one another, our families, and ourselves. For too long in Washington, Social Security has been under assault. We’ve heard over and over that we supposedly need to gut the program in order to “save” it. But for the 21 million Americans whose Social Security benefits are the only thing keeping them out of poverty, Social Security isn’t a luxury—it’s a lifeline. The absolute last thing we should do—at the very moment that Social Security has become so essential to millions of our seniors—is to allow the program to be dismantled inch by inch.

This isn’t just an argument about math, though. This is about our values—about how we protect one another, our families, and ourselves. In an uncertain world, protection against long-term disability and a guaranteed income for the families of survivors are core parts of the antipoverty safety net that our Social Security system provides. And, equally important, after a lifetime of hard work, people deserve to retire with dignity—and that means protecting and expanding Social Security.

The Nightmare Touched Its Forehead to My Lips