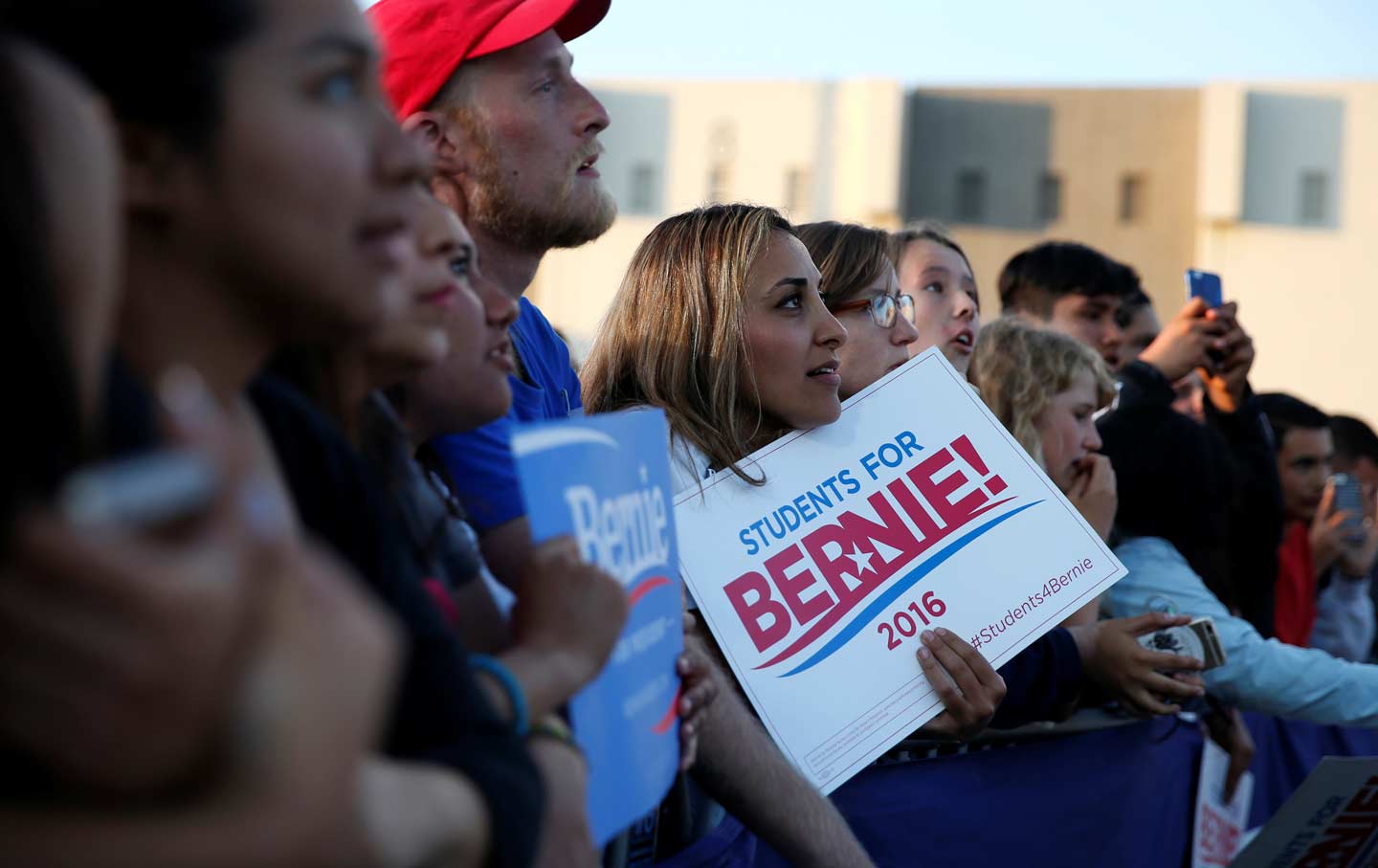 On Wednesday, November 9, at 9:47 am, BuzzFeed News sent out a push notification: “Trump is leading a global nationalist wave. The liberal world order is nearly over and the age of populism is here.” This, from a publication better known for listicles than sweeping political pronouncements. If even BuzzFeed felt it necessary to ring the death knell for the “liberal world order,” then liberalism must be really, really dead.

But what, besides global nationalism, can replace it? The answer is clear if we look at the 2016 election from its inception. The race we should be remembering is not just Clinton versus Trump, but Sanders versus Clinton. For nearly a year, millions of Americans supported an avowed socialist, and many of those people were young—like me.

This new New Left renaissance isn’t confined to the United States: Our British neighbors witnessed a similar wave of enthusiasm for Jeremy Corbyn. It’s kind of funny, if you think about it: The two most prominent politicians to galvanize young people in the United States and the United Kingdom over the last year are old white dudes. Sanders and Corbyn both look like my dad, except even older and less cool.

And it’s not just them—their ideas are old too. Or so it would seem to anyone who came of age before the fall of the Berlin Wall. Socialism, the redistribution of wealth, providing vital benefits and social services through the mechanism of the state—people were talking about this in the 1960s. And in the 1930s. And in the 19-teens. And now Sanders and Corbyn are recycling those hoary ideas (or so the argument goes), their only concession to the 21st century being the incorporation of racial-, queer-, and climate-justice rhetoric. (We can argue about how earnest they are and how successful that’s been).

In the 2016 primaries, Sanders won more votes from people under 30 than Hillary Clinton and Donald Trump combined.

And yet, in the 2016 primaries, Sanders won more votes from people under 30 than Clinton and Trump combined. Bernie pulled in more than 2 million of us; Clinton and Trump trailed far behind, with approximately 770,000 and 830,000, respectively.

Corbyn’s signature achievement thus far has been nearly tripling the size of the UK Labour Party. With over 550,000 members, it’s the largest political party in Western Europe. Though Corbyn’s supporters are not as strikingly youthful as Sanders’s—the influx of new members has barely changed the party’s average age—the youngest among them have a similar enthusiasm.

If you spent last year wondering why all these young people (“millennials,” as the headlines love to shout) have flocked to dudes even older and less cool than my dad, consider this: I’m 22. I was born in 1994. Bill Clinton was president. It was the era of the New Democrats in the United States and New Labour in the UK. Five years earlier, Francis Fukuyama had famously declared “the end of history,” and neither September 11 nor the global financial collapse had yet shaken that sense of security. My birth, and that of my generation, coincided with a huge geopolitical shift: For the first time in 50 years, the world wasn’t split in two along the familiar capitalist/communist lines of the Cold War. Seemingly, it had become whole.

George W. Bush was president for most of my childhood. My parents were Democrats in a red state, and at that point primarily defined their politics as being against the Iraq War and for same-sex marriage. Things like class, exploitation, and inequality were never mentioned, let alone a systematic way—like socialism—to think about them. I took up these anti-Republican positions with righteous gusto. In fact, I was co-president of my high school’s Young Democrats chapter, where I organized a screening of Jesus Camp and led discussions about the hypocrisy of the right’s “family values” agenda. Those were my politics.

The antidote to radical exploitation and exclusion is radical egalitarianism and inclusion.

The first president I voted for was Barack Obama, in 2012. By then, the shiny hope-and-change stuff had worn off a bit. I vaguely knew that drones were bad and that those responsible for the financial catastrophe a few years earlier had gotten off easy, but I didn’t think about it much. I was too busy binge-drinking in sweaty college basements—and hey, I’d voted for a Democrat. That was chill, right?

A child of the ’90s, I knew only neoliberalism. Socialism was brand-new.

It was during Obama’s second term that I began to understand how bad the financial crisis was and who was responsible (hint: the financial sector). Occupy Wall Street started to seem less like agenda-less rabble-rousing, as I had thought when I was co-president of the Young Democrats, and more like people confronting wealth and power in an unprecedented—and incisive—way. Thomas Piketty published his neo-Marxist tome, and its introduction alone fundamentally changed the way I understood economics. There was that viral video, based on a 2011 academic study of Americans’ perceptions of inequality, that used stacks of money to illustrate the wealth gap in United States. I must’ve seen it 30 times.

Four years later, as I finished college, Bernie Sanders shuffled onto the national political stage and offered an analysis: Poverty isn’t a natural phenomenon; it exists because a few people own far more than their fair share. He also offered a solution: The government could act on behalf of those of us just barely treading water. The government’s role, Sanders argued, is to correct the rampant inequality in this country by taxing the rich and using that money to offer real social services.

The erasure of socialist ideas from serious political discourse throughout most of my life wasn’t a historical fluke. The West’s victory in the Cold War—liberal democracy for everyone!—came at the price of iconoclasm, much of it celebratory. In Prague, there used to be a giant socialist-realist statue of Stalin and other communist leaders standing in a line on a hill overlooking the city from the north. Czechs called it the “meat line,” a joke about the long lines they had to wait in to get groceries. Now kids skateboard on the platform where the dictator once kept watch. To visit Prague now—or Budapest, or Sofia, or Bucharest, or Berlin—you might think that communism never happened. All that’s left are a few tacky museums and somber monuments.

So communism was killed, and along with it went any discussion of socialism and Marxism. This was the world of my childhood and adolescence, full of establishment progressives who were aggressively centrist and just as willing as conservatives to privilege the interests of capital over those of labor: think of the reckless expansion of so-called free trade, or the brutal military-industrial complex. For most of my life, I would have been hard-pressed to define capitalism, because in the news and in my textbooks, no other ways of organizing an economy were even acknowledged. I didn’t know that there could be an alternative.

It occurred to me recently that my peers and I will come of age in the era of Trump. It’s a bleak generational landmark, and not one I anticipated, but ideological capitulation and despair are not the answer. In the 1930s and 1940s, many of the most dedicated antifascists were communists. The antidote to radical exploitation and exclusion is radical egalitarianism and inclusion.

So we will be the opposition—but we’re not starting from scratch. The Fight for $15, organized in part by Socialist Alternative, went from a fringe dream to a political reality that has thus far spread to at least 10 cities and two states. Heterodox economists like Ha-Joon Chang, Mariana Mazzucato, and Stephanie Kelton are reshaping their discipline. And while Trump has dominated the headlines, there is still plenty of momentum around the socialist ideas that Bernie used to inspire America. Our Revolution is working hard to take the fight to the states; there it will be joined by groups like the Working Families Party and the Democratic Socialists of America, whose membership has grown by more than 50 percent since November 8. That’s more than 4,000 new members.

When I heard Bernie say, out loud, that the billionaire class was ruthless and exploitative, that sounded groundbreaking. Not only did he name the right problem—inequality, not poverty—he named the culprit. I didn’t know you could do that. To me, and to hundreds of thousands of my peers, Sanders’s (and Corbyn’s) socialism doesn’t feel antiquated. Instead, it feels fresh and vital precisely because it has been silenced for so long—and because we need it now more than ever.

My dad—slightly younger and slightly cooler than Sanders and Corbyn—picked me up from the airport the day before Thanksgiving. In the car, he confessed: “I liked a lot of the things Bernie had to say, but I just didn’t think he could get elected.” He sighed, ran a hand through his white hair, and pushed his glasses up his nose. “I thought Hillary had a better shot, but she couldn’t pull it off. Maybe Bernie could have… Wisconsin, Michigan, Ohio…”

My dad sounded humble. Trump’s election, which to so many of us feels like a tragedy, prompted him to consider a new way of thinking. Maybe socialism isn’t a lost cause after all. Maybe it’s our best hope.