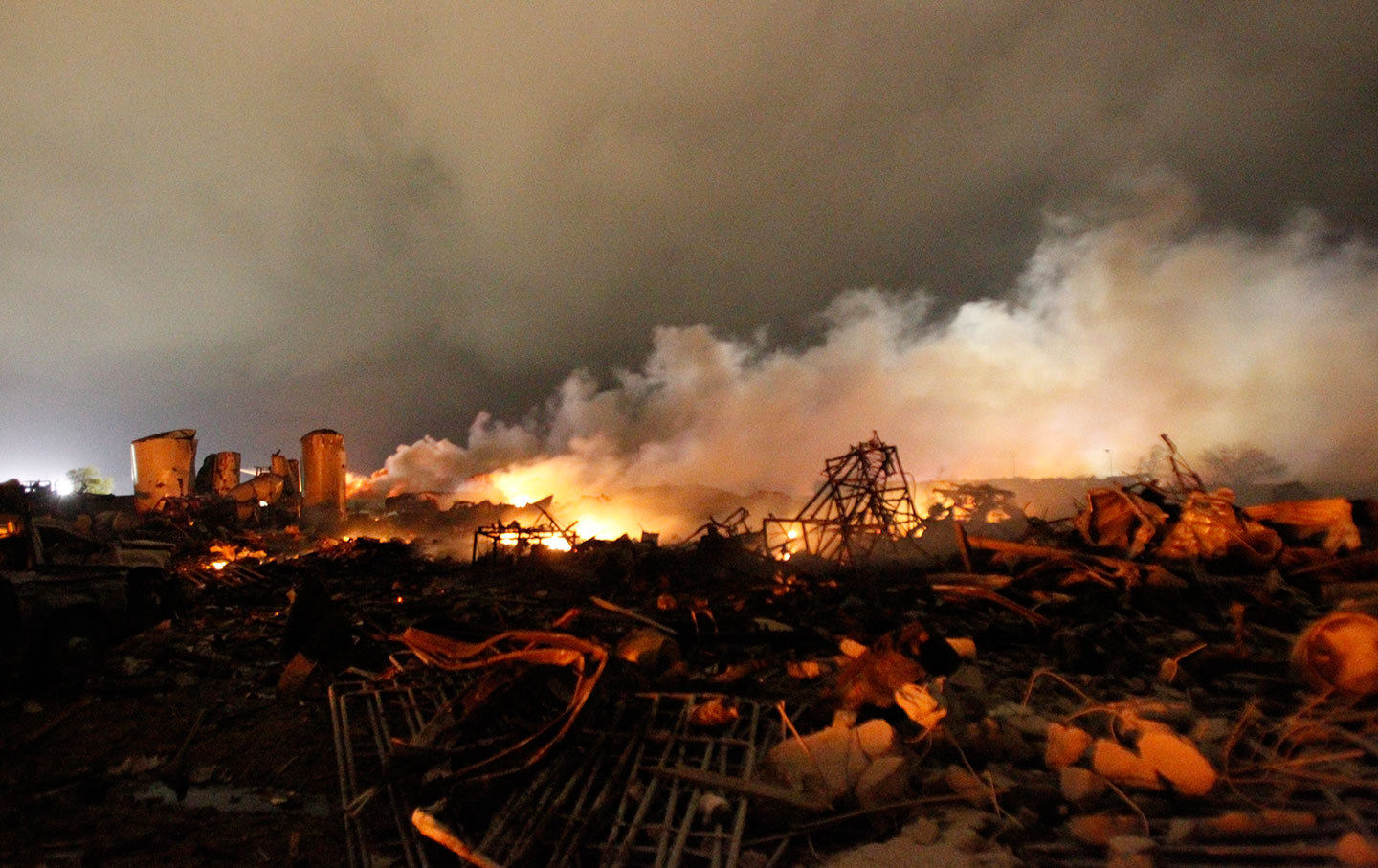 The remains of a fertilizer plant in West, Texas, on April 17, 2013, after an explosion. (Reuters / Mike Stone)

It’s a safe assumption that most Americans have not heard of the US Chemical Safety Board. Donald Trump is certainly banking on that, since he proposed scrapping it in his recent budget proposal. But if the small agency is indeed defunded, the results could be catastrophic—and we might be left wondering, as the bodies are counted after some large chemical disaster, why nobody was angry when the CSB went away.

Modeled after the National Transportation Safety Board, which famously investigates plane crashes and explains to everyone what happened, the CSB choppers into chemical plants after a serious accident, particularly when dangerous chemicals were released or workers were killed. The engineers at CSB do a detailed, sometimes years-long process audit of what went wrong, and then puts out a report. (If you want to get lost in a fascinating YouTube rabbit hole, check out the CSB’s channel, which has developed a small cult following for its well-produced explanations of complex chemical accidents.)

The CSB is not a regulatory body, and it doesn’t have rule-making power. That actually makes its job easier, because chemical producers throw up fewer roadblocks to CSB investigators as they labor to pinpoint what went wrong. The agency’s work is critical because most federal regulators who also investigate chemical accidents—the Environmental Protection Agency or the Occupational Health and Safety Administration—look almost exclusively at what existing regulations were violated, if any.

But the CSB takes a much broader view to its accident investigations. It studies the causes of dangerous chemical accidents outside of existing rules, and often unearths process problems regulators don’t yet know about. It recommends best practices going forward, and these recommendations are often used to write new regulations at the state and federal levels. It’s not unusual for the industry itself to look at CSB recommendations and implement them voluntarily.

If Trump succeeds in defunding the CSB, that’s work that will largely be left undone—in a nation with a creaking chemical-production infrastructure. It’s expensive to shutter old chemical plants because of remediation costs, and many are being extended past their planned lifetimes. The federal government doesn’t track chemical accidents—a small scandal in itself—but best estimates seem to indicate an uptick. The Deepwater Horizon blowout and the large explosion at a fertilizer plant in West, Texas, are the most memorable accidents of the past decade; in West, 15 people were killed and hundreds of homes were destroyed in 2013. Forty-six people have died in US chemical plants since then.

This is why worker and safety advocates are panicked by the CSB’s potential defunding.

“There are things that American industry does that would make accidents like Bhopal look small,” said Michael Wright, director of health, safety, and environment for the United Steelworkers. (A gas leak at a pesticide plant in Bhopal, India, killed several thousand people in the mid-1980s.) “There are some things which in a worst-case scenario could affect a million people.”

The union has workers in two-thirds of the country’s refining capacity plants, and are pushing hard for the CSB to remain funded—or even have its funding increased. Wright says the union often pushes for chemical-accident investigations the CSB doesn’t have the capacity to handle even at current levels. “It’s hard to see how we can cut their budget any more than it already is,” Wright said.

The agency’s paltry budget makes the proposed cut rather bizarre. It only receives about $12 million annually, a true pittance in the grand scheme of the federal budget. It has a staff of less than 50 people, mostly engineers, working out of a small office in downtown DC. Trump’s trips to Mar-a-Lago are pegged at costing $3 million per visit, which means his vacationing budget in the first 100 days of his presidency will easily surpass what it takes to fund the CSB for a whole year.

While Republicans did make a show of asking for CSB chair’s resignation in 2014 over a management crisis, virtually nobody in Congress has even mentioned the agency since. That chair was forced out by Obama, and the current chair, Vanessa Sutherland, was unanimously confirmed by a voice vote in the Senate two years ago.

Asked to speculate, the Senate aide imagined the White House “needed to find a bunch of money to buy more weapons, to build a wall. And they found it where they could find it.”

There is also a troubling lack of detail to the budget proposal. The CSB was created by Congress during the 1990 revisions of the Clean Air Act, and that legislation created the agency’s statutory authority and five board positions. Trump merely proposes defunding the CSB, which would still leave the board members in place and the CSB existing as kind of a zombie agency with a legislated purview but no money to carry it out.

“I don’t see how you would re-establish its function without different authorizing legislation from Congress,” said the Senate aide. The White House did not respond to a query about whether it would pursue this legislation, or who else might do CSB’s work.

All of the CSB’s existing investigations would presumably be shuttered. The agency is looking into the accidental release of of methyl mercaptan at a DuPont insecticide plant that killed four workers in LaPorte, Texas, in 2015; a gas plant explosion in Pascagoula, Texas, last year; an explosion of nitrous oxide tanks that killed one person in Pensacola, Florida, and several other accidents.

Congress still has to make actual appropriations, and may discard all or part of Trump’s proposal. Advocates say scrapping the CSB or reducing its funding would be the definition of penny-wise and pound-foolish. “The cost of even one catastrophic accident would be an order of magnitude larger than the CSB’s entire budget from the day it was created. So it’s probably the best deal in Washington, in terms of just a economic cost-benefit analysis,” said the Steelworkers’ Wright. Adding human lives to the equation, he added, would make the loss incalculable.