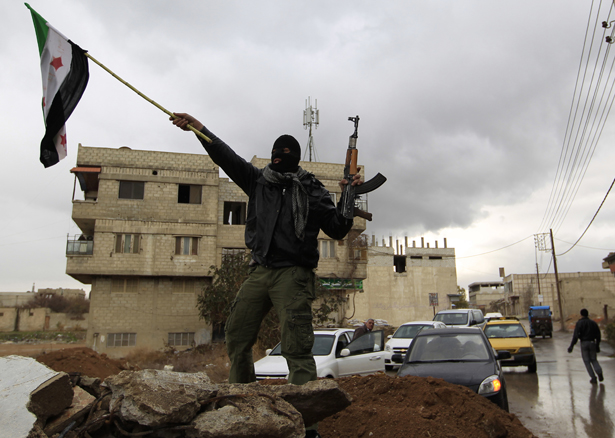 There’s a phony war in Ukraine, and a real, live one in Syria, where up to 150,000 people have been killed since 2011. (Iraq, however, is on track to match Syria before long.) In brutal fighting that often verges on massacres and outright mass slaughter, lately the government of President Bashar al-Assad has upped the ante. On Thursday, “barrel bombs” and missiles rained down on what The New York Times described as a “bustling market” in Aleppo, blowing thirty-three people apart and leaving scenes that were videotaped as a record of the carnage. (Don’t watch if you don’t have a strong stomach.)

And just the day before, Syrian airstrikes hit an elementary school in Aleppo, killing twenty—including seventeen children. According to Human Rights Watch, hundreds of people have been killed in barrel-bomb attacks, which are powerful and indiscriminate, and HRW says that they’ve been used at least eighty-five times in Aleppo since February.

What can the United States, or anyone, do? Not a lot. Diplomacy is faltering, except in regard to Syria’s chemical weapons. In Syria’s civil war, Assad—who’s announced plans to run for re-election in June—is winning. Backed by Russia (which has even more reason now, after Ukraine, to give the United States a black eye in Syria) and Iran (which, on the other hand, may be willing to compromise on Syria as it moves toward a deal with the United States over its nuclear program), Assad is steadily gaining ground in a war in which there are no “good guys.” The Islamist-extremist anti-Assad forces, led especially by allies of Al Qaeda and radicals even more extreme, such as the Islamic State of Iraq and Syria (ISIS), have committed atrocities of their own. And inside Syria, more and more it’s looking like Assad will stick around, at least in the medium term, with many Syrians fearful that the Islamists might be a lot worse than the government.

That said, the hawks and neoconservatives who’ve been itching to get more deeply involved in Syria’s civil war say that they’ve found a group worth supporting, finally: it’s called Harakat Hazm, which means “Steadfastness Movement.” And it’s being promoted by the Washington Institute for Near East Policy (WINEP), which is singing its virtues:

Harakat Hazm formed in January 2014 via the merger of twenty-two separate rebel units. According to its founding documents, it is a “revolutionary political organization with a military wing…working to bring down the regime in Syria and seeking to restore the freedom and dignity of the Syrian people.” There is very little Islamist content in these documents or the group’s various Internet postings. In general, the movement appears more interested in warfighting against the regime than the infighting that has long plagued the political and military opposition.

In short, Harakat Hazm appears to be a model for the type of group the United States and its allies can support with meaningful, lethal military assistance. It seems to meet several important military and political criteria, and how it rates on others can be determined by contact with the organization and intelligence collection. That process already appears to be under way for this group and, perhaps, other rebel factions on the more secular/less Islamist side of the spectrum. In addition to providing more weapons, an assistance program could improve the skills of individual fighters and whole units, making them more effective on the battlefield. Efforts to enhance command and control and establish sound logistics would have similar benefits.

The Washington Post, ever hawkish on Syria and no doubt prompted by WINEP in its coverage, reported earlier this week on Harakat Hazm’s work in Syria, noting with satisfaction that it has been “entrusted with the first American missiles to be delivered to the Syrian war.” Says the Post:

But the arrival at the base last month of U.S.-made TOW antitank missiles, the first advanced American weaponry to be dispatched to Syria since the conflict began, has reignited long-abandoned hopes among the rebels that the Obama administration is preparing to soften its resistance to the provision of significant military aid and, perhaps, help move the battlefield equation back in their favor.

According to the Post, HH has 5,000 fighters, which seems exaggerated, at the least—but one of its leaders did give the Post a walking tour of one of its bases. The antitank missiles that HH possesses were delivered not the United States but by the so-called “Friends of Syria.” Yet only one willfully blind wouldn’t say that the United States is behind it. Although the Post didn’t notice any CIA people around HH’s base, NPR, thanks to Tom Bowman and Alice Fordham, tells us:

The U.S. is providing more arms and training to the moderate rebels in Syria, under a growing secret program run by the CIA in Jordan. Sources tell NPR that secret program could be supplemented by a more public effort in the coming months involving American military trainers. …

Sources briefed on the covert effort say that the intelligence community will continue to lead this “robust” program of increased arms and training. The White House will see how this effort develops before deciding on whether the Pentagon would play a more public role.

This first covert shipment of TOW missiles is a test, said a member of the Syrian opposition briefed on the negotiations. The Harakat Hazm rebels, considered a moderate group, say they have received 50.

If that’s true, it’s a further tilt by the Obama administration toward an escalation of the war in Syria. In fact, that war is lost, and the United States ought to admit it and pull up stakes rather than continue the futile conflict. Inside the Obama administration there has long been a divide between the White House, which resisted deeper involvement, and hawks at the CIA and State Department (including Secretary of State John Kerry), who wanted to bomb Syria and provide lethal aid to the anti-Assad rebels.

Could it be that the worsening of the US-Russia standoff on Ukraine will push the White House to try to get back at Moscow through Syria? Let’s hope not.

That’s precisely the policy advocated by Anne-Marie Slaughter, the aptly named foreign policy expert and former State Department official, whom I’ve criticized before. In an op-ed for CNBC, called “Stopping Russia Starts in Syria,” Slaughter calls for bombing Syria to get back at Putin:

It is time to change Putin’s calculations, and Syria is the place to do it.… A US strike against the Syrian government now would change the entire dynamic. It would either force the regime back to the negotiating table with a genuine intention of reaching a settlement, or at least make it clear that Assad will not have a free hand in re-establishing his rule.… Equally important, shots fired by the US in Syria will echo loudly in Russia.

And her incredibly reckless conclusion: “Striking Syria might not end the civil war there, but it could prevent the eruption of a new one in Ukraine.”