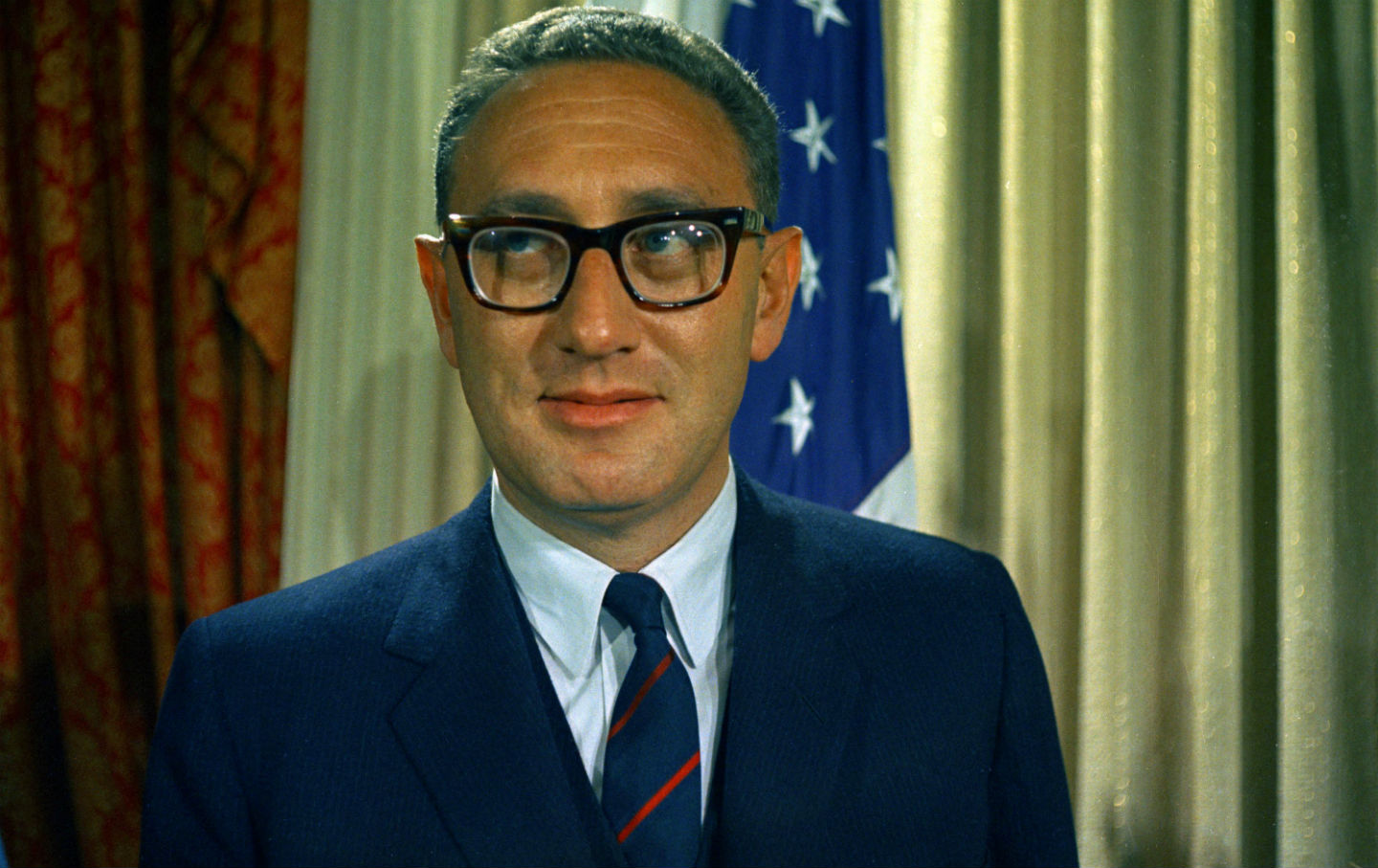 Last week, Henry Kissinger was back in the news, or Fox News at least, saying he disagreed with Rand Paul’s stance on domestic surveillance and urging the United States to escalate its fight against ISIS.

Neither position should be surprising. Within months of entering the White House as National Security advisor in early 1969, Kissinger goaded Richard Nixon to place illegal wiretaps on close friends and associates, journalists, and government officials, including his own NSC aide Morton Halperin (father of political commentator Mark). FBI Director J. Edgar Hoover’s memo of his phone call with Kissinger notes that Kissinger “hoped I would follow it up as far as we can take it and they will destroy whoever did this if we can find him, no matter where he is.”

As to the fight against ISIS, of course he wants to escalate. That’s been his advice since Cambodia, Vietnam, and Laos and onward through Angola, Mozambique, Panama, Central America, Libya, the first Gulf War and the second. In Kissinger’s grand strategy, escalation is always required so that de-escalation can proceed. We’ve been bombing Iraq continuously since 1991, a cause that our foreign policy establishment refuses to connect to the effect of the current catastrophe in the region.

Kissinger, out of public office since 1977, has cheered on the United States every step of the way as it plunged into the Persian Gulf. Here he is in 1996, telling Bill Clinton to increase the number of cruise missiles he was sending into Baghdad: “The issue in Iraq is not the hiding of biological weapons,” Kissinger said; “the issue is, do we have a strategy for breaking the back of somebody we don’t want to negotiate with? And if we’re not able to do that, how can we then avoid negotiating with him? If we are not able to destroy and we are not able to isolate him, we’re only going to demonstrate our impotence.”

That, Kissinger said—trying to establish the domestic will to break the back of adversaries—was what he and Nixon tried to accomplish in Vietnam. “Whether we got it right or not,” Kissinger said, “is really secondary.”

It’s not that remarkable a statement. At least it is honest: What matters is the effect that the will to bomb (or, if possible, actual bombing) has on us, providing a sense of purpose so we can bomb some more. Kissinger, despite his reputation, isn’t a realist—or at least he doesn’t believe that policymakers have access to reality. Rather, perception of reality has to be created by resolved, circular action: The projection of power creates our understanding of purpose and an understanding of purpose allows us to project power. “Whether we got it right or not,” Kissinger has said, “is really secondary.”

In any case, I’m about to publish a book, Kissinger’s Shadow, in August, that takes seriously Kissinger’s philosophy of history (as it evolved from Cambodia to Iraq), connecting it to deeper intellectual currents found in American exceptionalism. Rather than understanding Kissinger as opposed to the heady adventurism of the neocons—of Dick Cheney, Paul Wolfowitz, and so on—I try to show, how his unique, highly self-aware brand of imperial existentialism prepared the ground for Washington’s drive into Iraq.

In other words, before we had the arrogant metaphysics we associate with neoconservatism—Cheney’s belief that hunches and intuition are more important than hard evidence, the idea that the United States is an empire, and as an empire it makes its own “reality,” and the insistence that we shouldn’t let yesterday’s blowback get in the way of tomorrow’s bold action—we had Henry Kissinger. Kissinger’s Shadow is available for pre-order; and here’s a first review from Publishers Weekly.

In the meantime, to help get a sense of just how wrong the conventional wisdom is about Kissinger’s supposed realism, it might be fun to play a game: “Who said it? Henry Kissinger or…?”

1. Who said it, Henry Kissinger or Friedrich Nietzsche?

“History is…an endless unfolding of a cosmic beat that expresses itself in the sole alternatives of subject and object, a vast succession of catastrophic upheavals of which power is not only the manifestation but the exclusive aim; a stimulus of blood that not only pulses through veins but must be shed and will be shed.”

2. Who said it, Henry Kissinger or Hegel?

“Necessity describes the past but freedom rules the future.”

3. Who said it, Henry Kissinger or Schopenhauer?

“Meaning represents the emanation of a metaphysical context…every man in a certain sense creates his picture of the world.”

4. Who said it, Henry Kissinger or Friedrich Nietzsche?

“Life is suffering, birth involves death. Transitoriness is the fate of existence.”

5. Who said it, Henry Kissinger or Rosa Luxemburg?

“Imperialism is the inevitable product of Civilization.”

6. Who said it, Henry Kissinger or Mario Savio?

“Serving the machine becomes a more absorbing occupation than defining its purpose.”

“For if the trumpet gives forth an uncertain sound, who shall prepare himself for battle?”

8. Who said it, Henry Kissinger or Heidegger?

“The microcosm contains tension and polarity, the loneliness of the individual in a world of strange significances, in which the total inner meaning of others remains an eternal riddle. Rhythm and tension, longing and fear, characterize the relationship of the microcosm to the macrocosm. Organisms contain consciousness (Dasein-Being). Animals represent Waking-Being (Waking-Consciousness, Wachsein). Only in sleep everything reverts to mere Being. For Man waking-being is confined to the realm of the eye. The sounds of the night, the odor of flowers all stimulate a ‘whither’ in the world of light. Of the world of scent, man knows little, of the nature of the butterfly, whose crystalline eyes focus a picture of myriad possibilities, nothing. Thus night has always been felt as akin to death and the idea of an invisible God constitutes the highest manifestation of human transcendence.”

9. Who said it, Henry Kissinger or Karl Rove?

“An expert respects ‘facts’ and considers them something to be adjusted to, perhaps to be manipulated, but not to be transcended…. In the decades ahead, the West will have to lift its sights to encompass a more embracing concept of reality…. There are two kinds of realists: those who manipulate facts and those who create them. The West requires nothing so much as men able to create their own reality.”

10. Who said it, Henry Kissinger or Dick Cheney?

“In reaching a decision, [the statesman] must inevitably act on the basis of an intuition that is inherently unprovable. If he insists on certainty, he runs the danger of becoming a prisoner of events.”

“You have a responsibility to recognize that we are living in a revolutionary time.”