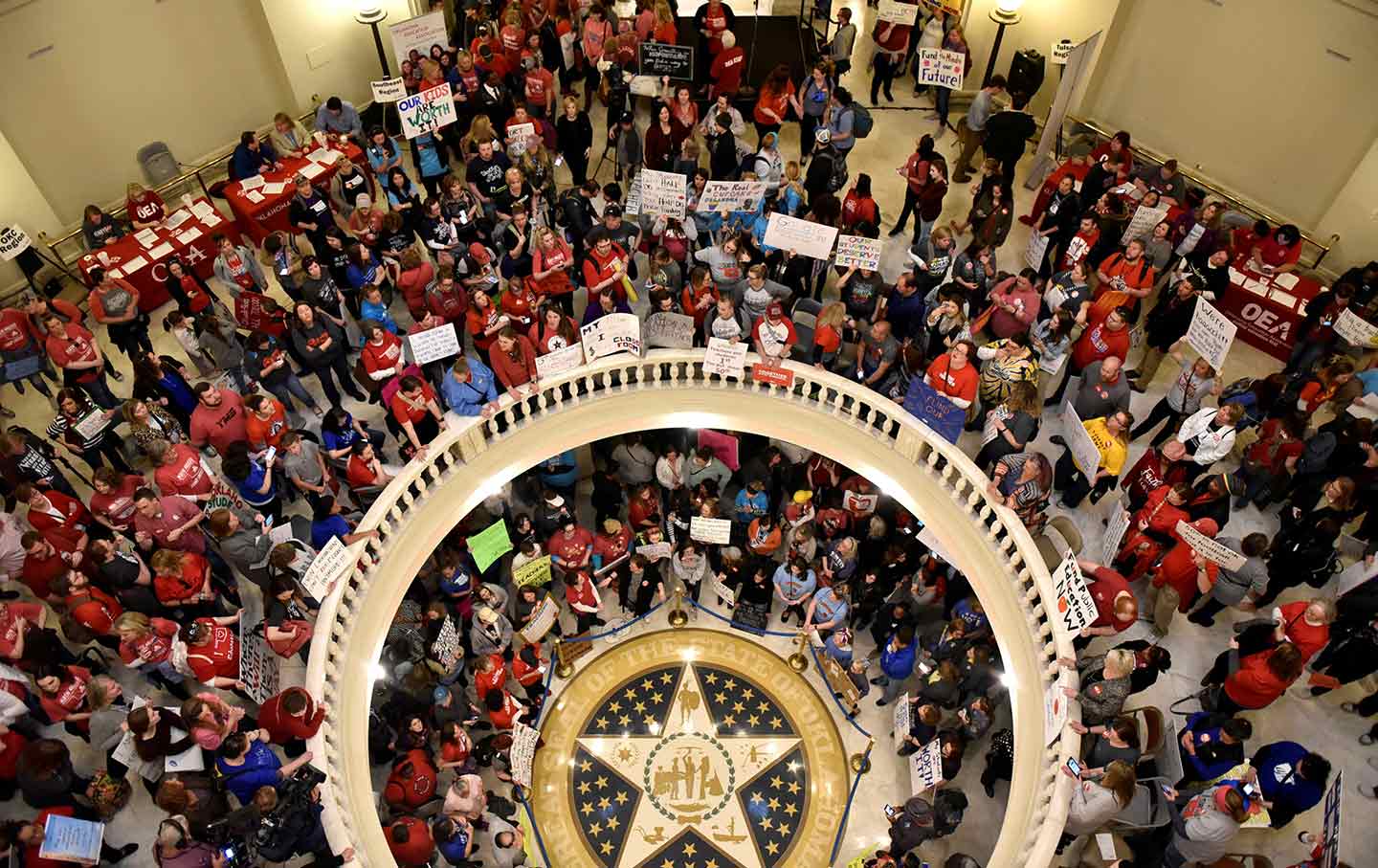 Teachers protest at the state capitol on the second day of a teacher walkout in Oklahoma City, Oklahoma, April 3, 2018. (Reuters / Nick Oxford)

Unlike the economy, health care, or military aggression, education is rarely an issue that commands urgent attention. However, every once in a while, education creeps to the top of headlines when you least expect it.

Most recently, the school shootings at Marjory Stoneman Douglas High School in Parkland, Florida, forced the issue of gun control to the fore for policy-makers who managed to dodge it even after the mass shooting in Las Vegas. The fact that young people followed up with the March for Our Lives, and demonstrations were held around the country, followed by lobbying efforts to change gun laws, has made this mass killing different.

Similarly, teacher strikes in West Virginia and now Oklahoma have caught many by surprise. With a strong possibility that strikes may also break out in Kentucky and Arizona, it’s beginning to look as though teachers may be at the forefront of a major comeback by organized labor. The fact that these strikes are occurring in red, “right-to-work” states, where trade unions have limited influence, adds to their political significance and potential. Given the success of the strike in West Virginia, it could very well be that teachers in other states will be inspired to follow their example.

The reasons for the labor unrest among teachers are obvious to those who have been following education. Under the guise of fiscal austerity, several states have carried out severe cuts to education that have impacted everything from facilities and infrastructure to textbooks and teacher salaries. Long after the 2008 recession had passed, several states failed or outright refused to restore badly needed funding to education. Teachers have been hit especially hard by a refusal on the part of several state legislatures to increase salaries as the economy has improved. There have been several reports of teachers’ being forced to rely on charity for food, or to endure long commutes in search of affordable housing because salaries have not kept up with increases in the cost of living.

But the strikes are not just about wages and benefits. Over the last few years, several states have enacted severe budget cutbacks that have severely impacted schools. In Oklahoma, where teacher pay is among the lowest in the nation, students are forced to use textbooks that are outdated and falling apart; school buildings often lack air conditioning and heat; and in several districts across the state, schools are open only four days a week. David DuVall, executive director of the Oklahoma Education Association, explained how the situation in schools became so dire: “[C]lass size limits, librarians, those kinds of things, still exist in law, but there is a moratorium on those being required because of a lack of funding.”

In response to the labor action in Oklahoma, Education Secretary Betsy DeVos told The Dallas Morning News: “I think about the kids…. I think we need to stay focused on what’s right for kids. I hope that adults would keep adult disagreements and disputes in a separate place and serve the students that are there to be served.” DeVos has said she wants kids back in school, but has offered no plan for addressing the problems that have sparked the strikes. She recently admitted on 60 Minutes that she had never visited an underperforming school. With such limited understanding of the realities facing the public schools she is charged to lead, it’s hardly surprising that she would be oblivious to the concerns being raised by teachers.

Governor Matt Bevin (R-KY), also tried to use the children to get teachers back to work. He suggested that “real teachers…want to teach their children” and that the teachers union was opposed to that goal. Governor Mary Fallin (R-OK), characterized teachers in her state as “greedy and childish,” equating their behavior to that of “a teenager wanting a better car.” 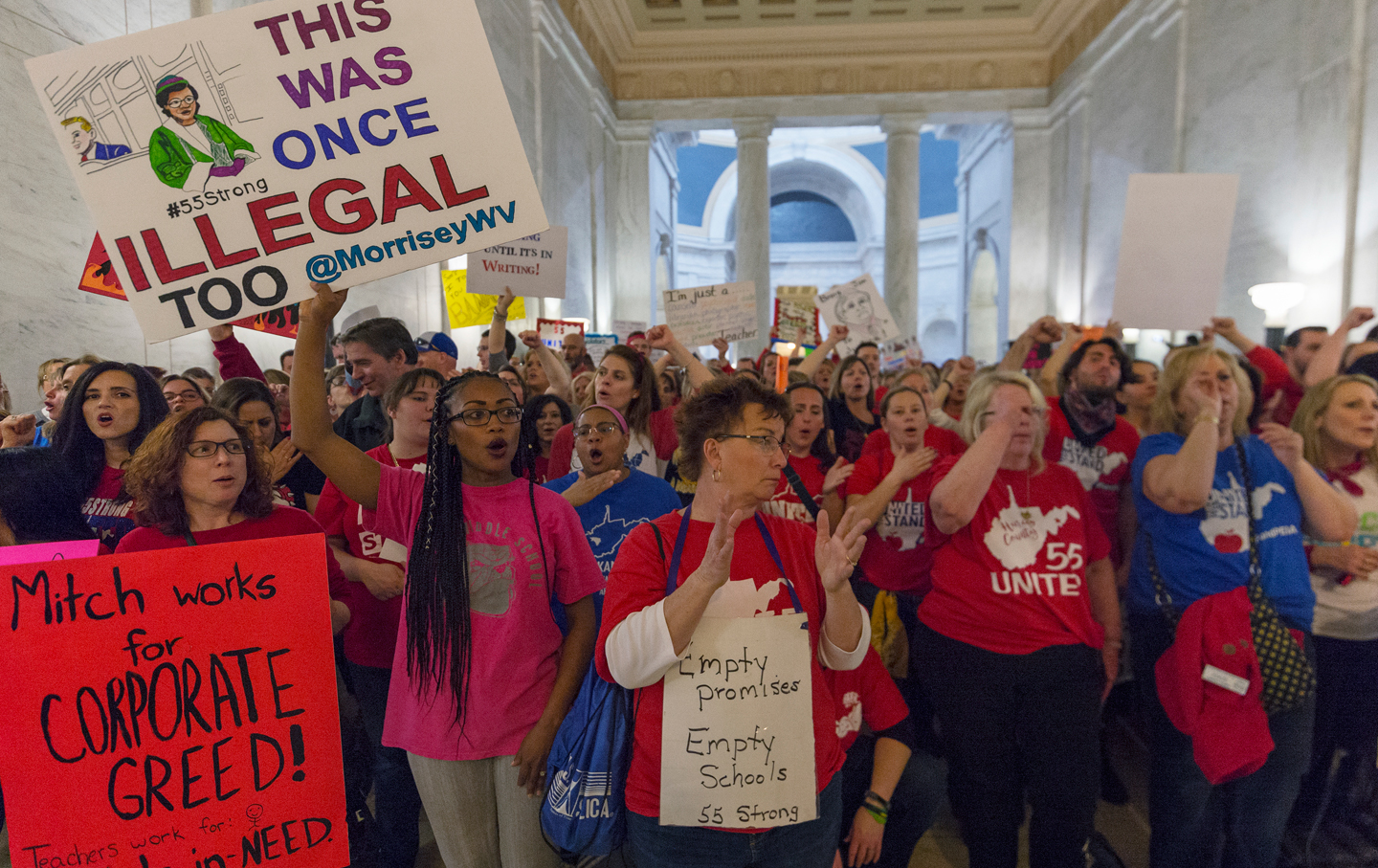 Teachers Are Leading the Working-Class Insurgency

But attacking teachers unions no longer seems to be an effective tactic. Despite the onslaught from Republican politicians, teachers have held firm, and their support from the broader public has grown. Oklahoma has already offered teachers a $6,000-a-year raise—a concession that falls well short of the $10,000 increase they demanded. Teachers have rejected the offer and are demanding that $200 million be restored to slashed education funding. Similar demands are being raised in Arizona and Kentucky, and it’s possible that other states where draconian cuts to education have been implemented will follow.

Hopefully, the teachers’ labor actions mark the beginning of a change in direction for education in the United States. Like the recent student-led marches for gun control, the teachers’ actions have galvanized the public. In many respects, the strikes are the culmination of a long-simmering response to the numerous attacks that have been directed at teachers, and public education generally, under the guise of “reform.” In several cities and states, Republicans, and in some cases Democrats, have promoted a package of measures—expansion of charter schools, vouchers, state takeover of school districts (primarily those that serve poor children of color)—that have undermined and weakened public education. The impact of these measures has been particularly devastating in cities where the reformers have sought to privatize and dismantle school systems they claimed were “failing.”

However, despite the vast amount of private-foundation and hedge-fund money behind them, these reformers are losing steam. Recent research and exposés on the reforms carried out in cities like Washington DC; Newark; and New Orleans, which were once held up as models of “innovation,” have stalled the reformers’ momentum and revealed their promise of improvement as nothing more than a ruse. Rather than renewing and reinvigorating the nation’s schools, these measures have undermined the ability of public schools to carry out their basic mission.

It’s become clear that the fight over the future of public education is a major front in the fight over the future of American democracy. The teachers’ strikes and the public support they’ve generated are a resounding affirmation that those who see a strong public education as critical to America’s future are not giving up. In fact, they may now even have the upper hand in the ongoing fight over our nation’s schools.