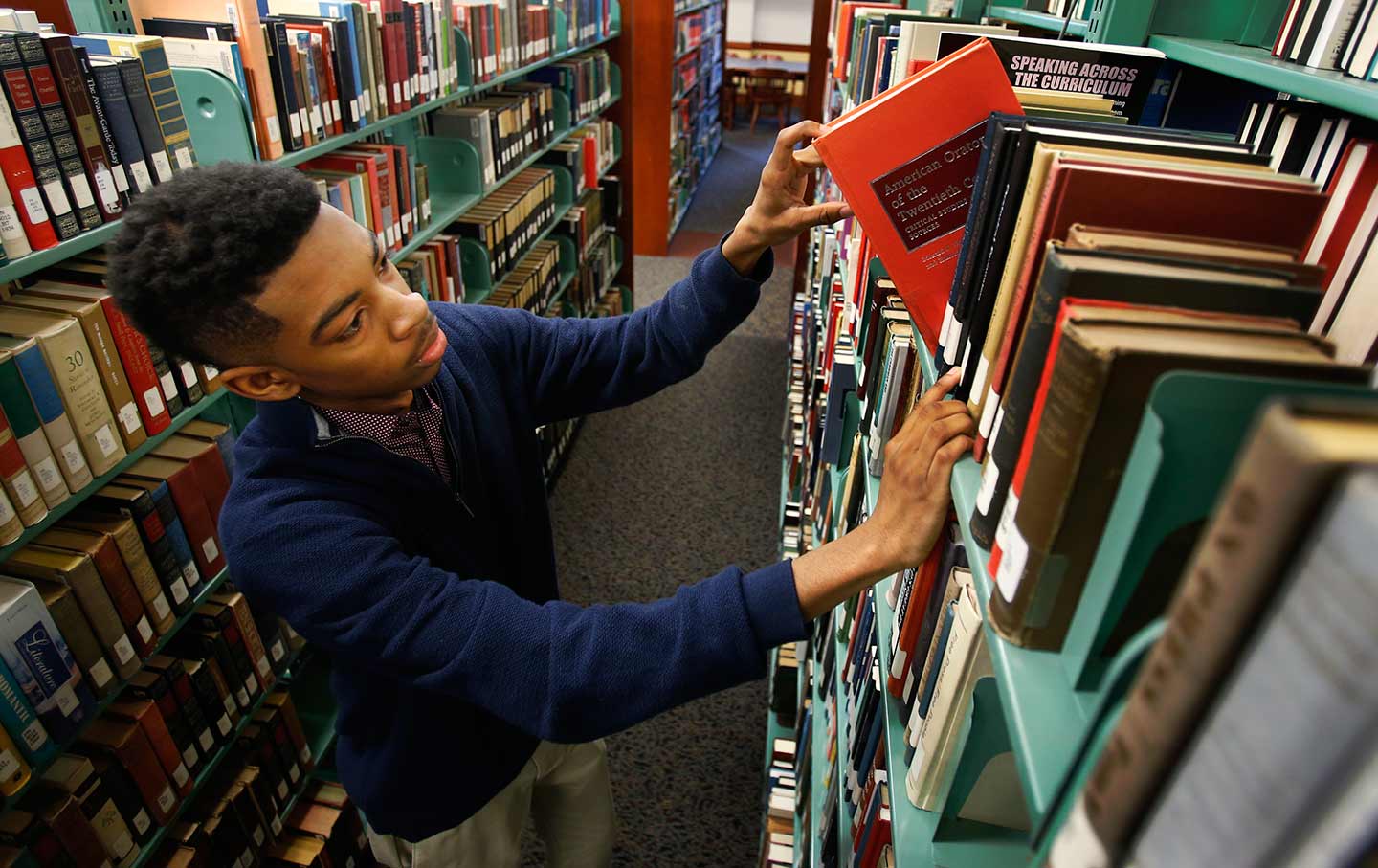 A student looks for a book in the library at Hampden-Sydney College in Virginia, January 2018. (AP Photo / Steve Helber)

A newly published study by researchers at Stanford, Harvard, and the US Census Bureau confirms what many activists and experts on race and class in the United States have argued for some time: Race matters in itself. Focusing solely on class as a source of disparity does not automatically improve outcomes for all racial groups.

The study, by Raj Chetty, Nathaniel Hendren, Maggie Jones, and Sonya Porter, uses Census data and tax records from a cohort of parents and their children to map intergenerational income disparities by race. The most striking finding is the downward mobility across the income spectrum for black men. White children from families in the top fifth of the distribution have a 41 percent chance of staying in that percentile as adults, whereas black children have only an 18 percent chance. This gap persists even when black and white children come from families with the same family structure and educational background. And it shows that income mobility looks very different for black men and white men. Black men are less upwardly mobile than white men no matter what part of the income distribution they grew up in. Black men born in the 75th income percentile end up 12 percentiles lower in the distribution than white men of similar situations. (This difference does not appear to exist to the same degree between black women and white women, but it is important to note that this does not mean the wage gap between white and black women has been closed.)

What makes this study so important is the size of the data set used. The authors have unrivaled access to tax records, allowing them to marry individual and family characteristics to income. They can therefore compare a parent’s income to that of the child they claimed on their tax forms, allowing for an intergenerational study. Because income earned from wages, marital status of parents, and educational-attainment records give us a limited window into a family’s true economic situation, the researchers use the American Community Survey data and other Census data to generate a proxy for wealth when studying intergenerational racial disparities in income. This included sources of wealth like homeownership, home value, and vehicle ownership.

But that’s only the beginning of how families accrue wealth—and it’s important to understand how families accrue it, given that some families’ sources of wealth provide them with economic and political influence that in turn impacts families all along the distribution. Other sources of wealth like inheritances, business equity, and retirement accounts also vary by race. The study also does not account for grandparents’ income, which would add useful context to their analysis of one generational cohort. These limitations mean that the researchers’ measures of wealth don’t fully capture the racial differences in kinds of wealth and income at the top of the distribution. As the study notes, there is more intergenerational persistence at the top of the distribution. In other words, being incredibly well-off keeps you incredibly well-off at a higher rate than just being moderately well-off. And, notably, the very top of the income distribution is mostly white.

Sources of non-wage income like stock options and inherited wealth vary greatly by race. Given the history of housing discrimination and job discrimination in the United States, inherited resources vary greatly. The Federal Reserve’s Survey of Consumer Finances found that 26 percent of white Americans receive inheritances, compared to only 8 percent of black Americans. Meanwhile, black families are half as likely to own businesses as white families. Research led by Darrick Hamilton and William Darity Jr. shows that wealth disparities, especially within inherited wealth, hold back black families with similar educational credentials as white families from achieving the same level of financial stability.

I asked Raj Chetty, one of the study’s authors, about the limitations of the data on wealth. “While we weren’t able to look more at the composition of wealth at the top of the distribution, I don’t think that has a large impact on the overall mobility story we are telling,” he responded.

Chetty is right that most families do not own the kinds of assets we see at the very top of the distribution. But the economic success of the families at the very top of the distribution does not always affect just those families. Some families’ wealth is the result of their influence on the economic prospects of others. That means that in order to close the race gap, we need to limit certain kinds of economic activity, not just create more opportunity.

Wealth at the very top, especially in the years leading up to and after the financial crisis, has been accrued due to activities that don’t add value to the economy—or, worse, hurt specific communities. Economists’ term for this is “rent-seeking,” meaning individuals or institutions manipulate economic conditions or public policy in order to increase profits beyond what would be competitive in the market. The sociopolitical power that economic rents afford is essential to understanding the persistence of inequality across generations and the political forces that must be overcome to break down barriers to mobility for marginalized groups, especially for black men and women.

Rent-seeking, by definition, is nonproductive. One recent egregious example is the rent-seeking that played a major role in the financial crisis. Leading up the crisis, investors made non-wage income from complex financial products that spurred subprime mortgage lending. This income was made from economic activity that hurt rather than helped the economy. The housing foreclosure crisis was one devastating result.

Incarceration is another such example. According to Chetty et al., on any given day, 21 percent of low-income black men in the cohort studied are in the prison system. The study argues that incarceration explains some—not all—of the black-white male gap. However, incarceration is not just a negative outcome for those we incarcerate. It also leads to profit for individuals at the higher end of the income distribution. The incarceration of black men (and women) is an input into an industry that produces economic gains.

Wealth at the very top, especially in the years leading up to and after the financial crisis, has been accrued due to activities that don’t add value to the economy—or, worse, hurt specific communities.

The increasing privatization of the American prison system injects a profit motive into the plague of incarceration within communities of color. For-profit companies are responsible for 18 percent of federal prisoners and 7 percent of state prisoners. These companies are invested in keeping their profits high, spending millions of dollars on lobbying and campaign contributions for decisions that keep people in the criminal-justice system. Not only do private prisons facilitate higher rates of imprisonment, they also are a part of the larger trend in pay inequality in the labor market. Private-prison CEOs make 28 times more per hour than the correctional officers they employ. This does not account for additional forms of compensation they receive. For instance, in 2017, the CEO of GEO Group, one of the largest private-prison corporations, received a wage of $1 million, plus over $8 million in additional compensation. Furthermore, correctional officers at private prisons make less than those at public prisons, and, that gap is increasing. The economic gains of the private-prison industry are at the expense of opportunity for communities of color, especially black men.

The rents gained from incarceration are just one piece of the rent-seeking happening in the American economy. But, it’s an illustrative case. The mobility of individuals and families does not happen within a vacuum. There are institutional environments—even beyond neighborhoods—that shape the options available to people. It is common to assume that individual prospects can be improved through access to resources, like education and job training. And that is part of the story. But the reality is that negative outcomes for some produce rents for others. Understanding the persistence of economic success at the very top tells us a lot about who gains the most given our political and economic institutional arrangements. Unfortunately, the limitations in wealth measurement that this study faced are common across the board. Overcoming these limitations, to better understand things like intergenerational inheritances by race or the role of capital ownership, can tell a richer story of who stands to gain the most by maintaining the status quo in the United States.

Changing the status quo of income mobility by race, especially for black men, requires a set of policies that do more than increase access to resources like education. Those factors that impede upward mobility for black men while leading to economic gains for others require structural reform and a rethinking of what adds value to the economy. Reforms that remove financial incentives from incarceration, ranging from bail reform to the ending of federal contracts with private-prison corporations, strike at the structural nature of the system. Moreover, policy-makers should rethink the rate of incarceration to begin with. Closing jails and prisons and moving toward a more rehabilitative model for nonviolent offenders is increasingly politically tenable.

When I asked him about the factors that had the potential to dramatically change the patterns found by the study, Chetty said: “You have to wonder whether, for men, changes in incarceration policy, criminal-justice reform will have a payoff in the coming years.”

Indeed, for policy-makers, in statehouses and in Washington, the challenge will be to take the stark racial gap in mobility and legislate with an eye toward the root causes of inequality, rather than the symptoms.