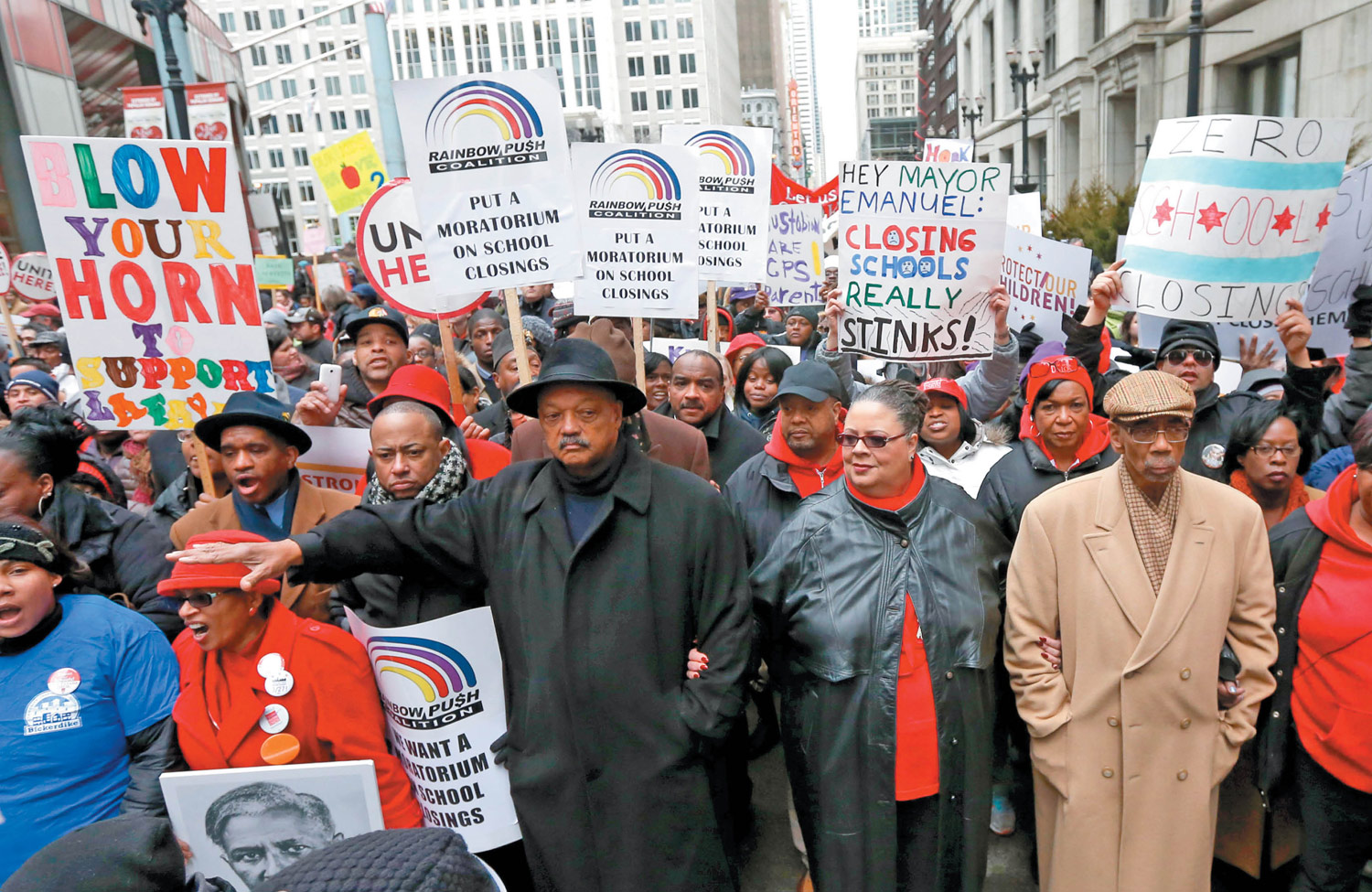 It has long been a central claim of those who call themselves school reformers that they are civil-rights crusaders challenging the status quo—as embodied by intransigent unions and bloated education bureaucracies—on behalf of people of color. The reform playbook has frequently included measures such as “parent trigger” bills that promise to empower parents in low-income minority communities over teachers and administrators at failing schools. Understandably, many parents grappling with inferior schools were initially intrigued by the promise of market reform. Decades of frustration gave way to the hope that “radical reform” might finally produce something better for their children.

But evidence of the reformers’ broken promises has quickly accumulated. In the past five years, more and more parents of color have come to realize that school closings do not yield school improvement; that over-testing steals instructional time; and that charter schools do not generally outperform local schools even though they under-enroll students in need of special-education services, extremely poor youth and English-language learners. Shuttering neighborhood schools and dispersing their students, meanwhile, severs the links between communities and local schools, and redistributes real estate, contracts and public funds away from poor communities and into private pockets.

Parents and community activists have also come to see that teachers unions are not the obstacle to poor children’s progress depicted in the reform movement’s caricatures. The unions, for their part, have evolved, recognizing that their strained alliances with communities were a source of weakness that antiunion reformers have deftly exploited—and that these links must be repaired if a grassroots movement for educational justice is to have a chance at defeating neoliberal reform.

Ever since the union clashed with local parents and activists in the Ocean Hill–Brownsville neighborhood of New York City in 1968, the struggle for equitable, community-based public education has been contested over the fault lines of race and class. And policy tensions between parents and unions persist. Clearly, teachers unions are dedicated to preserving and extending job security and teacher due process through the tenure system. Pro-labor parents groups and largely poor communities of color, on the other hand, are often torn between the need to assure a quality education to each and every child and an insistence on an equitable decision-making process for underperforming teachers. Zakiyah Ansari, a parent activist and advocacy director for the Alliance for Quality Education (AQE) in New York City and an organizer for the national Journey for Justice, says: “Labor can be threatened when we claim an independent identity as parents…. We do have differences, but they are getting smaller.”

That relations are improving is thanks in part to the way teachers unions have broadened their vision. The Chicago Teachers Union and its leader, Karen Lewis, have modeled a new breed of union leadership by responding to privatization aggressively and reimagining public education collaboratively. When the CTU struck in September 2012, its agenda focused not just on teacher benefits and wages, but on quality education—“the schools our children deserve,” including a decrease in high-stakes testing, smaller class sizes and paid prep time. As a result, the strike won significant support from parents and community allies. Lewis notes, “Across the city, more and more people trust CTU. We stand up for the little guy. CTU was not about narrow self-interest during the strike, and now we are fighting for what will make a difference for our community and the child.”

As similar alliances have emerged across the country, giving the movement for educational justice a shot of grassroots momentum, unions have not only changed their rhetoric—moving beyond narrow issues of job security and wages toward broader social-justice concerns—but have actually embraced a new set of goals and demands arising out of their collaborative relationship with communities.

Bob Peterson, president of the Milwaukee Teachers Education Association, has cultivated alliances with the local NAACP, immigrant groups and other unions to fight for participatory school redesign rather than closings, as well as fair funding, smaller class sizes, immigrant rights, raising the minimum wage and strategic investment in public schools. In Pennsylvania, the Philadelphia Federation of Teachers and its president, Jerry Jordan, joined with neighborhood parent leaders, allied unions and youth organizers to create the Philadelphia Coalition Advocating for Public Schools (PCAPS), which urges a moratorium on school closings, fair and equitable school funding, charter-school accountability and building a vision for community schools.

Perhaps the most inspiring story of collaboration has come out of Minnesota. The St. Paul Federation of Teachers invited the community to join union members in shaping a platform of issues for contract negotiations—including classroom ratios, pre-K education and student health services. These demands were approved by the teachers union, featured in a campaign and made the basis for a strike threat. The local’s then-president, Mary Cathryn Ricker (now an American Federation of Teachers executive vice president), said: “What we are working on is how we can bargain contracts that benefit the larger community good…. We can’t separate our work, our contracts, from community hope. If we do, we are back to square one.” Karen Lewis took note, saying recently, “Right now I am interested in what St. Paul is doing. I think that is a next step for us.”

In the spring of 2013, a number of national organizations with historic commitments to public education turned their attention to coordinating and scaling up these emergent, scattered movements through the national Alliance to Reclaim Our Schools. The unions were there at the table with community groups—the AFT, the NEA and the SEIU, along with the Alliance for Educational Justice, the Center for Popular Democracy, the Gamaliel Network, Journey for Justice, the National Opportunity to Learn Campaign and the Annenberg Institute for School Reform. The AFT’s Randi Weingarten explains, “We now understand that our future as a union is linked with communities trying to build a quality education. This has to be the core work of the union. So we are directing AFT organizing and other resources to these campaigns, because we see it as our most important but difficult work.”

The elements of a platform were sketched in town-hall meetings in a dozen cities and then refined at an October 2013 conference in Los Angeles, co-sponsored by the AFT, the NEA, the Schott Foundation for Public Education and Communities for Public Education Reform. The alliance committed itself to a set of goals emanating from communities: full funding and support for neighborhood-based schools; quality affordable K–16 education (including for undocumented students); reduction in testing; an end to zero-tolerance policies; and a living wage that lifts people out of poverty. The platform was endorsed by over 150 organizations.

Last winter, a December 9 Day of Action organized rallies in more than 100 communities to reclaim public education as the gateway to racial and economic justice. On May 17, the alliance celebrated the sixtieth anniversary of Brown v. Board of Education to rally support for “the schools our children deserve.”

While the mainstream media have focused primarily on the union funding and leadership for these rallies, the alliance represents deep, deliberate, energizing and often difficult coalition work within and across communities. Secky Fascione, director of organizing at the NEA, explains: “The coalitions have gone to scale. AFT, NEA, Schott, Journey for Justice and youth-organizing groups are represented and have generated a platform and campaign for educational justice that emerges from communities with shared commitments.”

The challenges in sustaining this coalition are daunting. Most obviously, corporate reformers enjoy deep pockets and remarkably cooperative media and political allies, who are eager to help them foment schisms between parents, teachers and unions. While attacking bad teachers and public schools as singularly responsible for low student test scores, they downplay the impact of inequality, poverty, racism and a lack of resources on academic outcomes. President Obama, Education Secretary Arne Duncan and many Democrats have played a disturbing role by favoring an initially Republican—but now bipartisan—policy agenda to bring free-market principles to public education. Most recently, Obama administration officials, including Duncan, expressed support for the Vergara court decision, which concluded that teacher tenure violates the rights of low-income children.

In contrast to the corporate wealth and political capital that scaffolds the neoliberal reform movement, philanthropic support for community organizing has been declining. Cassie Schwerner of the Schott Foundation describes this as a serious challenge. “Within the coalition, the unions have most of the money. They have been very generous, but community groups need support—they need staff, infrastructure and resources.” For example, Communities for Public Education Reform, a national donor collaborative dedicated to educational-justice organizing, has funneled more than $34 million into the field over eight years—supporting 140 grassroots groups—by partnering with seventy-six donors. Housed at Public Interest Projects, CPER will soon be closing its doors due to a lack of resources.

Despite the enormous imbalance in financial resources, the desire for community-controlled public education seems to be winning hearts, minds and elections, as the recent mayoral victories of Bill de Blasio in New York and Ras Baraka in Newark attest. Karen Lewis has just filed papers in a first step to challenge Rahm Emanuel, a proponent and chief architect of corporate education reform, in the Chicago mayor’s race. And there are promising signs of new progressive voices emerging within the national Democratic Party. Donna Brazile, a former campaign manager for Bill Clinton, recently announced the formation of Democrats for Public Education, which will challenge the neoliberal Democrats for Education Reform and contest the claims of the neoliberal reformers.

Though the coalitions between parents and teachers have been crucial to this progress, questions remain. Ansari voices a suspicion that lingers in communities of color: “We are challenged by the sustainability of this work. How long will labor support us? Will they move to more comfortable places and withdraw if the crisis fades even a bit? Is labor in this for the long haul? Time will tell.” Ultimately, however, as Karen Lewis notes, such labor-community coalitions must grow if they are to prevail in the broader fight: “It is the only way we can even begin to think about facing down and beating the enemy that would take everything from us.”