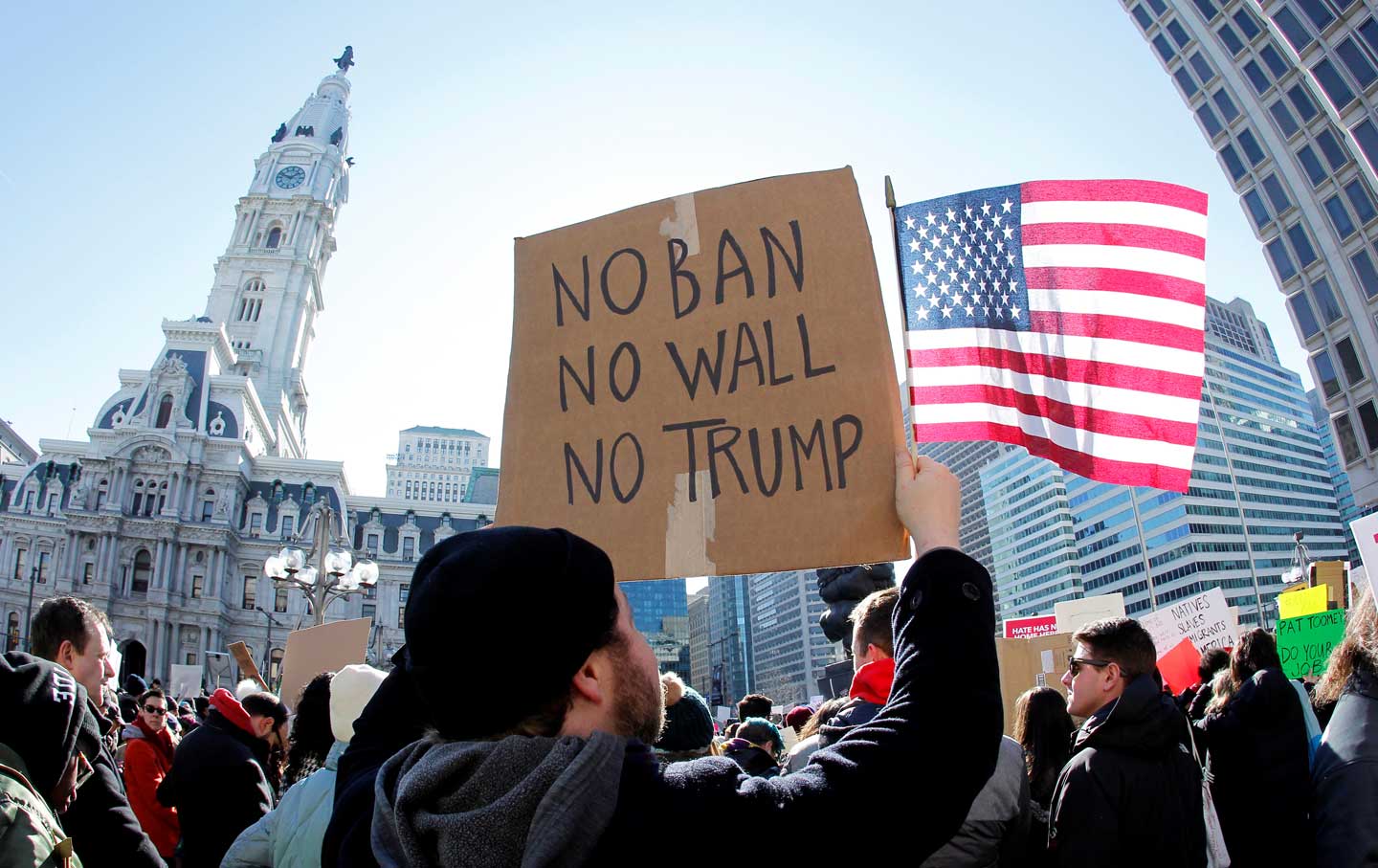 Since President Trump issued his “Muslim ban” executive order, the country has been rocked by a cascade of political chaos, and now a critical legal battle that could soon reach the Supreme Court. But another, less visible crisis is unfolding in communities around the country, where global refugee diasporas have put down roots. For those set to arrive from the seven majority-Muslim nations targeted by the ban, Trump’s blatantly discriminatory decree represents an overarching challenge surrounding his election: how to bridge the divides of ideology and cultural difference in an insecure world.

While the various court challenges to the ban move ahead, refugee lives hang in the balance in Lancaster, Pennsylvania. In this city, hundreds of migrants have resettled after escaping war and persecution around the world. And as with many other resettlement communities nationwide, many see a reflection of their own fates in the new refugees who were due to arrive before the ban abruptly blocked their path.

Mustafa Nuur, a local advocate for the Somali community, has watched warily as the border he crossed as a refugee two years ago now hovers half-open. “Singling out people like that, it goes against what I’m sure every American knows this country stands for, which is a country for immigrants and for all people,” he says.

Since resettling in Pennsylania, Nuur has journeyed a world away from his childhood in exile. He spent part of his youth warehoused in the sprawling Dadaab refugee camp where 260,000 wait in limbo for a permanent home—before migrating to Nairobi, where he attended a volunteer-run ad hoc migrant school and sold bottled water on the street to support his family.

“Over there,” Nuur recalls, “[child labor is] a necessity…. You’re always feeling unsafe and feeling like something horrible is going to happen, because you’re just a few miles away from the countries that you just fled.”

Nuur is now training with a job-development program, working with other local refugees at a local software-development firm. He thinks about fellow refugees who’ve been forced to return to Dadaab, some after selling their belongings and giving up their camp spaces: “When you know that you spent almost a decade [trying to migrate] and you’re going to go to a country that didn’t want you to be there or a country that banned you, that’s very discouraging.”

While Nuur has advised fellow refugees to stay vigilant, the social-service organization that has supported his community over the years, Church World Service (CWS), is scrambling to resume the processing of its scheduled arrivals, including refugees who are not linked to the targeted Muslim-majority countries. For a place that prides itself on exemplifying an American tradition of sanctuary, the ban represents the profound loss of a social investment that has brought cultural vibrancy to the wider community.

“At a time when we’re in this grave global crisis, now the US has just shut its doors,” says CWS Community Resources Director Stephanie Gromek, who works with federal officials to manage resettlement cases. The agency resettled 286 refugees in 2015, mostly from Asia, Africa, and the Middle East, including many from the group of “banned” countries. About 40 percent are children.

At the same time, Gromek says the public backlash, demonstrated by the nationwide protests, “may be the saving grace to all of this that I hope that the global community is seeing…the rest of the country is standing up and saying no. This is not who we are,” a country with a tradition “of opening our doors, opening our borders to the world’s most vulnerable people.”

Nuur noted that one refugee who landed just weeks ago saw some of her relatives, who were scheduled to arrive shortly after her, turned back from the airport. “She was really devastated,” Nuur recalled. He now fears any further snag in the resettlement process as a result of the executive order could “potentially set them back at least two to three years right now. So I think the damage has really been done on [those] cases.”

Trump’s executive orders have no historical precedent, but do continue a pernicious legacy of refugee and humanitarian policies’ being entangled with geopolitics. Prior to World War II, Jews fleeing from Nazi Europe were sent back to their deaths after being refused humanitarian admission by US authorities. After the war, which saw the establishment of humanitarian conventions protecting the right of asylum for refugees suffering war and persecution, the United States carefully curated its admissions, allowing in, for example, Hungarian refugees of Stalin’s crackdown on dissidents, while imposing bans on suspected Communists, or admitting Cuban boat people while shutting out Haitians fleeing poverty and persecution. Now that the hard right has captured the White House, Trump has shown himself willing to swing the gates shut even more brazenly. And in another historical turn, the global signal from the White House is emboldening right-wing insurgent movements across Europe, which are similarly blocking asylum seekers in the name of “national security,” and undertaking parallel crackdowns on undocumented migrants within their borders.

Trump’s Muslim ban has received support from many Americans, according to opinion polls, Gromek acknowledges. But in her view, “Fear has played into this whole thing.” Although refugees have “been painted in this terroristic picture,” in Lancaster advocates work to “show people face-to-face who these refugees are and to hear their stories and really understand where they’re coming from, and that they’re in fact fleeing the exact nightmare that we’re afraid of.”

Nuur’s experience affirms how proximity fosters solidarity. “We don’t judge a country by its politicians but…by its everyday people.” He’s pessimistic about the Trump administration’s willingness to flout the courts, but maintains, “As a human being you should always just give people some chances…there’s plenty of time [for him] to undo what he did.” After all, “He’s a father and he has children. And I would want him to imagine all the refugee children that would be affected by his decision making.”

Nuur knows such an unpredictable political moment can offer despair or optimism: “Hope is a beautiful thing, and for refugees—that’s the biggest thing you can have. When you have hope you can try to make it to the next day, and the next day. But some of the actions he did right now, it’s taking away people’s hope, which I think is the last thing a refugee needs to lose.”