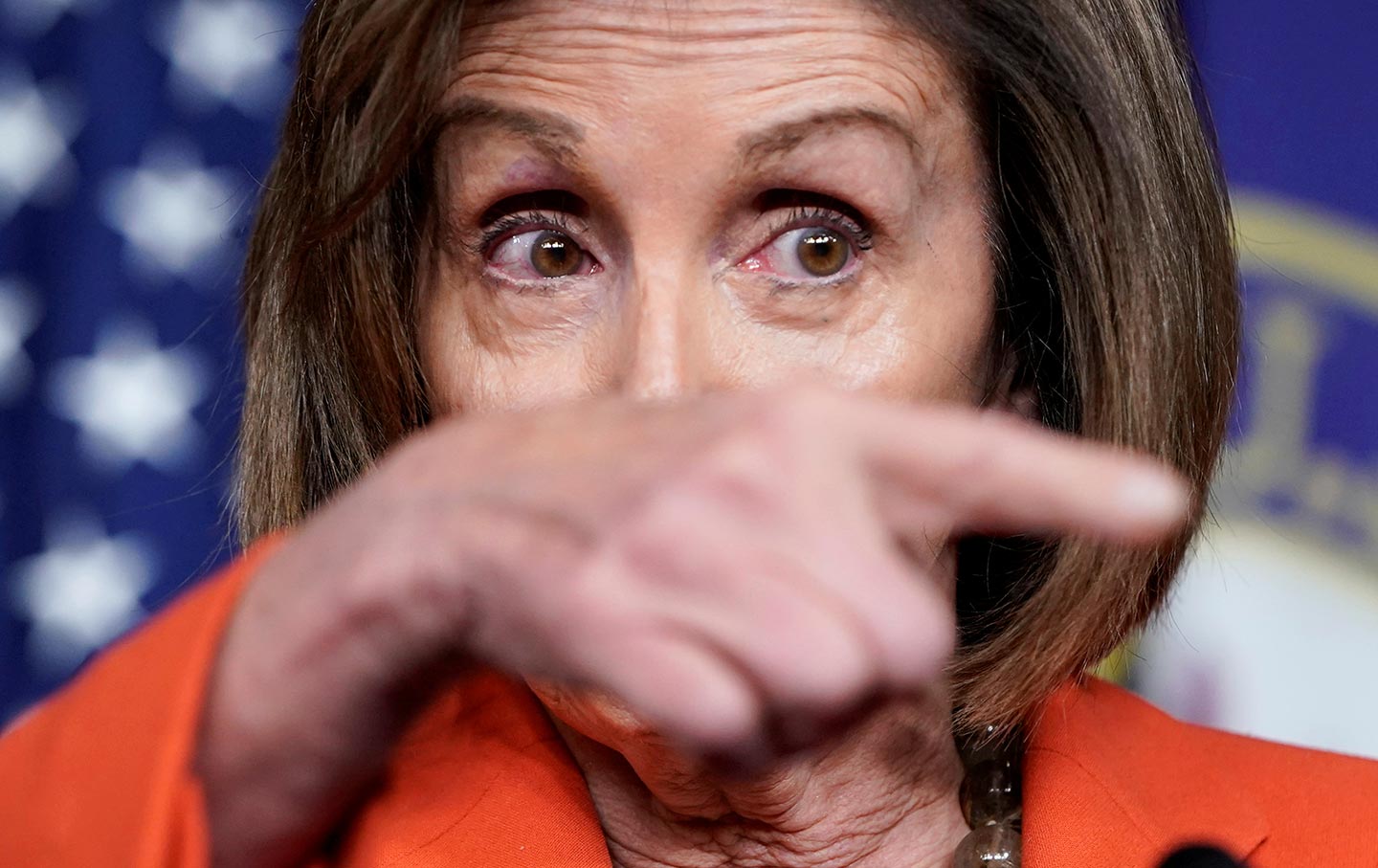 Nancy Pelosi speaks during a media briefing ahead of a House vote authorizing an impeachment inquiry into President Trump. (Reuters / Joshua Roberts)

As Joe Biden fades, it increasingly looks likely that the next Democratic presidential nominee will be a strong progressive. Bernie Sanders and Elizabeth Warren both remain robust in polls—especially in the early states. A Siena College/New York Times poll of Iowa has Warren at 22 percent, Sanders at 19 percent, and Pete Buttigieg at 18 percent. A CNN poll of New Hampshire has Sanders at 21 percent, Warren at 19 percent, and Biden at 15 percent. Well-positioned to dominate the early states, Sanders and Warren also have an enormous fund-raising advantage over Biden, their chief competitor. They’ve shown an ability to build a multiracial coalition that has so far eluded Buttigieg. Both Sanders and Warren have a clearer path to victory than their rivals.

But even if Sanders or Warren wins the nomination and eventually the presidency, they’ll have to confront a problem nearly as large as Republican opposition: the open hostility of establishment Democrats. Nancy Pelosi, America’s most powerful elected Democrat, made clear in an interview with Bloomberg on Friday that she has little use for the party’s swing to the left, saying, “What works in San Francisco does not necessarily work in Michigan.”

“Remember November,” Pelosi insisted. “You must win the Electoral College.” On health care, Pelosi was more set on defending past gains than on pushing forward. “Protect the Affordable Care Act,” she argued. “I think that’s the path to health care for all Americans.” She claimed that “the Affordable Care Act is a better benefit than Medicare.” Pelosi was equally dismissive of the Green New Deal: “There’s very strong opposition on the labor side to the Green New Deal because it’s like 10 years, no more fossil fuel.”

In policy terms, Pelosi insisted that she would maintain pay-as-you-play rules, which would hamstring any effort to borrow money to pay for new spending. Pelosi is adamant that “we cannot just keep increasing the debt.”

In setting environmentalism against jobs as well as using the deficit to set limits on future spending, Pelosi sounds more like a Republican than a Democrat. Simply in policy terms, Pelosi’s allergy to debt is wrongheaded. Interest rates are at a historic low. The United States is woefully in need of infrastructure spending, including for adaptation to climate change. Since she’s likely to continue to be House speaker whoever wins in 2020, Pelosi will be better situated to sabotage a progressive administration than anyone in the GOP.

Sanders and Warren will have to be as prepared to challenge Pelosi as to take on Donald Trump, both in the primaries and, if either gets that far, during the next Democratic presidency.

One argument they can make is that Pelosi is simply wrong about what candidates and ideas are popular in swing states. Pelosi specifically cited Michigan, which Hillary Clinton lost in 2016. A recent Emerson poll makes clear that the candidate who does best in a head-to-head match against Trump is Sanders. According to the poll, Sanders would get 57 percent to 43 percent, while Biden would get 56 percent to 44 percent and Warren would get 54 percent to 46 percent. In other words, all the three top Democrats would do well against Trump, and there is no liability for Sanders in running as a democratic socialist. Contra Pelosi, what plays in San Francisco is also doing just fine in Michigan.

The Green New Deal is popular with the very voters Pelosi claims to be most concerned about—those who live in swing districts. As Vox reported in September, “Progressive think tank Data for Progress and YouGov recently surveyed 1,033 voters in 42 swing House districts across the country; their poll found 49 per cent of voters support the Green New Deal, even after being told it would include a large amount of government spending. The poll found 36 per cent of voters oppose it.”

As so often, Pelosi is using electability arguments to hide what are deeper divisions of worldview. The divide between progressive presidential hopefuls and Pelosi isn’t just about ideology but also about funding models. Sanders has pioneered a small-donor model, which eschews corporate donations. Warren, to date, has been following Sanders, although it remains to be seen whether as a presidential candidate she’ll be able to resist accepting the help of corporate-funded PACs.

Pelosi is the polar opposite. Her political success rests not only on her legendary prowess in herding congressional Democrats but also on her ability to raise funds. As Ryan Grim notes in We Got People (2019), his survey of the contemporary Democratic Party, “Nancy Pelosi, Steny Hoyer, Rahm Emanuel, and a generation of party leaders were all shaped in their formative years by the pivot toward corporate dollars in the 1980s.” Grim also observes that Pelosi’s “focus on big money contained the seeds of her own political drift away from the left—or, perhaps more accurately, as the left developed a sophisticated critique of money and politics and set about building an alternative funding infrastructure, Pelosi stayed moored to big money, knowing no other way of doing it.”

Any left-wing President will have to deal with the Pelosi problem: the existence of powerful Democrats who are too wedded to big money to accept an ambitious program. In an interview with CNBC, Sanders was asked if conservative Democrats like West Virginia Senator Joe Manchin were going support his program. Sanders replied, “Damn right they will. You know why? We’re going to go to West Virginia.” Sanders promised to hold rallies in West Virginia to pressure Manchin.

In effect, Sanders was arguing for the same model that Trump has used to browbeat recalcitrant Republicans into supporting him: using the bully pulpit of the presidency to strong-arm his own party. Trump has repeatedly insulted Republican lawmakers and threatened to support their primary opponents if they cross him. Through tweets and rallies in Republican states, Trump has made himself the dominant voice of the party, the leader other Republicans don’t dare cross.

In Trump’s case, presidential bullying has yielded limited results. The congressional GOP under Trump has shifted on a few policy issues, mainly immigration and trade. Trump’s hectoring has been mainly effective in getting the GOP to indulge his own corruption. Anyone who opposes Trump, be it Justin Amash or Mark Sanford, soon finds themselves out of the party.

Sanders’s gamble is that what Trump has done ham-fistedly for corrupt reasons can be done well for a progressive agenda. It’s an open question whether Warren or Sanders will be able to cow the Democratic establishment. But that’s clearly what they have to do. If a progressive bests Trump in 2020, one of the first things they’ll have to do is tell Pelosi she needs to get on board with the program or risk a president’s supporting her ouster.

Defeating the Republicans will be the easy part. The real challenge will be overriding Pelosi’s veto.