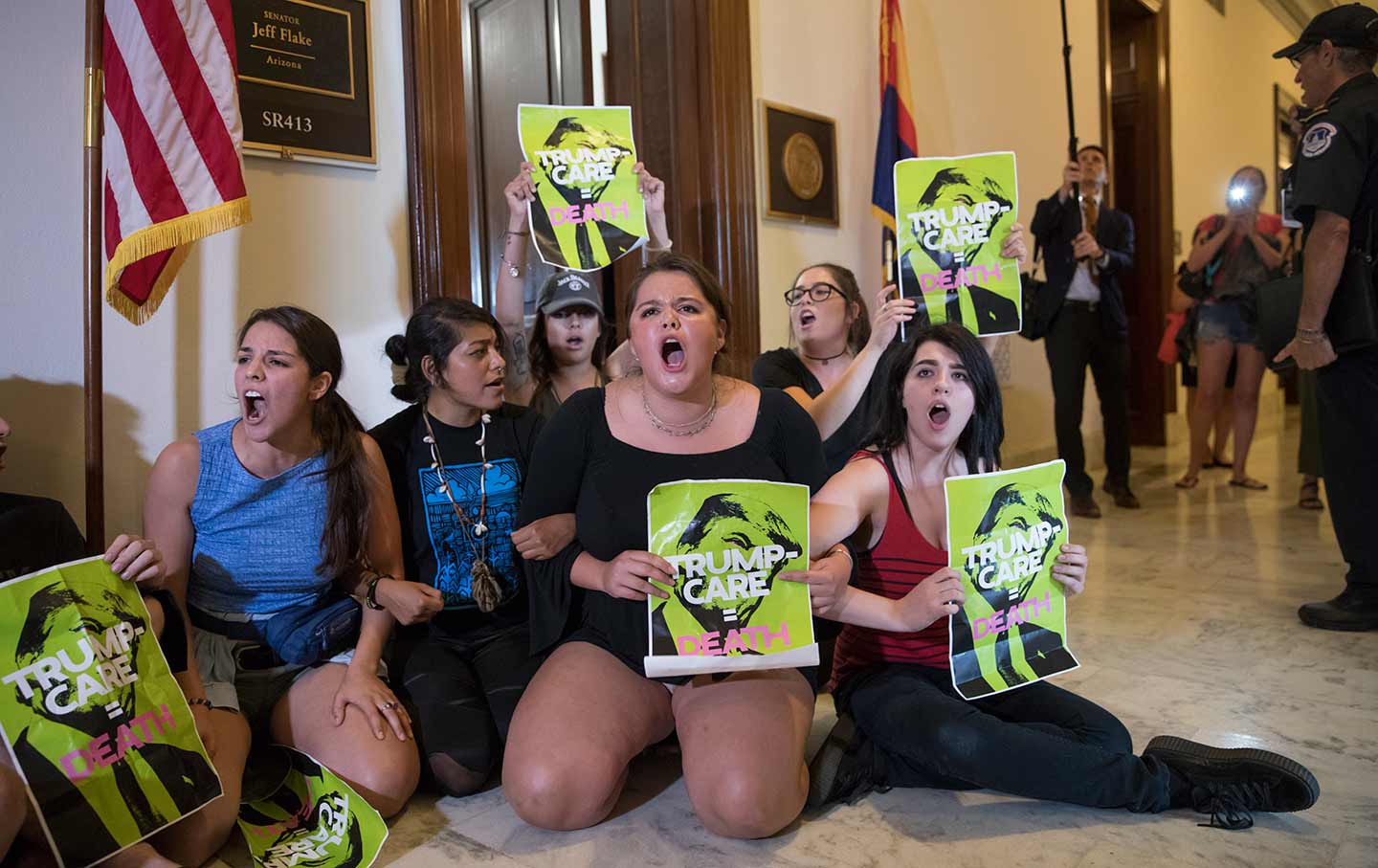 The ground is slowly softening across the country for a different kind of health-insurance system. Signs are emerging everywhere, from well-known public figures to ordinary Americans voicing their anger at town halls to newspaper editorials like one just published in the Oneonta (New York) Daily Star arguing for a “single-payer universal health care system.”

We’re having a conversation in America now that we wouldn’t have had five years ago, says former Health and Human Services secretary Kathleen Sebelius, who shepherded the Affordable Care Act through passage to its disastrous rollout in 2013. “People now say insurance companies shouldn’t ever again be allowed to discriminate against individuals with preexisting health conditions. There is some recognition that health care for all is a positive step forward and shouldn’t be just available depending on where you work or where you live.”

Town-hall meetings suggest the same. Lydia Tackett, an educator in her early 30s from Fargo, North Dakota, told attendees at a recent roundtable with North Dakota Senator John Hoeven that she had seen a “sea change” among her peers in their perceptions of health insurance. While young adults may have considered it unimportant in the past, she said, mandating coverage may now have more support than the GOP believes. Fifty-eight-year-old Cheryl Hofstetter Duffy made it clear at a Kansas town hall that she “would not support” GOP Senator Jerry Moran if he voted to repeal Obamacare. “Oh, it is that critical,” she said.

The latest polls show that a majority of Americans now support getting insurance from a single government plan.

The Kaiser Family Foundation’s June tracking poll found that a majority of Americans now support getting insurance from a single government plan, indicating a slow but steady increase in support since 1998, with 53 percent now favoring a single-payer plan while 43 percent are opposed. It was roughly the opposite from 1998 through 2004, while polling from 2008 to 2009 found that the public was more evenly split.

Still, the Kaiser poll revealed that the public’s opinions “are quite malleable,” meaning people can easily be persuaded not only by the usual arguments from doctors, hospitals, drug companies, and other sellers who fear a national health plan would mean they’d make less money. They might also be influenced by ideologically driven politicians who speak on behalf of those interests. “If we don’t get this done and we end up with Democratic majorities in ’18, we’ll have single-payer. That’s what we’ll be dealing with,” South Dakota Senator John Thune told Politico.

All this calls for a new way to talk about a national health system. A Kaiser poll conducted in 2016 found that the public was more likely to react favorably to the term “Medicare for all” than to “single payer.” The latest poll showed that support was similar no matter which term was used.

“Single-payer” is a shop-worn phrase from previous battles that hardly describes all national health systems.

The term “single payer,” a shopworn phrase with negative overtones resulting from past health-care wars, needs to be replaced. After all, it hardly describes all national health systems. As T.R. Reid pointed out in his 2009 book, The Healing of America: A Gobal Quest for Better, Cheaper and Fairer Health Care, other countries have national systems that cover everyone but are not necessarily single-payer plans. There may be multiple payers, although the government controls the purse. “Medicare for all” is also a better phrase because Medicare is a popular social program. On the other hand, what does it mean to people in their 20s or 30s? Many people on Medicare don’t even know what it means. How are 35-year-olds going to understand Medicare’s complicated inner workings and relate them to their own health-care needs? Using “Medicare for all” could still be a tough sales job.

We should fight for a system that provides for all citizens, regardless of the financing or billing details.

The way health insurance works now in America is that younger people pay less for their coverage because the likelihood of illness is lower. Older people pay more because they are generally sicker and use more medical services. So insurance is most affordable when people don’t need to use it, and most expensive when they do. That principle is enshrined in the Affordable Care Act and is currently a contentious point in the Republicans’ repeal-and-replace plan.

It’s also behind a lot of those media stories featuring anecdotes from 60-year-old women complaining that they have to pay for maternity coverage when they will never become pregnant. The stories never mention that the 60-year-old may need eye surgery or cancer treatment. In foreign systems, there’s a lot of cross-subsidization going on, and no one I’ve ever interviewed in another country talks about their health systems in such narrow, self-interested terms as Americans do. With guaranteed lifetime coverage for all, everyone is in the risk pool—young and old, sick and well, rich and poor. The premiums or taxes from 60-year-olds help pay for the 30-year-old’s maternity care, and contributions from thirtysomethings finance the 60-year-old’s eye surgery.

Changing the narrative won’t be easy. Americans don’t want their money used to pay for someone else’s insurance, although that kind of cross-subsidization is central to Medicare, a point that has never been made clear to beneficiaries or the general public. Reid says that when he was speaking on behalf of Colorado’s single-payer initiative last fall, he mentioned to one audience that if his neighbor was in pain or needed care, he would help. A woman stood up and shouted, “Not my responsibility!” Half the people cheered. When Reid told the group that he was his brother’s keeper, the other half cheered. “That’s the split in the state. Half don’t want to pay for other people’s health care,” he said.

I’ve heard that argument for years. But bringing the other half along is crucial if the United States is ever going to fix our broken health-insurance system. Earlier this year, New York Times columnist David Leonhardt wrote that fighting for change “will take time and involve setbacks.” But those fighting to change the system “are likely to succeed in the long run.” That will mean changing the discourse around health insurance. Shifting the language to “guaranteed lifetime coverage for all” can’t help but push that change along.