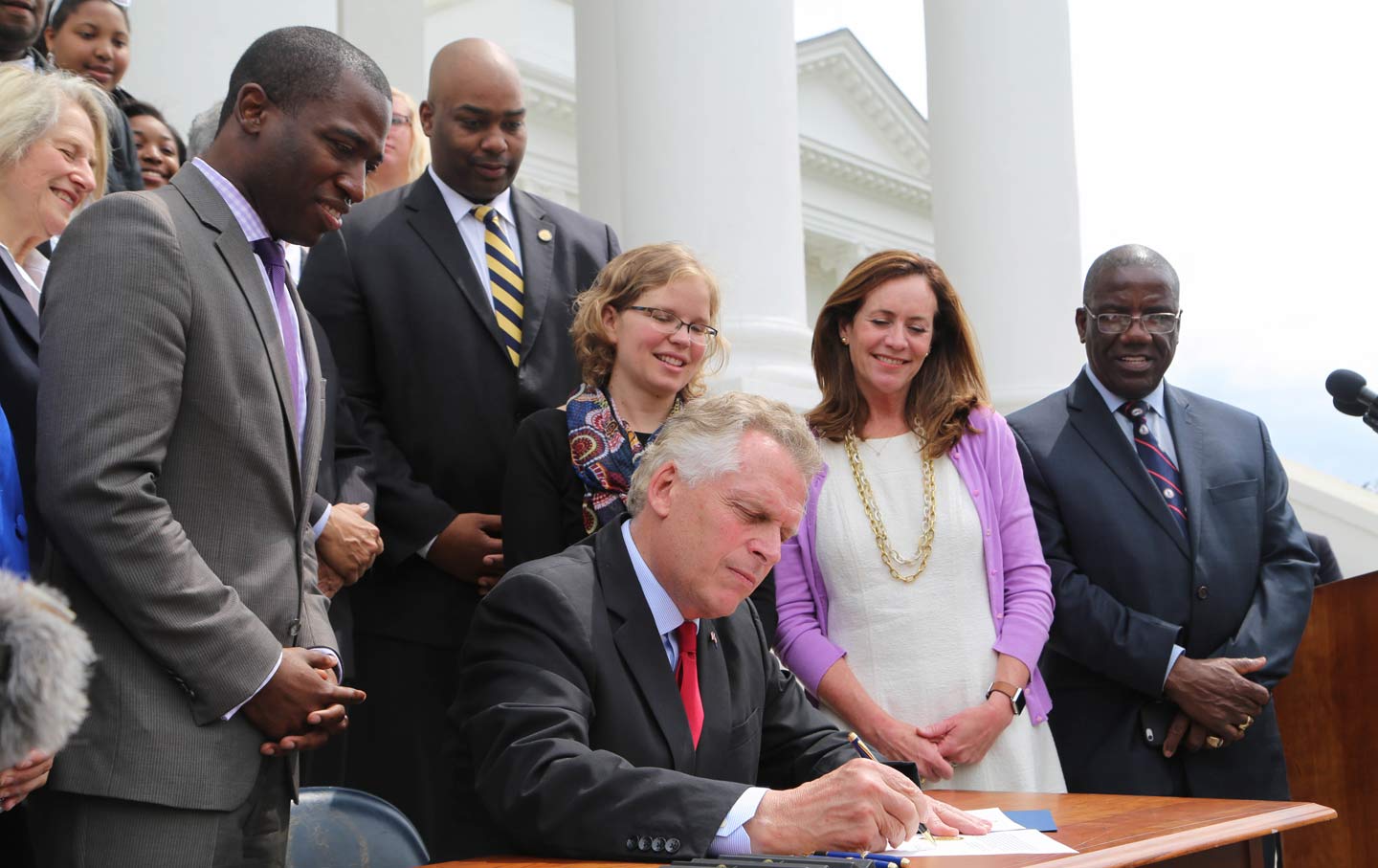 The policy will immediately restore the right to vote—as well as the right to run for public office, serve on a jury or become a notary public—to 206,000 Virginians who have served their time and completed their parole or probation, according to a press release.

Virginia was one of only three states, along with Iowa and Florida, that permanently stripped felons of their right to vote. Virginia did have a process that allowed felons to apply to have their rights restored, but it was an onerous one. According to the the Sentencing Project, Virginia was also one of three states, along with Florida and Kentucky, where 20 percent or more of black adults are disenfranchised. Jeremy Haile, federal advocacy counsel for the Sentencing Project, tells The Nation that Friday’s move “is the most significant restoration of voting rights that we have ever seen. We see it as a model for other states.”

“We have a horrible history here in Virginia,” McAuliffe told The Nation. “Today I announced this action on the steps of our capitol, where in 1901 and 1902 they put literacy tests, the poll tax and then disenfranchisement of felons into the state’s constitution. We were one of the worst states in the United States of America on this issue. So we got rid of over 100 years of sad history denying people the right to vote in the Commonwealth of Virginia.”

McAuliffe had already made some smaller moves to restore felons voting rights, reducing waiting times for violent felons to petition to have their rights restored, eliminating a requirement that individuals pay all of their court costs before they’re eligible and reclassifying everyone convicted on drug charges as non-violent felons. “We got 18,000 people back into the system,” says McAuliffe, “but as I got into the issue, I wondered why these people had to go through this process. These people have served their time, they’re done with their probation, they’re back with their families and their communities, they’re working—why do we put these barriers around the voting box and make them jump through a bunch of hoops? If we’re giving people back their rights, then let’s just go ahead and do it.”

The United States has around 5 percent of the world’s population but houses around 25 percent of its prisoners. According to The Sentencing Project, almost six million Americans are prohibited from voting because of felony disenfranchisement laws. That represents around one out of every 40 voting-age adults. Nationwide, 75 percent of them have served their time and are out of prison.

While laws stripping felons of citizenship rights date back to ancient Rome, in the United States, they’ve been inextricably tied to racism and white supremacy. As Brent Staples reported for The New York Times, there was a massive expansion of these laws in the post–Civil War South, “when Southern lawmakers were working feverishly to neutralize the black electorate.” According to Staples, “Poll taxes, literacy tests, grandfather clauses and cross burnings were effective weapons in this campaign. But statutes that allowed correctional systems to arbitrarily and permanently strip large numbers of people of the right to vote were a particularly potent tool in the campaign to undercut African-American political power.”

Prior to the launch of the War on Drugs in the 1980s, a majority of prisoners held in state and federal prisons were white, but a 2004 study by scholars at the University of Minnesota found that, between 1850 and 2002, “states with larger proportions of nonwhites in their prison populations were more likely to pass [disenfranchisement] laws, even after statistically controlling for the effects of time, region, economic competition between whites and blacks, partisan control of government, and punitiveness.”

Today, 30 years after the drug war made people of color the majority in America’s prisons, African Americans are four times more likely to be stripped of their voting rights than the population as a whole, according to the Sentencing Project.

The issue has gained greater attention in recent years, in part because of an increased focus on racial biases in the criminal justice system and its impact on communities of color. In some cases, there’s been bipartisan support for reform—Wyoming’s Republican legislature restored the franchise to nonviolent felons last year, and a number of states have streamlined their processes for ex-felons to apply to have their rights restored.

But more often, the issue has been caught up in partisan wrangling. In 2012, South Carolina’s Republican legislature stripped voting rights from people on probation—it had previously disenfranchised only those behind bars or on parole. When Kentucky elected Matt Bevin as its governor last year, one of his first acts in office was to rescind his Democratic predecessor’s executive order restoring felons’ voting rights. And earlier this year, the Maryland legislature had to override two vetoes by Republican Governor Larry Hogan in order to reform that state’s felon disenfranchisement law.

Virginia’s reform highlights the critical importance of state-level politics. In 2013, McAuliffe defeated Ken Cuccinelli, dubbed “the Attorney General of the Tea Party” by People for the American Way, in a squeaker. Cuccinelli had opposed Virginia’s inclusion under Section Five of the voting Rights Act, which, prior to being overturned by the Supreme Court, required states to submit new voting laws for review, claiming that Virginia had outgrown the need for it, and comparing it to a child “running to mommy” for help. In just the past few weeks, McAuliffe also vetoed a bill that would protect people who discriminate against gays and lesbians, and another defunding Planned Parenthood.

Asked about the inevitable blowback from Virginia Republicans, McAuliffe says, “I had the legal power to do this, it’s in the state Constitution and the legislature can’t do anything about it. But more importantly, morally, it was the right thing to do.”