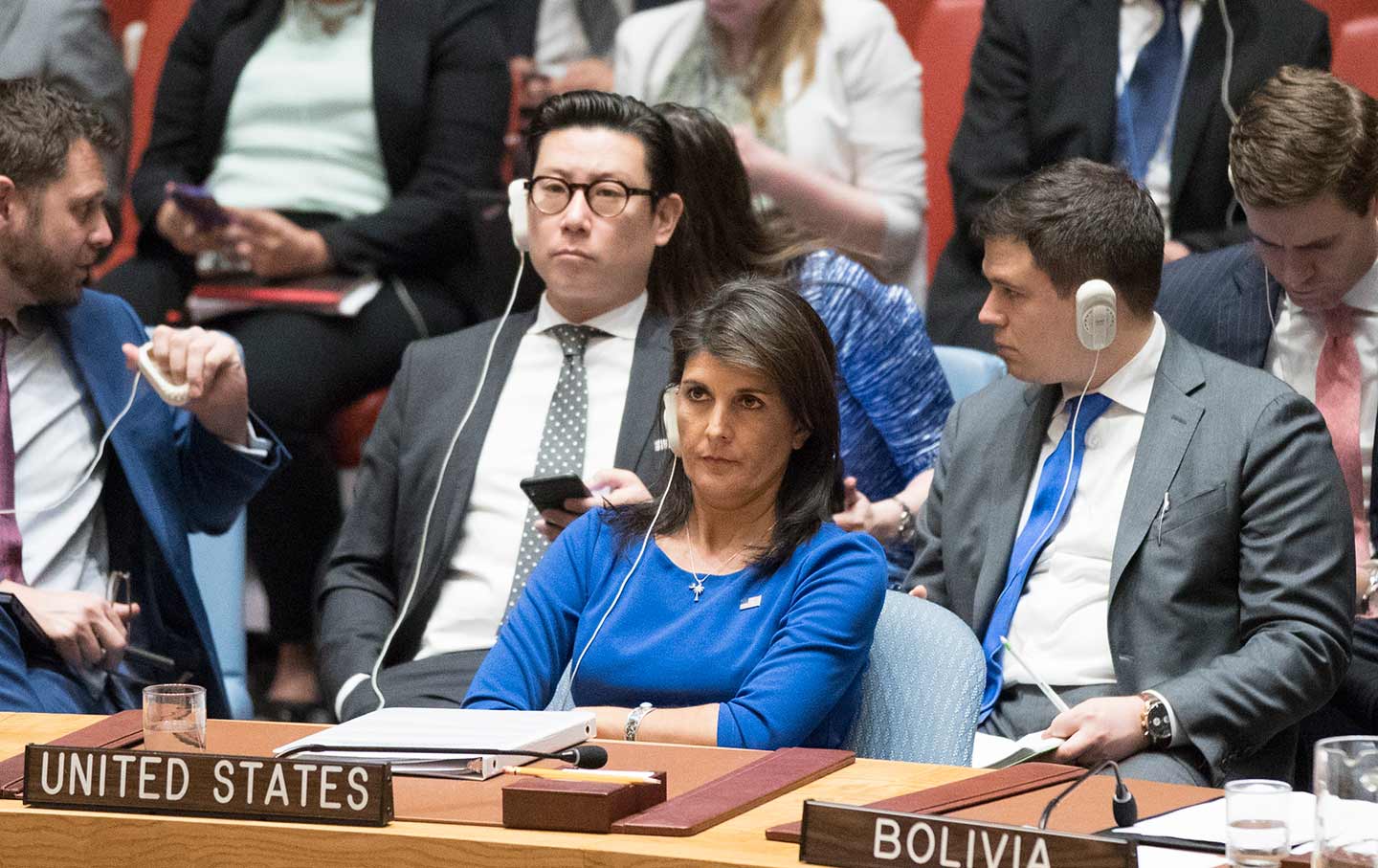 Nikki Haley listens to the Syrian Ambassador to the UN following a vote on a draft resolution on chemical-weapons attacks, April 14, 2018. (AP Photo / Mary Altaffer)

On July 13, after more than a year of negotiations, United Nations member governments agreed on a plan to tackle the nightmare of uncontrolled global migration in an organized and humane way. It wasn’t easy to bring everyone on board, but, in the end, 192 nations concurred: There had to be concerted action.

The UN, however, has 193 member countries.

While the rest of the world moves toward formalizing and implementing the ambitious if clumsily named Global Compact for Safe, Orderly, and Regular Migration, the United States has laid claim to a position as a UN outlier.

As July draws to a close, the message from the UN seems clear: The world will go ahead as best it can without the United States. And there are indications that this is becoming an international trend.

In June, UN member nations began to respond institutionally to the Trump administration’s disengagement and criticisms. The United States has held a seat on the UN Human Rights Committee—a standing group of independent experts established to monitor adherence to the 1966 International Covenant on Civil and Political Rights—since 1995. With the four-year term of the current representative, Columbia Law School professor Sarah Cleveland, set to expire at the end of the year, the Trump administration nominated conservative lawyer Pierre-Richard Prosper, who served as President George W. Bush’s ambassador-at-large for war crimes, to take her place. With nine seats to be filled, the committee voted in representatives from Albania, Chile, France, Greece, Guyana, Japan, Slovenia, Tunisia, and Uganda. Prosper, the US nominee, was rejected.

Felice Gaer, director of the Jacob Blaustein Institute for the Advancement of Human Rights and vice chair of the UN Committee Against Torture, said in an e-mail that this was “a first-ever defeat of a US candidate for the UN Human Rights Committee.”

On June 29, the Trump administration’s choice to lead the International Organization for Migration, Ken Isaacs, was decisively defeated. The IOM, based in Geneva, is a decades-old leader in refugee resettlement that became an official part of the UN system in 2016. With help from other UN agencies, it is largely managing the UN response to the Rohingya refugee crisis in Bangladesh, and will direct the implementation of the global migration compact after it gets final approval by UN member states in December. Its leadership job went to a Portuguese politician, António Manuel de Carvalho Ferreira Vitorino, instead.

On July 18, Haley, still on the attack, dismissed and disparaged the Human Rights Council in an angry speech to the conservative Heritage Foundation in Washington. In her remarks, Haley sharply castigated other Human Rights Council member nations, as well as major non-governmental human-rights organizations, for not accepting her demands for reform: a wholesale change in how council members get elected, and the end to multiple resolutions condemning Israel for its treatment of Palestinians. Haley asserted US superiority and said it was other members who lacked the courage of their convictions. “No one should make the mistake of equating membership in the Human Rights Council with the support for human rights,” the Ambassador said.

“To this day, the United States does more for human rights, both inside the UN and around the world, than any other country,” said Haley, stating that other member countries, along with non-governmental organizations, should shoulder the blame for driving America off the council.

In reality, during its time in office, it is the Trump team that has almost methodically withdrawn US membership and money from several UN components, with severe financial costs to those organizations. The United States is withdrawing from UNESCO by the end of the year, walking out on more than $500 million in unpaid dues.

Trump has barred official US support for the UN Population Fund (UNFPA), which would mean a loss of over $30 million in the coming budget year. The UNFPA has the widest global reach in family planning and maternal health. The administration acted on the false-but-popular conservative-Republican anti-choice claim that the fund has facilitated forced abortion in China. When Congress tried to restore funding, the allocation was overturned by executive order.

On a larger scale, the Trump administration announced last year that it would revert to a 1995 law that unilaterally limited American contributions to UN peacekeeping to 25 percent of its total budget. That 1995 legislation had, by 1999, put the US in arrears a whopping $926 million, an amount that had to be cleared by the administrations of George W. Bush and Barack Obama. America was paying in 28 percent when Trump took office—a figure set by a UN committee and based on a nation’s share of the global economy (plus a surcharge for the five permanent members of the Security Council)—but the administration’s cutback means the United States will again start accruing millions in unpaid bills.

Under Trump, domestic politics have a global effect. The US withdrawal from the 2015 Paris climate agreement is one good example—the actions of one of the most prolific polluters affecting environmental protection and ecological balance around the world. Trump administration downsizing of protected federal lands, and the proposed weakening of the Endangered Species Act, as well as rollbacks of rules protecting clean air and water, could be felt by populations well beyond US borders.

Trump’s unilateral decision to pull out of the Iranian nuclear accord—a move actually criticized by Vladimir Putin, a party to and strong supporter of the accord, in his remarks during the Helsinki press conference on July 16—has led the other signatories of the agreement to scramble for ways to keep it alive.

The president abruptly pulled out of negotiations on the Trans-Pacific Partnership, leaving remaining parties to move ahead with deals that exclude the United States. And Trump is now floating a withdrawal from the World Trade Organization—undermining decades of regulatory stability and mediation successes not commonly seen as shackles on US power—and seems intent on sabotaging of the North American Free Trade Agreement.

While some cabinet members may favor a more internationalist approach—US chief trade negotiator Robert Lighthizer being one of the more public examples—a unilateral move against the WTO may be only a tweet away.

In light of these mounting if unpredictable attacks on global cooperation, the UN may be trying to regroup. But whether the UN can fight back effectively as the Trump administration works to weaken it institutionally and financially remains an open question.

Trump, who shows little understanding of how the real world works, demonstrates again and again that he is obsessed with reversing every international achievement of President Barack Obama without considering the consequences. But within the UN, neither Trump nor his national-security adviser, John Bolton, who has long been contemptuous of the organization, have turned their demolition crew on the Security Council (a body American presidents have a way of discovering they need from time to time).

That is perhaps surprising, as it was the council that handed the Trump administration its most decisive smackdown. In late 2017, after Trump peremptorily recognized Jerusalem as Israel’s capital, Ambassador Haley was forced to veto an otherwise unanimous resolution condemning the decision. Another stinging admonition followed in the General Assembly, despite threats from Trump and Haley about potential aid cuts for those governments that voted for the rebuke.

UN Secretary General António Guterres later said in an interview with Fareed Zakaria on CNN that Washington could no longer be seen as an impartial meditator of Middle East peace.

More recently, diplomats are seeing less of Haley around the UN, the former South Carolina governor instead choosing to spend her time on the road making speeches. Still, her vociferous support of Israel on virtually every Middle East issue and her sustained outrage over the Jerusalem votes still rankles other members.

And Bolton’s ascendancy in the White House could make tensions even worse. Now occupied with the North Korean “deal,” or Trump’s frustration with it, Bolton’s attention might shift to escalating tensions with Iran or Israeli-Palestinian violence. Sooner or later, though, his eye could turn to the UN—a body whose very existence he once questioned—and what kind of ambassador he wants to see there.