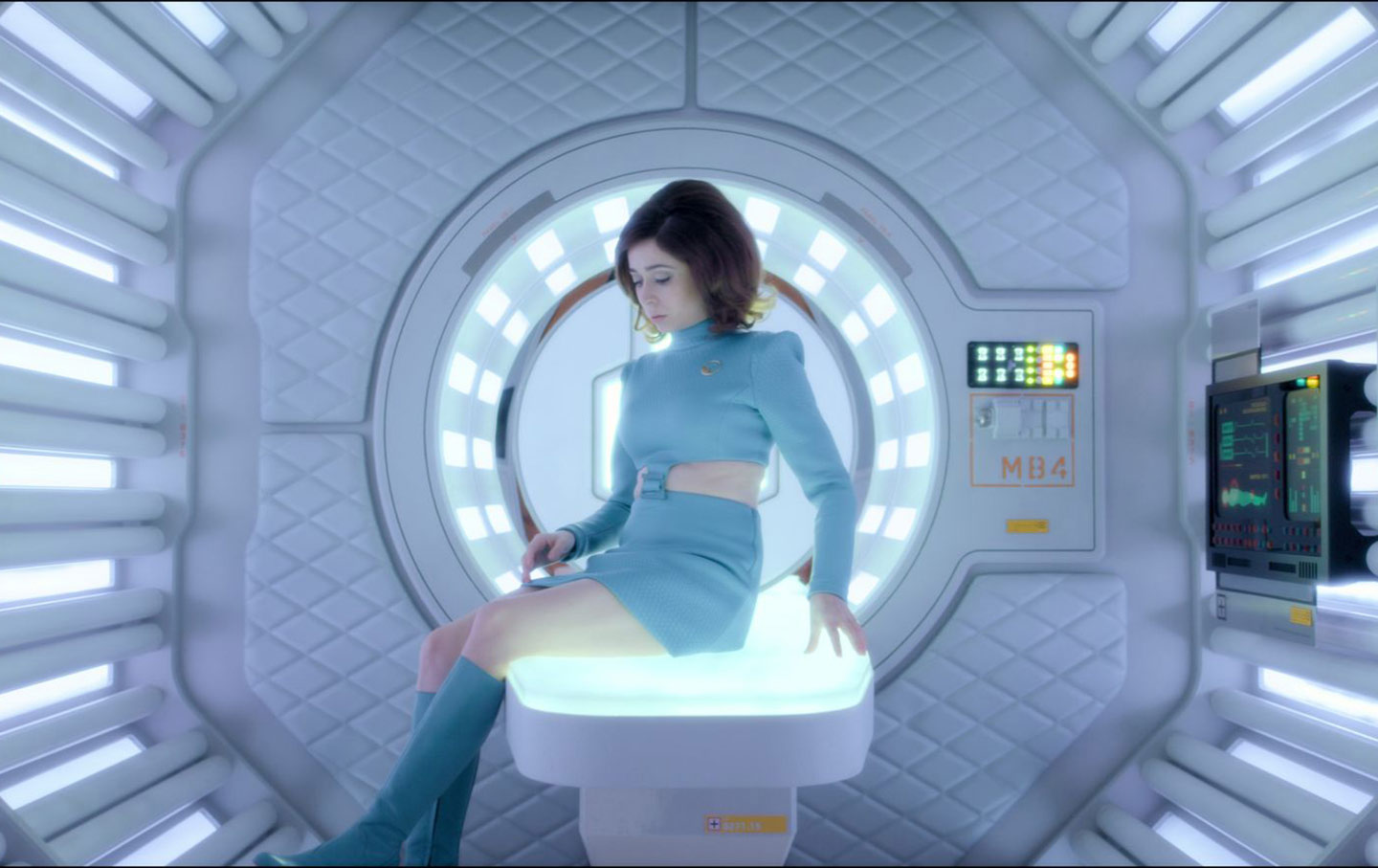 Lately, we’ve been seeing a boom in TV dystopias. Two of the most successful premieres in the past few years have been HBO’s Westworld and Hulu’s The Handmaid’s Tale: the former a solemn, plodding update of Michael Crichton’s 1973 film, in which subjugated androids revolt and take over a theme park; the latter a stylish and compelling adaptation of Margaret Atwood’s 1985 novel, in which the United States becomes a patriarchal theocracy. Other recent examples include Amazon’s The Man in the High Castle (based on Philip K. Dick’s 1962 novel about an alternate reality in which the Axis powers have won World War II), HBO’s The Leftovers (about a world in which 2 percent of the population has mysteriously disappeared), and Netflix’s new Altered Carbon (a cyberpunk gorefest based on a 2002 novel by Richard K. Morgan). Stretching the criteria a bit, one could perhaps include the long-running zombie odyssey The Walking Dead and its spin-off, Fear the Walking Dead, and sitcoms that play with dystopic elements, like The Good Place and The Last Man on Earth.

It’s taken a surprisingly long time for dystopia to become a viable TV genre. Science-fiction stories, of course, have long been a staple of the medium, though the preferred genre has been the space opera, an essentially hopeful series of adventures, modeled on the western and epitomized by Star Trek and its various offshoots and imitators. Meanwhile, dystopia has colonized virtually every other popular narrative medium, from feature films to young-adult novels. But rare, until recently, was the dystopian TV series.

In part, this is because dystopia, as a genre, poses specific problems for television. Dystopian narratives tend to be tonally flat: Their first priority is to assert how intolerable things are, and this precludes too much scenic variety or comic relief. Then, too, they’re rarely character-oriented and don’t lend themselves to the kind of lively ensemble casts that TV shows usually feature. The typical dystopian protagonist (think Winston Smith in 1984) is a kind of witness, a recorder of suffering, but not particularly complex or interesting.

Trickiest of all is finding a way to tell an ongoing serialized story set in a dystopian world that’s not unremittingly depressing or, worse, didactic. Dystopias rarely have happy endings, but they do have endings: They’re a species of morality play, which means that sooner or later they need to deliver a moral. The idea of spending weeks or years exploring a dystopian world is unappealing on its face, not only because these worlds are bleak but because, after a while, you get the point already.

Thus far, the most hospitable TV format for the dystopian impulse has been not the serial drama but the anthology series. A show like The Twilight Zone could squeeze all the juice out of a pulpy dystopian premise without worrying about having to find an infinite series of stories to build around it. The modern inheritor of this strategy is Black Mirror, originally produced for Britain’s Channel 4 and now available on Netflix. The show was created and is mostly written by the English satirist, journalist, and author Charlie Brooker, and each episode typically zeroes in on a single technological conceit: What if you could store a replica of a dead loved one’s consciousness on your smartphone? What if a computer-generated cartoon bear ran for public office? What if your likability on social media determined your credit rating and ability to travel?

Six new episodes of Black Mirror were released in late December, a fresh crop of nightmares to mark the end of a decidedly dystopian year. In “Arkangel,” a nervous mother implants a chip in her daughter’s brain to prevent her from being exposed to disturbing ideas or images. In “Hang the DJ,” a dating algorithm not only matches couples but gives each relationship an expiration date, in order to harvest data about each partner’s emotions and sexual behavior that will lead to a more perfect match. In “U.S.S. Callister,” a socially awkward start-up executive constructs his own private digital fiefdom modeled on a Star Trek–esque TV show—described by one of its inhabitants as “a bubble universe ruled by an asshole god.”

The classic dystopia describes a totalitarian society of some kind, but Brooker’s pocket dystopias are rarely concerned with the macropolitical. They’re usually about an invention that backfires or a product with unintended consequences, not a repressive state or political system. Again and again, systems and gadgets designed to make everyday life incrementally better wind up making it immeasurably worse. Here, Brooker’s worldview is close to that of someone like Kurt Vonnegut: Science will produce wonder after wonder, but humans will then use them to hurt each other and make themselves miserable.

Black Mirror is consistently provocative and clever, but it’s marred by a certain sadism. Brooker delights in torturing his characters, and sometimes his audience: Each episode is, in itself, a bubble universe ruled by an asshole god. The worst offenders in the new season are “Metalhead,” an interminable, episode-long chase sequence featuring a killer robot dog, and the grotesquely over-the-top “Black Museum,” which is less Twilight Zone than Tales From the Crypt as directed by Quentin Tarantino. The latter episode—a trio of shorter stories structured around a frame narrative—actually has one very good bit: The middle section, about a comatose woman whose consciousness gets implanted in her husband’s brain, is one of the season’s most elegantly elaborated ideas. But the first and third stories capture in microcosm the series’ failure as a whole: They pretend to be some kind of critique of humanity’s urge to experience or inflict pain while really being little more than expressions of it. We watch a black death-row inmate, digitally reincarnated only to be electrocuted over and over again by racist voyeurs, and we’re meant to be horrified—but Brooker can’t think of anywhere to go with the idea except to turn the tables and torture the torturer, at which point we’re meant to applaud. Brooker has all the imaginative chutzpah of the great dystopia creators—Orwell, Atwood, Ray Bradbury, Ursula K. Le Guin, Octavia Butler—but none of their empathy.

The success of Black Mirror is the proximate cause for the existence of Philip K. Dick’s Electric Dreams, also produced by Channel 4 and available here on Amazon. Dick, of course, is one of the past masters of the dystopia genre: His 1968 novel Do Androids Dream of Electric Sheep? was the basis for the seminal Ridley Scott film Blade Runner, and his work has been mined by Hollywood countless times ever since. Electric Dreams adapts 10 of Dick’s short stories, including “The Hood Maker” (which imagines a class war between telepaths and normal citizens, who resent their minds’ being invaded) and “The Father Thing” (in which a child’s father is replaced by a sinister alien doppelgänger).

Electric Dreams is slickly made and intermittently effective, but despite some half-hearted attempts to reimagine or update the material (the boy in “The Father Thing,” upon uncovering the alien conspiracy, posts a video on the Internet with the hashtag “#RESIST”), it doesn’t really feel of our moment. Part of the problem is that Dick’s work has been adapted for film so many times already that it’s hard to watch a given episode of Electric Dreams, however well executed, and not compare it unfavorably, if unfairly, with Blade Runner, or Paul Verhoeven’s Total Recall, or Steven Spielberg’s Minority Report. Dick’s sensibility is idiosyncratic and sui generis, but at this point it feels more like a piece of intellectual property than the amphetamine-fueled gnostic vision it once was. Is anybody’s mind really blown by the is-our-world-real-or-just-a-simulation conundrum posed by “Real Life,” for example, after we’ve seen not only Total Recall but The Matrix and Westworld and a hundred other iterations of it?

The problem, however, isn’t just overfamiliarity. Dystopias draw their power from an analysis of the present, and Dick’s once-radical vision of the future is now as far in the past as H.G. Wells’s was for Dick when he began writing. This is what Black Mirror, for all its flaws, has over Electric Dreams: The series feels like it’s about things that Brooker is genuinely worried about, not a dutiful tribute to what someone was worried about in the 1960s; it’s the future as seen from the 21st century, not the 20th. This problem is endemic to many of the recent dystopian shows. The fact that Westworld is based on a movie from 1973, and The Handmaid’s Tale on a novel from 1985, doesn’t invalidate their value as entertainments or as cultural commentaries. But it does introduce concerns alien to the dystopia’s imperative to take the worst of the present day and amplify it.

Of course, all of these shows were conceived before the advent of the Trump era, which is certainly furnishing plenty of material for dystopian storytellers. Understanding the problems of the present well enough to project an even more terrible future takes time; it’s always easier to fall back on familiar horror stories than to do the work of comprehension that would produce a new one. (Think of how quick pundits and intellectuals were, after Trump’s election, to reach for their copies of 1984.) It may be that the next wave of dystopian television, assuming there is one, will produce a masterpiece that says as much about our moment as Dick and others have said about theirs. But for now, the future ain’t what it used to be.