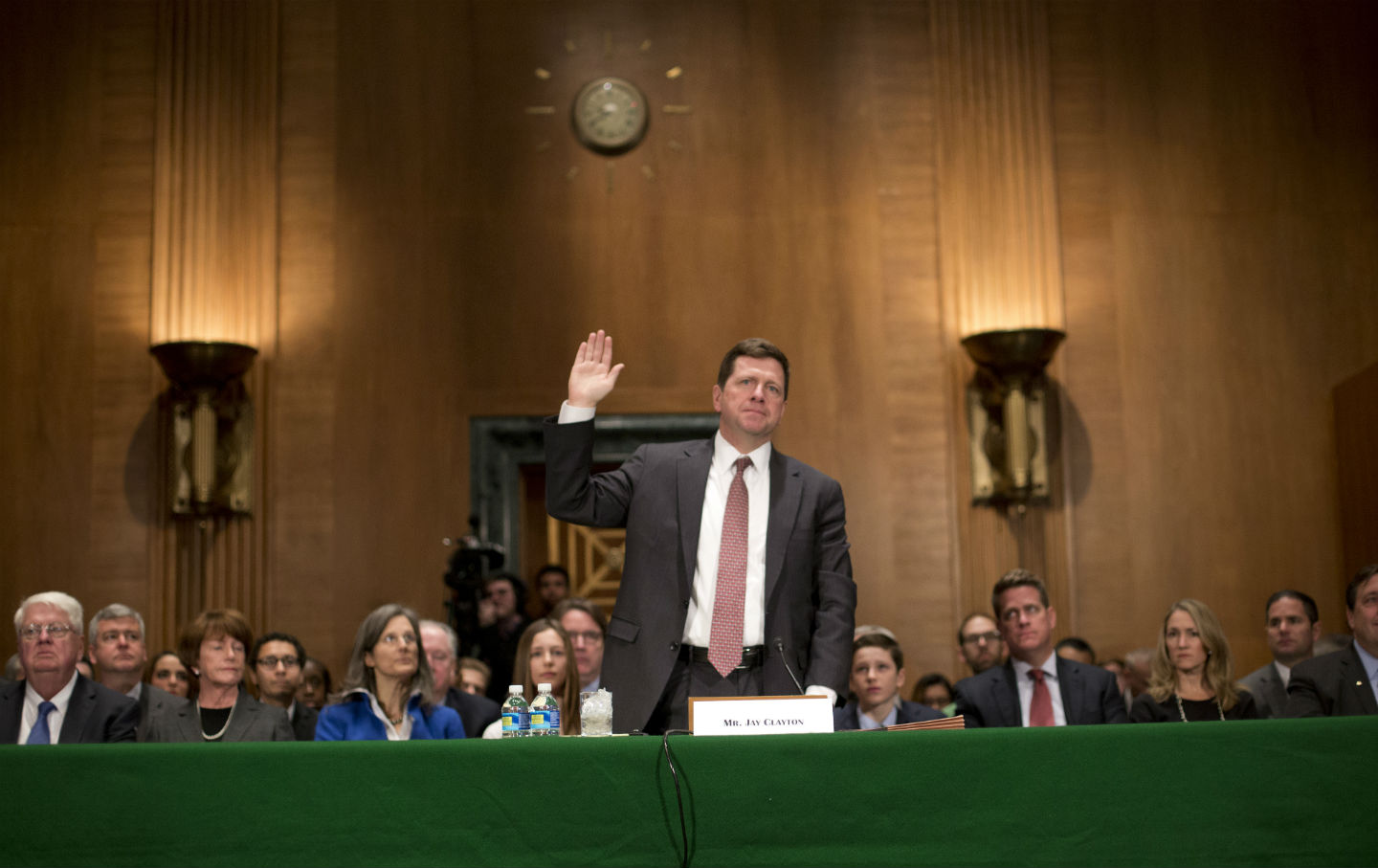 The dominant theme of Thursday’s Senate Banking Committee hearing with Jay Clayton, nominee for chair of the Securities and Exchange Commission, was conflict of interest. Not the well-documented conflicts of some of the more notorious members of the Trump administration but the conflicts of Clayton himself.

A partner at the high-powered corporate law firm Sullivan & Cromwell, Clayton represented Wall Street banks throughout his career. He served as Goldman Sachs’s lawyer during the Wall Street bailout, allowing it to emerge from the financial crisis relatively unscathed. He helped deliver failed investment bank Bear Stearns to JPMorgan Chase and other failed investment bank Lehman Brothers to Barclays. He defended Ally Financial in its foreclosure fraud settlement with the government and represented Deutsche Bank in its “mirror trade” Russian oligarch money laundering scandal. He was the lawyer of record with mortgage servicer Ocwen during a scandal so distasteful the CEO was forced to resign. Oh yeah, also his wife is a broker at Goldman Sachs. (She reportedly plans to step down upon Clayton’s confirmation.) Matt Taibbi rightly suggested that Clayton would be “the most conflicted SEC Chair ever,” and given the history of SEC chairs, that’s saying a lot.

Clayton’s non-bank clients raise more alarm. They include Valeant, the scandal-ridden pharmaceutical company, and Volkswagen, which deceived the public by cheating-diesel emissions tests. According to Public Citizen, Clayton’s family gets millions of dollars in annual dividends from a private company named WMB Holdings, some of which Clayton plans to retain even if confirmed. This company and its affiliated partners (Delaware Trust Co and CSC) are conduits for creating shell corporations and other sketchy vehicles used in tax evasion and money laundering. Public Citizen found apparent links between these companies and Mossack Fonseca, the notorious Panamanian law firm at the center of the Panama Papers scandal.

Unfortunately, WMB didn’t come up in the hearing today. But Senator Elizabeth Warren, who spoke at a  rally against Clayton’s nomination yesterday on Capitol Hill, did highlight the practical effect of these conflicts of interest that enable the Trump administration and his wealthy friends to personally benefit.

Clayton would be unable to vote to enforce the law against several big banks, including Goldman Sachs and Barclays.

In her first round of questioning, Warren noted that, under a presidential executive order, Clayton would have to recuse himself from participating in any enforcement actions against a former client for the first two years of his tenure. That means “you would not be able to vote to enforce the law against several big banks, including Goldman Sachs, Deutsche Bank, Barclays, and UBS,” Warren said. These are firms that have been involved in repeated enforcement actions at the SEC.

But it goes further, because the executive order also forces recusal in any matter in which Sullivan & Cromwell, Clayton’s former law firm, is involved. And the firm’s roster of clients is massive. An analysis of its recent clients published by Allied Progress estimates that Clayton would have to withdraw “from cases involving nearly one-third of the institutions on the Financial Stability Board’s list of ‘global systemically important banks.’” Plus, as Warren points out, “any reasonably strategic company…could simply hire [Sullivan & Cromwell] to represent them before the agency, and you couldn’t vote for enforcement of that company.” Clayton mildly disputed this, but it’s accurate.

Why is this important? Clayton promised at the hearing to “enforce the law strictly” and to “root out any fraud and shady practices in our financial system.” But without Clayton’s input, the committee would be down to an even number of Democratic and Republican appointees. Normally that would be a 2-2 split, but currently, there’s a vacancy on each side. And if those commissioners disagree along party lines, a deadlock would mean not moving forward on enforcement. So putting a chair on the SEC who has to constantly recuse himself on enforcement matters really advantages corporation, as a tie lets them off the hook.

“If President Trump wanted to make sure that the SEC would have a hard time in going after his Wall Street friends, it seems to me that you would be the perfect SEC chair,” Warren said, revealing the scheme. You can lie in a number of contexts in American life, but when you lie where stocks and trades are involved, the SEC is supposed to step in. If it can’t because of Jay Clayton’s conflicts, corporations would be stupid not to keep on lying in a grab for profit.

To be clear, we just got finished having an SEC chair who had to constantly recuse herself from enforcement cases. Mary Jo White, a former (and now current) partner at another big-time Wall Street law firm, Debevoise & Plimpton, had to recuse herself from over four dozen investigations in her first two years, and in numerous instances that resulted in a 2-2 deadlock, ending the case. White’s husband John White was a corporate lawyer with Cravath Swaine & Moore, and corporations hired Cravath just to knock White out of cases, precisely the fear Warren expressed regarding Clayton.

Clayton protested that, if he recuses, “my fellow commissioners will be able to handle the matters ably and to good effect.” Senator Mike Rounds (R-SD) suggested that a split vote doesn’t mean that the corporation is guilty of the crime, which is irrelevant. Senator Thom Tillis amusingly fumed about punishing success, actually saying, “I feel like I’m living in a reality-TV version of Atlas Shrugged.”

But Senator Brian Schatz (D-HI) got to the heart of the issue. Recusals aside, the personal relationships that come from being marinated in a Wall Street viewpoint cannot help but play a role in shaping someone like Clayton’s perspective. Even if there’s no reason to recuse from a case, Clayton likely knows the lawyer on the other side of the table, or the client, or both. You hear about foxes being put in charge of hen houses, but it’s more like putting in charge another hen, someone who listens to and understands the industry more than the stated mission of the regulatory agency.

In her second round of questioning, Warren offered a practical application. Clayton admitted that he met with billionaire investor Carl Icahn after he was nominated for SEC chair. Icahn has an unpaid role with the Trump administration as a deregulatory czar, but has not sold off any of his prodigious holdings. He has been accused of using his influence with Trump to get a change to ethanol rules that will save an oil refinery he controls $200 million a year.

You hear about foxes being put in charge of henhouses, but it’s more like putting in charge another hen.

Clayton told Warren at the hearing that Icahn and he discussed the importance of activist investors in improving the performance of public companies. Activist investing is what Icahn does. This is a billionaire lobbying the future SEC chair (without registering as a lobbyist) to encourage his business model. One of Icahn’s activist investments, the multilevel marketing company Herbalife, is under active SEC investigation. Clayton wouldn’t even say definitively that it would be inappropriate to speak with Icahn if he were confirmed.

Warren noted that Icahn could easily use material non-public information gained by advising the administration to make money on stocks, a classic insider-trading scenario under the SEC’s purview. “The Trump administration has conflicts everywhere,” she said. “It’s difficult to determine whether someone is working in the interests of American people or lining their pockets.”

Clayton, of course, pledged no favoritism. But he’s the worst person to adjudicate this, being hopelessly conflicted himself, both specifically with his Wall Street clients and in terms of mindshare. If the SEC was ever a cop on the beat, it is turning off the siren and going back to the police station for a few years. Corporate wrongdoers can’t wait.