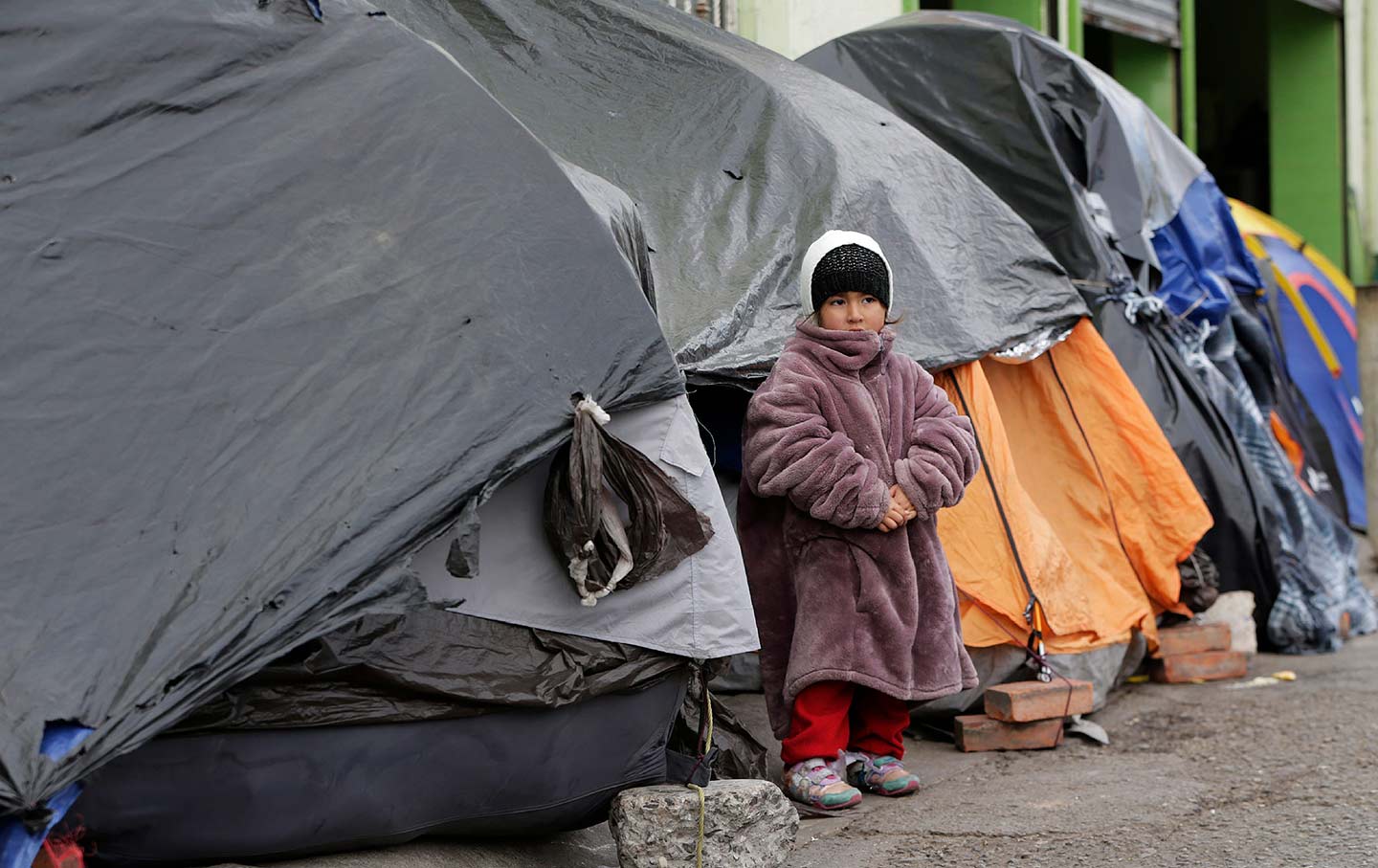 A young asylum seeker from Zacatecas, Mexico, tries to keep warm as she and hundreds of others camp at the base of the Paso del Norte International Bridge on November 12, 2019, waiting their turn to cross into the United States. (Mark Lambie / El Paso Times, El Paso Times via Imagn Content Services, LLC)

With all the attention being paid to the whistle-blower who set off the impeachment inquiry and the anonymous “senior Trump administration official” whose book was published this month, a story about yet another insider slamming the Trump administration has been almost entirely ignored.

This one is a damning moral, and legal, indictment of Trump’s “Remain in Mexico” policy from an asylum officer and attorney who refused to implement the Migrant Protection Protocols—an Orwellian-sounding process by which the administration sends those seeking asylum at the southern border to ramshackle and dangerous camps in Mexico to await their court hearings. The e-mail they sent to USCIS management was obtained by Democratic Senator Jeff Merkley, and published by The Washington Post this week.

“The MPP is illegal,” wrote the officer. “The program exists without statutory authority under the [Immigration and Nationality Act], violates normal rulemaking procedures under the [Administrative Procedure Act], and violates international law. The program’s execution impairs the fair implementation of our laws and runs directly counter to the values of [the Refugee, Asylum, and International Operations Directorate]. I respectfully decline any further participation in the program.” You couldn’t get much more Signal than that.

The letter continued: “The MPP is clearly designed to further this administration’s racist agenda of keeping Hispanic and Latino populations from entering the United States. This is evident in the arbitrary nature of the order, in that it only applies to the southern border.” That racist agenda has been firmly on display this week: The Associated Press reported that nearly 70,000 migrant children have been held in detention centers this year—an all-time high.

Not only that, but after introducing new fees for asylum applications last week, the administration announced Monday that it was also proposing rule changes that would make asylum seekers wait a year for work permits and deny them outright to anyone who had crossed the border illegally. It would also deny work permits to applicants who missed any asylum-related meetings or hearings—even if that was due to a clerical error.

Eleanor Acer, senior director for Refugee Protection at Human Rights First, issued a statement accusing the administration of aiming “at inflicting pain on people seeking US refugee protection—in this case apparently to leave them starving and homeless.”

Meanwhile, the rollback of vital environmental protections continues apace. The latest affront: The EPA rejected a request from the Public Employees for Environmental Responsibility to phase out the use of hydrofluoric acid in oil refineries over the next two years, despite documented evidence that even minute traces of the substance in the air can sicken or even kill workers and residents in nearby communities. Despite PEER presenting numerous examples of dangerous exposure to the acid, the industry-friendly EPA decided the petition had a “lack of sufficient facts.”

And the Noise? The top candidate this week surely has to be Devin Nunes and Jim Jordan dog-whistling through the opening public hearings in the impeachment inquiry. But Trump asking for only “friendly reporters” at his press conference with the awful Erdogan surely has to rank a close second.