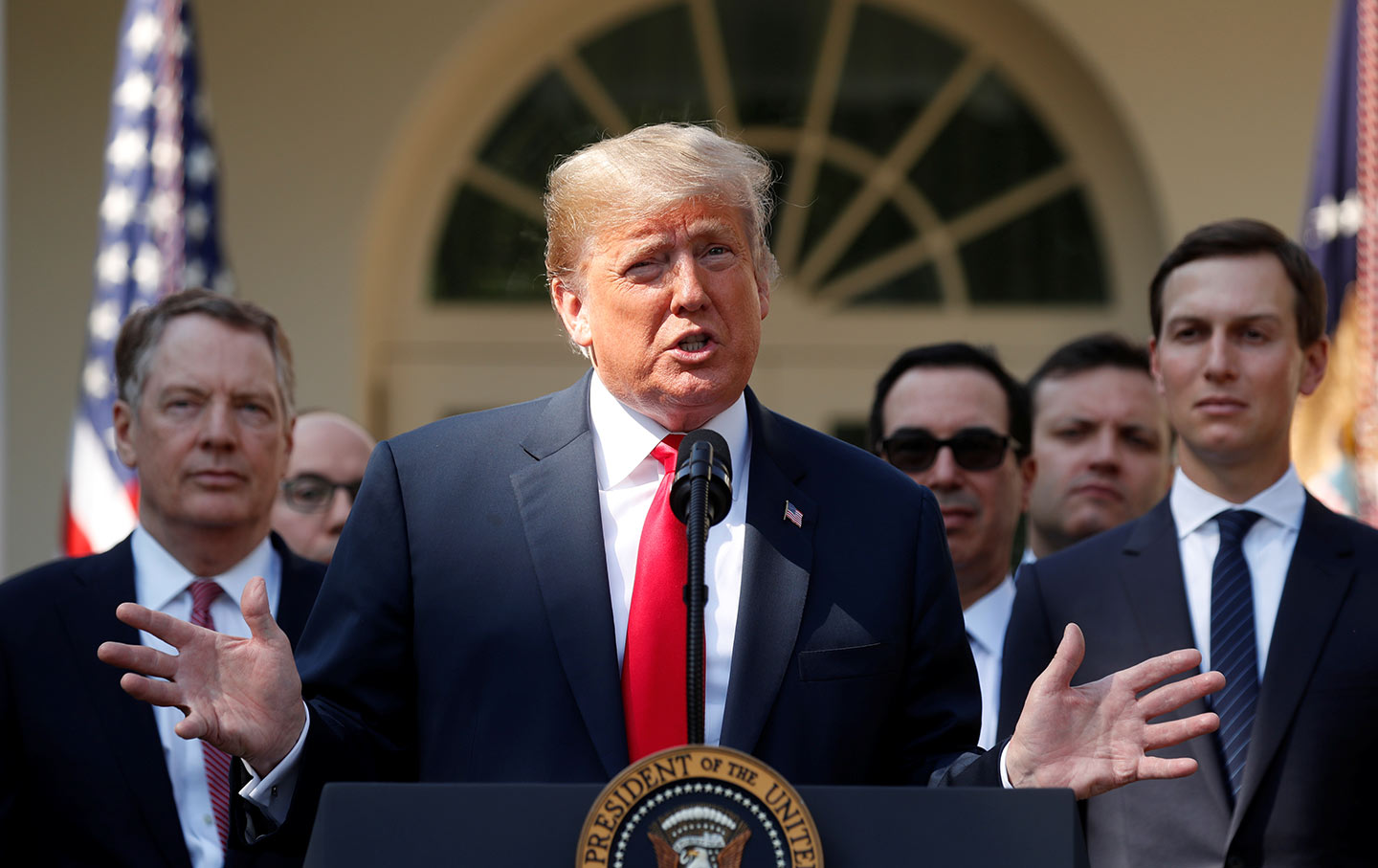 When President Trump announced his grand plan for a new and improved NAFTA, he seemed most proud of the new name—replacing NAFTA with the more awkward-sounding United States-Mexico Canada-Agreement (USMCA). And no wonder: Other than the name change, it’s the same old story.

In an analysis of the final draft, the Labor Advisory Committee (LAC), representing the Teamsters, American Federation of Teachers, SEIU, and other major unions, concluded that the deal’s “incremental” reforms failed to resolve the problems caused by the old NAFTA. And the text overall neglected “the basic fact that the United States’ market-fundamentalist, pro-corporate approach to trade and globalization fails socially, politically, and economically.” Advocacy groups give NAFTA 2.0 tepid grades on environmental, labor and social protections, noting that the new deal threatens to weaken the agreement’s existing, already-threadbare public-interest safeguards.

Trump’s deal does attempt, nominally, to address NAFTA’s underlying third rail: migration. It states that migrants are entitled to protection under the host country’s laws. Centro de los derechos del migrante, which advocates for visa-based migrant workers, commended the measure, but also remarked that “we cannot determine whether the mechanism is enough to address abuse until we submit a complaint.” And in light of the egregious labor violations that plague the current US-Mexico “guestworker” system, it’s not even clear what will ultimately be enforced. The LAC pointed out that these provisions crucially do not guarantee equal protection under domestic law—an omission “could enshrine differential treatment for migrants as adequate under NAFTA…. Clearly, so long as the government allows any worker to be abused with impunity, all workers are at risk of such abuse.”

Reflecting Trump’s strategy of rewarding high-profile interest groups, the agreement gestures towards auto workers by raising requirements for US-manufactured car content to 75 percent. It also adds an unprecedented provision ensuring average base wages of $16 per hour for “production workers.” Though these measures could be significant advancements, LAC warns that it remains unclear whether rank-and-file workers would actually be protected from the so-called “race to the bottom” on labor standards, since enforcement depends on precise legal definitions that will be left to the administration’s discretion.

United Auto Workers cited endemic corruption in Mexico and stated that for the reforms to actually help workers, the administration must ensure that “Mexico is going to fix weak labor laws and enforce new worker protections.” It’s a tall order for an administration known for systematically dismantling US labor protections at home.

At the same time, Mexico is already moving on its own progressive trajectory on labor rights, regardless of NAFTA’s pressures. According to Manuel Perez-Rocha, a fellow with the Institute for Policy Studies focused on global labor, the new labor provisions represent “a good recognition” of past flaws in the deal, but lack of enforcement remains the chief obstacle. Even the more positive-sounding rules on workers’ rights are subjected to “soft law,” devoid of any legally binding mandate. And he adds, “more importantly…the improvement of rules on labor rights and labor standards in Mexico does not depend on the free trade agreement but on domestic policy.” On that, the pro-labor incoming administration of Andrés Manuel López Obrador may prove much more instrumental than whatever Trump’s negotiators dictate from Washington.

Similarly, Trump’s deal butters up the US dairy industry by pushing Canada to drop trade barriers to Canadian dairy markets. The price of “market competition” in Canada is the destruction of its long-standing dairy supply-management system, which regulates domestic production to protect local markets. In the long run, this move promotes neoliberal market deregulation, which ultimately drives the real crisis facing US dairies: unregulated overproduction that promotes export dumping.

Potentially more devastating is the NAFTA 2.0’s potential to grease the skids for environmentally destructive fossil-fuel exports to Mexico. According to the Sierra Club, the new agreement retains a previous provision that “facilitates increased fracking in the U.S., expansion of cross-border gas pipelines, and growing dependency on climate-polluting gas in Mexico.” With Mexico’s natural-gas imports up more than 1,000 percent since the late 1990s, the group says, “NAFTA is undercutting Mexico’s efforts to transition to renewable energy and tackle climate change.” Already communities in the Sierra Norte de Puebla are being encircled by fossil-fuel companies, which have dotted the habitat with 1440 shale-gas wells awaiting exploitation, in the midst of indigenous lands and fragile ecosystems.

While Trump promised to curb NAFTA’s economic disruption for US communities, the new version actually invites corporate investors to penetrate previously ring-fenced public institutions with deregulation and privatization. New strictures on the regulatory process could marketize sensitive sectors such as health care—including drug-price regulation for crucial medicines—public transit and municipal water utilities. The LAC warns, “No trade deal should interfere with the right of a country’s citizens to determine how best to provide public services to residents.”

Yet that’s essentially the purpose of trade deals: to prioritize market liberalism above people’s liberty. The USMCA’s weaknesses reflect the fundamentally anti-democratic nature of the negotiation process—dominated by corporate backroom deals and closed to the public.

The left-leaning United Electrical, Radio & Machine Workers union (UE), which has campaigned for cross-border solidarity under NAFTA, rebuked the USMCA as political rebranding of business as usual. Instead of extra-constitutional corporate law, the union declared:

Workers and our communities deserve an agreement which protects our right to a decent and environmentally sustainable living and has enforcement mechanisms to insure that sovereignty, democracy, and justice can be defended from corporate actions which benefit the 1% at the expense of the 99%.

Currently, there’s little chance of major revisions passing before the Republican-controlled Congress seals the deal via Trump’s fast-track authority. Even if the House flips to Democratic control in November, and even if minor progressive revisions are later tacked on, according to Arthur Stamoulis, coordinator of the Citizens Trade Campaign, “enforceability won’t be enough to warrant support” from grassroots groups.

In any case, free-trade deals have been actively promoted by both Republicans and Democrats in recent years. So the final outcome depends now on the political momentum activists marshal to pressure Congress. Still, with a congressional shakeup potentially on the way and a left-leaning administration ascending in Mexico, Stamoulis argues: “To my mind, the more immediate question is whether labor will be united enough to get the Democrats united enough to effectively advance a clear strategy with clear demands.”

The new NAFTA might hit some feel-good political notes. But, as always, the real-life impact of its protections for labor, the environment, and human rights comes down to the political will to wield the law to support those communities—a political will that is rooted in the rights that free-trade deals inevitably leave out: the people’s power to defy a rigged system.