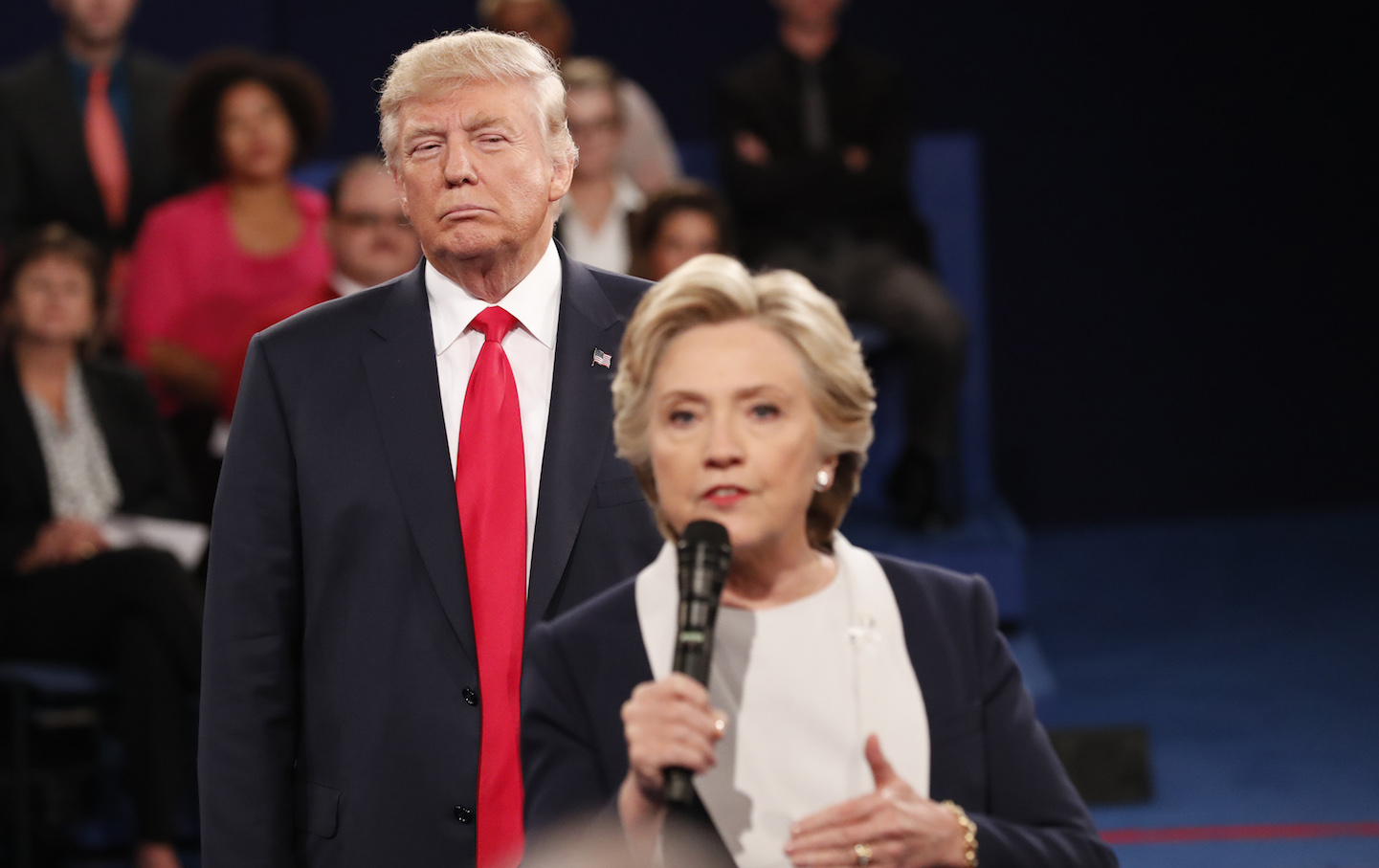 In the 13 days after the last presidential debate, Donald Trump dug himself a hole, turned it into a bunker, and began throwing grenades at his enemies, including many within his own party. On Sunday night he threw his biggest bombs at Hillary Clinton, but his bunker busters landed on himself.

Confronted by the most dramatic news of the week, if not of his entire surreal campaign—the revelation that 11 years ago, Trump boasted on a hot Access Hollywood mic that he could sexually assault women just because he’s a “star”—the besieged GOP nominee gave us a bizarre non sequitur: “This was locker-room talk. I apologized to my family, I apologized to the American people,” he told CNN’s Anderson Cooper. “But we have a world where you have ISIS chopping off heads and frankly drowning people in steel cages.… this is like medieval times.” He seemed to be defending grabbing women “by the pussy” because “this is like medieval times.” Who knew? But I have to admit: Watching Sunday night’s debate did feel a lot like medieval torture.

In the 90-minute clash, a must-win for Trump, the flailing nominee stalked Clinton creepily, looming behind her menacingly, and slightly hilariously, in shot after shot on live television. Again he sniffed incessantly, and he barked at the very capable moderators. “It’s three against one,” he bleated, when CNN’s Anderson Cooper and ABC’s Martha Raddatz reined him in on going over time limits. He claimed Clinton “has tremendous hate in her heart,” and threatened to put her in jail in the increasingly unlikely event he becomes president. And when asked if he agreed with his running mate Mike Pence about the need to intervene in Syria, he said no. “We haven’t spoken, and I disagree with him.”

But all of that seemed fairly normal compared to the debate’s opening antics. An hour before, as pundits wondered whether Trump would come into the session appropriately “contrite” about his sexual-assault braggadocio, the defiant, perhaps deranged GOP nominee invited the media into a room to meet women who have charged Democratic nominee Hillary Clinton and her husband with a variety of unsubstantiated misdeeds. There were old Clinton accusers like Paula Jones and Kathleen Willey, the Trump-supporting Juanita Broaddrick, who went public with claims Bill Clinton raped her 20 years after she alleges it happened, and a now-grown juvenile rape victim whose assailant was defended by a young law professor named Hillary Clinton—who was appointed by the judge in the case. It was the lowest moment in American politics of my lifetime—and it signaled how the debate would proceed.

Debate moderators struck early with questions about Trump’s awful Access Hollywood video. Clinton’s answer was strategic. She noted that Trump had said many awful things about women, but that he’d also insulted “African Americans, Latinos, people with disabilities, Muslims and so many others. This is not who we are.” She went on: “I want to send a message to every boy and girl…that America is already is great, but we are great because we are good, and we will respect one another, and we will work with one another, and we will celebrate our diversity.”

Trump, kind of listlessly, hit Clinton for failing to create a sufficient number of jobs in upstate New York as senator, then weirdly pivoted. “Bill Clinton was abusive to women. Hillary Clinton attacked those same women and attacked them viciously—and four of them are here tonight.” Clinton ignored the charge and did her own pivot, pointing to Trump’s attacks on Khadir Khan, Judge Gonzalo Curiel, and journalist Serge Kovaleski, then adding: “And he never apologized for the racist lie that President Obama was not born in this country.” In the Harlem restaurant where I watched the debate, the crowd erupted in cheers.

Trump pulled himself together, a little, after that. But he did nothing to help himself. He has been hemorrhaging Republican support: After 16 months of ignoring his racism, misogyny, and cruelty, party leaders began to buckle since the release of the Access Hollywood video. An array of top GOP congress members, including those up for reelection like Senators John McCain of Arizona, Kelly Ayotte of New Hampshire, and Rob Portman of Ohio, plus senate candidates like Representative Joe Heck in Nevada, dropped their support for their party’s nominee. Almost 70 GOP senators, House members, and governors unendorsed Trump and/or asked him to step down from the ticket over the weekend.

Depressingly, many cable pundits, even on the non-Fox networks, tried to claim that Trump, if he didn’t exactly win, didn’t lose—and did better than expected. Then results from instant polls began to come in, showing their viewers judged Trump the clear loser—a CNN poll had him down 57-34 to Clinton—and the conversation began to change. No matter: Trump held himself back from a complete Alec Baldwin on Saturday Night Live–style meltdown, but he was still a disaster. We deserve to have a better understanding of their policies on both Syria and Wall Street regulation, but that’s not the political culture we are living in, at least when it comes to television. We saw, clearly, a man who cannot be president, versus a woman who is very much ready to assume the responsibility.