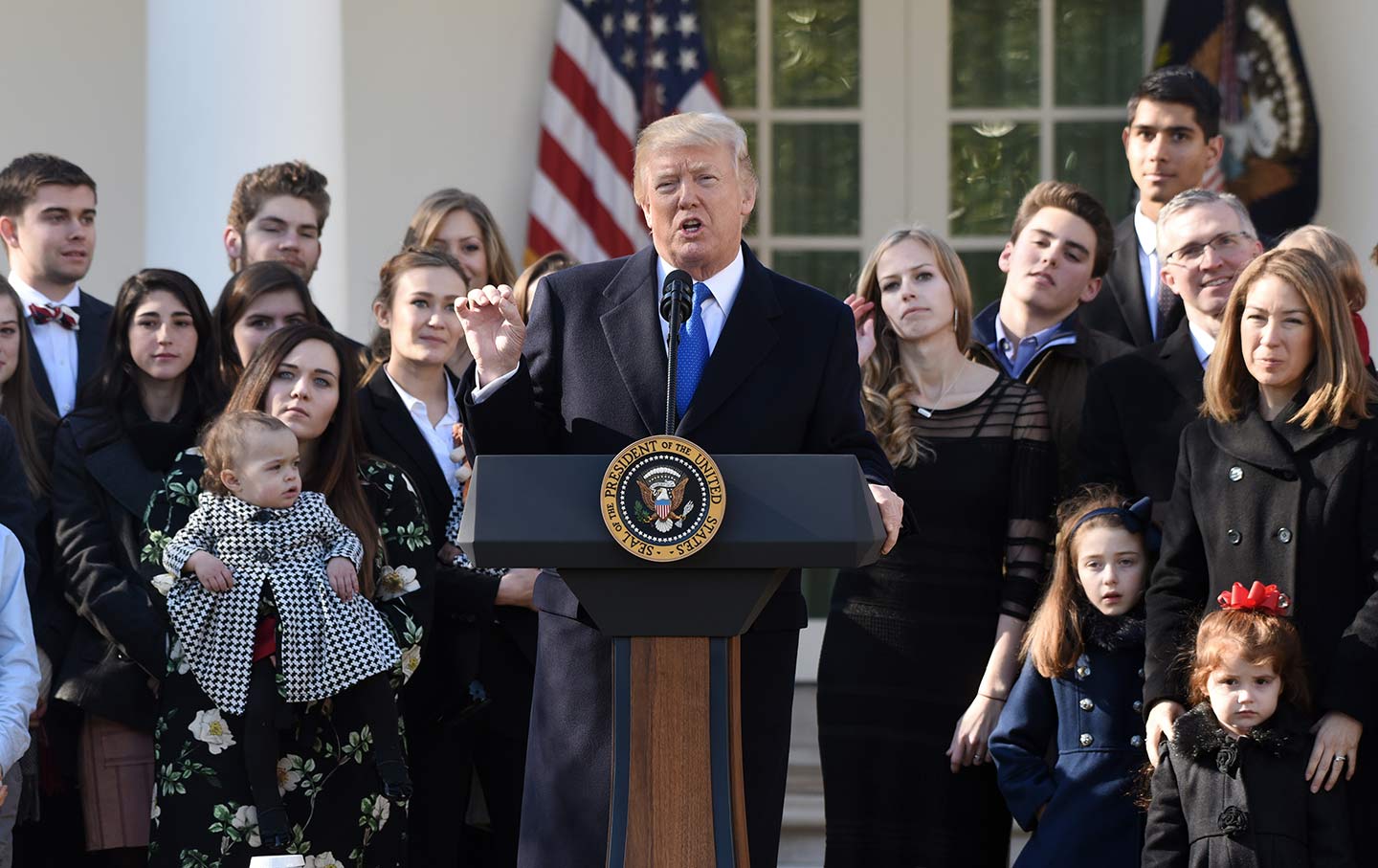 US President Donald Trump addresses March for Life participants and pro-life leaders in the Rose Garden of the White House on January 19, 2018. (Sipa via AP Images)

Matthew Bowman once wrote that employers who provide contraception coverage “kill embryos and bow to the altar of fruitless intercourse.” He believes that contraceptives cause abortion and enable “promiscuity,” and that the birth-control-coverage mandate in the Affordable Care Act was part of the government’s “anti-fertility” regime. He rants about contraception as a part of “liberal faith in the sexual revolution.” He subscribed to a radical fundamentalist Christian group that sought “to recover the robust Christendomic theocracy of the 3rd, 4th, and 5th centuries.” And he is deputy general counsel for our Department of Health and Human Services in the Trump administration and an architect of Trump’s health-care policy, including the rule last year that overturned the ACA’s contraceptive mandate. This is now the approach to family planning in our country.

For decades, support for family planning in America was bipartisan. But under the Trump-Pence administration, we’ve seen attacks on reproductive rights reach a fever pitch—not just on access to abortion care, but also on contraception in all forms. Trump owes his election in large part to white evangelical voters, and he’s paying them back for their support; as Vice President Pence recently noted, he is acting as “the most pro-life president in American history.” Trump has not just embraced the anti-choice movement—he is giving a platform and formidable power to its most extreme and fringe leaders who have all forms of reproductive rights in their crosshairs. And accordingly, a recent poll found Trump’s approval rating among white evangelicals at an all-time high of 75 percent.

The politics of reproductive rights have never been clear-cut, and they’ve never just been about abortion or about life. In fact, Republican activists helped establish Planned Parenthood and Republican lawmakers worked to secure its funding; it was female Republican leaders who fought to legalize contraception and expand access; it was President Nixon who first called for a national family-planning program and created Title X. Well-known Republicans like Katharine Martha Houghton Hepburn; Barry Goldwater and his wife, Peggy; John D. Rockefeller Jr.; President Eisenhower; even the first President George Bush—these were birth-control champions and reformers. Even when the Republicans first adopted a position on abortion at the 1976 convention, the party and its delegates were majority pro-choice. The abortion issue was mostly used as a political tool, in this case to attract more Catholics to the party.

But as the religious right grew its political power in the 1970s and ’80s, the Republican Party became more dependent on socially, not just fiscally, conservative voters. Anti-choice politics became fundamental to the party. Meanwhile, the issue of choice became a cultural marker, increasingly associated with feminism, social liberalism, and the sexual revolution. Abortion was a kind of political Rorschach test—a stance on abortion became an indicator for a particular worldview and how one felt about gender roles as a whole. It was more than just abortion—it was about controlling women and their place in the world and maintaining the political power of the “pro-life” movement.

“Right now our country is at a 30-year low for unintended pregnancy, because of expanded access to birth control and sex education. This administration is trying to take all of that away.” —Erica Sackin, Planned Parenthood

A key part of the strategy to grow that power became the conflation of abortion and family planning. Dating back to the ’90s, groups such as the Christian Coalition, US Catholic Conference, and the National Right to Life Committee began to claim that US funding for family-planning services “freed up money to allow abortions to be performed.” Like Trump, George W. Bush owed his election to Christian voters—white evangelicals made up nearly a quarter of the electorate in 2004—and he spent his years in office bringing religion into many of his administration’s programs. In 2005 the Food and Drug Administration delayed approval of over-the-counter availability for emergency contraception, with opponents arguing it caused abortion and encouraged “teenage promiscuity.” In 2006 the George W. Bush administration appointed a head of family planning from a Christian organization espousing the idea that birth control is “demeaning to women, degrading of human sexuality, and adverse to human health and happiness.” Whereas Republicans had once been the party of family planning, now there was a flawed and dishonest narrative that contraception led to more abortions, rather than the inverse—and that it led to moral decline and a fundamental shift in the social order.

And that brings us to today. Trump is filling his administration, agencies, and courts with anti-choice activists who peddle junk science and lies about both contraception and abortion. They claim that certain methods of contraception, particularly IUDs and emergency contraception, are actually abortifacients by preventing implantation of fertilized eggs. Even if this were true, this would still be preventing pregnancy by its legal and scientific definition, but these methods almost always work by preventing ovulation or fertilization. And these officials have increasingly blurred the lines between contraception and abortion as a whole, extending the war on women to family planning. It was recently reported that a constituent who contacted the administration about the rollback of the birth-control rule was sent a response thanking her “for taking the time to express your views regarding abortion.”

Senior officials across the administration directly conflate contraception and abortion and spread misinformation—and outrageous rhetoric. It’s not just Matthew Bowman. Roger Severino, director of the Office for Civil Rights at HHS, has referred to “abortion-inducing drugs and devices” in regards to the Supreme Court case about contraception coverage. Scott Lloyd, the head of the Office of Refugee Resettlement at HHS, has written extensively about contraception as abortion—both literally, by his incorrect assessment of IUDs, emergency contraception, and contraceptive pills’ “killing nascent human life,” and also in his belief that “contraception leads to a culture dependent on abortion.” Lloyd traces contraceptives as the cause of abortion and the cause of “anarchy” in our society. “You can’t be pro-life and pro-contraception,” he maintains. Cathy Deeds, a former senior adviser in the Office of Population Affairs, wrote that emergency contraception is abortion and that the “assumption” that contraception reduces unintended pregnancies and abortions was “false.” Teresa Manning, who served as the head of HHS’s family-planning programs, also argued against contraception as a means of reducing abortions and said that “incidents of contraception use and the incidents of abortion go hand in hand.” She also referred to “new abortion-inducing drugs disguised as contraceptives.”

And still others. Charmaine Yoest, Katy Talento, and Valerie Huber, who have all served as top Trump health officials with anti-choice résumés, have made similar claims. Talento even said that birth control causes “miscarriages of already-conceived children” and will “ruin your uterus for baby-hosting.” Trump’s judicial nominees include Matthew Kacsmaryk, who blogged about opposition to emergency contraception as objecting to “government’s mandate to kill, cut, or medicate another human being,” or Wendy Vitter, who supported a fringe figure’s claims that the “pill kills” and abortion causes breast cancer.

Under the Trump administration, vital—formerly bipartisan—family-planning programs are being gutted and cut. The birth-control insurance mandate was rolled back. The future of Title X, part of Nixon’s legacy, is at risk. The Teen Pregnancy Prevention Program is being cut. Comprehensive sex ed is being replaced by abstinence-only curriculums. As Erica Sackin from Planned Parenthood noted, “The Trump-Pence administration is undermining the nation’s program for affordable birth control that 4 million people rely on. They have stacked this administration with people who are far outside the mainstream, and who believe abortion should be criminalized and that women shouldn’t be using birth control. Right now our country is at a 30-year low for unintended pregnancy, because of expanded access to birth control and sex education. This administration is trying to take all of that away.”

There shouldn’t be a debate here—this is common sense. Accessible and affordable contraception reduces unplanned pregnancies, which leads to lower abortion rates. Rima Cohen, a former Obama HHS official observed, “Family-planning services are a key part of preventive health. There is strong scientific evidence that increased access to affordable contraception leads to a reduction in unintended pregnancies and healthier and more economically secure mothers and families.” And Americans remain staunchly and consistently pro-choice. In recent polling, 75 percent of voters strongly agreed that everyone must have the freedom to decide whether and when to become a parent.

Perhaps this isn’t an argument about “life.” If it were, the far right would be preventing unwanted pregnancies, not creating obstacles to contraception or recommending the death penalty for women. If it were about protecting babies and children, the far right would be investing in postnatal care and WIC and CHIP, not calling for cuts to those programs. Rather, anti-choice politics have become an indication of a broader political and cultural ideology—one that keeps women out of the public sphere and positions of power. Access to abortion care and contraception both conflict with this worldview. As the ruling in Planned Parenthood v. Casey affirmed, “The ability of women to participate equally in the economic and social life of the Nation has been facilitated by their ability to control their reproductive lives.” Reproductive freedom allows women to control their own sexuality and lives, which for many seems a dangerous proposition.