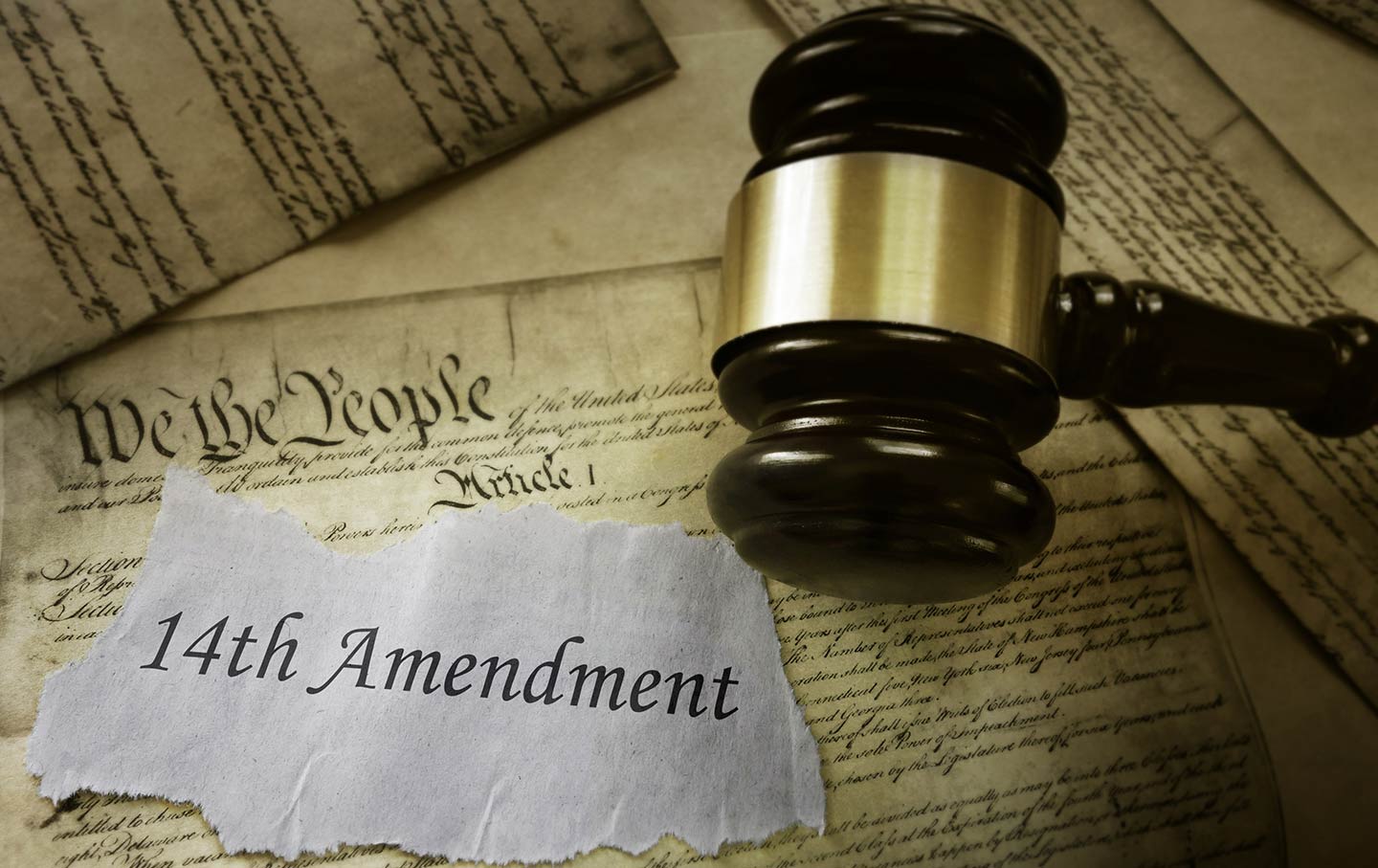 Trump’s chaos strategy, which involves throwing so much filth into the air with such frequency that it becomes almost impossible to focus on the bigger picture, has been in overdrive the past few days.

He has tweeted that we face a “National Emergency,” and that a caravan of destitute, desperate asylum seekers from Central America are coming to “invade” the United States. And he has promised that they will be met by a military response. To this end, Trump has activated more than 5,000 armed, active-duty military personnel, with many more on standby, along the US-Mexico border—and on Wednesday he announced he might increase the deployment to 15,000—thus putting the US armed services at risk of violating the Posse Comitatus Act. Their deployment—a naked stunt, grotesquely named Operation Faithful Patriot, which in an era of poisonous political fearmongering risks a border bloodbath—begins just days before the midterm elections.

Trump has pledged to build huge tent cities in the desert to detain indefinitely vast numbers of undocumented immigrants and asylum seekers, despite the Flores settlement, which specifically bars the indefinite detention of children, and in the face of America’s international obligations to hear all asylum cases. Trump will likely use the same sham national-security arguments that he used in imposing his travel ban against large numbers of Muslims in his determination to completely shut the US border to Central American refugees. And now he is promising to sign an entirely unconstitutional executive order designed to wipe out, with a signature, the 14th Amendment’s guarantee of birthright citizenship.

Birthright Citizenship Is the Good Kind of American Exceptionalism

The Racist Roots of the GOP’s Favorite New Immigration Plan

Birthright Citizenship Is in the Constitution

This isn’t just chaos-as-normal. This is a full-frontal assault on the notion of constitutional, democratic governance. If he gets away with it—if Congress tolerates an executive order, or if senators such as Lindsey Graham introduce legislation to dilute the birthright-citizenship principle, and the electorate turns a blind eye to such blatantly unconstitutional governance—then the American Republic as we have known and lived it will have died.

That sounds hyperbolic. But this is a moment that historians in the future will examine and judge us on. They will either applaud us for having the courage to resist with all of our moral energies, to generate what Martin Luther King Jr. called “soul force” in the face of tyranny, and in doing so to force Trump’s ethno-fascism into retreat; or they will condemn us for sitting on the sidelines and waiting for congressional saviors who never came, while Trump and his nationalist friends put a torch to the constitutional structures of this extraordinary Republic.

Don’t expect mass resignations from Trump’s cabinet over this; for, although they have all sworn to uphold the Constitution, in reality they are behaving far more as if they have sworn a personal loyalty oath to The Boss. If this insanity is to be stopped, the stopping will have to come from us, the people, not from a morally neutered cabinet or an utterly degraded Republican Party.

Never, in my 46 years, have I so keenly felt that the eyes of history were upon us. My great-great-grandparents and my great-grandparents fled pogroms and poverty in Eastern Europe. Some sought salvation in the United Kingdom, others in America. They arrived in the United States and were processed through Ellis Island, near the great torch of freedom that is held aloft by the Statue of Liberty in New York Harbor. They came here and made new lives, as peddlers and office workers. Their children and grandchildren and great-grandchildren became dancers and musicians, businessmen, scientists, doctors, lawyers, union members, civil servants, laborers, writers. Some succeeded financially; others just made do. Some lived happy lives, others sad ones. In other words, they became Americans—with all the hopes and fears, successes and failures, of every other American story.

They came to America, as did my wife’s family, as did the families of all of my friends, as did the families of my readers, as did the families of my colleagues and my students, as did the families of Donald Trump, White House adviser Stephen Miller, and all the other architects of today’s nationalist nightmare, because this country represented something better. This country represented something new. This country had let the world know that its arms were open to strangers, and that it was a big enough place emotionally to make room for those who spoke different languages, ate different foods, worshiped (or chose not to worship) different gods. They came, as immigrants throughout history have done, because they wanted something better, safer, for their children. And they came because here, in this wondrous land, they could become citizens, and their children could become citizens: They would no longer be regarded as second class, as Jews were in Eastern Europe and Russia, internally exiled in a land of pogroms, in a purgatory of state-sanctioned violence.

What Trump is proposing, in his extraordinary assault on the 14th Amendment, would unravel not just a complex set of citizenship rules but the dream that anyone, from anywhere, can become an American. It is clearly designed to reinject racial and cultural criteria into citizenship status, and to further dehumanize brown and black migrants who have, throughout Trump’s vicious presidency, been continually described as “criminals” and “infestations.” It puts at risk not only new immigrant families, but the democratic fabric of post–Civil War America; for the 14th Amendment, at its core, was designed to protect the rights of African-Americans.

And, once birthright citizenship for the children of future immigrants is denied, what’s to stop this awful administration from taking the next step and revoking the citizenship of the children of those who came here without papers, or to others it deems undesirable? This step-by-step dismantling of citizenship protections is a policy reminiscent of the Nazis’ Nuremberg Laws—which themselves were at least partly inspired by racist US anti-miscegenation statutes and race-based immigration quotas.

How should we respond? We should not simply hope that sanity will prevail and that this idea will be canned when Trump somehow has a “road to Damascus” awakening. He won’t. And we cannot wait for Congress, or a now hyper-conservative Supreme Court, to grow a spine. They likely won’t either. And we cannot just repeatedly click the “sad” or “angry” emojis on Facebook. That doesn’t do anything except help us blow off steam.

This moment cries out for coordinated action.

The people, in their millions, are slow to arouse. But when aroused, the force of the many is unstoppable. That is one of the signature lessons of history. If the 14th Amendment is overturned by fiat, we, The People, should coordinate massive and militant strikes and work stoppages. There are tens of millions of immigrants in this country, and millions more who are the children of immigrants. Together, we are a vast, powerful, force. Elected officials in states and cities should pledge to uphold the Constitution and defend citizenship by refusing to cooperate with a federal government held hostage by extra-constitutional extremists, and by ordering state and city agencies in turn to engage in active non-cooperation. We should be protesting in Washington and in every state capital, in numbers that simply cannot be ignored. Forget about a million-person march. This assault on citizenship rights needs to be met by tens of millions saying “not in our name.”

As the free-speech advocate Mario Savio famously put it in 1964, “There’s a time when the operation of the machine becomes so odious, makes you so sick at heart, that you can’t take part! You can’t even passively take part! And you’ve got to put your bodies upon the gears and upon the wheels, upon the levers, upon all the apparatus, and you’ve got to make it stop! And you’ve got to indicate to the people who run it, to the people who own it, that unless you’re free, the machine will be prevented from working at all!”

California, with close to 40 million people, is in a particularly strong situation to lead on this. If Trump can simply walk away from the 14th Amendment, California, with its millions of immigrants, should make clear that it, too, is willing to walk away from the absurd constitutional framework that gives all states two senators. Since California has roughly 70 times the population of the smallest state, it should quite simply refuse to continue to abide by a rigged system that is producing ethno-nationalist results increasingly intolerable to modern, democratic, human-rights-oriented values, and increasingly at odds with the beliefs held by the great majority of Americans. That’s not so outlandish a concept: After all, if constitutional provisions really are up for grabs, as Trump now says they are, if the talismanic power of that 230-year-old document really is waning, let’s put the monstrously antidemocratic Senate structure into the mix as well.

If this constitutional crisis intensifies—and make no mistake, the shredding of a constitutional amendment by executive action would be a full-blown constitutional crisis—the three West Coast blue states, along with any others that care to join them, ought to be willing to coordinate a response involving the granting of birthright state citizenship. To protect basic US constitutional rights, they should be prepared, as a last resort, to issue a “True United States passport” operative within the geographic boundaries of those states that join in, and guaranteeing protection of status and social benefits to any state-born child of immigrant residents. That wouldn’t be sedition; that would simply be the states following the US Constitution rather than the illegal Führerprinzip that Trump now seems to advocate in its place.

Let California and other progressive states dare the US government to come into our communities and illegally try to strip our neighbors and friends of their constitutionally guaranteed citizenship.

For short-term political gain, Trump-the-demagogue is stoking a potentially vast constitutional crisis. Our democracy itself is now very much on the line. We must meet that challenge head on.