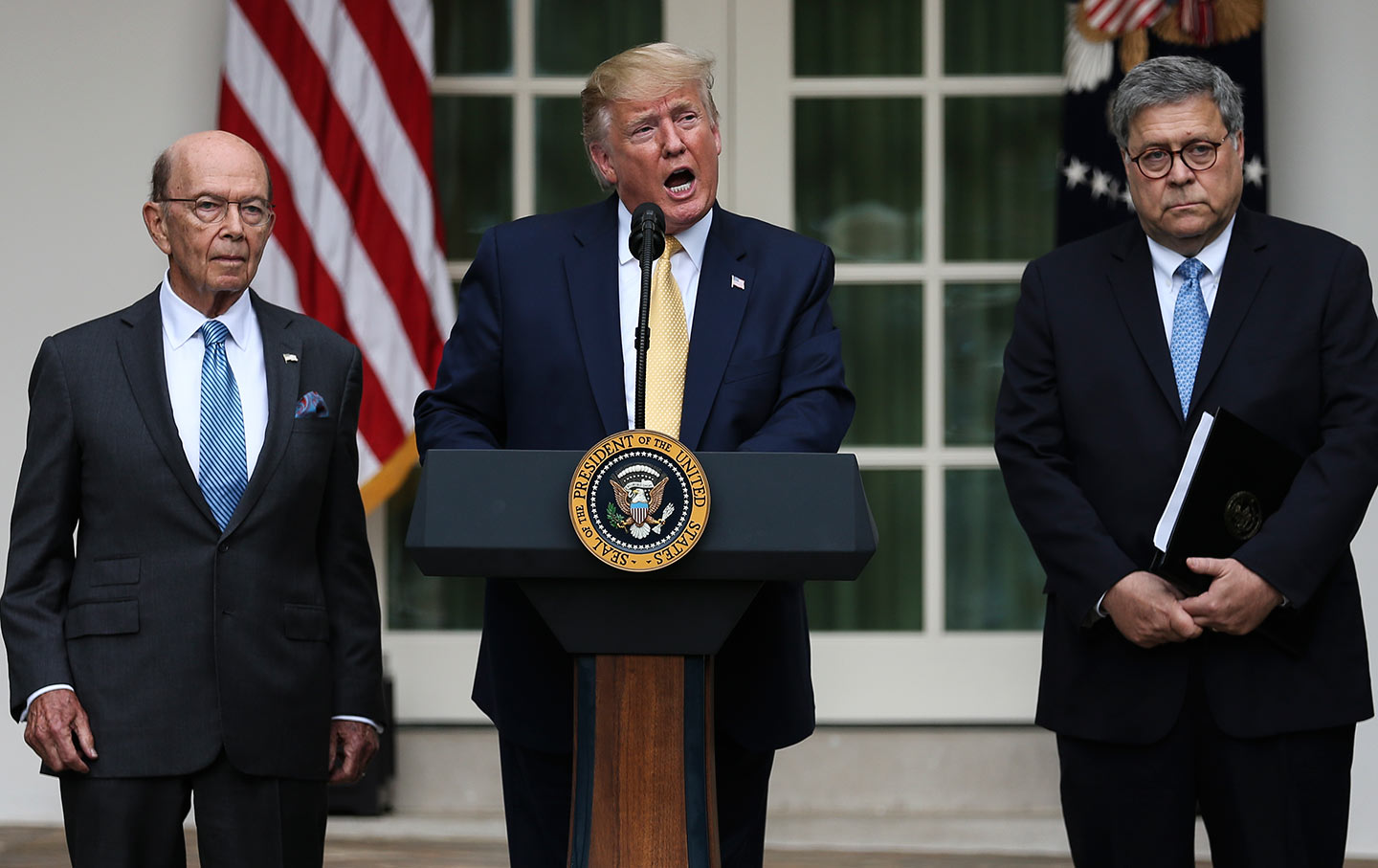 On June 27, the Supreme Court blocked the Trump administration from adding a citizenship question to the 2020 Census. Thus far, it is the only time the Supreme Court has directly prevented a Donald Trump policy from going forward. Yes, lower courts have blocked Trump’s arbitrary and capricious “law-making via Twitter” like he’s a creepy dude trying to slide into their DMs, but this was the first time the Supreme Court, and Chief Justice John Roberts specifically, rebuked the president in writing.

How would Trump react? Well, for the last two weeks Trump has once again walked the country up to the edge of a full-blown constitutional crisis. From the moment the decision came down, the president of the United States has threatened and promised to violate an order from the Supreme Court, testing and probing to see precisely how that order might be violated, and treating the rule of law like an index card Roberts dropped off in the White House suggestions box.

And then, yesterday, Trump capitulated. In a Rose Garden speech, he said he would stop trying to put the citizenship question on the Census, but avowed that it is still very important to know how many noncitizens are living in this country and “ordered” Commerce Secretary Wilbur Ross—whose agency oversees the Census—to find other means of attaining that information.

It’s worth pausing for a moment here to mention that we already have this information. Approximately 22.6 million noncitizens reside in the United States, plus or minus 100,000. I received this much-needed information from Google. Google divined it from… the US Census Bureau, which is fully capable of putting a reasonable estimate on this, via the American Community Survey, without the aid of a specific Census question. Trump’s entire thesis for needing a citizenship question on the Census has now been solved. You’re welcome, America.

Now that this crisis has passed, Trump expects us to move on to his next manufactured emergency. We will inevitably oblige him, but before we do, we should stop and understand all the ways Trump tried to violate a Supreme Court ruling—his many feints and maneuvers—because we can assume that he will try it again should the Court displease him in the future.

While it might not have been obvious to non-lawyers at first, the Supreme Court’s ruling, written by Roberts, devastated the administration’s argument. Roberts ruled that Trump could put the citizenship question on the Census, but only if the Trump administration offered a legitimate and truthful reason for doing so. It was a bit of fancy legal footwork, but it had real teeth. Asking the Trump administration to return to the district court where the case was originally heard to offer a legitimate reason to ask the citizenship question put Baby in the corner, because the government has no legitimate reason for asking that question on the Census.

And Roberts knew it. Documents seized from the (now dead) Republican strategist Thomas Hofeller showed that the “truthful” reason for adding the citizenship question was that Republicans thought it would be “advantageous to Republicans and non-Hispanic whites.” Roberts knew the government did not have time to go back and invent an entirely different-but-still-legitimate reason to cover up their inconvenient truth.

The timing of when the Census needed to be finalized is the other corner Roberts boxed the Trump administration into. The Commerce Department (which oversees the Census) argued, forcefully, that the Census questions needed to be locked in by June 30. It was that argument that caused the case to be fast-tracked through the judicial system. The fact that the Supreme Court was even in a position to rule on the case is because the case skipped the Circuit Court of Appeals, at the Commerce Department’s request, because of the “emergency” timeline required by the department. For the government to continue to try to push the citizenship question forward, it would have had to admit in court that it was lying all along about when the Census needed to be finalized. Lawyers get sanctioned for those kinds of shenanigans.

The Commerce Department was out of time and out of options, and appropriately started the process of dropping the Census fight. But then Trump got involved—via Twitter, of course:

The News Reports about the Department of Commerce dropping its quest to put the Citizenship Question on the Census is incorrect or, to state it differently, FAKE! We are absolutely moving forward, as we must, because of the importance of the answer to this question.

This tweet is a direct challenge to the Supreme Court’s authority, and it’s not okay. It’s not normal. It’s not respectful of the Court, the Constitution, or the rule of law.

Wiser people, the ones among us who don’t waste time wondering if Trump is presidential enough, already knew that Trump wouldn’t respect a Supreme Court opinion against him. Instead, the question was always: What Trump would do about it? We now have an answer to that question, and that answer is terrifying.

We’ve seen that Trump’s first instinct was to ignore the Court and just “move forward.” After that, it would appear his lawyers scrambled for a week, trying to figure out a way to comply with Trump without lying to the Court about the time needed to finalize the Census. When his lawyers couldn’t come up with such an impossible solution, Trump tried to fire all his lawyers. He trotted out Attorney General William Barr to announce that he was removing all the lawyers from the case and replacing them with new ones. A court blocked that attempt: Again, the core concept that you have to have a legitimate reason to do something is entirely lost on Trump.

How Does Donald Trump Keep Getting Away With It?

And then Trump mentally fondled his favorite toy, the executive action. He contemplated adding the question via executive order, which has been his most reliable tool to effectuate his perversions.

Does the president have the authority to overrule a court order via executive action? In a country of laws, no. In a military dictatorship, absolutely. We don’t live in a military dictatorship, of course, but it’s worth pointing out [sips tea] that the president is the commander in chief of the armed forces. If Trump orders people to put the citizenship question on, and those people are cowards, and they don’t have their own armored-tank division buttressed by close air support to stop him, then, theoretically, Trump can do whatever he wants.

That Trump ultimately decided to holster his weapon is of cold comfort. Like a cat burglar casing a joint, Trump keeps checking the security system of our democratic self-government for weaknesses. He got one ruling he didn’t like, preventing him from asking a question his government already knows the answer to, and he went from zero to “let’s maybe scrap the entire constitutional system of government” in two weeks.

People like feting John Roberts as some sort of “institutionalist,” but we should remember that institutionalism can also be a euphemism for “saving your own institution’s ass, no matter the cost to others.” If an arsonist comes to burn down your house, a perfectly rational, institutionalist response is: “But there are other houses, more flammable than my institution!”

If Roberts perceives Trump as a madman willing to burn down the authority of the Supreme Court if he doesn’t get his way, Roberts might rationally respond by simply giving Trump his way. Roberts is here until Roberts dies. Trump is only here for another two, maybe six years. Roberts might perceive that the best way to save the Supreme Court is to let Trump win, for as long as he holds power.

The Supreme Court has arguably made this kind of self-preservation decision before. Everybody remembers Franklin Delano Roosevelt’s court-packing plan as a “failure.” Roosevelt proposed adding 15 judges to the Court, because the Court was blocking New Deal programs. The proposal was never taken up by Congress, and Roosevelt lost political support because of it. But the Court stopped blocking New Deal programs. Scholars still debate this, but if you’ve ever heard the phrase “a switch in time saved nine,” that’s referring to Justice Owen Roberts (no relation, I think) somewhat magically switching his positions on a few key issues after Roosevelt threatened to pack the Court.

I don’t think Trump was trying to threaten Roberts these past two weeks. That would require a level of strategic thinking that Trump has not yet mastered. But a rabid dog does not have to be self-aware to make you afraid.

Trump has shown a willingness to burn it all down. Roberts has long shown an aversion to fire. There are a lot of people reacting to the Census “win” as a triumph of institutions over Trump. But I’m reminded of King Pyrrhus of Epirus, who once said: One other victory and we shall be utterly ruined.