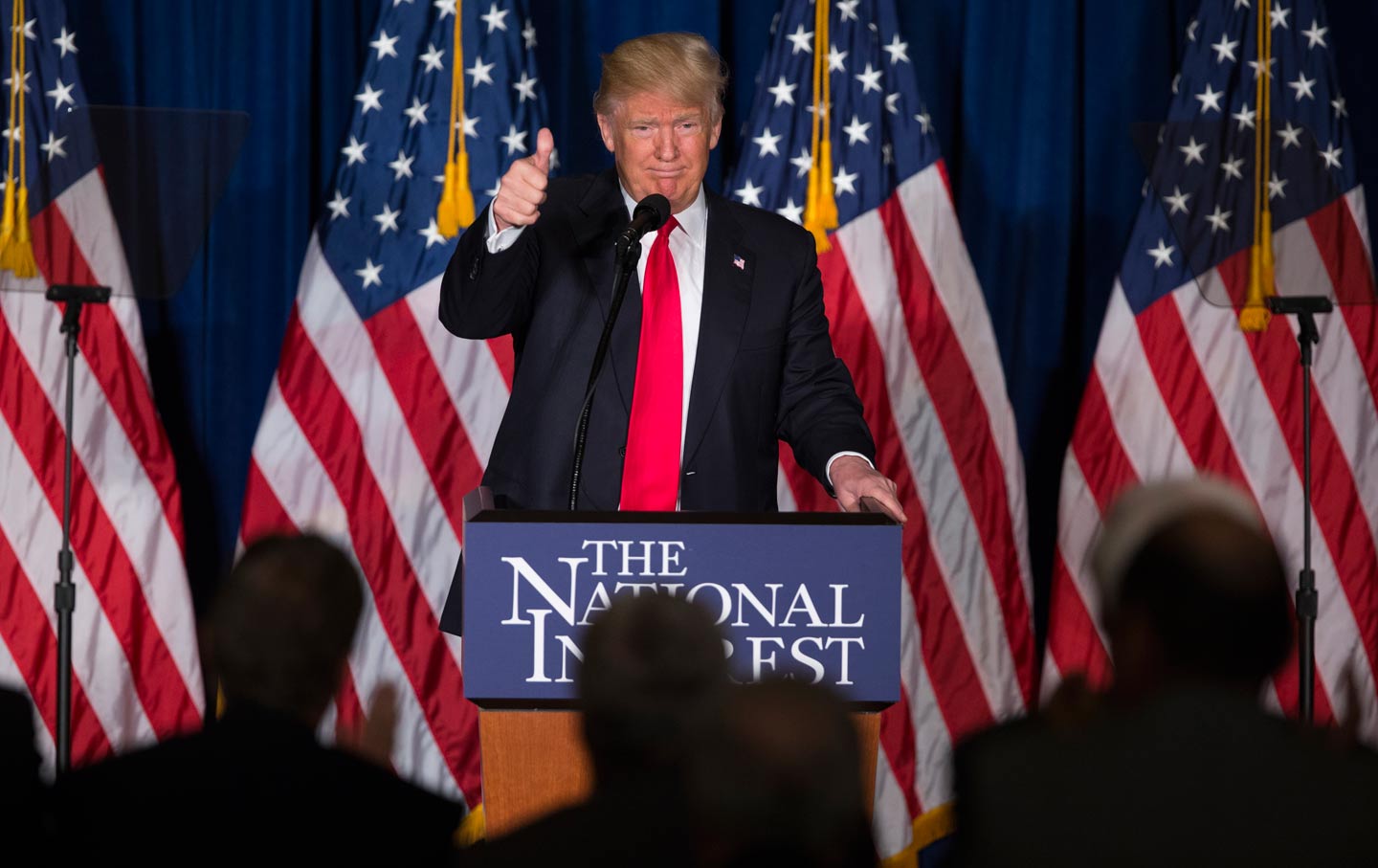 This afternoon, Republican presidential front-runner Donald J. Trump, fresh from Tuesday night’s triumphant showing in which he convincingly won five out of five Northeastern states, gave what was billed as a major foreign-policy address at the Mayflower Hotel in Washington, DC. Trump’s appearance was sponsored by what many rightly consider to be a citadel of American realpolitik, the Center for the National Interest, a DC-based think tank that bills itself as “America’s Voice for Strategic Realism.” It is rumored that Trump’s speech was initially drafted by the Center’s Richard Burt, a respected former ambassador to Germany under Ronald Reagan.

Prior to the speech, the Brookings Institution’s Thomas Wright observed that the involvement of the center indicates that “We may be seeing some early dating between the realists and Trump to see if a lasting relationship is possible.” Perhaps. But at a minimum it was expected that Trump would attempt to appear more statesmanlike, if not walk back many of his more outrageous and inflammatory foreign-policy comments, such as his recent boast that he would bring back waterboarding “and make it tougher.”

Did the Mayflower gambit pay off? Well, not quite.

A mellower (or just plain tired) Trump took the stage about a half-hour behind schedule after an introduction by former UN ambassador, under George W. Bush, Zalmay Khalilzad. In a bit of deft pandering to his hosts, Trump almost immediately took aim at the Obama administration’s record of liberal interventionism. According to Trump, the administration’s reliance on democracy promotion as a tool of US foreign policy has been nothing short of “a complete and total disaster.” Citing the failed adventure in Libya, Trump accused the administration of habitually tearing up existing institutions in the Middle East, then being surprised by the chaos that ensues.

The centerpiece of Trump’s presentation was a series of five criticisms of American foreign policy as it has been carried out of late. To those familiar with Trump’s standard stump speech, the litany was awfully familiar: We are overextended. We don’t win anymore. Our allies take advantage of us. Obama is bad to our friends. He bows to our enemies.

When Trump did try to leave the comfort of cliché for the terra incognita of policy, he fared about as well you’d expect: badly. While noting correctly that nuclear weapons serve as the cornerstone of our deterrence posture, Trump declared that the American nuclear arsenal is “desperately” in need of modernization. Perhaps Trump (or, alarmingly, his advisers) are unaware that in 2015 Obama announced a $1 trillion dollar plan that, according to the Arms Control Association, aims to “rebuild all three legs of the nuclear triad and their associated warheads.”

Trump blasted the administration’s decision to “abandon missile-defense programs with Poland” without seeming to realize that last April Warsaw announced it awarded an $8 billion contact on missile defense to Raytheon. Nor did he seem cognizant of the newly announced European Reassurance Initiative, a $3.4 billion program that will, among other things, fund a “persistent rotational presence of air, land, and sea forces in Central and Eastern Europe for training.”

And what would be a major foreign-policy address in Washington without a mention of Israel? Trump declared that President Obama has “not been a friend” to Israel, even though Israeli Prime Minister Benjamin Netanyahu—no fan of Obama—said in March 2013 that the president has supported Israel’s right to exist “more than any other president.”

Later in the speech, perhaps unintentionally evoking Nixon’s “madman theory,” Trump declared that, as regards foreign relations, “we have to be unpredictable.” This, and much else besides, raises the question: Who’s advising this guy? It would be hard to believe, given the content of the speech, that the realists of the National Interest are informing Trump’s foreign-policy vision.

Yet it wasn’t all terrible.

Trump quite correctly noted that NATO allies are basically a group of free riders. Only four of 28 member states are spending the agreed-upon 2 percent minimum of GDP on defense. He also rightly castigated President Obama and Secretary Clinton for pursing policies that have further destabilized the Middle East.

Notably, he declared that “we are not bound to be adversaries” with either Russia or China. Relations with the two great powers should be “based on shared interests.” Trump noted that one of those shared interests is fighting terrorism; Russia, he said, “has seen the horror of Islamic terrorism.” The idea that the United States and Russia actually have some common interests must have cheered the Russian ambassador, Sergei Kislyak, who was watching from the front row.

Nevertheless, the speech was, on balance, a confused and muddled effort. And yet, what does it say that it was less hawkish than anything the presumptive Democratic nominee has said on foreign policy thus far?