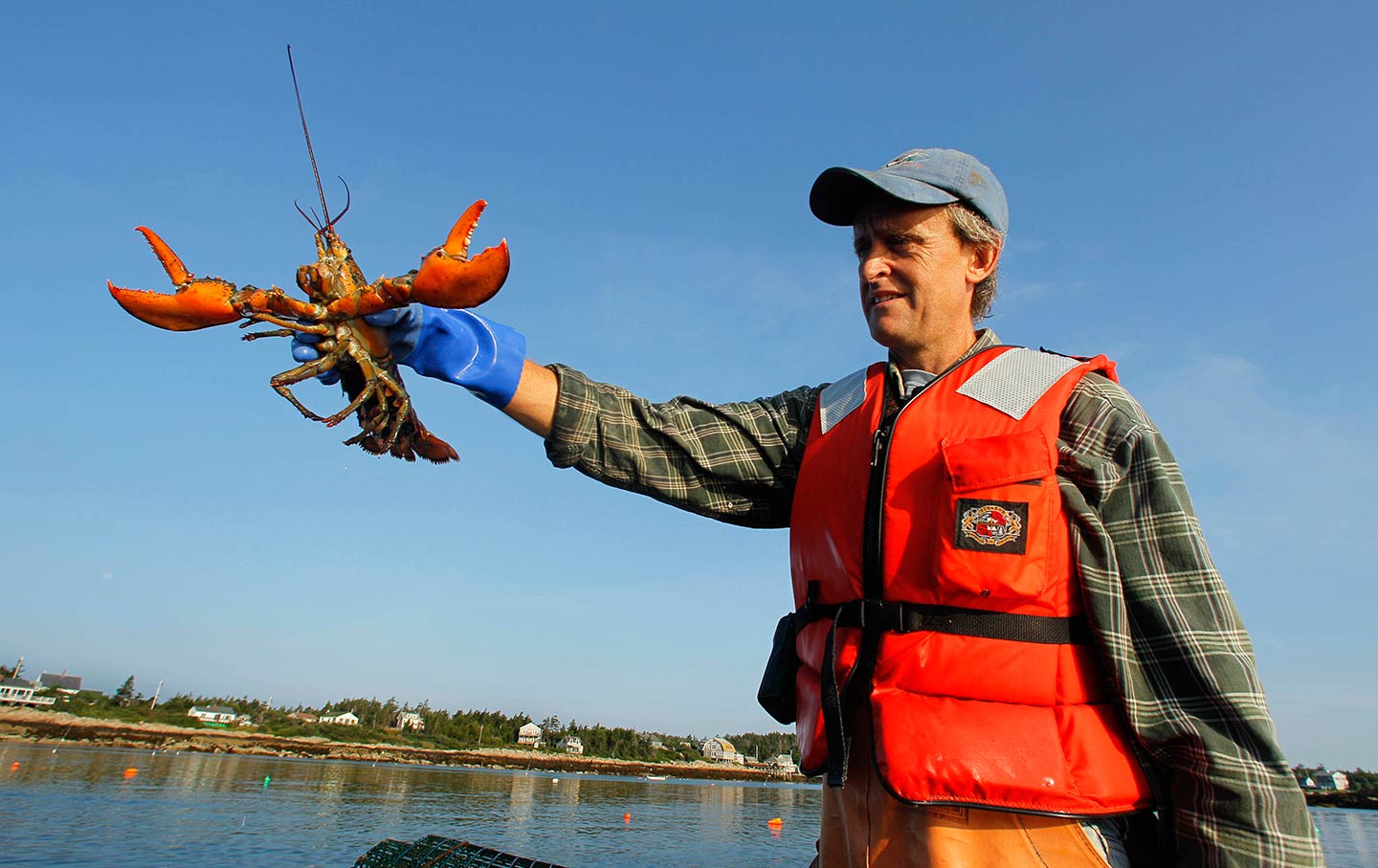 On a recent Saturday, a small outboard motorboat glided to a halt in the glassy waters just off the coast of Rockland, Maine. Idling next to a striped buoy, the fisherman began to pull up the line beneath it, a cage dangling with seaweed eventually emerging from the water. There was no lobster inside that trap, so he replaced the bag of herring bait and moved on to the next. He stopped the boat, pulled up the line, checked the trap, and grabbed the lobster that was inside, only to toss her—a female carrying eggs, which are illegal to keep—back into the water.

The rocky Penobscot Bay, an island-dotted finger of water that cuts into Maine’s midcoast, is where around 90 percent of American lobsters are caught. There are around 4,500 licensed lobstermen in Maine, with boats like the small outboard hauling up a handful, or larger ones fishing as many as 800 traps. The lobsters that scuttle into their cages add up to one of the most valuable fisheries in the United States; last year, lobstermen hauled in nearly $434 million worth of shellfish, and the greater industry contributes $1 billion annually to the state economy.

For some coastal communities, including those on many of Maine’s offshore islands, lobstering isn’t seen as a good way to make a living; it’s the only way. That livelihood is now under threat: In September, the New England Fishery Management Council moved to cut the herring catch that lobstermen rely on for bait, and National Oceanic and Atmospheric Administration findings that endangered right whales are dying after becoming entangled in fishing gear (as well as following boat strikes) have many talking about significant changes. The increasing temperature of the Gulf of Maine, which is warming more quickly than any other stretch of ocean in the world, is pushing the fishery ever northward—and into Canadian waters.

And then there’s the trade war President Donald Trump started with China. Across the country, from Maine’s islands to soy- and corn-farming towns in central Iowa, higher tariffs have made rural communities across the country experience more economic anxiety than positive national indicators might suggest, since the export markets that their industries rely on have been upended. As the midterms approach and 2020 looms large, Trump’s action on trade may even end up being a liability. The US Department of Agriculture announced in July that it would spend up to $12 billion to alleviate the hit farmers are going to take on their crops this year—a move that Scott Faber of the Environmental Working Group likened to a vote-buying scheme. Still, even that might not be enough to stave off a political backlash over the trade war.

After Trump announced new tariffs on $34 billion worth of Chinese goods in early July, Beijing retaliated with a host of its own tariffs, including a 25 percent tariff on lobster, as well other commodities related to food, like pork and soybeans.

As a result, Maine’s lobster exports to China plummeted 64 percent in July over the previous two months. The Maine Lobstermen’s Association, a trade group that represents those working on lobster boats and not elsewhere in the supply chain, declined to comment on the tariffs, citing good prices at the dock. But things look different at the Stonington Lobster Co-op, where the 80-boat fleet hauls in more lobster annually than any other dock in the state.

Prices were good through the summer months, which is Maine’s peak season for both lobstering and lobster-roll eating. Still, co-op manager Ronnie Trundy, who spent some 35 years out on water, said that with many local restaurants closing up for the winter, the number of buyers he has narrows drastically. “We’re going to start feeling the effects of it, sure,” he said of the tariffs. “It’s not a good situation at all.” It’s anyone’s guess, he said, what the drop in exports means for lobster prices—but it’s not likely to be a good winter.

“It’s political,” added Trundy. “This is what’s driving it. It’s all political. They don’t stop to think about what they’re doing to people’s livelihoods.” (Trundy did not cast a vote in 2016; he said that he didn’t like either presidential candidate.)

Away from the dock, lobster dealers have already seen the effect of the tariffs, with business in China—a market that dealers spent more than a decade developing, and cannot readily replace due to its sheer size—drying up almost completely in some cases. “For some companies it will make the difference between being profitable and not this year.” said Annie Tselikis, executive director of the Maine Lobster Dealers Association

What’s more, a recent study found that the lobster supply chain is more complicated than previously understood, with various countries acting as middlemen between the United States and growing Asian markets. Live lobsters regularly pass through intermediary countries, including Thailand, Hong Kong, and Indonesia, before landing in a Chinese port. These trade paths obscure a Chinese market that is reportedly 19 percent larger than direct-export numbers show—suggesting that a drop in Chinese demand could in turn have a far larger impact on the industry than might otherwise be expected.

Tselikis has been working with Maine’s congressional delegation to limit the damage, but if there is bipartisan support for the lobster industry, state Republicans look like they will take a hit in November. Maine’s Second Congressional District, which voted for Democrats in every presidential election from 1992 to 2012, went for Trump in 2016, and has been represented by Republican Bruce Poliquin since 2014. But in recent polls, Poliqiun’s challenger, Democrat Jared Golden, has pulled ahead. Statewide, independent incumbent Senator Angus King is leading his three-way race against Republican Eric Brakey and DSA-endorsed Democrat Zak Ringelstein, while Democrat Janet Mills is polling eight points ahead of Republican Shawn Moody as they seek to succeed Paul LePage as governor.

Lobster is just one story of the trade war. There are nearly 200 seafood products on China’s list of retaliatory tariffs—not to mention all of the other agricultural products that are affected.

So far, it seems to be in the farming-reliant Midwest states—Iowa, Nebraska, Minnesota, and Kansas—that the political fallout over tariffs could be the most damaging for the Trump administration. The price of soybeans—for which China is the number-one export market—has declined 20 percent since tariffs were announced in July, and the government has responded accordingly with the bailout program.

“This came at a time when farmers had already been experiencing dropping incomes for five years,” said Aaron Heley Lehman, who farms 550 acres of corn, soy, oats, and hay, in central Iowa, and is the president of the Iowa Farmers Union.

“One commodity that we were breaking even or maybe even making a little bit of money on was soybeans. The last crop that was making us some money was put at the front of the trade disputes.”

There were plenty of trade concerns that predated Trump’s conflict with China, and a 2016 Rasmussen poll found that half of voters thought NAFTA should be renegotiated, with more Republicans and independents saying they were critical of free-trade deals than Democrats. But farmers, along with farm groups like the National Farmers Union and the more conservative Farm Bureau, wanted reform—not war. “I think there was a general sense of frustration about the plight of our rural communities that was tapped into by politicians in the past two elections,” said Lehman, “but we’re not seeing that translate into effective policies.”

The bailout cash was welcomed by many growers, with 40,000 applying to access the emergency funds. Even Iowa’s Republican Senator Charles Grassley filed paperwork to receive a payout for his farm.

Scott Faber, who tracks various farm-subsidy programs for EWG, pointed out that many growers will be paid for that loss through the subsidized crop-insurance program, which is based on a loss of revenue, not the actual loss of crops due to natural disasters.

“Farmers have tended to come more and more likely to vote Republican because of cultural issues, not because of the farm safety net,” said Faber. But even with the bailout, “the tariffs are sort of testing their loyalty. It’s a huge gamble, and it’s one where the president is following an inclination to doubling down…. at some point, farmers are going to say, you’re jeopardizing these markets that we’ve taken a generation to build.”

“I can tell you that there’s anxiety among farmers and in our rural communities that we haven’t seen in many, many years,” said Lehman. “Now, how does that translate to a midterm election, where the president isn’t on the ballot? It’s really hard to tell. It’s just a very unpredictable political situation.”

Recent polling shows Democrat Fred Hubbell just ahead of Kim Reynolds, Iowa’s Republican governor, and Democrats are either ahead or trailing by just a few points in all four House races in the state—including Representative Steve King’s fourth district, where challenger J.D. Scholten, who has spoken out against the trade war, is now within a single point of King, who is running for a ninth term.

“I don’t understand what the long-term game is here,” said Scholten, who noted that two ethanol plants in Iowa have been idled as a result of the trade war. “If we’re not in the Chinese market with our soybeans and our pork, it’s going to be devastating.”

Beyond the November midterms, there are lingering economic issues in rural communities that need to be addressed. “Our industry has almost been put at the forefront of disputes with other countries,” said Lehman, adding that the resulting pressure is showing in numerous ways, such as calls to stress hotlines, and accounts of confrontational meetings between farmers, elected officials, and bureaucrats. “What we’re seeing is people who were already pretty frustrated and were looking for answers, and now experiencing even more economic pain.”